Ban Pin train station in Long district of Phrae is home to a prominent building with distinctive, foreign-influenced architecture. (Photo by Parinya Chukaew)

Parinya Chukaew is using social media to take on the establishment in hope of saving up to half of the nation's 400 ageing railway stations. They are slated to be razed but he argues they must be conserved as part of Thailand's cultural and architectural heritage.

Some have been torn down already but Mr Parinya, who teaches architecture at King Mongkut's University of Technology Ladkrabang, is campaigning to stop the remainder from being wiped out by modern rail development projects.

"There are about 400 old stations across the country. Half of them are really worth keeping. However, the State Railway of Thailand [SRT] has no plan to conserve any of them. The agency said it has no budget for such conservation work," he said.

"That is awful. Frankly, I could accept it if we had to lose 60 or 70 stations in exchange for such development, but not all of them," he added.

The academic said he realised two years ago that all of the stations, some of which are more than a century old, would soon be gone as the state has decided to press ahead with its double-track rail development plan without any idea of how to keep the buildings steeped in historical value from the bulldozers.

Since then he has posted many photos online of eye-catching wooden stations, those most at risk of being torn down, and piles of materials from ones already demolished. He also conducts study trips with students and engages local communities in the conservation work. 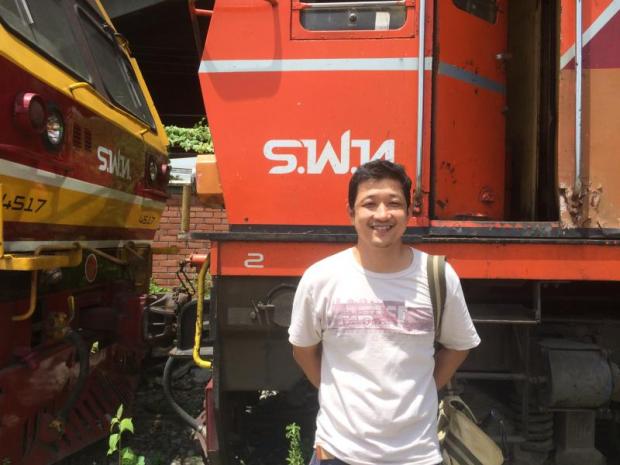 Parinya Chukaew campaigns for the protection of old railway stations threatened by the development of double-track rail projects.

During the trips he employs a technique known as vernadoc (vernacular documentation), which he said has proven helpful in boosting awareness. This drawing technique uses pencils, pens and ink to record all the details seen with the naked eye including shadows and dimensions to render an object lifelike.

He said he hopes this kind of fieldwork and measurement will inspire building owners, as well as people in the local community, to realise the value of their property as perceived by outsiders ultimately leading them to cooperate in conserving the structures.

The public was slow to respond at the beginning of the campaign, he said. But the turning point came around April this year as the contractors of the route linking Chira Junction to Khon Kaen in the Northeast were about to start their work. The 187-kilometre extension spelled the end of the road for 15 old stations along the route linking Nakhon Ratchasima and Khon Kaen.

As such, Mr Parinya intensified his campaign. He said it was well-received by local communities and netizens but the SRT gave only a lukewarm response and his petitions never reached the top decision-makers.

His message is clear and simple: The conservation of old stations is practical, possible and not expensive.

Given that most of these stations are made of wood, dismantling and relocating them is quit 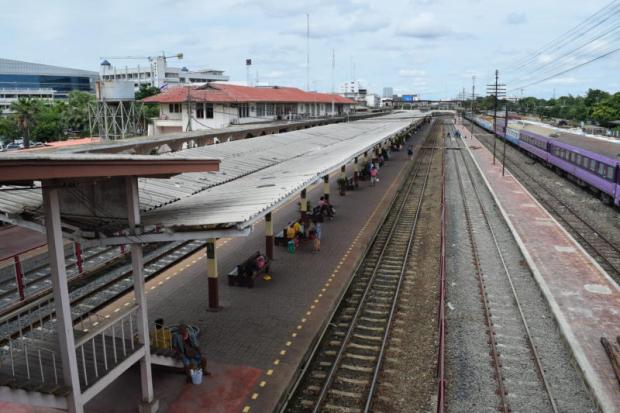 Nakhon Ratchasima station, one of the main inter-provincial train interchanges, is slated to be the site of a high-speed train project. left  Ban Pin train station in Long district of Phrae is home to a prominent building with distinctive, foreign-influenced architecture. photos by Parinya Chukaew

e easy, he said, adding that it would be in the region of 1 million baht per building.

"Finding 200 million baht [for 200 stations] is not that big of an ask, especially in the context of a project worth several hundred billion baht like the double-track railway project," he said.

Removing the old buildings from the extended route may seem to be the most practical measure under the present circumstances. But the best way forward, according to Mr Parinya, would be to design the new buildings in harmony with the old structures -- which is standard practice for most advanced countries. However, that would require an investment of both time and money, he said.

The SRT could help by permitting conservationists to access the station sites and go ahead with their preservation efforts, he suggested.

But the local administration would have to provide a budget for this, he said, lamenting the lack of policy geared toward preserving the past.

Those wishing to conserve the station buildings have had to seek permission on a case-by-case basis, and those requests take time to process, Mr Parinya said. 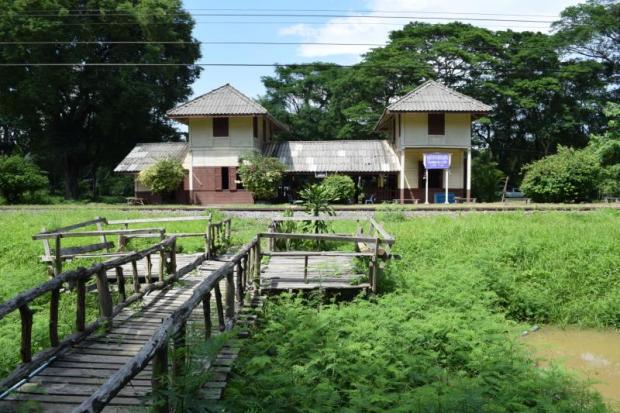 The twin buildings at Mae Phuak train stop in Phrae's Den Chai district have survived the threat of demolition. The local community has rallied to protect the buildings, which are over a century old. They now also serve as a museum and learning centre.

Thanks to his campaign, some of the 15 doomed stations have been saved.

Meanwhile, Khon Kaen University showed what is possible by getting the SRT on board to guarantee the survival of the province's main station, which many considered under threat due to its age.

Sung Noen station is another site that has been spared from demolition.

According to Mr Parinya, a senior military officer came to the aid of Sung Noen Station. The officer had his subordinates dismantle the structure and rebuild it on a new site in a specially arranged landscape.

Those efforts are "praiseworthy but piecemeal", he said.

Most vulnerable to demolition are the smaller buildings, which are mostly used by locals. Others, like Songkhla station, which is registered as a national architectural site, are on the preservation list and thus guaranteed not to be knocked down.

Mar Parinya said removing the structure is only the first part in the conservation journey and the project requires a long-term commitment. 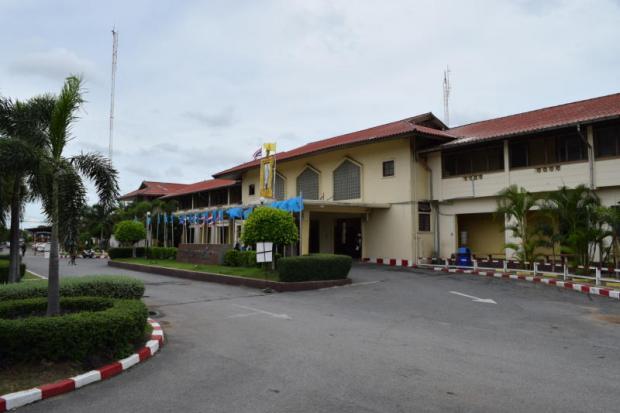 "Those involved must figure out how to take care of the [stations] in the long run, who will take care of them, and where the money to finance the conservation will come from," said the academic.

If well planned, a project like this could even generate income for the community, he said. Efforts would pay off when the conserved buildings are put to use -- as community meeting halls, offices of local administration or as local libraries, he added.

"It is useless to remove a building and just let it rot. No one will want to keep any building and the SRT would say 'I told you so'," the academic said.

Nonetheless, there are an encouraging number of successful precedents.

Among them is Tha Phra station in Khon Kaen, with the relocated structure to serve as an attraction for the renovated market nearby, he said.

In addition, a team of consultants working on the Chira Junction rail route in Nakhon Ratchasima has extended its conservation work to cover more than 20 stations along the route, which stretches to Map Krabao in Saraburi's Kaeng Khoi district. 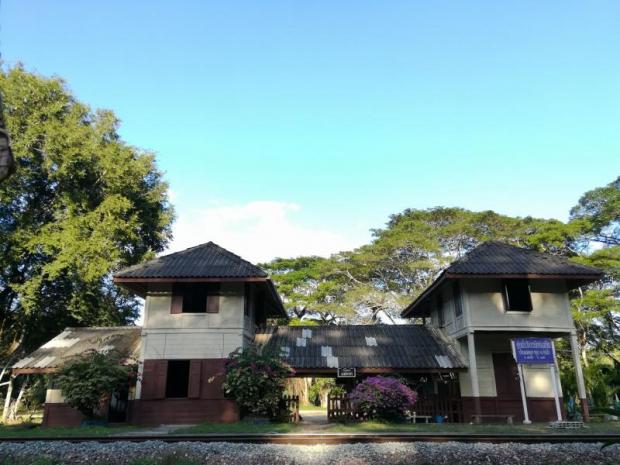 Mr Parinya said he was heartened to see local administration agencies start playing an active role in the conservation work, including those in Chumphon's Sawee district.

Another highlight is the Mae Phuak train stop in Phrae's Den Chai district, which the local community has rallied to protect. It was downgraded from a "train station" to a "train stop" but bears distinctive architecture and dates back to the reign of King Rama V.

Two-storey twin wooden buildings -- painted in the SRT's signature cream and brown colours -- are conjoined by a single-storey structure. The buildings are still standing because local residents refused to let a historical fixture be torn down, Mr Parinya said.

Once a month the locals sweep the grounds of the station. The buildings now house a museum, which doubles as a learning centre highlighting how life in the community looked over the ages. The walls show old photos of families and vintage utensils.

Normally, station buildings that are of little or no use are destined for demolition to avoid the cost of maintaining them. But the case of Mae Phuak provides clear proof that budget need not be a constraint if the community takes action, conservationists say. 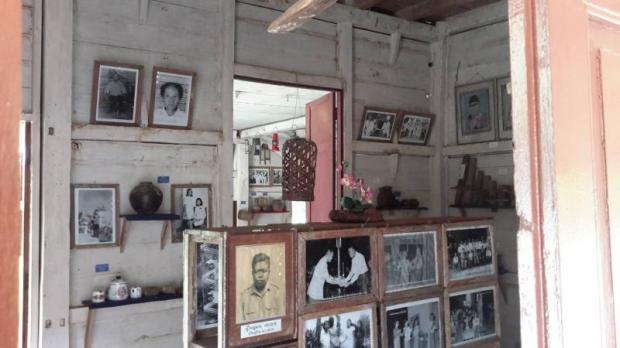 These days only one train stops at Mae Phuak, which was granted a conservation award by the Association of Siamese Architects this year for its unique architecture.

But the community leaders remain active, even organising a fundraising event to help conserve the twin buildings.

Now they are working on a tourism plan that would link this stop to the picturesque Ban Pin station, also in Den Chai district,with half-day trips available for those who do not want to stay overnight. The plan is expected to take effect later this year.

Mr Parinya urged other local bodies to follow the example of Mae Phuak and its community leaders, who he praised for their progressive thinking. 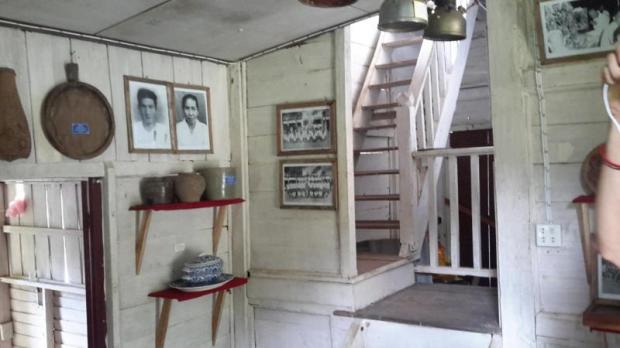