Revolution's legacy back from the brink
Thailand
Special Report

Revolution's legacy back from the brink

Meanings assigned to specific persons and objects change through time. Once they were defined as supreme, then redefined as degenerate and consigned to oblivion.

The Khana Ratsadon and their legacy in modern art and architecture is a case in point.

Yesterday 85 years ago, on June 24, 1932, a group of military officers and civilians named Khana Ratsadon (People's Party) staged a coup against King Rama VII, known as the 1932 Siamese Revolution. The bloodless insurrection ended the absolute monarchy and marked the transition to a constitutional monarchy.

Many factors were involved, including economic problems amidst the Great Depression and dramatic social changes with a growing middle class frustrated at the privileges of the upper class.

Khana Ratsadon introduced the first permanent constitutional law in the same year which formed the basis of Thai democracy.

They determined the "Six Principles" which reflected their goals to maintain sovereignty based on people's power, national security, economic welfare, rights and liberties, equality, and education for all citizens.

The People's Party paved way to the first general election for the National Assembly in 1933. Their members then played important roles in government and modernising Siam to Thailand.

The core principles of Khana Ratsadon was reflected in its architecture and art, which Chatri Prakitnonthakan, associate professor at Silpakorn University's Faculty of Architecture, defines as "the People's Party art".

Buildings were in simple designs, sometimes taking the form of a box. The lavish details which characterised a lot of traditional architecture, which once served only the elite and religious institutions, were toned down or abandoned.

Flat roofs, seen on many buildings along Ratchadamnoen Avenue, were widely adopted. Reliefs of the constitution on a tray - depicting the symbolic moment when the first constitution on a golden tray was handed to King Rama VII to sign - can also be found on buildings.

Symbolic numbers from the Six Principles and the revolution date appear on Khana Ratsadon architecture such as the Democracy Monument, with such numbers determining its proportions and quantity of elements.

The People's Party architecture reflected an ideology to create an equal society with no privileged upper class. Its style can be compared to modern architecture but originating from quite different purposes.

However, the People's Party did not last long partly due to internal conflicts among different factions and differences in political belief.

The 1957 coup led by Field Marshal Sarit Thanarat eventually ended the role of most Khana Ratsadon's member in the country's administration. The then Prime Minister at the time, Field Marshal Plaek Phibunsongkhram -- the military faction leader of the 1932 revolution -- was forced to exile until his death.

The political landscape created by Khana Ratsadon was reversed. Sarit revived traditional royal festivals and ceremonies abandoned after the revolution while persecuting his opponents, who were labelled communists.

Under the new paradigm, Khana Ratsadon was no longer seen as a movement which paved the way for democracy in Thailand, but as a party who brought democracy to Thailand prematurely and caused political instability and set the scene for repeated coups.

Despite their large contribution to the country, Pridi Bhanomyong, Khana Ratsadon's exiled civilian faction leader, was accused of plotting the assassination of young King Rama VIII. He later won all the defamation cases he launched against his accusers. However, he was viewed as a communist due to his proposed radical economic plan.

Chatri argues that People's Party architecture was devalued and isolated from the definition of Thainess -- a term usually associated with traditional architecture such as temples and elegant buildings from the era of absolute monarchy.

Khana Ratsadon buildings were linked to a discredited ideology, marginalised as "art for ideology" -- something not recognised here.

"This led to a stage of oblivion for Khana Ratsadon's legacy despite its origins in an ideology of an equal society, which is a part of Thai history," says Chatri. "Then it went into stage of demolition."

Most of the buildings were not well preserved or regarded as historical objects not worth conserving.

Sala Chalerm Thai, the country's first theatre which was built in 1940 during the administration of Field Marshal Plaek, was demolished in 1989 by the government, which claimed that it blocked the view of royal temples ― Wat Ratchanatdaram and Loa Prasat on Ratchadamnoen Avenue ― while the theatre itself also faced a lacklustre economy. It was once a prosperous venue that could seat an audience of more than 1,200.

The demolition of the old Supreme Court, built in 1939 near Sanam Luang, began amid protests in 2012. Its front displayed six pillars that symbolised the People's Party's Six Principles. The authorities claimed the building risked collapsing due to its old age.

Despite both Khana Ratsadon and its architectural heritage facing being consigned to the dustbin of history, it seems the last decade of Thailand's political turmoil has brought them back to life.

During the red shirt protest on June 24, 2009, protesters gathered at the memorial plaque of the 1932 Siamese Revolution at the Royal Plaza to commemorate "Thai National Day" which was introduced by Khana Ratsadon but then revoked by Sarit after his 1957 coup.

The plaque marks the spot where leaders of the People's Party read a statement declaring the beginning of democracy in Thailand.

Red shirts also used the Pitak Ratthathammanun Monument at Laksi Circle ― erected in 1936 to commemorate the military and police officers who died during the royalist Prince Boworadet-led coup against the constitutional regime ― as a rally point in 2010 to call for elections to oust the government of Prime Minister Abhisit Vejjajiva.

One evening in November 2016, amidst protests, the monument was relocated from its original site by the Mass Rapid Transit Authority, which claimed that the monument's foundation blocked the construction of the Green Line.

In April, the memorial plaque that marked the 1932 revolution mysteriously disappeared, replaced by a new one with entirely different wording.

The incident sparked public outcry over its whereabouts. The Department of Fine Arts later confirmed that the plaque was not registered as a protected antique object.

Some people believe in a conspiracy theory that the gradual disappearance of the People's Party legacy is intended to erase its history. Others claim a less sinister motive, pointing out that such buildings are too old or do not fit the present context.

Whatever the reason, it must be admitted that Khana Ratsadon is part of Thailand's past. And without a sense of the past, we can't have sense of the future. 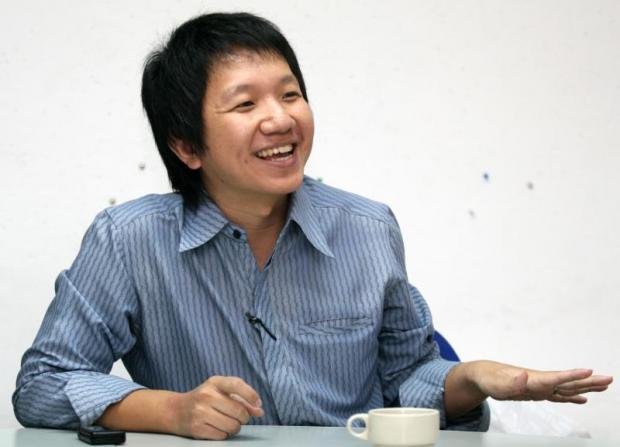 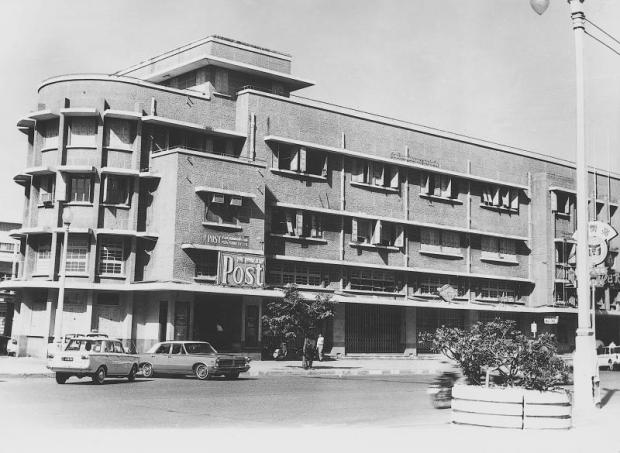 modernised siam: Most of the buildings along Ratchadamnoen Avenue are characterised by simple designs with flat roofs. 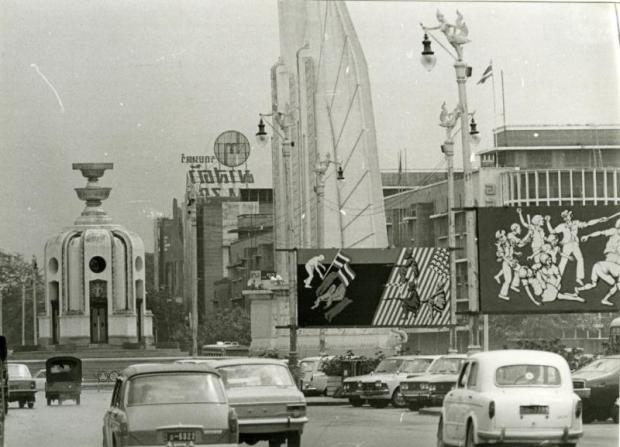 ode to democracy: Symbolic numbers from the People's Party's Six Principles and the revolution appear on the Democracy Monument.