What has happened to Khana Ratsadon's architectural heritage?

Eighty-five years after Khana Ratsadon staged a coup which ended Thailand's absolute monarchy, its architectural heritage faces oblivion. Some buildings have been forgotten. Some have been demolished. Most are not protected by the law. Just like Khana Ratsadon's controversial figures who have been given different accounts of their acts. Chatri Prakitnonthakan, associate professor at Silpakorn University's Faculty of Architecture, a specialist in Khana Ratsadon's architectural legacy, reviews their current status.

Other buildings built after the 1932 Siamese Revolution: 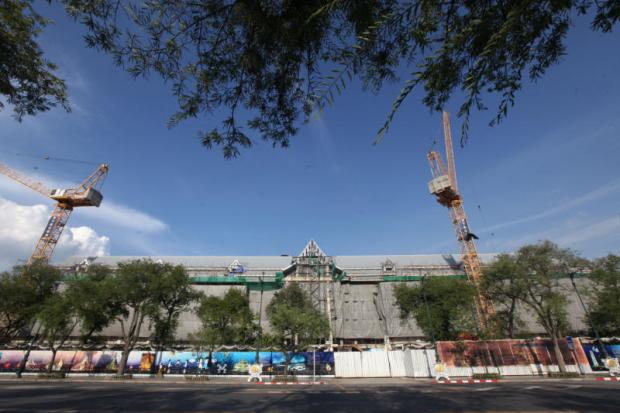 After the defeat of the Boworadet rebellion in 1933, the government built a temporary crematorium for the 17 soldiers who fell in the battle at Sanam Luang, which was previously used for royal cremations. This may have influenced the building of a permanent crematorium for ordinary people at Wat Trimit, near Yaowarat, in 1947. The crematorium was designed by Thai architect Phraphromjit. 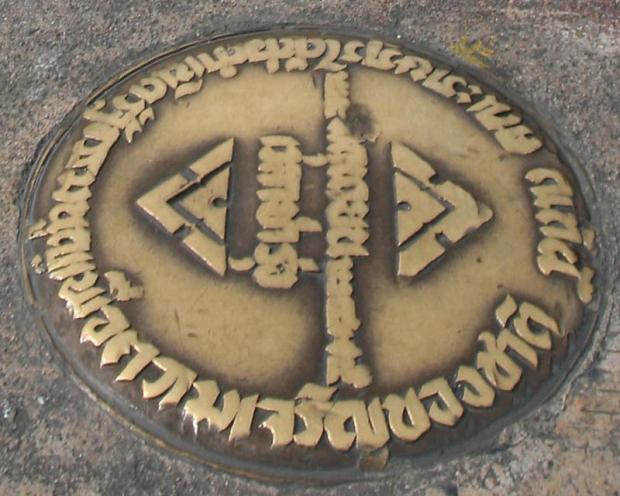 After Khana Ratsadon instigated the Siamese Revolution on June 22, 1932, a memorial plaque was embedded near the equestrian statue of King Chulalongkorn at the Royal Plaza, the spot where People's Party leader Phraya Phahonphonphayuhasena read a statement announcing the dawn of democracy in Thailand. The brass plaque was imprinted with the words: "On 24 June 2475 (1932), at dawn, Khana Ratsadon created the constitution for national prosperity".

Status: Not registered as a protected antique. Mysteriously disappeared in April 2017. It was replaced by new plaque of unknown provenance. 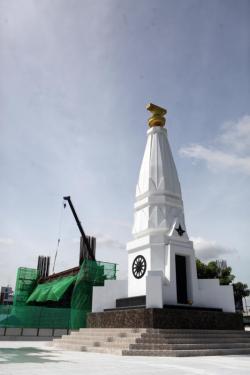 Known as Lak Si Monument, Pitak Ratthathammanun monument was unveiled in 1936 to commemorate the officers who died fighting the rebels led by royalist Prince Boworadet in 1933, in an attempt to reverse the 1932 Siamese Revolution. The battle, which broke at the Bang Khen field where the monument was erected, saw the defeat of the rebels. After the incident, the government built a temporary crematorium for the 17 soldiers who died in the battle at Thung Phra Mane, now known as Sanam Luang, which was previously used for royal cremations only. The monument was a gathering spot for red shirt protesters in 2010.

Status: In 2016, the monument was relocated to a site near the original location as its foundation blocked the construction of the Green Line. 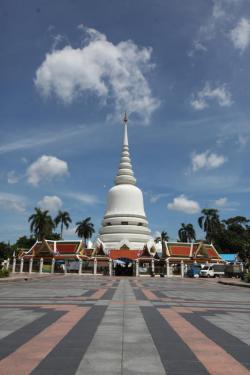 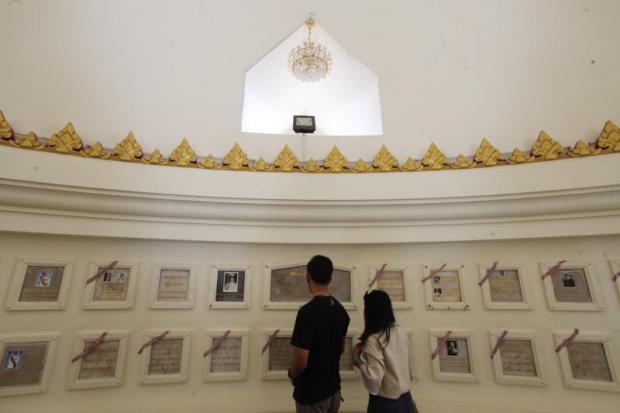 Located in Bang Khen, Wat Prasri Mahadhat Worawihan was commissioned in 1943 by the Field Marshal Plaek Phibunsongkhram government to commemorate the establishment of democracy in Siam. Its initial name was "Democracy Temple", which was changed after relics of the Buddha and the sacred bodhi tree from India were installed in the temple. The simple pagoda was designed by Thai architect Phraphromjit who had a concept to make the pagoda for interment of people making merit for the country, like the Pantheon in France. The pagoda hosts remains of Khana Ratsadon members. Their relatives gather here on June 24 every year in an act of remembrance. 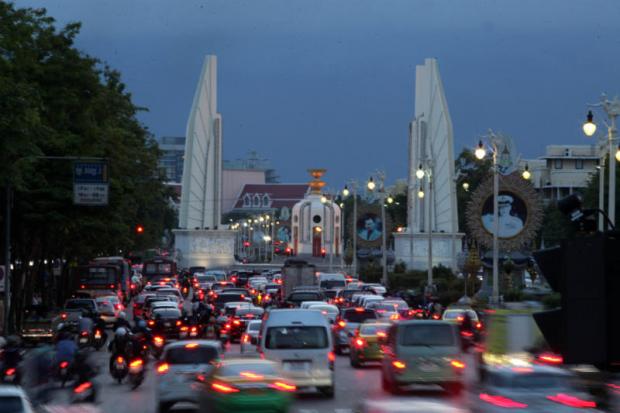 The most popular place for political gatherings, the Democracy Monument was opened in 1940 to commemorate the 1932 Siamese Revolution. The monument was envisioned by Field Marshal Plaek Phibunsongkhram as the centre of a modernised Bangkok. He chaired the opening of the monument himself. The monument's design incorporates Khana Ratsadon's symbolic elements and numbers including the four 24-metre wings symbolising the revolution date, June 24, 75 artilleries surrounded the monument derived from the year of revolution, 2475, and constitution on a tray at the top of the centerpiece.

Status: Fairly safe. It was reported that in the early 1950s, during the era of Field Marshal Phibunsongkhram, the cabinet suggested demolishing the monument. 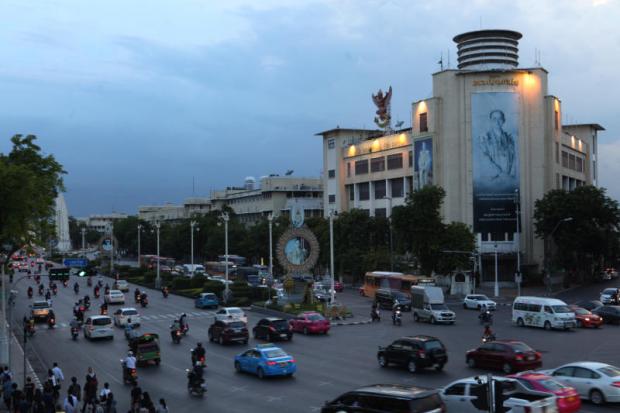 Ratchadamnoen Avenue was commissioned by King Chulalongkorn following his first visit to Europe. It was launched in 1904 linking the Grand Palace to Dusit Palace in the new royal district, terminating at the Royal Plaza in front of the Ananta Samakhom Throne Hall. However, in 1937, Field Marshal Plaek Phibunsongkhram began to develop the avenue by extending its length, erecting commercial buildings, hotels and a department store as well as the Democracy Monument. He envisioned Ratchadamnoen Avenue as the centre of the country's prosperity. 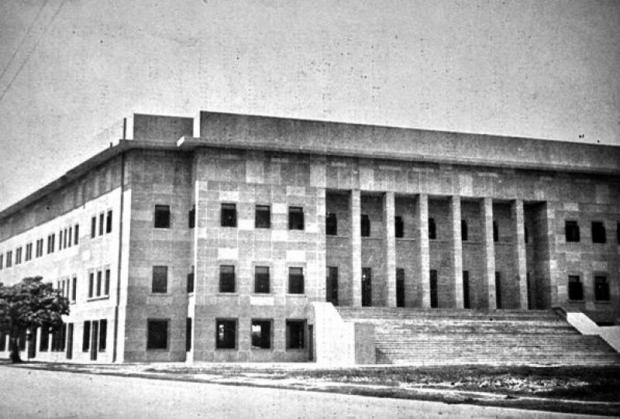 The Supreme Court was part of the Justice Ministry complex which opened in 1941 under the government of Field Marshal Plaek Phibunsongkhram to commemorate Thailand's regaining of juridical sovereignty in 1939, 70 years after the Bowring Treaty. The Supreme Court was built according to People's Party design, with six pillars at the front symbolising Khana Ratsadon's Six Principles.

Status: In 2012, demolition of the Supreme Court was begun amid protests. 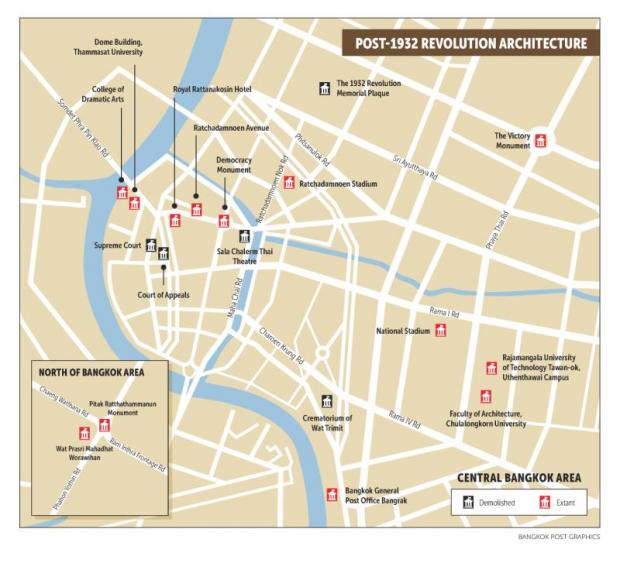