While a newly announced observation tower is projected to be Bangkok's tallest structure, there are plenty of outstanding choices to get a panoramic view of the City of Angels

On a clear day, from the 84th floor of the Baiyoke Tower 2, you can even see the curvature of Earth. (File photo by Pattarapong Chatpattarasill)

Last week, news surfaced that Bangkok will soon be getting a new observation tower.

The project, which has attracted headlines and mild controversy, is to stand on a plot of state land, while the investment will be made by the Bangkok Observation Tower Foundation, jointly formed by private business groups including Magnolia Quality Development Corporation Co, the property development arm of Charoen Pokphand Group and Siam Piwat Co, the operator of Siam Center and Siam Discovery.

With a planned height of 459m, the tower will likely be the tallest building in Thailand upon completion, and will arguably be among the top 10 tallest towers in the world. The observation deck will be situated close to the 360m mark, and will provide a 360-degree view of Bangkok and the Chao Phraya river, while also housing an exhibition of the late King Bhumibol's many achievements. Tickets are projected to cost 750 baht per foreigner, and about 50% less for Thai people. Authorities hope that the tower will become yet another attraction for tourists visiting the capital.

But while the observation tower will no doubt be the first of its kind in Bangkok, many argue that the City of Angels has no shortage of tall buildings, with plenty of existing structures and/or locations already offering great bird's-eye views of the city (a glass of wine at one of the rooftop restaurants costs a lot less than the planned 750 baht fee). Here are some examples of several buildings, hotels and other structures you can go to right now for a look at Bangkok from above. 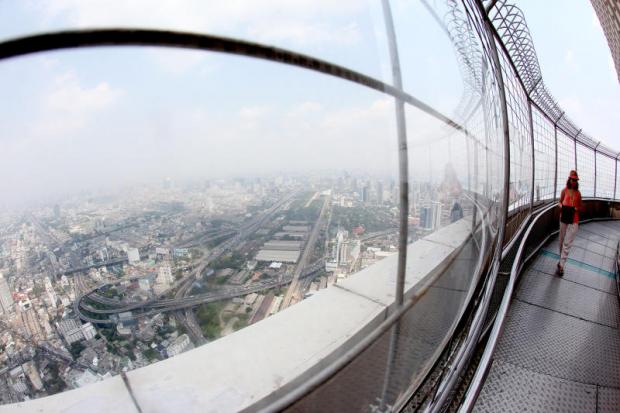 View from the roof deck on the 84th floor of Baiyoke Tower. Photo: Pattarapong Chatpattarasill

While no longer the tallest building in Bangkok, at 309m tall, Baiyoke Tower is still the tallest hotel in the country. It has long been one of the best places to get a view of Bangkok from on high, thanks to its famous Rooftop Bar located on the 83rd floor (from 86). There is also a 360-degree observation deck on the 84th floor, with a walkway that goes all around. Visitors can get a full view of Bangkok all the way to the Gulf of Thailand on a good day, while the lights of the nearby CentralWorld and Siam areas light up the night. Those who only wish to go up to sight-see on the observation deck can do so from 10am to 4pm everyday for 350 Baht, while visits after 5pm cost 400 baht, but come with a free cocktail at the bar. Those who plan to dine at the hotel's many restaurants can also enjoy the view for free. 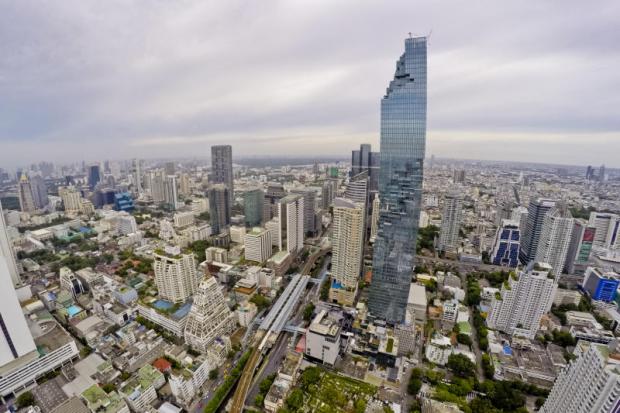 Having finished construction just last year, the MahaNakhon Tower is currently Bangkok's tallest structure, with a height of 314m. It is home to the Ritz-Carlton Residences, the most luxurious serviced apartments in Thailand (and possibly Southeast Asia). The building is 77 floors, with the penthouse reportedly sold for approximately 500 million baht in 2014. The building is not exactly open to public access yet -- you'd have to buy a 10 million baht-minimum condo to get in at all. It is currently working on an observation deck, which should open in 2018. Specifics regarding the observation deck are still scarce, but it will definitely be higher than the current highest observation deck at Baiyoke Tower. 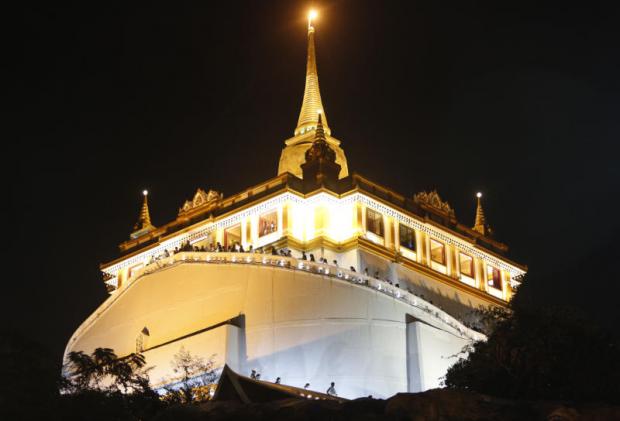 While technically only about 80m high, the Golden Mount at Wat Saket is also one of the more well-known destinations for those wanting a high vantage of Bangkok. It also has the benefit of being largely free for all to enter. Furthermore, being located in the middle of one of Bangkok's more historic districts (not too far from Democracy Monument), the area surrounding the temple consists largely of relatively low Rattanakosin-era buildings, which means its meagre height still provides a fairly pleasant field of view. 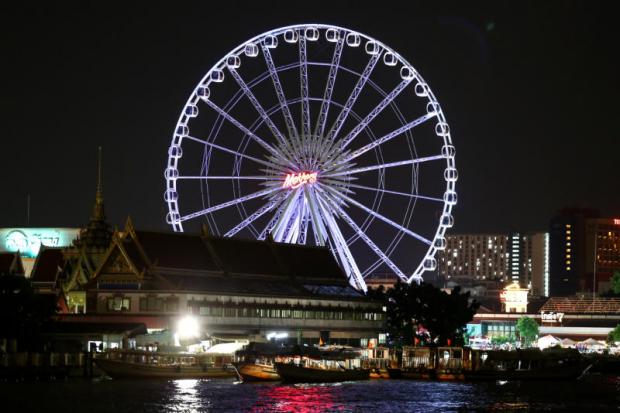 While not technically a skyscraper (or a building for that matter), the Asiatique open-air mall does have a 60m-tall Ferris wheel. More notable for its location, the Ferris wheel provides a great vantage of the Chao Phraya river and its surrounding areas, like the popular Wat Arun. The wheel is probably most enjoyable at night, as the mall also regularly has fireworks displays that look stunning from high up, while the reflected lights of ferries and buildings alike twinkle on the water of the Chao Phraya after dark. 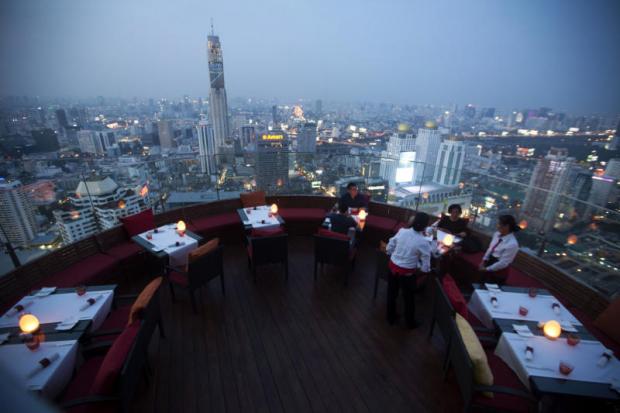 From Centara's Red Sky Bar (55th floor, 235m) to Banyan Tree's Vertigo (61st floor, 198m) and State Tower's Sirocco (63rd floor, 240m), rooftop bars in Bangkok are a dime a dozen. If you're staying in a well-known hotel chain, then there's most likely one just above you right now. However, as many hotels in Bangkok tend to centre around the Witthayu area and those adjacent to it, the views from many of these rooftop bars will probably be largely similar. That's not to say it isn't a good view, as the aforementioned areas are among the most bustling in Bangkok. If you want a view of Bangkok at its most metropolitan, then rooftop bars are also a great way to experience that.