With no end in sight to the civil war, some refugees are returning to their homeland

family affair: Khaled Khashet, centre, his two brothers, their wives and a gaggle of nearly a dozen children live in Zaatari, an hour's drive outside Jordan's capital Amman. Justin Calderon

When Khaled Khashet fled Syria over four years ago, he was the first of his immediate family to uproot and leave everything behind. He said "it was time", a feeling not yet echoed by his loved ones but upheld with conviction by himself, perhaps through his experience in the Syrian army, which he fortuitously left just months before war broke out.

It would not be long until the fighting intensified in Khaled's hometown of Daara, forcing his family to escape mounting violence as well. Now Khaled, his two brothers, their wives and a gaggle of nearly a dozen children live in Zaatari, located an hour's drive outside Jordan's capital Amman.

When they first arrived there, following closely in Khaled's footsteps, the refugee camp was a ramshackle collection of pinned down tents that harboured not more than 5,000 other Syrians. Yet, as the war intensified, Zaatari's population continued to grow, maxing out at 130,000 people, but as of 2017 settling to around 79,000, making the camp more manageable and more like a permanent settlement.

Zaatari is today the world's largest Syrian refugee camp as well as the second-largest humanitarian facility under United Nations management. This month the camp enters its fifth year of operation as the civil war that drove Khaled and his family out of Syria still rages on just a few kilometres to the north, with no sign of the bloodshed subsiding. Khaled had recently turned 30 when we met, but from one glance at his wrinkly eyes and sun-damaged skin, it seemed like he had lived more years on this planet than that.

The spectre of Islamic extremism has today permeated into the heart of Europe and continues to dominate the headlines. On the night of June 3, Britain witnessed its third terrorist attack within three months. But in Jordan, the horrors of Islamic State (IS) had come straight to their doorstep, which led the Amman government to shutter its borders with Syria and Iraq in 2015. Jordan has since been attacked various times by IS, most recently last December in the central city of Karak when fighting resulted in the deaths of several Jordanian policemen and a Canadian woman who was hit by a stray bullet. Yet, by and large, the country has remained a safe haven for refugees in the region -- a sanctuary in the centre of the storm.

The closure of borders signified something else for refugees in Zaatari. Having few other choices at hand, a stern reality dawned on the Syrian residents in this arid plain that they would be forced to acknowledge there would be no easy path back home. They would have to steel themselves to further endure an uncertain future on Jordanian soil, passing life's momentous milestones in limbo -- from the marriage of a sibling to the birth of a child, which would add to the 5,000 that have already been born in the camp to date.

Khaled himself has had two children in Zaatari. He works odd jobs fixing cooling systems for refrigerators in the camp, but mostly idles away the days in the company of his family in front of the small store they manage, which sells a miscellaneous arrangement of snacks and children's toys. Since coming to the camp, Khaled's brother has taken up more religious chores. He is the imam at one of the camp's mosques and in charge of chanting the calls to prayer. The attendants of his service are mostly from their hometown Daara, just like the majority of residents in Zaatari.

Commerce thrives in the camp, where refugees are given a monthly stipend of US$28 and domestic trade with Jordanians has created an internal economy. According to the UN, about 3,000 local businesses generate $13 million a month, mostly through two long souks -- or markets in Arabic -- which are so boisterous with trade that they could be mistaken for a rural Cambodian village instead of a refugee camp. Shops here sell everything from shawarma, canaries (a favourite household pet among Syrians) to the latest mobile phones from Huawei. There are wedding dress shops that teem with brides-to-be every spring, the traditional season for marriages in Syria. Then there is the handmade furniture store, run by a portly entrepreneur who has opened up three branches in Zaatari. When we meet, he was standing next to a freshly sandpapered rocking crib, an item that will likely be popular with the camp's newest brides some time next year.

But not everyone has become so readily accepting of the new lives Zaatari offers, even if there is security and, as Khaled says, "a peace and quiet because there are no bombs".

For some, there is another option if they can stomach the consequences. Fed up with the frustration of waiting out a resolution to Syria's increasingly complex war, there is a group of refugees in Zaatari who are making one of the hardest choice's of their lives: to go back into Syria to find and reunite with loved ones, knowing full well that once they cross the border, they will be unable to return to Jordan.

Helene Daubelcour, senior external relations officer for the UNHCR in Jordan, says that family reunification is among the reasons why the camp's population has shrunk, considering that it remains rare for refugees to be granted a Jordanian identification number, which is needed to legally enter the local workforce. The UN and Jordanian government administer the registry of people looking to return and actively dissuade this choice because of the imminent danger it posses to these vulnerable people, as well as because the border back into Jordan via Syria will likely remain closed for the foreseeable future. Yet, the authorities still allow refugees to return to Syria if they can present a convincing itinerary of action and commit that they genuinely will not rejoin fighting once they get home.

When I meet Abu Asem, 52, who was a real estate agent in his former life before fleeing to Zaatari, he is sitting on the floor of his caravan donated by the Saudi government with a stern slouch of a wise but weary man. He has a daughter in Damascus who is in uncertain peril. His wife, who declined to be named or photographed for fear of reprisal in Syria, has made the choice to return to live with their daughter.

When the family fled Syria three years ago, their only daughter chose to stay behind with her husband. However, the recent disappearance of her spouse has left her in a precarious situation, prompting Abu Asem to send a portion of his meagre monthly pittance of about $400, which he earns from recycling waste under an Oxfam programme, and compelling his wife to cross the Rubicon back to Syria.

Abu Asem was a fervent supporter of the uprising against the Assad regime during the war's initial years, but today derides international intervention for soiling the true meaning of the rebels' cause. "At the beginning there was a revolution, but with the involvement of Western powers, Russia and Iran, they [foreign powers] have ruined it." His point is valid. Today, Syria's civil war has mutated into a four-way proxy war involving superpowers and insurgents, divided by Russia and Iran's support for Assad's regime in Damascus; the US, the EU, much of the Arab world and Turkey throwing their support behind the rebels; the unilateral mass murder and cultural destruction led by IS; and a coalition of opportunistic Kurds who see the regional chaos as a chance to fight for national sovereignty.

While the fighting persists, Abu Asem says that if he or his son returned to Syria, they would be approached on the border and quickly conscripted by the Free Syrian Army -- or even IS. An elderly woman would have a much higher chance of making it to Damascus unobstructed.

This impasse hasn't stopped Abu Asem from brooding. "She is going to her death," he grunts. "I don't want her to go, but there is nothing I can do about it because my daughter is in danger."

Over six years of war in Syria has heavily damaged telecommunication networks, making stable signal service spotty at best. "Our daughter calls us whenever her phone gets service, which is maybe once every week or two," Abu Asem continues. "We dream of returning to Syria one day, but I know that is not possible now."

As I left Abu Asem's caravan, he perched himself outside on a plastic chair in the sun and watched a truck fill up a tank on wooden stilts with water for his family. He seemed to retain the frozen look of a daydreamer who doesn't know anyone is watching them. We drove off and a cloud of dust fogged our view of him, still locked in a deep reverie.

While Abu Asem's family may continue to harbour the hope of one day returning to Syria, there are many who have dashed such dreams on the rocks. Khaled's point of view draws a clear distinction between the two different ideals that Zaatari's residents now cling to.

"Syria is not coming back any time soon," Khaled hissed. "It'll be another 50 years or more before it is rebuilt." He drew a crossed line over the palm of his hand. 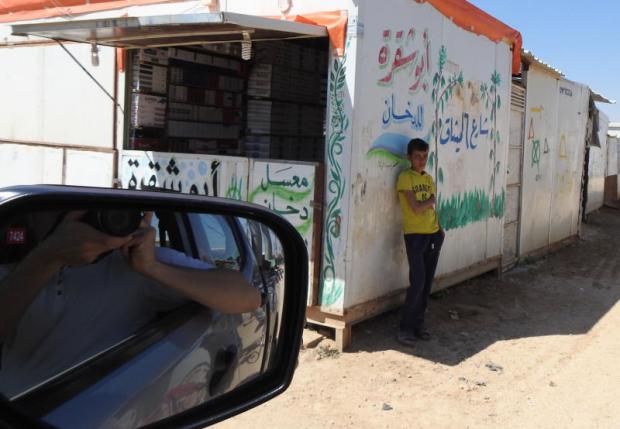 safe haven: As its population has grown, Zaatari has taken on the semblance of a permanent settlement and become more manageable. The camp enters its fifth year of operation this month as the civil war rages on just a few kilometres to the north, with no sign of the bloodshed subsiding. 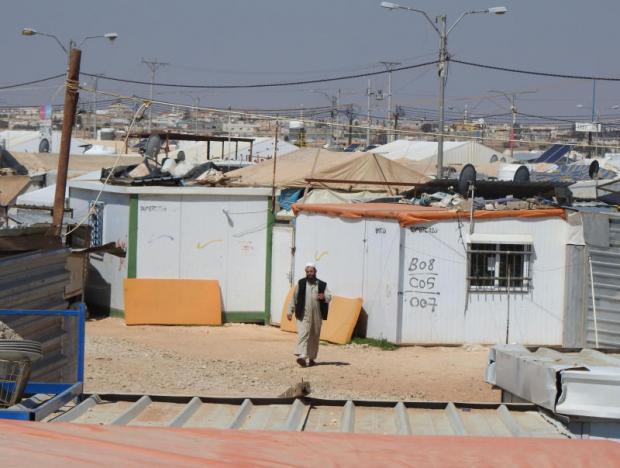 population spurt: The number of Zaatari's inhabitants hit 130,000 at its peak. 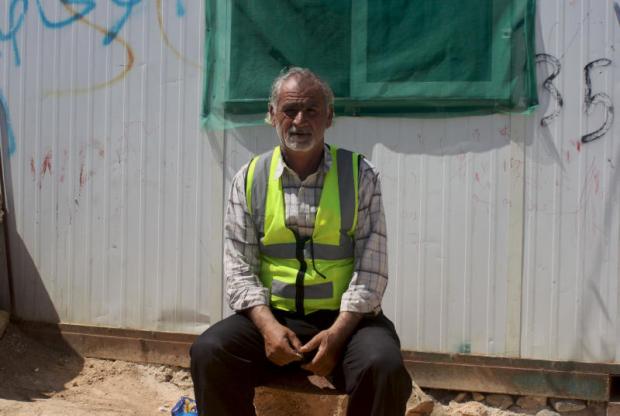 rebel with a cause: Abu Asem initially supported the uprising against Assad but now criticises international intervention for soiling the true meaning of the rebels' cause. photos: Justin Calderon 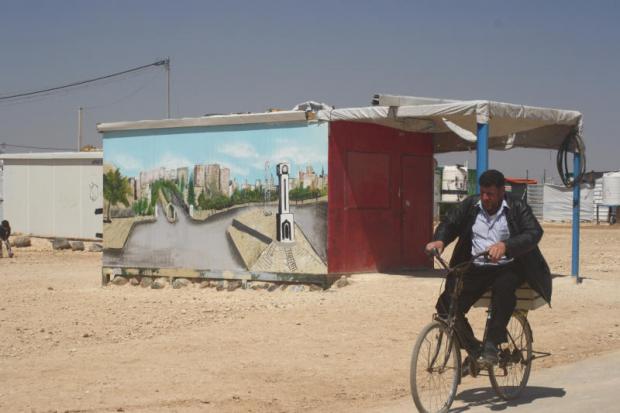 wheels of misfortune: A man rides a bike in Zaatari, the world's largest Syrian refugee camp as well as the second largest humanitarian facility under United Nations management. 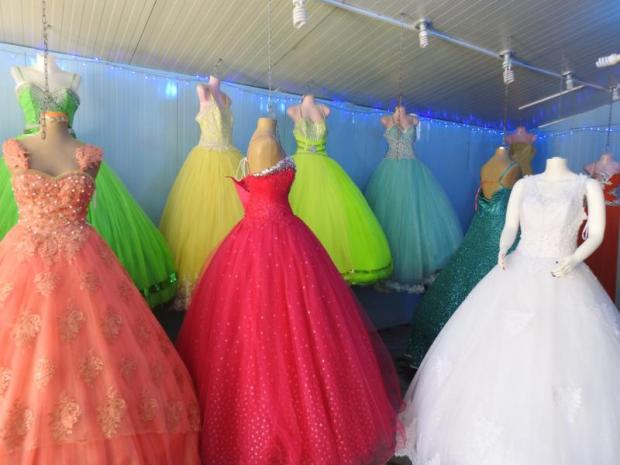 brides to be: Wedding dress shops teem every spring, the traditional season for marriages. 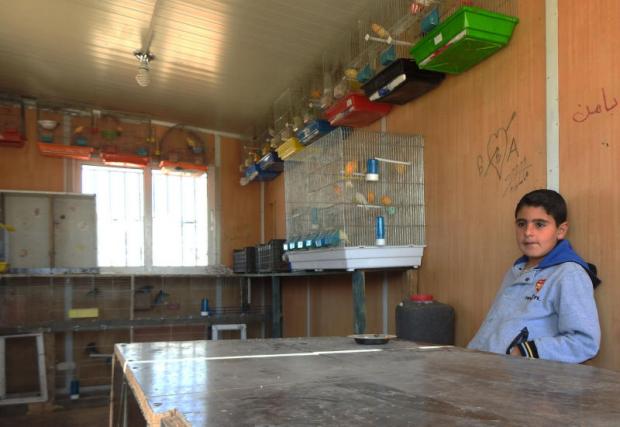 feathered friends: Canaries for sale at a shop in Zaatari camp. The colourful little birds are a favourite household pet among Syrians.