The proposal of a fee for the use of water from rivers, lakes and other natural water resources for the agricultural sector is unlikely to be implemented easily as it is an alien concept to Thai culture. The lives of Thai farmers are inextricably connected with rivers and they see no justification for why they should have to pay for something that is a natural part of their life and an essential part of their culture.

It is therefore no surprise that farmers nationwide are up in arms, voicing their opposition to the controversial water resources bill, which includes a section on the imposition of a fee for water use in the agricultural sector.

It is a fact that all governments need to protect the sector as farmers are a major voting bloc for political parties. Even the military government has listened to the powerful voice of the farmers. So is not surprising that officials from the relevant state agencies came out to allay their concerns, assuring them that the farming sector will not be affected by the bill.

Hannarong Yaowalers, chairman of the Thai-Water Partnership and a member of the National Legislative Assembly (NLA) committee vetting the bill, said the public's confusion over the bill was caused by a failure of communication as there was no official conclusion on how to collect the water fee because the details need further discussion.

Everyone agrees, however, that the fee would not apply to small-scale farmers and would only be levied on commercial and large-scale agribusinesses.

Mr Hannarong added that the committee discussed fees for a water use licence for large-scale users of water, covering the agricultural, industrial, commercial and tourism sectors.

"We have never talked about fee collection based on cubic metre consumption in the committee, but we have seriously discussed the water use licence fee, which may vary from 10,000 to 50,000 baht based on the type of business. The validity period might be for three years," he said.

The NLA is now considering the controversial bill, and 95 of its 100 articles have already been considered. However, there are many articles that might have an impact on people's livelihoods, so NLA members have agreed to extend the period of consideration for another 90 days, with the last day of deliberation falling on Jan 25, 2018. But a further extension could be made if necessary.

WHAT THE BILL SAYS

The Ministry of Natural Resources and Environment hosted the controversial water resources bill and submitted the draft for the NLA's consideration in 2015. Each article was carefully considered to avoid causing burden to people nationwide. There are 100 articles on the bill divided into nine sections, as follows.

Section 2: The right to water: Public water resources are for all. People have the right to use or keep water as necessary.

Section 4: Water allocation: Water users are divided into three categories. In the first category are those who use water for a living in low-consuming farming and industrial sectors; the second category covers those who use water on a commercial scale, including large-scale farming, industrial, tourism and power plant sectors; the third category includes those who use water on a large scale. Those in the second and third categories need to have a licence for water use and the cost of a licence will be covered by ministerial regulation. Waiving of the water fee is also covered by ministerial regulation.

Section 5: Drought and flooding: The basin river committee has the right to announce contingencies for droughts and floods and manage plans to handle such crises.

Section 7: Granting authority to officials working under the bill.

Section 8-9: Penalties for those who breach the water resources bill, ranging from a minimum one-month prison sentence to a maximum fine of 300,000 baht fine.

WHY IS THE BILL NEEDED?

Worasart Apaipong, chief of the Department of Water Resources who is pushing the water resources bill, said water management is essential as there are many signs of impending and critical conflicts over the of water resources among communities and between the industrial and farming sectors. And the situation will get worse if there is no effective law to manage public water resources.

He said the bill grants priority for water usage to the agricultural sector since farming is a major contributor to Thailand's GDP, and thereafter water resources will be shared among the other sectors, with the rules on water allocation to be drawn up by the river basin committee involving all stakeholders.

Mr Worasart said the bill will plug loopholes in the civil law's article 1355, which states that people can pump water from rivers based on their own "necessity".

He said the wording of the law as it stands is open to interpretation and is likely to cause conflict as water resources are a necessity for both large-scale agribusinesses and small-scale farmers.

Large-scale farming could take all the water from water sources and leave none to the others. But the bill has a mechanism to ensure fairness and equal access to water resources for all stakeholders.

He added that the bill focuses on public participation to manage their own river basins in order to minimise the impact of droughts and floods, including a plan to protect and preserve water resources for long-term sustainability.

"We need to have the water resources bill as the key tool for water management. We have 30 million rai of the water irrigation system that the bill doesn't cover. But it will take care of more than 119 million rai in rain-fed areas that need to have a well-managed water plan," Mr Worasart said.

He said while the draft bill does not state the exact figures for the water use fee, levying such a fee is needed to raise consumers' awareness of the need to save water and use the precious resource in a smart way.

It is estimated that around 5 billion baht will be collected from the fee.

According to the Department of Water Resources' data, national water demand averages 151.75 billion cu m per year, while supply stands at 112.14 billion cu m, with the agricultural sector accounting for 75%, the industrial sector 3%, consumption 4% and preserving the ecological system representing 18%.

WHAT DO THE FARMERS SAY?

Farmers have lashed out at the draft bill as there is a proposal that farmers pay up to 50 satang per cu m. Based on a rough calculation, it requires 1,500 cu m of water per rai for a rice farm. With a plot measuring 60 rai, a farmer would have to shell out around 45,000 baht for water fees per year.

According to the Department of Water Resources, a farmer who owns more than 50 rai of land will be considered a commercial-scale operator.

Nanthawan Handee, a coordinator of the Alternative Farming Network based in Chachoengsao province, said the draft bill will have a major impact on farmers as the government's thinking is to own natural water resources, which in fact should be accessed at no cost by the farming sector.

"It is not fair. The bill has left us with a huge burden. People's participation is very important when the government intends to issue legislation that will have a large impact on people," she said, adding that farmers must be involved in the process when the definition of commercial-scale farming is raised by ministerial regulations.

Buntoon Srethasirote, director of the Good Governance for Social Development and the Environmental Institute, said difficulties remain over the definition of "commercial" and "large-scale" farming -- the very reason why the bill has not been enacted for over 20 years. He recommended that the definition should be based on the social dynamic movement as the current rules might not be applied for the next five years, so flexibility is the key to its enforcement. 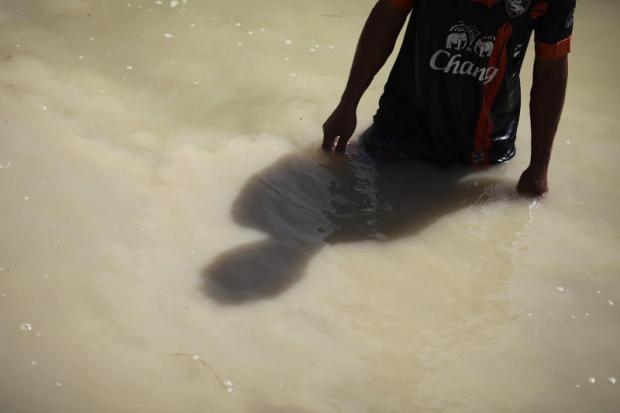 slippery work: A villager works in a pond as he diverts water for his rice paddy in Samchuk district of Suphan Buri. PHOTO: Patipat Janthong 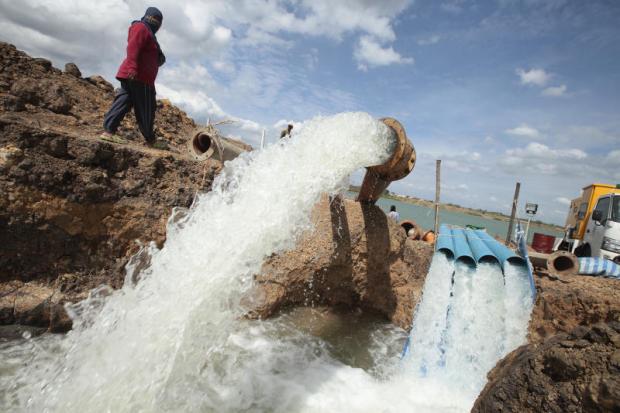 help yourselves: Farmers in tambon Lat Chit in Phak Hai district of Ayutthaya pump water from a private milling pond into their paddy fields. The owner allowed them to use the water because the government's drought relief measures had yet to reach them. PHOTO: Patipat Janthong 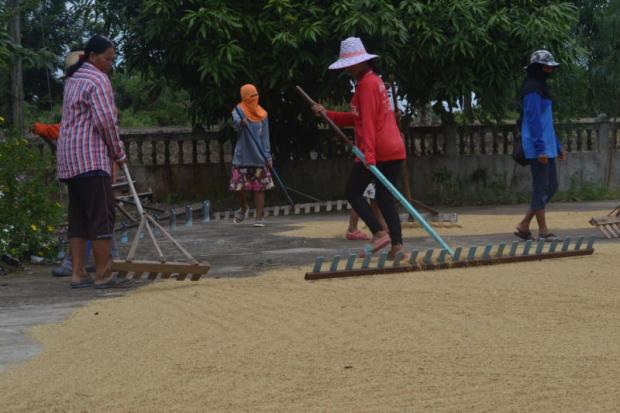 bearing the brunt: Farmers will be most affected by the water resources bill. photo: archive 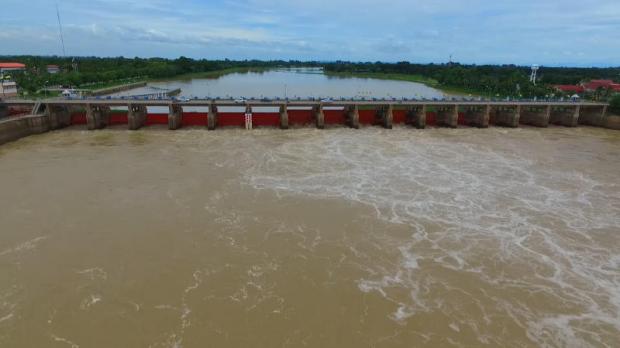