Thailand's universal healthcare coverage (UHC) scheme is confronting its most critical time since its introduction in 2002. For over a decade, the scheme has been praised all over the world for its achievement in providing healthcare access to over 48 million out of 66 million people, filling the gap left by the social security scheme and civil service welfare.

But since the 2014 coup, UHC has become a target for military government leaders and bureaucrats who often blame the scheme for having a poor financial model that causes trouble for medical providers.

The debate about the scheme's pros and cons led to an ongoing amendment of the National Health Security Act that has created a controversy about the future of UHC.

Prime Minister Prayut Chan-o-cha once described universal health care as a "burden" on finances. He called it "populism" and ironically asked which government invented this scheme.

UHC is often dubbed as the masterpiece of Thaksin Shinawatra, who launched the scheme with the slogan "30 baht treats all diseases". It is mainly funded by tax on a capitation basis. 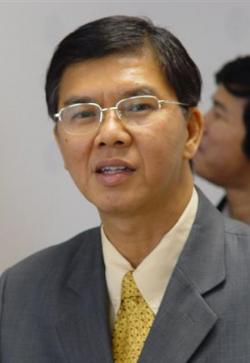 The 30-baht fee was revoked in 2009 by the Democrat-led government, which renamed the slogan to "free treatment for 48 million people" in a move seen as a political attempt to sweep an icon of Thaksin out of the scheme.

But in a political war where UHC is seen as nothing but Thaksin's populism, the name of the man who was behind the scheme's success is sometimes forgotten. Sanguan Nitayarumphong is a rural doctor and a pragmatic problem solver who led the scheme's invention until it caught Thaksin's attention.

In the 1980s, he began his ambition to establish health care for all after witnessing the experiences of patients who couldn't afford medical treatment.

He tried convincing everyone -- people, governments, bureaucrats and politicians in many political parties including the Democrats, Chart Thai, Sereetham and Thai Rak Thai -- that UHC could be achievable in Thailand.

But Thaksin got Dr Sanguan's idea the most. He promoted universal health coverage in his election campaign and introduced it immediately after his landslide election victory in 2001.

"The scheme is certainly populism," says Suwit Wibulpolprasert, a prominent doctor who went along with Dr Sanguan in a quest to set up universal health coverage. "But it has been operated very well and became state welfare eventually."

Dr Sanguan laid the foundation for UHC, dubbed the best-organised welfare scheme ever devised in Thailand. He changed the whole perspective of Thai health care from a system only available to people who could pay or those granted doctors' patronage to the present system of equal rights for all.

Although UHC was born without politics, the scheme's politicisation is undermining the health and opportunities of the whole population. 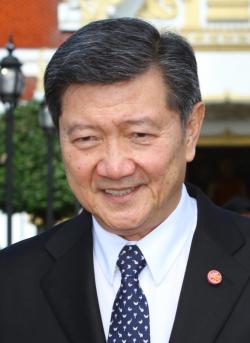 "One incident I will never forget involved a woman who turned her back on our hospital to seek treatment elsewhere for her sick child because she was unsure if she could afford the hospital fees."

Dr Sanguan's memoir, Struggling along the Path to Universal Health Care for All, published in 2006, two years before his death, recalled that he met this woman while he was working as a rural doctor at Rasi Salai District Hospital in the northeastern province of Si Sa Ket.

In the late 1970s, he saw her holding her child in heavy rain while waiting for public transport. It appeared that the child had pneumonia. He picked them up in a hospital van and took them to his hospital.

But he was astonished when she disembarked from the van, turned around and walked away. She told Dr Sanguan that she had only 30 baht. She planned to take the child to a nearby clinic where a health practitioner would charge her only 20 baht for an injection. This would still leave her enough money for her return trip home.

Dr Sanguan was able to get the child proper treatment in his hospital free of charge. But the incident raised his awareness that even if hospital operators could provide excellent treatment and be flexible with fees, there were factors beyond geographical limitations including economics, cultural beliefs and a lack of knowledge about the potential severity of an illness and its proper treatment.

His experience reflects in the development of UHC to not only focus on providing medical treatment but also to reform finance and health service delivery.

Prior to the launch of the 30-baht scheme, allocation of public health budgets focused primarily on hospitals and healthcare facilities. Where the budget would go depended on the decisions of political and economic forces.

To distribute budget shares, Dr Sanguan and his academic team developed a state financing mechanism based on capitation -- the use of fixed prepayments per patient covered by contracted healthcare facilities. 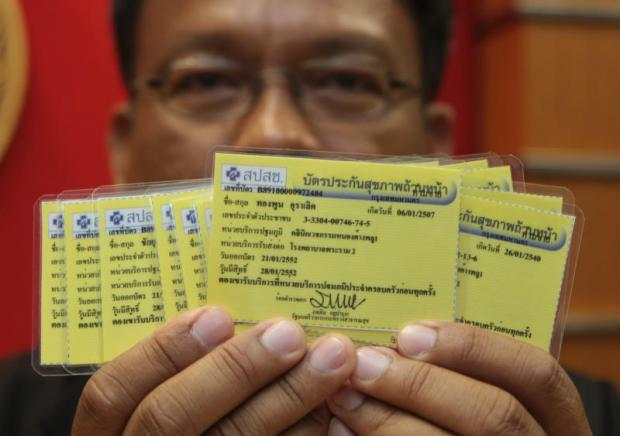 So the budget goes where people are, then healthcare access follows. The capitation method also allows government to fund universal coverage within its capacity limit.

"While there was seldom a shortage of support for the concept of universal health care in Thailand, most people felt the programme was a luxury only rich countries could afford," Dr Sanguan wrote.

Opponents of his idea pointed to a lack of financial resources, especially when the Thai economy had yet to recover from the 1997 financial crisis. Some academics and bureaucrats simply rejected his idea because "Thailand was not ready for it".

In 2000, Dr Sanguan campaigned in collaboration with NGOs and labour, consumer and patient groups to gather 50,000 signatures to support the national health security bill that would be a foundation for UHC establishment. The bill was drafted by stakeholders. This was only the second time in Thai history that the public had placed a people's bill before parliament. 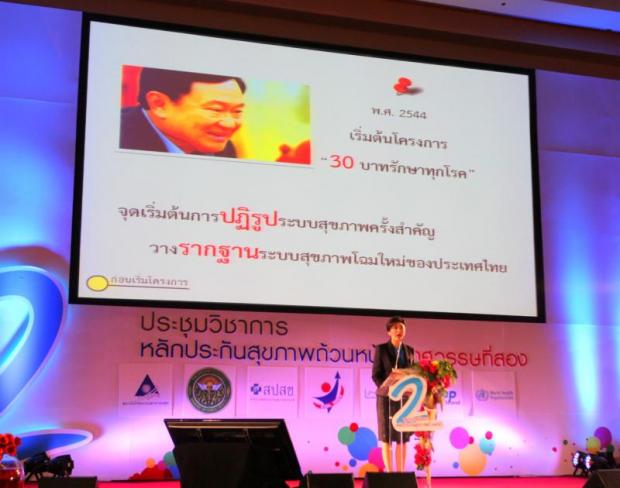 PRIDE OF PHEU THAI: Former PM Yingluck Shinawatra addresses a meeting on universal health care at a Bangkok hotel in front of a picture of her brother Thaksin. Photo: Apichit Jinakul

At least twice high-ranking public health officials and influential politicians demanded he abandon his campaign or he would lose his job at the Public Health Ministry. The threats might have been related to the fact that the bill would distribute budget out of centre, threatening the influence of central bureaucrats.

When Thai Rak Thai won the 2001 election, >> >> it adopted the bill and piloted UHC in six provinces, later expanded to 15.

"When politicians made commitments and took serious action that bureaucrats and technocrats went along with, UHC could happen and become state welfare," says Dr Suwit adding that people have a sense of ownership because they were allowed to participate in building the scheme. "Without Dr Sanguan, it wouldn't have happened," he says. 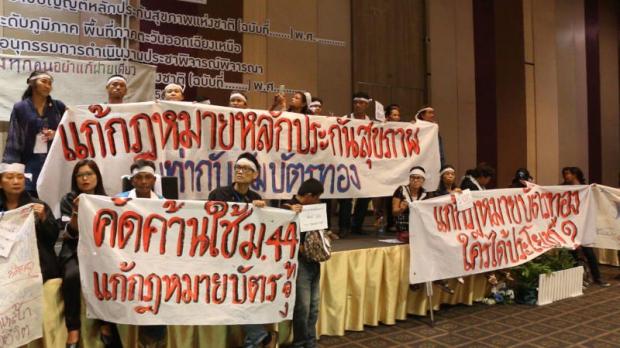 DEFIANT: Public health activists protest against the amendment to the National Health Security Act at a public hearing in Khon Kaen in June. Photo: JAKKRAPAN NATHANRI

Recent years have seen the emergence of an intense movement of bureaucrats and doctors against UHC. Some of them joined the "whistle street protests" of the People's Democratic Reform Committee in 2013-14 and called for the coup to overthrow Yingluck Shinawatra's government.

They complained to the military government that the NHSO was poorly managing the UHC budget and causing hospitals to have financial deficits. They also accused the NHSO of corruption, which was ruled out by the Office of the Auditor General's investigation.

It's like deja vu. The military government, which has been criticised for creating a bureaucratic state by appointing many bureaucrats to its reform bodies, has raised doubts about the UHC scheme, just as happened in the 1990s before it was launched.

Gen Prayut questioned if Thailand was ready for universal health care or hegemonic enough to pay for the scheme. He suggested only the poor should be eligible for the scheme because the government would not be able to cover health care for all. 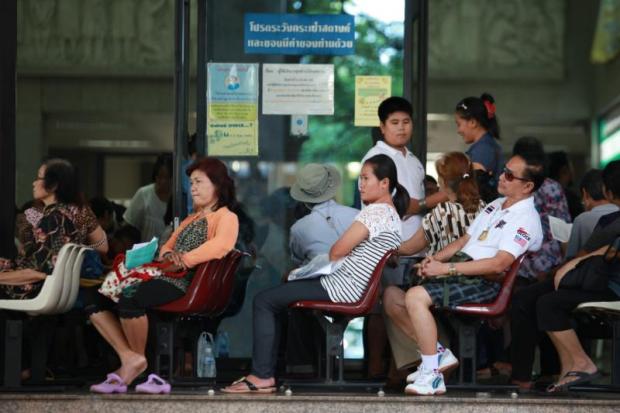 ANGRY: Klong Toey's most impoverished residents claim that a private facility meant to care for them under the universal healthcare scheme exposes them to discrimination and gross neglect. Photo: Patipat Janthong

But there's also the fact that civil service welfare cost over 80 billion baht in a recent year for 4.9 million civil servants' health care with open-ended government funds. This makes healthcare costs for a civil servant five times higher than those of a UHC beneficiary.

The conflict over UHC eventually led to an ongoing amendment of the National Health Security Act.

Even though the minister was convinced that the law revision would improve UHC, civil society groups have raised concerns about many points. 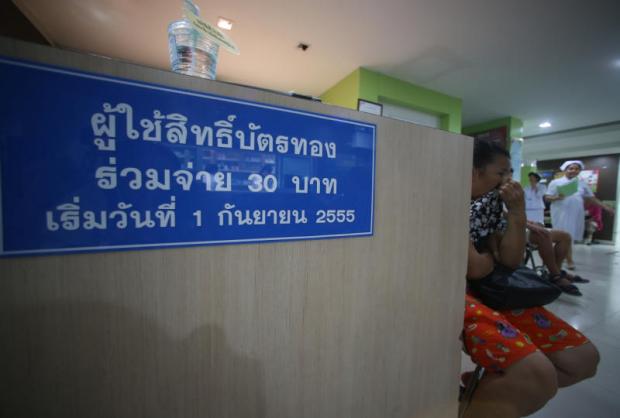 CARING FOR EVERYONE: Patients wait for treatment under the universal healthcare scheme at Bangmod Hospital in Bangkok. Photo: Pawat Laopaisarntaksin

The draft bill, which was finalised last month and awaits the cabinet's approval, added more seats of medical providers to the NHSO board, raising fears that the voices of patients' representatives would be drowned out. Of the 32 seats, the bill proposes 13 seats for medical providers and health practitioner representatives, 11 for government officers and eight for people representing civil society, patients and local administrations.

Critics claim the bill is likely to centralise health budget allocation, opening channels for central government to procure drugs and allocate health personnel salaries instead of paying through the UHC capitation budget.

This would likely return health mechanisms to the old days when budget distribution would go to where hospitals and doctors are instead of where patients are.

"It seems to me that the voices of people were ignored during the bill amendment process," says Sureerat Trimakka, a civil society representative on the bill amendment committee and also a coordinator for the People's Health System Movement.

"The discussion among the committee often went like 'finance is unavailable', 'no need to provide [universal health care] to everyone' or 'we have options like private hospitals so consumers can select where they want to get treatment'," she said. 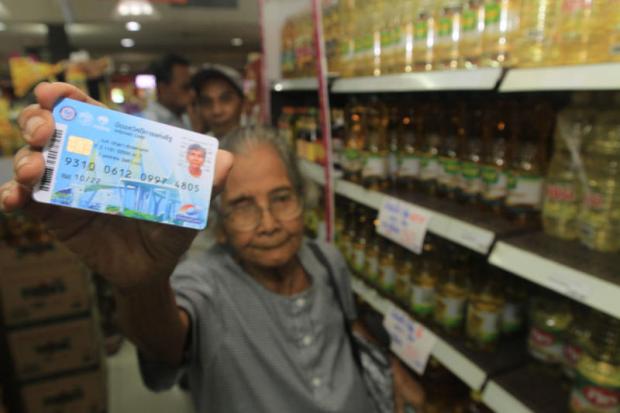 CONFUSION: Low-income people have been given welfare cards to use for transport and shopping but some complained they had difficulty using them. Photo: Somchai Poomlard

While UHC is facing a critical point, the government launched welfare cards for the poor in early October.

The scheme provides identity cards to over 11.4 million registered people who can show their cards to get free transport and commodities valued at 300 baht per month for each beneficiary.

Deputy Prime Minister Somkid Jatusripitak recently announced that the government would implement more programmes to help the poor. He even declared boldly that Thailand would not have any poor people by next year.

But some academics have criticised the welfare card scheme as "short-sighted populism".

"Having state welfare will reduce the inequality gap, which is a big problem in Thailand now. If we don't distribute wealth and opportunities to the people, we can't solve poverty in the long run," says Ms Sureerat.

"UHC has proved that systematic welfare can close the inequality gap in the long term."

The Thai healthcare system has moved forward a long way from the day Dr Sanguan met the woman and her sick child. It can't go backwards. n 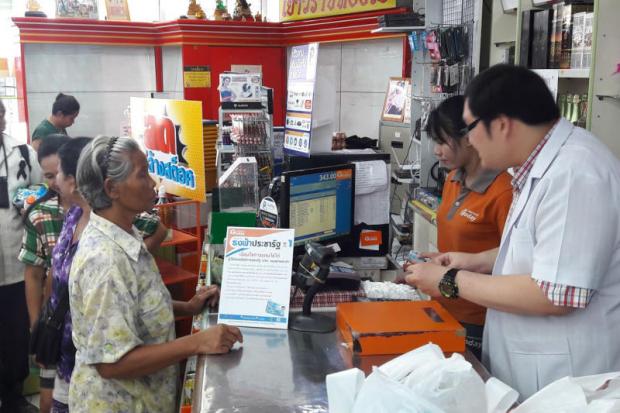 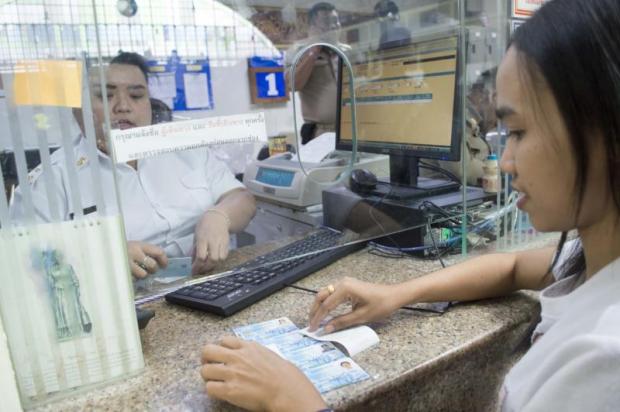 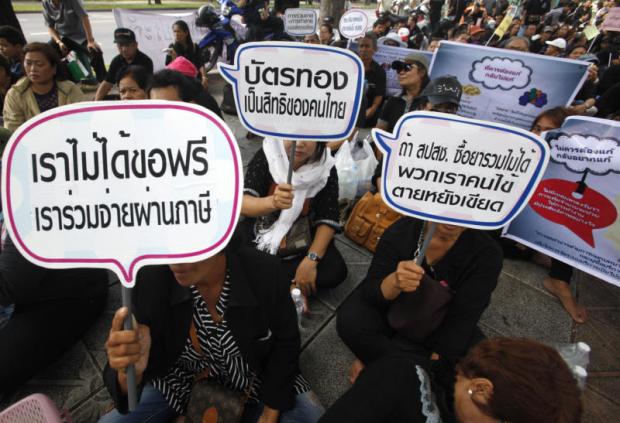