Natural barriers are being popularised in protecting coastlines lashed by erosion

ISLAND OF PRAYER: Coastal erosion has been so severe that Wat Khun Samut Chin is swallowed by the sea. (Photos by Thiti Wannamontha)

The village of Ban Khun Samut Chin has long looked uncertainly towards its future. Based in Samut Prakan's Phra Samut Chedi district, the community is located along the Gulf of Thailand's vulnerable coast. For nearly three decades now, the village has seen its shoreline eroded at the rate of three to five metres every year, submerging 4,000 rai of land in water.

Villagers have been forced to move inland as homes are swallowed by the sea.

Among the residents caught up in the problem is Chao Phakphang, 75.

Mr Chao has already moved three times, driven out by the effects of coastal erosion. But he says his most recent move will be his final one -- he plans to stay put.

"I cannot move any more," he says. "So I need to find a way to deal with the coastal erosion problem. The issue is not just about me. It's about our descendants and the next generation of the community that won't have a place to live if we do nothing about it."

Since 2006, the village has grown mangrove forests and erected bamboo fences along the shoreline to protect the land. The mangrove trees cover over 100 rais, says Mr Chao.

There are 300 residents in Ban Khun Samut Chin. Mr Chao says he hopes the village's success story in countering coastal erosion with natural solutions might provide an example for other communities grappling with the same sea change. 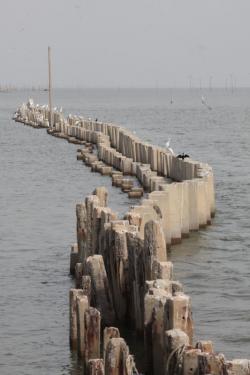 Ban Khun Samut Chin was once home to a mangrove forest that served as a natural dam regulating strong tides. However, these indigenous trees were cleared around two decades ago to be replaced with shrimp farms. The tides have chipped away at the land ever since.

Kunyarut Chitakasem, a villager and director of Ban Khun Samut School, has moved the school three times to escape the effects of coastal erosion. Currently, there are 19 students enrolled at the school from nursery level to Prathom 6. She says that the government should have an action plan for dealing with future erosion, especially as it inches towards Bangkok.

"Most people in our village are poor and would have tougher lives if they had to leave their homes, leaving their children the most impacted," said Ms Kunyarat, adding that moving forces a financial burden on families when they must eventually build new homes.

Some villagers whose land has been destroyed completely need to rent houses.

Witsanu Kengsamut, the 35-year-old village chief, said that local administration officials have proposed the building of concrete walls to protect the shoreline from the sea -- a process favoured for being relatively simple and fast.

However, Mr Witsanu says villagers have not yet accepted the idea, citing fears that a concrete wall would destroy the coastal ecology, affecting small-scale fisheries and mussel farms. In addition, villagers have attested to having problems with concrete sea barriers as they can make the waves stronger, dredging up sediment that only worsens the erosion.

According to Mr Witsanu, several villagers have expressed disappointment in state agencies that have invested money into researching solutions for the village without delivering results.

There was one academic project led by Chulalongkorn University's faculty of science that did grab villagers' attention, however. Nearly a decade ago, the Department of Marine and Coastal Resources proposed that villagers use bamboo-made barriers to reduce the strength of waves lashing against the land.

Villagers helped design and build the three-tier barriers, consisting of bamboo and stone. These barriers ran 300 metres in length. After two years of being in place, the barrier increased sediment by two metres and the land extended to over 10 rai.

Thanks to the simple solution, Mr Chao, Ms Kunyarut and Mr Witsanu are not as fearful of their village's future as they used to be. Emboldened by the success of the current barrier, they want to extend it to cover an additional three kilometres of their land.

Thanawat Charupongsakul, director of the Thailand Global Academy and a lecturer at Chulalongkorn University's faculty of science, is among the team of academic experts seeking to protect the Ban Khun Samut Chin coastline. He also came up with the idea to use concrete to trap sand and sediment to further protect the land. 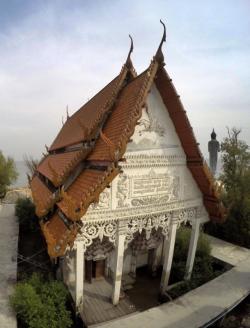 ISLAND OF PRAYER: Coastal erosion has been so severe that Wat Khun Samut Chin is swallowed by the sea. Photos: Thiti Wannamontha

In 2006, Mr Thanawat participated in a research study in the Ban Khun Samut Chin community called "Preventive Construction Against Coastal Erosion". The study found that strong winds and high waves in the inner Gulf of Thailand eroded four metres of land along a five-kilometre stretch of shoreline. The loss of sediment amounted to 264 million cubic metres.

The team decided to build a three-tier, 10 metre-long concrete wall in the village. The wall was designed to manipulate wave and sediment flows.

He said the wall would reduce the wave velocity and trap sand from retreating into the sea.

The model has been praised by international organisations like the World Bank. However, the project has failed to draw attention from Thai government agencies.

In the meantime, Mr Thanawat is planning to take the model to Myanmar and Vietnam, places that have also faced severe coastal erosion.

"We are also thinking of developing a tool to pump accumulated sediment to go towards the shore," he added. "By this, I mean we can add more land to replace the land that was lost over 30 years of coastal erosion. That is what we have planned."

Somsri Avakeat, director of coastal area management at the Department of Marine and Coastal Resources, says that using mangrove forests as natural fences are an effective solution for the coastal erosion facing the Khun Samut Chin village.

The department, which oversees the coastal erosion problem, plans to spend around four million baht to construct an extra one kilometre of bamboo-made barriers, says Ms Somsri.

It also plans to build similar structures in 30 targeted areas along the Gulf of Thailand.

Their approach to problem solving is not "one size fits all", says Ms Somsri. While they tend to favour "soft" or natural approaches like using mangrove trees, some industrial areas require "hard structures" like concrete walls.

Hard structures have become less popular over the years. For example, Saen Sook Beach in Chon Buri recently ditched its concrete sea barrier, planting a mangrove forest in its place.

"But in some places, it is very important to have both hardware and software construction," says Ms Somsri.

The Environment Ministry is also restoring the heavily eroded Chalatat Beach in Songkhla's Muang district, setting aside over 300 million baht to cover a two-kilometre stretch.

The construction is expected to be done next year, says Ms Somsri.

In Pattaya, authorities have hired Marine Construction Joint Venture for 429 million baht to lay down sand along a 2.8-km stretch of beach running from the city's north to south end. This restoration project is also scheduled to finish by next year, said Ms Somsri.

Unlike seawalls, using sand as a buffer to waves appeals to tourists as the substance is carefully selected to resemble the colour already on the beach said Suphot Charulakkhana, who works at Chulalongkorn University's Aquatic Resources Research Institute. It has been hired to solve the erosion problem in Pattaya.

Up to 300,000 cubic metres of sand is being taken by boat to Pattaya where it will be poured into the sea to let the water wash it ashore, he said.

Erosion is a key agenda point on the government's 20 year-reform plan for coastal areas. Under this plan, it wants to reduce areas affected by erosion to only 100 kilometres. 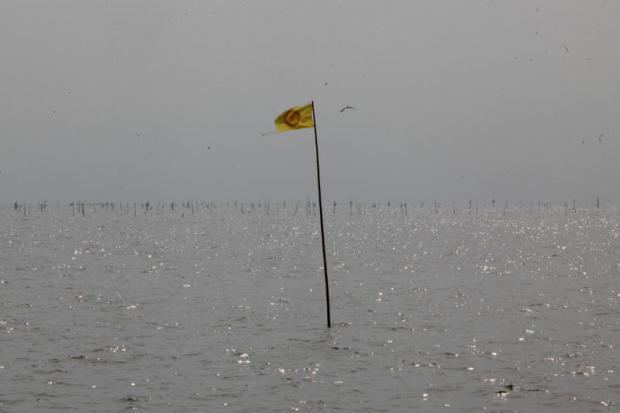 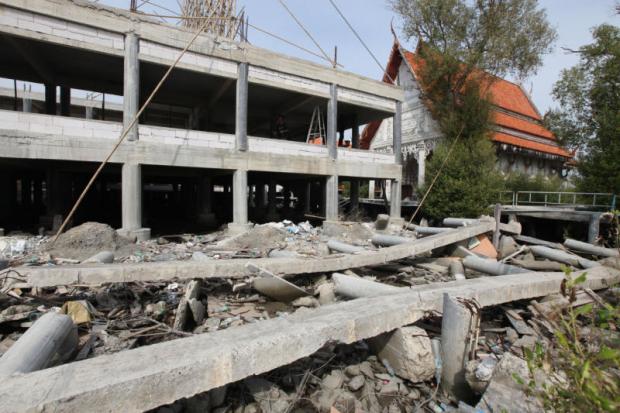 UNDER ATTACK: For nearly three decades, Ban Khun Samut Chin has seen its shoreline eroded at the rate of three to five metres every year. Photos: Thiti Wannamontha 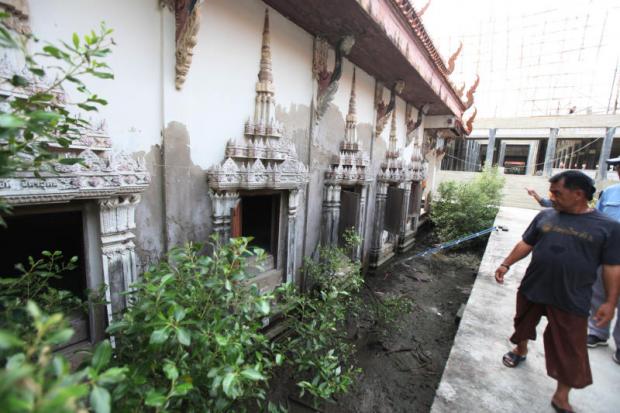 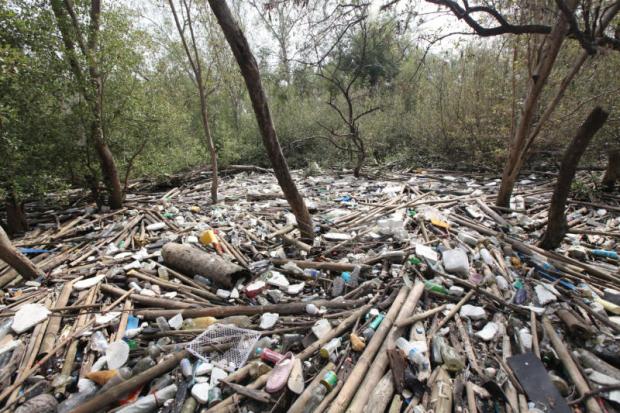 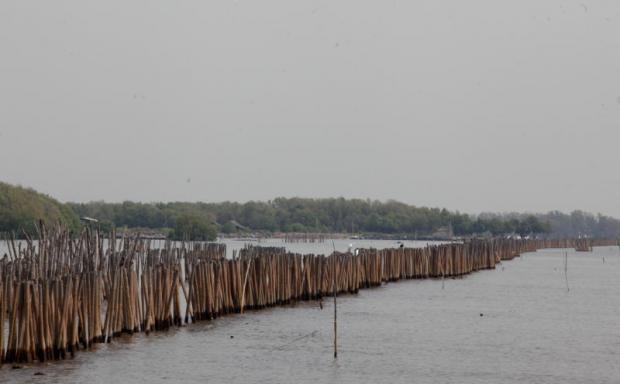 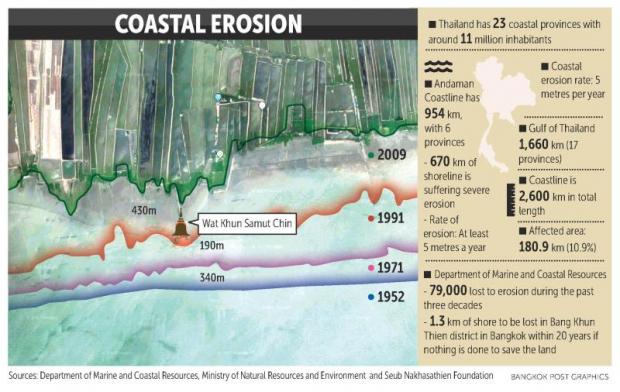