This cashless cafe lets you buy coffee with bitcoin

Operations manager Frances Sy shows a method to pay for coffee with an instant transfer via QR code at the new Ducatus cafe in Singapore. (Reuters photo)

SINGAPORE: Just a street away from Singapore's central bank, a cryptocurrency firm has set up what it claims is the first cafe in the city-state to be owned and operated by a business promoting its own digital coin.

The Ducatus restaurant, which launched on Thursday, sells "hand brew" coffee, sandwiches and eco-friendly beauty products and accepts bitcoin, its own virtual currency, also called Ducatus, and other cashless payments.

Its push to promote the use of its own currency through commercial enterprise, rather than speculative investment, comes the same week the Monetary Authority of Singapore urged investors to exercise "extreme caution" towards the cryptocurrency market, which many feel is in a bubble.

"We just want to make sure people understand that cryptocurrencies are here to stay," Ducatus CEO Ronny Tome said, adding that he had plans to open more cafes in other countries and team up with hotels and travel agencies.

"The way technology develops and grows right now, there is no doubt about that. Developments are rapid and the governments maybe have a little bit of an issue to follow through."

Tome said he welcomed Singapore's efforts to educate people about cryptocurrencies, including warnings against speculative behaviour, but did not think it would impact his business.

The booming global interest in cryptocurrencies means Singapore -- which has positioned itself as a hub for financial technology in Asia -- has to walk a fine line between encouraging technological innovation and reducing financial system risk within its borders.

While the central bank worries about potential losses for its citizens and money laundering through cryptocurrencies, it is carrying out extensive research into the blockchain distributed ledger technology that underlies bitcoin.

Singapore's concerns echo those expressed by regulators in other jurisdictions such as Australia and South Korea.

"The regulators generally around the world are worried about less sophisticated investors getting drawn in to what is a pretty murky and dark market," said Phillipps. 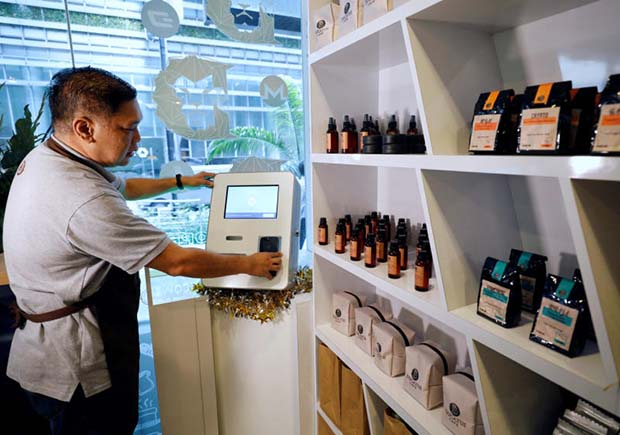 Ducatus franchise manager Philip Lim shows how a deposit is made at a Bitcoin ATM at the opening of their first cashless cafe that accepts cryptocurrencies such as Bitcoin in Singapore on Thursday. (Reuters photo)

Warrants for 3 brothers for acid murder