Today is National Children's Day, a time when many Thai children are taken for a day out somewhere nice by their parents. But for others, those who live on the streets, it is just another sad day that they have to endure alone with nowhere to go and no parents to turn to.

‘Nam’, a 16-year-girl who has lived on the streets for years, has now found a home at a half-way house known as ‘Hub Saidek’ in Bangkok’s Pomprap Sattruphai district. photos by Dumrongkiat Mala

Among them is 16-year-old "Nam", who refused to give her real name. She has been living on the street for two years after running away from her home near Rajavithi Hospital after the new husband of her adoptive mother tried to rape her.

"My mum's husband always beat me with a wooden stick when he got drunk and she could not protect me because if she did she would be beaten as well. One night, he tried to rape me when I was home alone with him. I fought and hurt him by throwing a brick at him, so I had no option but to run away," Nam said while showing scars on her arms.

After she left home, Nam went to stay with several friends before ending up living at Hua Lamphong railway station.

"I went back to my mother one time, but her husband drove me out again, so I decided to go back to Hua Lamphong railway station where at least I have other street children as friends," she said.

Nam has never known her real father as he died when she was just two months old. Finding it hard to raise a child on her own, Nam's real mother gave her away for adoption before passing away when Nam was just 12.

"Although she's not my biological mother, I love her because she is the one who raised me and the only person I can call a family member," she said.

When Nam was 16, a homeless man at the railway station told her there was a youth centre called the "Hub Saidek", which means "Hub of Kids", in Pomprap Sattruphai district near the station.

Known as being a shelter for street children, the Hub Saidek provides food and allows homeless children to sleep there overnight free of charge. Nam decided to walk there, and the youth centre has become not only her home, but her new family ever since.

"When I heard about this place, I did not hesitate to go there because everyday life for street children is rough. We have to beg for food, water and money. Society looks down on us and people dismiss us. We have to sleep without blankets. When it rains, it's wet and cold, and when it's hot, there are lots of mosquitoes,'' Nam said while rubbing her legs which are scarred with pockmarks from the bites.

Established in 2011, the Hub Saidek youth club has offered support to hundreds of homeless and disadvantaged children in the district. Its building is a short walk from Hua Lampong railway station where runaway children congregate from all over Thailand.

This private, non-profit youth centre provides free shelter and food to children and young people ranging from the ages of five to 18 who have experienced the following circumstances: Homelessness in Pomprap Sattruphai district; struggles with drug or alcohol addiction; living locally but experiencing abuse or a difficult home environment; not actively enrolled in school; facing difficulties in school or struggling with education; or struggles with loneliness.

It also provides non-formal education, recreational activities and a skills-for-life programme for its residents.

Thaninthorn Kongsabut, an employee at the Hub Saidek youth centre who is known as "Mae Kwan" (Mother Kwan), said the only thing the youth club asks from children in return is to stop using drugs.

"It's not easy to work with these children because they are not obedient like normal kids. Most of them come from broken families and were abused by adults, so they do not trust people easily, but if we show them love and really care about them, we can usually convince them in the end," she said.

The centre's non-formal education and short-term job training programmes allow the children to learn skills so that they can apply for jobs and make a living on their own in the future.

The Foundation for the Better Life of Children estimates that there are 30,000 children on the streets of Thailand. Most are in the capital, Bangkok, and in Chiang Mai, Pattaya and Phuket.

For Thai street children, the main causes of them coming to work/live on the streets are family problems and domestic violence. In contrast, street children from neighbouring countries mainly cited poverty and economic reasons.

Homeless youngsters in Thailand are faced with serious risks and challenges. Organised gangs often exploit them to work as beggars or to sell flowers and miscellaneous items.

Many of these children are forced to turn over their daily earnings to the gangs and are paid about 20 to 30 baht a day, according to the report by the foundation.

These children are vulnerable to sexual abuse. They are more likely than other children to contract HIV/Aids and to engage in lifelong criminal or self-destructive behaviour such as sniffing glue.

Sompong Jitradub, director of the Research Centre for Children and Youth Development (CYD), said increased awareness of children's rights -- to protection, education and a stable family environment -- can prevent them from being forced onto the streets in the first place.

He said getting children off the street is a very challenging problem as most choose to live there because they were abused by family members.

While drop-in centres, outreach services, vocational training and care institutions exist in most major cities, they do not address the root causes which force children onto the street -- poverty or problems at home.

"We have to work with their families and solve the problems at home, otherwise these children will continue to live on the streets. Each family and each child have different problems and require different solutions," he said.

However, family-based approaches are not widely used in Thailand because there are not enough social workers to trace children's families, design individual solutions or conduct follow-up visits.

"More and more children are leaving home, and the longer they live on the streets the harder it is to get them back together with their families. We urgently need more trained social workers who can help reunite these children with their families before it's too late," he said. 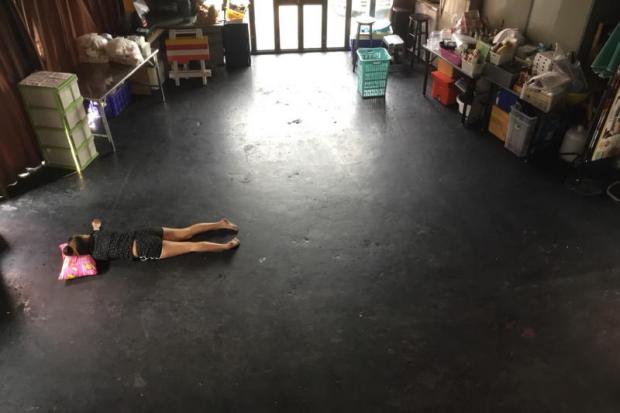 'Nam', a 16-year-girl who has lived on the streets for years, has now found a home at a half-way house known as 'Hub Saidek' in Bangkok's Pomprap Sattruphai district. photos by Dumrongkiat Mala

For those who want to help, go to www.childlinethailand.org for information.