For king, country and disbanded brothers

Maj Gen Pramote Rattanopas shows off mementos and framed photos of landmark events in his life and career as an army soldier, which are kept at his home in Chon Buri. Some of his most cherished memories are of his military service devoted to the late King Bhumibol Adulyadej who visited the North during the height of the communist insurgency many decades ago. Maj Gen Pramote was one of the troops stationed in Chiang Rai where the late King made a visit. Apichit Jinakul

A Christian Thai soldier has embarked on a mission to help fellow veterans and their families after he was inspired by the footprints of the late King Bhumibol Adulyadej, who was cremated in October after one year of mourning.

The impression was immortalised in a plaster mould on the site of a former battleground between the military and communist insurgents that occurred decades ago. 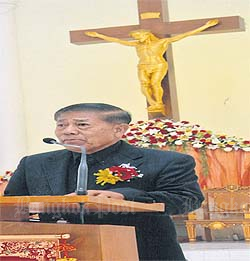 Maj Gen Pramote Rattanopas, also known as "Seh Mote", is a retired military officer. During the height of the insurgency between 1965 and 1983 he fought with other soldiers against the communist insurgents in the mountains of Chiang Rai. Seh is a general term that loosely translates as "strategist".

Just as the guerrilla war waged by the Communist Party of Thailand (CPT) was coming to an end, the late King arrived at the battleground on the mountain in Chiang Rai and left his footprints in a plaster mould in 1982 to symbolise ever-lasting peace.

It also recognised the bravery and self-sacrifice of those soldiers on the front line, many of whom gave their lives to fend off the threat of communism.

The insurgent war, mainly fought by the CPT and the government, was in decline by early 1980 after an amnesty was declared. By 1983 the CPT had abandoned the insurgency.

Maj Gen Pramote recalled being one of five military officers who performed a ceremony for the late King to cement his footprints on the battleground. He described it as the highest honour he had performed during his military service.

The war veteran said he was overwhelmed by the late monarch's benevolence and courage as the ceremony took place at Doi Phaya Phiphak, a former red zone plagued by violence, in tambon Yang Hom of Khun Tan district.

The late King chose to visit the soldiers personally despite the ever-present danger. 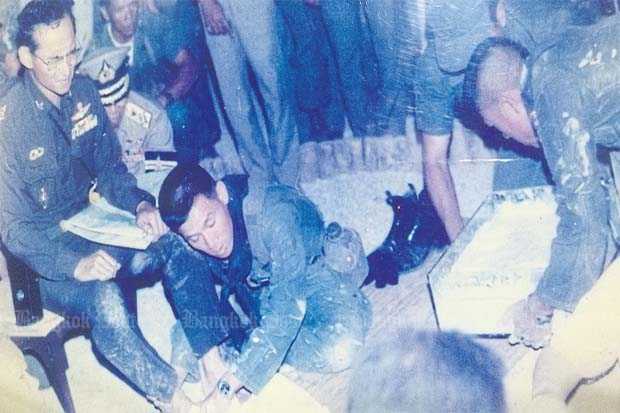 Doi Phaya Phiphak serves as an historical landmark in Chiang Rai, and a grim reminder of how the bitter divisions fuelled by opposing ideological beliefs can tear a country apart.

With the royal visit burned deeply into his memory, Maj Gen Pramote recalled how hundreds of villagers rushed out of their homes and waited for hours to catch a glimpse of the late King on Feb 27, 1982.

The royal delegation toured a military base there to show their moral support for the officers who survived the brutal clashes in what has since been dubbed the "forest war".

Maj Gen Pramote said the footprint holds as much sentimental as symbolic value.

"There is no place on Thai soil where [the late King] could not go or was not willing to reach," he said.

"He even journeyed to the red zones during the Cold War when the communist insurgents were battling it out with government forces."

Under the command of Lt Col Wiroj Thongmit from the 473 Infantry Battalion, various anti-communist operations at Doi Phaya Phiphak were strategically mapped out and executed. The troops, including Maj Gen Pramote, advanced relentlessly until they had driven their enemies out. From the beginning of operations in 1967 until the end, many soldiers lost their lives defending king and country and King Rama IX did them proud by honouring them.

Such royal recognition hammered home the need to take care of veterans of insurgencies as well as their families.

The soldiers have long since retired and many have now passed away or are in poor health. Some of the families barely survive from pay cheque to pay cheque, relying on their state pension to make ends meet.

The group is registering a fund to provide financial aid to war veterans and their families, regardless of their religious denomination. It is holding a fund-raising event on Jan 28 to observe Thai Veterans Day, which falls on Feb 3.

Maj Gen Pramote is more financially comfortable than many veterans and retired officers. But he said he would not be able to sleep at night without trying to help those he fought shoulder to shoulder with make ends meet. 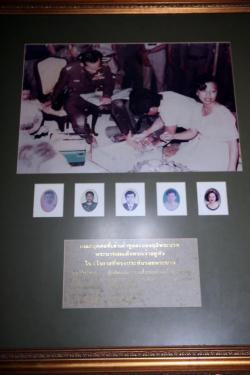 The raised funds will be distributed among war veterans and their families, but details on who will qualify to receive what share have yet to be decided.

Maj Gen Pramote said they should not get their hopes too high as the sums may be quite small, but added that even this could make a big difference for some families and would at least remind them they are not forgotten.

He said his group sometimes organises mass for Christian soldiers in other communities.

This is not the first time the group has committed itself to charitable endeavours.

"In recent years our group, together with the Catholic volunteers, have come up with several projects to raise funds to buy musical instruments for Christian churches. Clothes and blankets have also been donated to villagers in remote areas," he said.

Back at Maj Gen Pramote's home in Chon Buri's Phanat Nikhom, the war veteran hangs up photos showing the plaster being poured into the mould before the late King left an impression of his foot.

He said another set of the late King's footprints are being stored at the Meng Rai Military Camp in Muang district.

Maj Gen Pramote and his force was also deployed to fight with Lao authorities against communist members in Laos.

"Once, I almost couldn't make it. My force managed to retake Sam Thong airport in Laos from our [communist] enemies. While patrolling the area a bomb was dropped not far from where I was standing," he said. 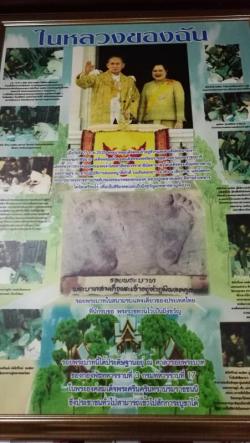 His force was dispatched to one of the red zones in Laos. During a patrol in the forest, his troops were attacked in an ambush which left many soldiers injured.

They also lost contact with headquarters, forcing him and other injured troops to travel on foot for three days without provisions. They ate banana skins to keep their energy levels up as they marched on.

The force finally reached the Ngum River where they were able to radio for help.

"Nearly 10 helicopters were sent to pick us up. I was the last person to board," he said.

"I felt overwhelmed at seeing that all of my subordinates had survived. We were heading back home and on reaching Thai territory we all felt incredibly relieved."

Back when he was risking his life in the front line, his wife, Uraiwan, worked as an army nurse.

After the communist insurgency ended, Maj Gen Pramote was transferred to the Royal Thai Armed Forces Headquarters where he served until he retired.

He was assigned to a desk job but missed active field duty.

His force worked closely with local authorities to keep villagers on the northern border from being indoctrinated by communist insurgents who were out to recruit them.

The troops took part in educating villagers with both academic and vocational training, including farming. This idea was to help them become more self-sufficient while also instilling in them a stronger sense of nationalism.

Doi Mae Salong, a fixture on the tourist map in Mae Fah Luang district, was among the red zones developed by his force. 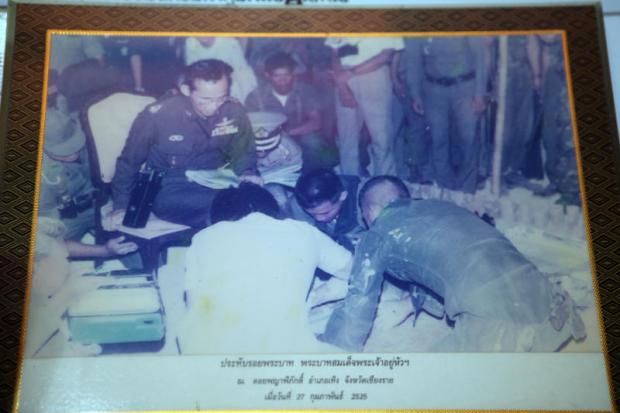 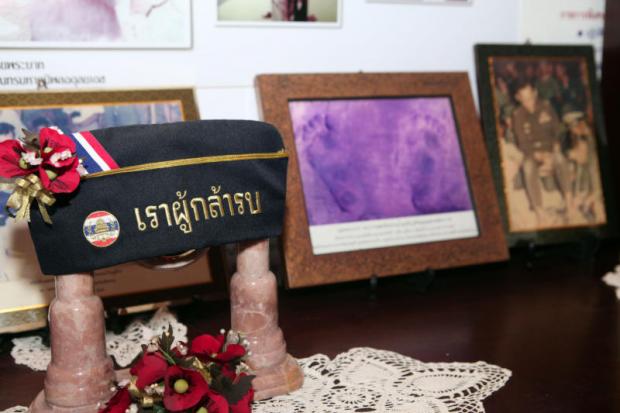 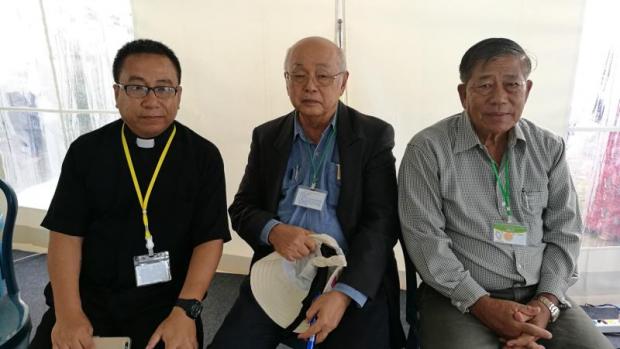 From top  An old photo shows the late King being assisted by soldiers (including Maj Gen Pramote, at right, who was then a junior army officer) as his footprints were pressed on a concrete mould at the communist-infiltrated Doi Phaya Phiphak in Chiang Rai in 1982. Now, Maj Gen Pramote has a photo of the late King's footprints framed and he keeps it as object of reverence. The retired officer also joins fellow Catholics in carrying out charitable works. photos by Apichit Jinakul and Nauvarat Suksamran