Detention centres stuck in past century

heading for an uncertain future: Members of a Pakistani Christian family getting arrested and taken to the detention centre. PHOTO: SUPPLIED/JIRACHAI A.

'Thailand 4.0" is the military government's oft-heard catchphrase, but Thailand's immigration detention system is a relic from a previous century. The need for detention centre reform is not simply humanitarian, but economic, social and political.

Start with the oft-written about Immigration Detention Centre (IDC) in Suan Phlu. Foreign correspondents from the BBC, Al Jazeera, The Nation, Asian Correspondent and countless others have documented conditions in the IDC, and it is not surprising: the IDC feels like an uncomfortably primitive place.

"Good guys in, bad guys out," says the large sign in front. The visiting area has no walls, no privacy panels -- just two wire fences. Like animals in a zoo, detainees and visitors alike are pressed against the wire, shouting above the deafening noise. Once visiting hours are over, detainees are strip-searched before they are corralled into their cells.

Inside, Amnesty reports that official regulations allow for cell sizes to be a minimum of 1.19 metres per person, and with the severe overcrowding, some detainees have to sleep standing up. The detainees are separated into cells separated by gender and perceived ethnicity -- "Room 8 for the black people, Room 11 for the brown people," a visitor says in front of Suan Phlu's IDC. Pursuant to Article 54 of the Immigration Act which decrees that "the expense of detention shall be charged to the alien's account", all detainees have to purchase necessities within the IDC at a marked up price. Honey, bread and sanitary napkins are coveted items. Even drinking water has to be bought. 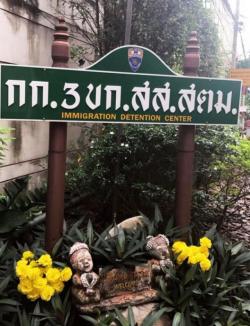 Puttanee Kangkun of Fortify Rights says that the conditions in detention centres are even worse than in prisons. "The detention centres were meant for people to stay for 15 days, and then leave. But in Thailand, you stay there for years, and it's not designed for that."

According to the Global Detention Project, the length of stay for detainees has ranged from three days to 12 years, with asylum seekers and refugees in particular having been detained for periods of over two years as they wait for their cases to be processed.

The difficult conditions within detention centres have impacted asylum seekers and refugees in particular. In 2017, the death of a Pakistani asylum seeker in the Bangkok IDC and the death of a 15-year-old Rohingya girl in the Sadao IDC revealed the depth of the rot hidden in Thailand's detention system.

There are 22 detention centres in Thailand, housing the many "illegal immigrants", as defined by Thai law. Under Thailand's 1979 Immigration Act, anyone who overstays their visa is immediately considered to be in violation of the law. As Thailand is not a signatory of the 1951 Refugee Convention, these "illegal immigrants" include asylum seekers and refugees, both those who are waiting resettlement to a third country, and those whose UNHCR cases have been closed. These include Rohingya, Somali, Palestinian and Pakistani refugees and asylum seekers.

Many of the detainees in the IDC today were apprehended in a government crackdown in October 2015, when more than 9,000 non-Thais were arrested as part of Prime Minister Prayut Chan-o-cha's new mission to reduce illegal immigration by 80%. This was followed by the junta's creation of a blacklist in 2016, under which first-time overstayers are punished with entry bans of varying lengths.

Yet, the effort to put more immigrants, refugees and asylum seekers in detention is not accompanied by an assessment of the sheer cost of doing so.

The government, despite multiple calls for transparency, is incredibly secretive about releasing figures pertaining to the budget allocated for the nationwide detention system. In the absence of official figures, it is difficult to comment on the system's economic efficiency. However, across the world, detention has been seriously reassessed as a solution to undocumented migrants due to its high cost. Although migrants pay for certain necessities, enforcement agents, security devices, lodging, food, medical and legal support, all have to be financially supported by the government.

A study co-funded by the European Union found that in Austria the estimated cost was €120, or 4,700 baht, per day. In Belgium, 7,000 baht. In the UK, 6,400 baht. In the United States, 3,000-4,000 baht. None of these included deportation fees. While Thai figures may reveal themselves to be much lower, the cost of housing hundreds of detainees on a long-term basis will no doubt be substantial.

Moreover, having a detention system that is globally recognised as inhumane -- with criticism from the UN Committee on the Rights of the Child, Human Rights Watch and participants at the United Nations Human Rights Committee -- imposes its own indirect economic costs. When Thailand was downgraded to Tier 3 on the 2014 Trafficking in Persons (TIP) report as a result of trafficking abuses in the fishing industry, the flow of non-trade related and non-humanitarian aid from the US was abruptly halted.

Although people in the fishing industry maintained that the downgrade had no immediate impact on trade deals, many prominent business figures -- including the director-general of the Trade Negotiations Department and the vice-chairman of the Thai National Shippers Council -- recognised that Thailand's international brand has deep repercussions on Thailand's export economy, and that a human rights report like TIP has the power to shift the American consumer preferences that drive US$1.6 billion of Thailand's export income.

Thailand's industry is becoming more exposed to foreign markets, so its global human rights image matters even more. According to the World Bank, exports expanded 2.6% last year, while domestic investment fell from 28% to 22% of GDP. In particular, exposure to advanced markets -- such as the United States and the EU -- is growing, markets ruled by a neoliberal paradigm in which consumers buy more from companies they believe will do good for the world. The adoption of a rights framework, particularly for vulnerable populations, is an economically effective strategy for a country whose exports increasingly depend on this demographic of socially-minded consumers. 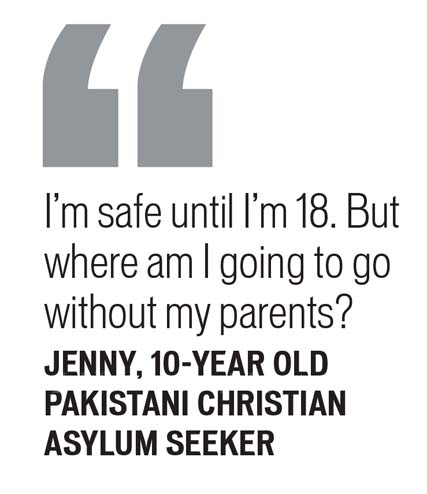 The detention system is far from the only solution to "illegal" immigration, especially not in the case of asylum seekers and refugees. Multiple institutional innovations have been trialled throughout the world, albeit under different legal systems.

In 2004, the United States' Immigration and Customs Enforcement (ICE) introduced the Intensive Supervision Appearance programme where undocumented migrants -- particularly vulnerable groups including refugees, asylum seekers and young children -- can be released from detention subject to ankle bracelet curfews, three in-person meetings with caseworkers and unannounced phone calls and visits. The programme is not perfect but is more humane and vastly more cost-effective, ranging from 30 to 500 baht per day per person.

In Canada, a similar programme exists for asylum seekers and refugees. The state-funded Toronto Bail Program tries to maximise accessibility of bail by allowing release under "supervision" requirements, which includes regular reporting requirements and unannounced visits to the asylum seeker or refugee's residence. Rates of compliance are reported at 91.6%.

In Mexico, "migrant houses" are used instead of detention centres for vulnerable populations. Asylum seekers are accommodated in houses run by Catholic churches and NGOs, with curfews and supervision. Thailand was labelled the "most generous country in the world" by 2011's World Giving Index, and most of the money was donated to religious organisations -- perhaps the Catholic Churches of Mexico could provide a template model of religiously informed social action to Thailand's Buddhist temples.

Save The Children and UNHCR have proposed multiple alternatives to the Thai detention centre, based on some of the above examples. In June 2014, the UNHCR developed a National Action Plan (NAP) in coordination with the Thai government. Promises made on paper have, however, have not been put into action.

The NAP has three goals: first, ending the detention of children; second, ensuring that alternatives to detention are legally available and implemented in practice; finally, ensuring that conditions of detention meet international standards.

In early 2017, the Thai government assured the UN Human Rights Council and the Obama Summit that there was a "no child detention policy". If you go to the IDC today, you will see five to 10 children, some young enough to be held in their parent's arms. One 10-year old Pakistani Christian asylum seeker, Jenny, looked embarrassed to be behind IDC's wire fence. "I'm safe until I'm 18," she said, "But where am I going to go without my parents?" Thailand's adoption of standards to ensure the protection, survival and development of "all children without discrimination" according to the Convention on the Rights of the Child is meaningless without substantive thought put into the care of unaccompanied minors outside of detention centres, when their parents remain caught in an increasingly restrictive legal framework.

Second, Thai authorities reserve the right to grant bail to detainees as an alternative to detention, under Article 17 of Thailand's Immigration Act. In previous years, a supervised bail system did exist, where asylum seekers or refugees could leave detention centres if they had a UNHCR case on file and were awaiting third country resettlement.

However, the bail system has not been in use since Gen Prayut's approval of harsher measures for illegal immigration in late 2015. Amnesty's most recent report criticises the Thai government over "the arbitrary revocation of bail" as well as "deportation without judicial oversight".

Meanwhile, conditions have only worsened with increased overcrowding. Detainees still sleep in shifts. In the words of one Pakistani Christian, "if you turn or move your legs -- you will lose your space". 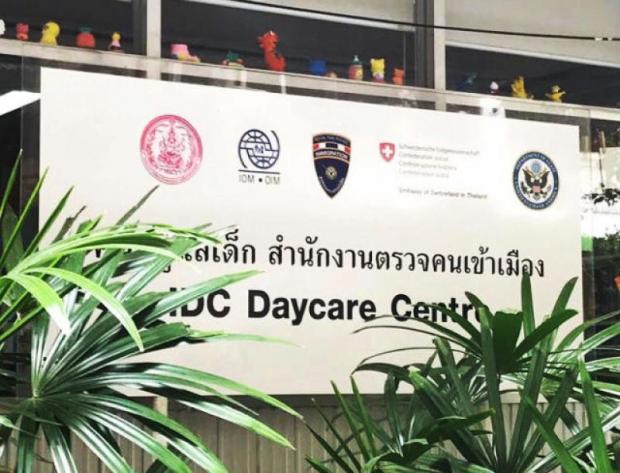 In a panel about Thailand's legal infrastructure, Dr Surakiart Sathirathai joked, "This is not Thailand 4.0, but Thailand 0.4." The statement is amusing, but the reality it describes is not. It is impossible to pretend that an economy of innovation can be born without the institutional innovations required to adapt to a globalising world.

The same transnational forces that are creating pressures for technological transformation and disruption are also creating patterns of migration that require us to think beyond the nation-state.

When Thailand's poorest citizens are sent abroad to Israel, Singapore, South Korea and the Middle East to work, it becomes evident that the modern economic project is dependent upon a world of global migration -- including the migration of asylum seekers and refugees.

Suggestions for a humane detention system have been thoroughly researched, discussed and agreed to. Such reforms give more freedom to vulnerable detainees, significantly reduce budget costs around detention, and give Thailand's human rights record more credibility.

What is needed now is the genuine political will to implement, and the foresight to see detention centre reform as central to whatever economic revival Thailand envisions for itself. 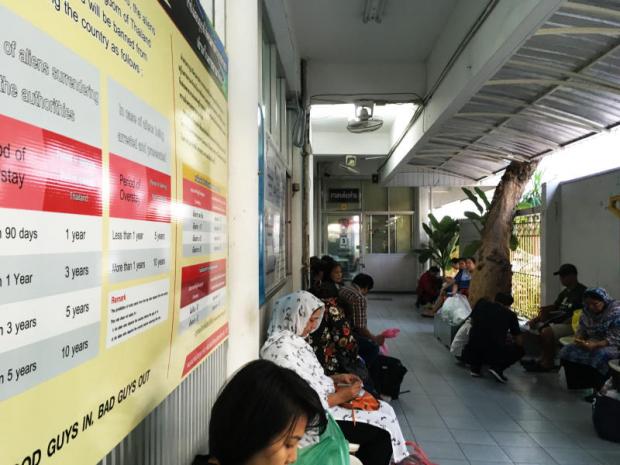 Good guys in, bad guys out: The waiting area in front of the Immigration Detention Centre in Suan Plu. PHOTO: JASMINE CHIA