In this March 12 photo, robot Robby Pepper stands at the front desk of a hotel in Peschiera del Garda, northern Ital. (AP photos)

PESCHIERA DEL GARDA, Italy: Robby Pepper can answer questions in Italian, English and German. Billed as Italy's first robot concierge, the humanoid will be deployed all season at a hotel on the popular Lake Garda to help relieve the desk staff of simple, repetitive questions.

During one of Robby's first shifts, Mihail Slanina, a guest from Moldova, congratulated the robot on his skills.

Developed by Japan's Softbank Robotics, Robby, as he has been christened by the hotel where he's resident, has been taught a list of questions such as the locations of the spa, restaurants and opening hours, programmed by the Italian digital services company Jampaa.

The summer tourist season will provide Robby with a crash course in unanticipated questions, not to mention accents, which will help improve his knowledge, vocabulary and ability to answer.

The use of such robots is growing in services sectors like tourism, where the scale of business can overwhelm staff with menial tasks. Most of the automatons serve mainly as novelties -- humanoid versions of an Alexa or Siri meant to marvel customers. They represent an expansion in automation, but one that's likely to be scaled up only when better artificial intelligence is developed.

The International Federation of Robotics, based in Frankfurt, Germany, forecasts sales of professional service robots will grow between 20% and 25% a year through 2020, from about 79,000 last year. That includes such diverse categories as defence robots, cleaning robots, medical robots and logistics systems robots.

In 2016, 7,200 public relations robots like Softbank's Pepper, used for mobile guidance and information, were sold -- a full 135% increase over the previous year. (continued below) 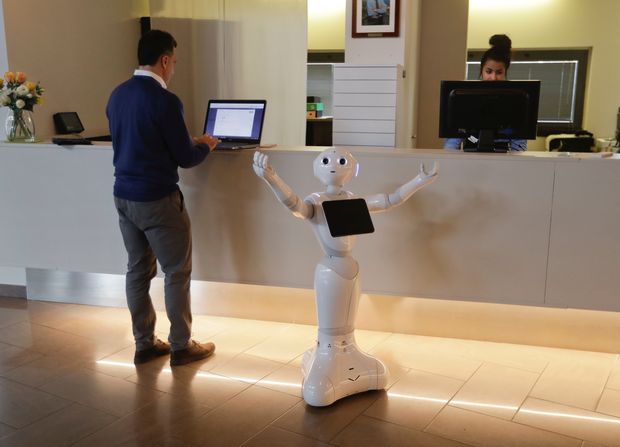 "Beyond the techy novelty to engage customers, the current use of robots for customer services is completely impractical, very simply because artificial intelligence digital agents are way too stupid to be practical beyond what the time is and what the weather is,'' said Richard Windsor, a technology analyst based in London.

Mr Windsor predicts that such robots will fall off once their current novelty wears off, only to reappear when the technology has improved, something he sees off in the long-term.

"In order to make these things better, you need to gather data, so have you have to be out there,'' he said.

Giorgio Metta, deputy scientific director at the government-funded Italian Technological Institute, said the real utility will come into play when the service robots can pick up and move objects autonomously, delivering small items to rooms, or documents from office to office.

Robots also are being used for security in say, shopping malls, to pick up on anomalies like forgotten bags, or to monitor where customers are congregating.

Public acceptance is an important factor. Robots seem to be catching on in mall and customer service settings more readily in the United States and Japan, than in Europe, according to experts.

Customers at a grocery store in Scotland got one robot, a Softbank Pepper unit named Fabio, fired because they were not willing to interact with it. And a security robot patrolling an office complex in Washington last year drew unwanted attention when it rolled into a fountain.

The Cayu dealership in Brescia is employing another Softbank Pepper unit as what well may be Italy's first robotic car dealership.

Dubbed Cayuiki, the robot has been programmed to give information on cars, play games, and gather client personal information for call-backs, its gee-whiz presence helping to create interest in passers-by who otherwise might walk right past a parked car.

"In our sector, I don't see the human factor, empathy, comfort, being replaced by a machine,'' said Andreas Barchetti, manager of the Cayu dealership, who said the robot's job is to draw people in, handle repetitive information tasks and create an aura of technological advancement. But to sell cars, he said, "of course you need our insiders made of flesh and bones''. 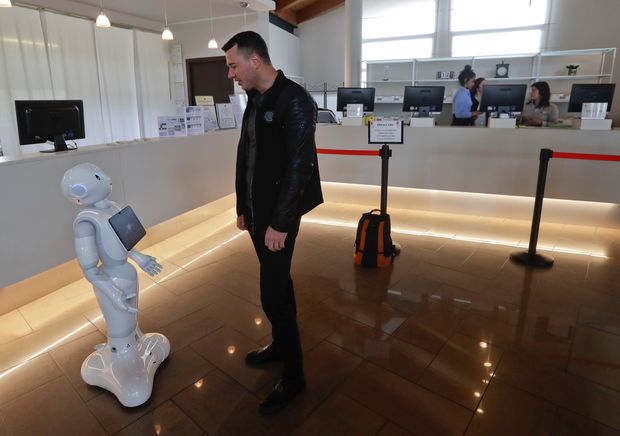