Sexual harassment: The dark side of Songkran
Life
Social & Lifestyle

Sexual harassment: The dark side of Songkran

Nearly 60% of women responding to a survey say they were groped and assaulted during the water festival, with authorities usually blaming the victim, rather than the behaviour of men

Nearly 60% of women reported that they were harassed during Songkran. Photo: Weerawong Wongpreedee

The wet and wild water fest of Songkran is set to begin nationwide tomorrow and lasts until Monday. Alcohol consumption, road accidents and even indecent twerking are issues that have been addressed by authorities. This year, sexual harassment is another pressing concern that is finally being addressed.

Songkran is infamous for groping hands during the crowded water fight from Silom to Khao San, though, sadly, the topic has rarely been addressed. And when it does, fingers often point accusingly at female victims, with the usual blame placed on revealing dresses and flesh-baring outfits that "invite" unwanted ogling and unsolicited hands.

In order to raise awareness on this dark side of Songkran, the Women and Men Progressive Movement Foundation (WMP) hosted a seminar last week to address whether sexual harassment and assaults are really influenced by a person's clothes. Several victims of harassment during Songkran were part of a panel at the Asia Hotel last week. Joining them on stage was Cindy Bishop, a supermodel who last month caused a stir when she posted a video criticising the suggestion that women should wear "appropriate outfits" to prevent sexual harassment.

Bee*, a victim of sexual harassment during Songkran and a panellist, said she was wearing a black T-shirt and knee-length shorts at a Songkran celebration when she was attacked. She had been enjoying the event with a group of friends when a group of shirtless men approached her, put powder on her face and fondled her breasts. Bee said she pushed them away and left the scene with her friends, fearing the men would try to attack her once again.

"There were other girls dressed sexily walking ahead of me. They weren't assaulted by these men, but I was. I don't understand why," Bee said. She consulted the foundation, and was advised that it could be safer if she travelled with male friends the next time she attends the festivities.

Cindy's video has given a much needed voice to the anti-harassment effort. The model posted a video on social media asking why women are always blamed for their choice of outfits. In the video, she expressed disapproval after reading a report in which authorities suggested that women dress appropriately to prevent sexual harassment and rape, in effect shifting blame for the crime to the victim.

"Women have the right to dress in any way as long as it is not obscene and illegal. Men should rather think what it is they are doing. I understand you're drunk, that you're partying with friends, but you have no right to touch a woman's body," Cindy said in the video clip, in which she also revealed that she too was sexually harassed during Songkran.

The video sparked a wide debate, with several Thai celebrities joining in to share their own stories to support hashtags #donttellmehowtodress and #tellmentorespect -- Thailand's answer to #metoo.

At the panel, Cindy said she didn't expect to become the face and defender of women's rights in the country that she has found herself to be.

"I guess many women were touched by what I said. This issue is not something that is discussed widely. Society isn't really accepting of it."

She said dictating to women how to dress is an attempt to fix the problem at the wrong end. At the same time, she also clarified that she doesn't support obscenity, as some people have taken her message wrongly. It is within a woman's right to dress as they choose in public so long as it's not illegal, Cindy said.

Looking around the room, attendees could see clothes hanging on the wall, from T-shirts and shorts to university uniforms. This is part of the What Were You Wearing? exhibition, which displays the clothes worn by victims of sexual violence when the crimes took place. The exhibition, which has been recreated in different parts of the world, aims to debunk the myth that sexual harassment and rape are caused by sexy clothing.

At the event, WMP unveiled the results of a survey they conducted last month on the Songkran experience with 1,650 women aged 10-40 years old within Bangkok. The results showed that 59.3% of respondents were molested during Songkran, and said that the forms of harassment included anything from gazing, whistling, grabbing faces and hands, to fondling body parts and genital areas. After the assault, only 25.8% reported the incident to authorities. Also, 28.1% said they choose not to participate in the Songkran water fight anymore over fears of sexual harassment and assault.

Assoc Prof Kittipat Nontapatamadul from the Faculty of Social Administration, Thammasat University said the male-dominated ideas on how women should dress and behave take advantage of women. He said some victims of sexual violence committed suicide over feelings of helplessness of the crime, and due to societal values that aggravate the wounded and don't solve the problem.

The professor said men need to realise that they have to respect women. He said that while this issue won't change overnight, he remains hopeful that -- with this year's momentum and ongoing debate -- the amount of sexual harassment during Songkran will be reduced significantly.

"It's 2018. We should all be equal in every aspect in life and places, not just during Songkran. But if for just a single week women are still being treated like this, what's left for them the rest of the 365 days?"

Jaree Srisawat, representing the WMP, said the practise of shifting blame to the victim needs to stop as it legitimises the proprietor's crime.

"This needs to change. Men can change," insisted Jaree. "Think of it as you're also doing this for your sisters."

Following the panel discussion, the floor was open for suggestions and ideas on the issue. An audience member noted that women aren't the only victims here, that transgender women also are assaulted, as many men wrongly believe it's not wrong to touch "fellow men".

Another participant suggested that if this problem persists, it would cause imitation behaviour among the younger Thais, and that harassment will be normalised and continue generation after generation.

Overall, the floor echoed that they hope this campaign to battle sexual harassment doesn't end at Songkran. Everyone wants a beautiful tradition brought back, where people can play water games freely without fear, where people act within their limits and respect one another so everyone can have a good time together.

If you're faced with sexual harassment during this Songkran water festival, report the incident to Hotline 1300, which is open 24 hours. 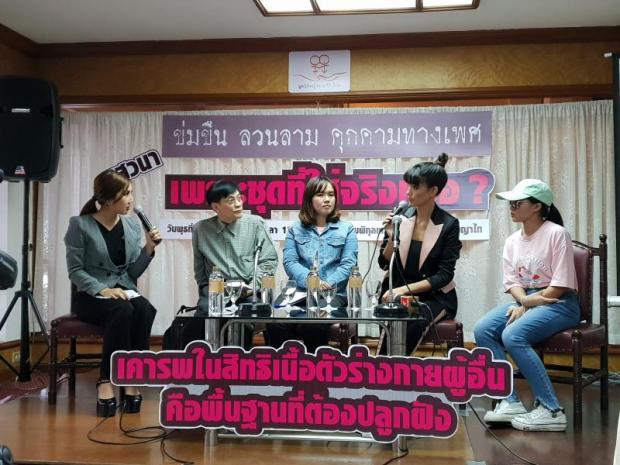 Below A panel discussion raises awareness on sexual harassment during the Songkran period. It was joined by top model Cindy Bishop (second from right), who sparked this debate on social media. Photo: Melalin Mahavongtrakul 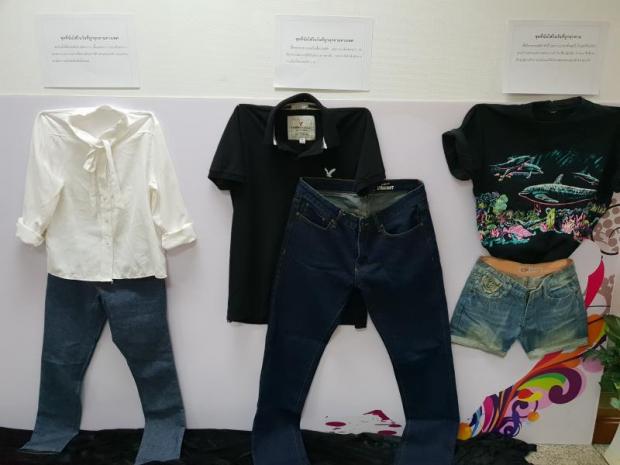 Some of the clothes worn by victims of sexual assaults were on display during the panel. Photos: Melalin Mahavongtrakul 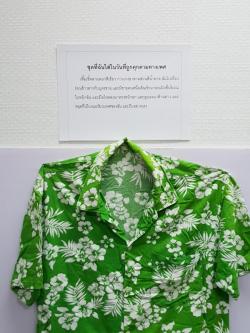