Is Chinese durian love a fad or forever?
Business

Is Chinese durian love a fad or forever?

While short-term prospects are bright for the notoriously noisome and nutritious fruit, daunting challenges lie ahead for Thai growers

With Thai durian selling fast to Chinese connoisseurs, questions have arisen over whether the phenomenon is just hype or signals a promising future for the king of fruits.

Aat Pisanwanich, director of the Center for International Trade Studies under the University of the Thai Chamber of Commerce (UTCC), says Thai durian has bright prospects in the short term.

But he worries that over the next 5-10 years, Thai premium fruits may encounter daunting challenges, particularly in terms of consistent production quality, additional supply from other producing nations and heavy reliance on China and Hong Kong.

Mr Aat says Thailand is estimated to produce 600,000 tonnes of durians this year. Higher demand and decent prices may lure Thai farmers to grow more durians, leading to excessive supply over the next decade, he says.

"More importantly, durian is an Asean fruit for which every country can grow its own indigenous varieties, while all producing countries are focusing on the same market," Mr Aat says. "This is quite risky for the future, and fiercer competition is definitely anticipated."

In Thailand, there are over 234 varieties registered with the government, of which 60-80 are commercially cultivated. Of all the cultivated durian areas in Thailand, Monthong accounts for 41%, Chanee 33%, Kan Yau 5% and Kra Dum Thong 2%, while the rest are minor varieties.

While Thailand owns Monthong, Chanee and Kaan Yao, Malaysia's Agriculture Department said that country owns over 126 durian varieties, with the Raja Kunyit or Musang King the best-selling one.

There are many more varieties found in the other Indonesian islands, especially in Sumatra.

According to Statistics Portal, Indonesia produced 996,540 tonnes of durian in 2015, with production in 2016 estimated at 1 million tonnes.

Cambodia also has its own durian varieties, producing 33,000 tonnes a year. An eponymous variety from Kampot province, some 340km from Thailand's Trat province, is Cambodia's most famous.

The Philippines is actively expanding durian production, especially in the typhoon-free areas in Mindanao. In that country, durian trees grow almost exclusive in Mindanao, particularly in Davao, Cotabato, Sulu and Agusan.

Southern Mindanao is considered the "durian republic" of the Philippines.

Popular durian cultivars include two local selections and four that were introduced -- Chanee, Monthong, Umali and CA 3266 -- on top of hundreds of local varieties that are not registered.

In 2017, world durian production reached 2.2 million tonnes, with demand estimated at only 700,000 tonnes, according to statistics from the World Trade Atlas.

China and Hong Kong were the leading markets, accounting for 90% of consumption. Strong demand was also witnessed in South Korea.

Mr Aat says every Asean country has been ramping up production, developing their own quality varieties and brands, and durian prices may be subject to drastic falls if the Chinese market hits a slump or excessive supply enters the market.

"The partnership with the Chinese e-commerce provider is a good effort, as this will help for better quality and standard development of Thai durians," Mr Aat says. "But the government is also needed to help enhance Thai farming cooperatives' export competitiveness and upgrade them to be able to directly deal with foreign buyers."

Mr Aat says the government should come up with better durian production and quality management to cope with future risks. He cites Malaysia as a good example of a government fostering the whole durian system.

For example, the Malaysian Federal Agricultural Marketing Authority is engaged in contract farming with small-scale and independent farmers, buying the farmers' products at fair prices, providing advisory services on marketing and packaging, as well as helping them develop export competency.

Pramoj Ruamsuke, an adviser to the Thai Chamber of Commerce's Eastern Economic Development Committee, says Cambodia is likely to emerge as one of the key competitors, as it has bought more than 1 million tonnes of seedlings from Thailand.

"What we should closely watch is the possible growth in exports of famous varieties which may not originate in Thailand," he says. "For instance, Chinese operators who succeed in developing their own Monthong brand may import famous varieties grown in other countries such as Malaysia, Indonesia or Cambodia, rather than Thailand."

Mr Pramoj says one of the key problems is durian pricing, which is not set by farmers but by Chinese dealers and buyers, while the Thai government has yet to come up with an effective durian production and marketing management plan.

"There is no individual agency tasked with handling durian management, export and distribution competency," Mr Pramoj says. "The market is now totally manipulated by the Chinese."

Commerce Minister Sontirat Sontijirawong says the ministry is scheduled to talk with the Agriculture and Cooperatives Ministry to evaluate the country's durian production and future management plan, as well as come up with new measures to strengthen farmers' competence and competitiveness.

"The partnership with Alibaba is a vital transition for Thai fruit exports," Mr Sontirat says. "It helps expand marketing channels for Thai fruits and upgrade product quality development. But Alibaba is not the sole partner, as the government has also partnered with other Chinese online retailers."

JD.com has been tasked with upgrading the ministry's own business-to-business e-marketplace, while Thaitrade.com will help create more opportunities for Thai exports.

Some 23,000 entrepreneurs now use Thaitrade.com.

The ministry has set its sights on persuading 100,000 entrepreneurs to use the national e-commerce platform to increase their exports.

The ministry is looking for partnerships with renowned international e-commerce firms in the US, Europe, China, India, Africa and the Middle East via Thaitrade.com.

The goal is to export as many Thai products as possible through online channels and raise transaction value on the national e-commerce platform by 1 billion baht to reach 5.5 billion this year.

Business-to-government transactions generated 324 billion baht or 11.6%, according to the Electronic Transactions Development Agency.

Thailand's e-commerce value is predicted to top 5 trillion baht by 2021, the agency reported.

The Commerce Ministry says Thailand's fresh, frozen and dried fruit exports to the world market fetched 76 billion baht in 2017, up 40% from the year before.

Gao Meng Di, quality control manager of TMall, Alibaba's B2C marketplace, says this year is the first time that the company has sent its quality control staff to work with local dealers at key durian production sites to supervise logistics services and packaging.

TMall mainly buys durian from Thailand, Malaysia and Vietnam, with Thai durian making up 60% of total purchases, primarily because the Thai fruit is relatively cheaper than Malaysian varieties and transport costs are lower. 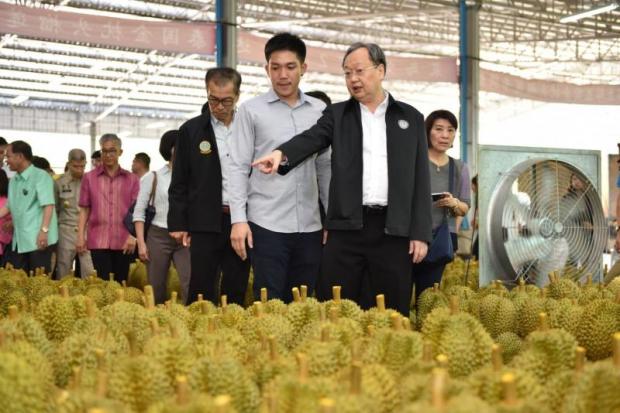 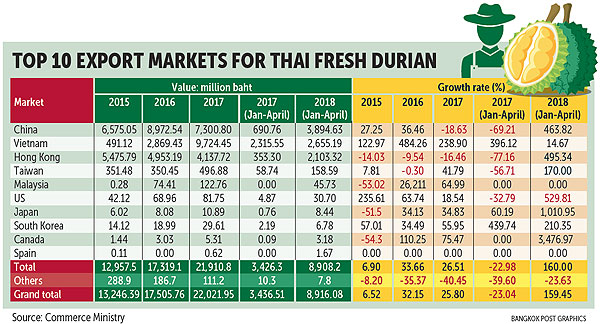