Workers are loading durian into boxes to ship to China.

China's growing thirst for the king of fruits has built Thai durian farmers' wealth in recent years, but the dominance of Chinese traders has made dealers nervous about the possibility of price collusion.

Dealers seeking durian from farmers are often Thai, but some Chinese traders are using them as nominees, aiming to control purchase orders, as well as set prices and the harvest time, said Thongchai Kunnam, a 58-year-old durian exporter in Chanthaburi province.

Some 70% of durian is estimated for export, with China being the largest market. There are 50,000 families farming durian, with production in 2016 totalling 302,000 tonnes.

Chinese dealers have played a vital role in the durian sales process, with the exception of purchase negotiations with farmers, which remains a Thai affair, he said. 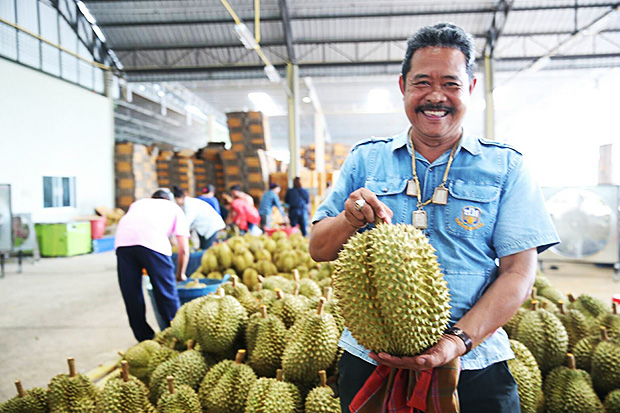 Thongchai Kunnam, a durian exporter in Chanthaburi province, shows off one of his beauties.

"I don't know whether Chinese dealers will be able to collude to cut the purchase price for farmers, but the government should set out regulations to prevent it," said Mr Thongchai.

China in April imported 56,000 tonnes of Thai durian -- almost half of all the durian exported.

Around 80,000 monthong durians were scooped up by Chinese consumers the minute after Alibaba's Tmall.com went live in April, demonstrating strong demand for the fruit. 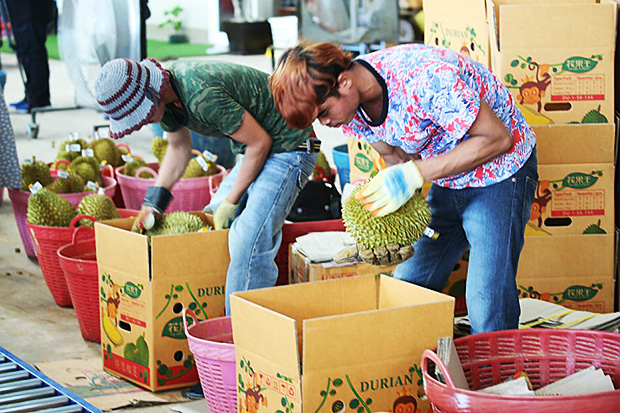 Over the past 5-6 years, durian prices have steadily shot up, cushioning farmers' bottom lines.

He said the number of new cars purchased by durian farmers is the best indicator of rising income.

To balance the power of Chinese dealers, Mr Thongchai said durian farmers should join forces to set up a fund serving as a buffer for when the price falls.

If the durian price is set at 80 baht per kilogramme, the portion of sales above that level would be remitted to the fund, but farmers would still get 80 baht if the market price drops below the threshold, he said.

Mr Thongchai said the problem of unripe durian sales has subsided this year, adding fruit dealers must control quality, ensuring it is ready to eat when shipped to China.

Placing stickers on the output of durian farms is another method to help control quality as these orchards will look to safeguard their reputations, he said.

Apirom Sukprasert, president of the Bank for Agriculture and Agricultural Cooperatives (BAAC), said calls for durian growers to bind together to counter the influence of Chinese dealers would not be fruitful, as the time constraints for durian supply release pushes them to compete with each other. 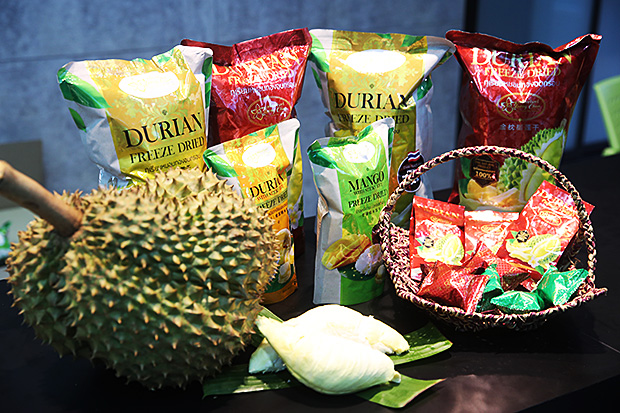 Fresh as well as freeze-dried durian, which RTC Golden claims adds value to the fruit.

He said longan prices, for example, initially increased when Chinese dealers directly bought the fruit from farmers, but eventually fell as those dealers came to dominate the market.

The state-backed farm bank has tried to help agricultural cooperatives play a role in reducing the clout of Chinese dealers, who are opposed to such efforts and have many ways to bring down prices, said Mr Apirom.

Processing can add value to durian and help push up its price, particularly for those small in size, he said.

RTC Golden has sought a 20-million-baht loan from BAAC to build a cold storage facility for fresh durian, particularly when its price is low.

But no such plant is permitted at fruit plantations in Chanthaburi, while a cold storage room with a 50-horsepower motor is designated as a plant, requiring a licence from the Department of Industrial Works.

Waivat Phongsuk, a durian orchard owner and farm tour operator in Rayong province, said he has decided to bypass fruit dealers by directly selling durian to end-consumers and merchants at a 50:50 ratio.

He said online channels also give him direct access to consumers.

Logistics is the biggest problem for online durian vendors, but their cost can be double that of the market price as they have been selected for quality, with sellers offering replacements or refunds if the buyers are not satisfied, said Mr Waivat.

He said return orders account for only 10% of the total, with the biggest problem being consumers peel the durian too fast instead of waiting for 3-5 days after receiving them.

Thailand Post now ships durian, but it is dispatched with other goods, which can cause damage to the fruit, said Mr Waivat.