Putting out feelers in the cricket market
Business

Putting out feelers in the cricket market

While the crispy critters have long been a staple of rural Thai diets, a foreign trio are looking to break through the taboo barrier and make the protein-rich insects palatable to Western consumers.

From an isolated enclave on the outskirts of Chiang Mai, one Frenchman and a couple of Czechs are vying to make crickets the next big foodie fad in the West.

The trio gave Cricket Lab its first test run in March 2018. The facility boasts maximum capacity of 3.5 tonnes of cricket flour per month, a quantity "that is already quite large for the market", said Radek Husek, chief marketing officer of Cricket Lab and co-founder of Sens, one of the two largest producers of protein bars made from cricket flour.

The tin building resembles an aircraft hangar. It is dark and sweltering, though temperature is strictly regulated. Crickets are born and slaughtered in the same building -- a process that lasts about 30 days.

"These are extremely primal animals, which is why you don't see a lot of them jumping around, even though the crates on which we have them are open," Mr Husek said.

Mature crickets are run through a multi-step process that includes freezing them before they are pasteurised, ground and dried in a six-metre tower. The end result, not unlike cocoa powder, is used in an assortment of "mainstream foods" such as bread, pasta and protein bars.

Edible insects have been a part of human diets for thousands of years and currently constitute up to 20% of the protein in some communities in Latin America and Africa. They are also common in rural parts of Asia, including Thailand (whole or in chilli paste), and as ingredients in fortified products.

There are close to 20,000 cricket farms in Thailand, located in 53 out of 76 provinces, according to the UN Food and Agriculture Organization.

Despite their long history, every major meat market dwarfs that of edible insects. The global market for cow beef tops US$2 trillion (66.6 trillion baht), while the market for edible insects is projected to reach $250 million in 2018.

The product remains a niche market everywhere, and is taboo in most North American and European communities. But Mr Husek says introducing cricket powder into common foods like bread is a gateway to a more insect-heavy diet.

Sens is his first stab at the broad commercial market. The company was founded two years ago in conjunction with Daniel Vach, chief financial officer of Cricket Lab, selling tens of thousands of bars in Germany and Europe.

"The goal is to hit the 50,000 bars per month mark by the end of this year, and expand to the German and Scandinavian markets by next year," Mr Husek said.

Last year, the Czech entrepreneurs decided to expand their business to cricket powder, along with Prague-based investor Michal Dedek and Nicolas Bery, chief executive of Cricket Lab, who had been in the insect business for about five years and served as Sens's main supplier.

"People are buying these products because they are made with crickets, but they don't want to imagine the insects running around in the wild," Mr Husek said. "[Our product] remains premium, and most sellers advertise its environmental and nutritional advantages."

"That is the closest we get to crickets in our packaging," Mr Husek said. "We also made an effort to make very normal flavours like pineapple coconut and peanut butter cinnamon, something Western consumers are already used to."

The goal is to lower costs enough to make the product attractive to large companies, he says. But it may be years before producers in Thailand and elsewhere reach that point.

There has been some interest on the part of food conglomerates, but conversations are still in the beginning stages.

"Big Food has been hesitant, in part, because current producers have not yet built sufficient capacity to make it worthwhile," Mr Husek said.

A kilogramme of cricket powder retails for 800-1500 baht, depending on supply and demand -- 3-5 times more expensive than red beef.

The high costs are reflected in the products. Sens bars, for example, retail for €2-2.5 a piece, depending on protein content; the more expensive one contains 150 crickets, three times more than its lighter counterpart.

While in line with many premium protein bars in the market, Sens and EXO may still be too expensive to compete head-to-head with convenience store snacks. Currently, most cricket products remain in supplement stores or gyms, where they find a home among vegans and other special diet practitioners.

"About a third of Sens consumers are vegans," Mr Husek said. "For them there is a difference between killing a cow and killing a cricket. For one, crickets don't have pain receptors."

Why prices are so high must be something of a puzzle to casual onlookers. After all, crickets require 12 times less feed, 2,000 times less water and much less space than traditional meat sources. Breeding is also less labour-intensive than for cows or chickens.

"It comes down to inputs and economies of scale," Mr Husek said. "The majority of farmers are small mom-and-pop enterprises that cannot negotiate with suppliers. There has also been a lot less research in this area, so naturally cost-cutting opportunities have not yet been identified."

Mr Husek declined to give details on Cricket Lab's cost structure, but he said that with SENS they had a healthy margin for the retail business in the food industry.

It may be years until food giants decide to invest in insect products, but a licensing model could provide at least a temporary solution to the licensing problems.

"We could transmit our farming techniques and technologies to local farmers for a fee, or perhaps we can teach them for free in exchange for an exclusivity contract," Mr Husek said. "The contract would ensure that they sell or process their harvest only at our facilities." 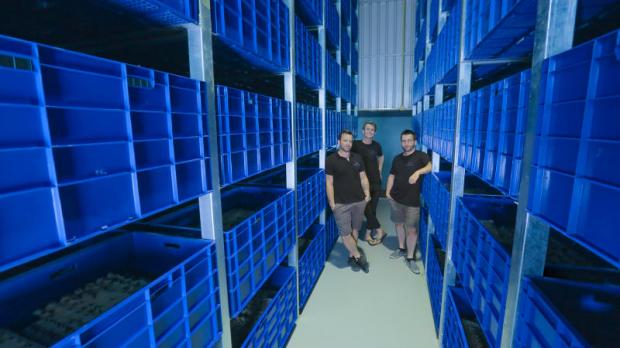