Crisis of faith within Buddhism?

Our monastic community has long been a spiritual shelter for Thai society, with our Buddhist monks long held in high regard.

This might no longer be a familiar scenario, though, with a series of bad news about indecent behaviour and misconduct of many monastic members having put the clergy in a negative light as never before. Stories of monks caught in scandalous acts and unbecoming activities appear on a weekly basis. To top that off, the recent cases of several high-ranking monks allegedly involving with the so-called "change money" scheme -- in short, a corruption scandal with top monks at the helm -- has prompted many Buddhists to wonder what is happening to our priests, and whether Buddhism is encountering a crisis of faith. 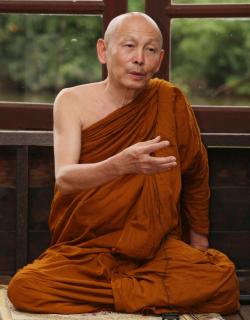 "It's common for people who have lived far from the monasteries to have this faith issue," said Phra Paisal Visalo, abbot of Wat Pa Sukato in Chaiyaphum province. "But those who are close with the temples understand well that there are both good and bad monks out there, and they're not easily shaken by the scandals."

He related the way many Buddhists have planted their faith on individual monks, and how faith in the religion has suffered after their favourite priests have been found to be flawed. He then stressed that Buddhist principles teach us to focus our faith on the Triple Gem -- the Buddha, the dhamma and the sangha. "The point is that the sangha here doesn't mean those with shaved heads who wear the saffron robes but ariya song," he said.

This term refers to the noble monk who has reached at least one of the four stages of spiritual enlightenment in Buddhism, and any layperson who can achieve the same thing are also counted as such. The term is the opposite of sommuti song, or a monk by name, robe, or reputation only.

"Even though we can't tell which ones are ariya song, we can be assured that those who've committed immoral affairs as mentioned in the news reports are not," he said. "They don't deserve our faith because they don't truly represent the disciples who are bound to train themselves in accordance with Buddha's teachings."

Having lived a monastic life for 35 years and devoting most of his time to writing books on the environment and Buddhism, as well as teaching dhamma and meditation, Phra Paisal is one of the country's most respected monks, whose nonviolence-based way of thinking and profound perspectives on the problems surrounding the Buddhist community are inspiring many followers. Before entering the monkhood, Paisal was known as a student-activist at Thammasat University who staged a hunger strike during the Oct 6, 1976, student protests, an incident that led to bloodshed on the campus. He was rounded up and jailed briefly.

He was ordained as a monk in 1983, and has since become known as a clergy with a progressive outlook on Buddhism and its contemporary relevance. 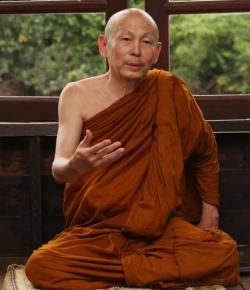 "The scandals about the troubled monks are a reflection of the deep-rooted problem of the whole sangha system, and the real cause lies with the flaws of the monastic education and also the sangha administration," he said, adding that "our monastic education is weak and outdated and hardly helps to bring about spiritual change to the novices and monks".

According to the 61-year-old priest, monastic education last had a major makeover during the reign of King Rama VI, when the 10th Supreme Patriarch, Phramahasamanachao Vajirananavarorasa (1910-1921), created a new curriculum for dhamma studies. However, this modernised system heavily focuses on textual and scriptural teaching, leaving behind the teaching of meditation practice, which is the most essential part of Buddhism. "This is where meditation started to disappear from monks' lives," he said.

He explained that meditation is very important for monks, especially today, when tempting things are everywhere. "If they are not trained to be strong from the inside, they would be easily distracted and their greed will grow together with those stimuli," he warned.

In his eyes, however, even meditation alone is not enough for monks to survive today. "They must be able to understand this modern world and know how to wisely deal with new technology; they should know how to properly associate with mobile phones and also money," he said.

Despite the shortcomings of this century-old educational system for Thai monks, which he said is in dire need of reform, we have yet to see any attempt by the senior monks responsible for making a change.

"They've grown up with it and believe that it's already wonderful. They only want to keep it that way," said Phra Paisal. He also elaborated with a sad truth: "They don't see the importance of meditation because they've not practised it."

He also attributed the long-standing problem about bad monks to the weakness of the sangha administration, which he described as inefficient, lax and passive, adding that the worst is that many senior monks on the top jobs are also engaged with indecent affairs -- namely, bribery and cronyism. "This problem has nothing to do with the religion [itself] but the monks, the temples and the whole sangha community," he concluded.

Such failure might have a lot to say about why there is growing concern from many that Buddhism might soon decline in Thailand. Also, this is probably why we have seen a growing trend of religious extremism, which many claim to be an attempt to protect the religion, in our society, in recent years.

From Phra Paisal's perspective, the movement is not new and it is the result of many factors. "One of them is a sense of insecurity of some monks, who are afraid of losing their own status if people turn their back on Buddhism," he said. "Instead of looking back to see where they've gone wrong to cause all the problems, they simply put the blame on other religions for being behind this fallout. Thirty years ago, Christianity was branded as the culprit, but now they point the finger at Islam."

He further explained that nationalism also plays a big role in fuelling a hostile attitude towards other religions, saying that this secular phenomenon is very prominent in Myanmar, where the Rohingya minority, despite having lived there for generations, are never recognised as Myanmar citizens because they hold the Islamic faith.

"Buddhism in Thailand is strictly treated as part of nationalism, and what ensues is an attempt to define 'being Thai' as 'being Buddhist'. This means that only those who hold the Buddhist faith are considered Thai, and if you're Christian or Muslim, you're not regarded as a real Thai," he said.

He said that all monks should be able to understand the conventional nature of all religions and nationalities. "People of any faith are our human fellows. Their beliefs are just different from ours and they have their own ways of training their souls. But, finally, they might be doing good deeds and refraining from bad deeds just like what our Lord Buddha taught us," he said.

Phra Paisal also insisted that the real threat to Buddhism is not other religions but consumerism, which, he said, has driven many monks to stray from Buddha's teachings, leaving behind the practice of meditation, turning their backs on simple living and beginning to accumulate material things.

Likewise, the theory has a lot of influence on the way Thai Buddhists are treating the religion so far. "In fact, most of them are the followers of consumerism. They care about getting rich and only want the monks to bless them with good fortune. Buddhism is being made a religious form of consumerism," he remarked.

In order to protect Buddhism, the monk said that we must turn to look back at ourselves and see the truth that our religion is weakening because of us all. "We must dare criticise ourselves and also improve ourselves. We should bring Buddha's words to remind us. He said that Buddhism will not survive unless his followers put his teachings into practice."

Phra Paisal's outlook should be food for thought for all Buddhist faithfuls to ponder. He also wished that they spend this three-month period seriously refining themselves. "They should live close with dhamma and understand the truth about life so that they won't suffer much when facing its uncertainty. They shouldn't set money as the goal of their lives but rather spiritual cultivation," he said.

Asked what he would like to see in the new generation of monks who wish to follow in Buddha's footsteps, Phra Paisal said: "They must train themselves to achieve virtue, concentration and wisdom. They should be neat, less selfish and able to free themselves from suffering and also help others." And, most importantly: "They must be broad-minded and have compassion for everyone regardless of their race, language and faith."

Chinese President Xi Jinping has verbally confirmed his participation at the Asia-Pacific Economic Cooperation (Apec) summit in Bangkok on Nov 18-19.