The criminal Chinese dragon lady known as 'Mulan' controls much of the international smuggling of heavily regulated phayung or Siamese rosewood. (File photo)

Last week marked a milestone for anti-poaching campaigners. Usually, forest patrols are only able to net the small fish -- hired poachers -- but hardly ever a ringleader.

But the arrest of retired senior air force officer AVM Surachai Khongthet in Samut Prakan on Saturday has boosted the morale of police, soldiers and officials at the Ministry of Natural Resources and Environment who spend their lives attempting to stop poaching.

AVM Surachai is suspected of masterminding the smuggling of rare wood to China.

On Aug 29, police issued a warrant for the arrest of his former wife, Chalida Suphanthamat, a 40-year-old Chinese national nicknamed Mulan, for serious wood poaching offences.

This came after police raided a workshop in Surin's Kap Choeng district on the same day and seized illegally obtained wood believed to be destined for overseas.

Police investigators then searched the home of AVM Surachai in Samut Prakan's Muang district on Saturday after finding he had allegedly rented the warehouse where 412 logs of wood, worth 36 million baht, were hidden.

The 63-year-old retired officer was taken for questioning but was later released on bail having denied all allegations. 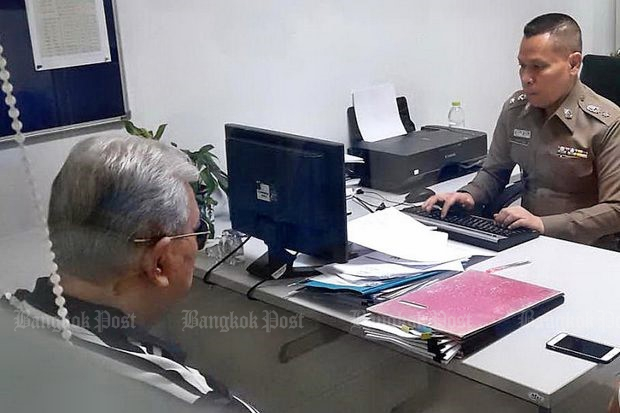 It is not the first time AVM Surachai has been arrested. In 2012, he was also detained in relation to wood-poaching activities but was freed due to weak evidence. Since then, police have kept an eye on him and his former wife.

Ms Chalida is still at large after being implicated as a member of transnational operation involved in the smuggling of protected phayung (Siamese rosewood) out of the country, according to Bang Pu Police chief Pol Col Prawit Buntham.

During the search at AVM Surachai's house, the officers found a photo of him and Ms Chalida and other documents showing that had scores of bank accounts.

Police have revealed that Chalida Suphanthamat is not the real name of AVM Surachai's ex-wife.

What they do know is that she entered the country over a decade ago and became a timber and wood broker with firms in China.

Mulan is a truly unusual character. It is believed that she made an appearance on the TV show, Thailand's Got Talent in 2013 under the name "Luxia", singing My Heart Will Go On.

Police say she is a street-smart and elusive smuggler. It is believed she was present among a number of smugglers whose warehouse was raided recently in Surin, but she pretended to be an interpreter at the scene and sneaked away.

Her business was active in the Northeast, including Surin, Si Saket, Buri Ram, Ubon Ratchathani and Nong Khai, all of which are known for their abundance of Siamese rosewood and phayung, a deep dark cherry wood sought for furniture in China.

Another zone where Mulan's network was surveilled is the area around Lampang, Phrae, Nan and Phayao, the best source of rosewood in the country.

A single fully grown Siamese rosewood tree, which would normally be around 50 centimetres in diameter, can bring in a fortune of at least one million baht.

The Mulan gang is professional smuggling ring and has most likely had help from influential people and officials, say police.

It is believed that the team also contains a number of forest officials who led the smugglers to the valuable trees and helped with the transportation of the wood to ports for export, according to Col Pongphet Gatesupha, a regional chief of special operations at the Internal Security Operations Command (Isoc). 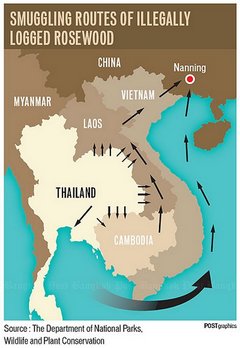 The wood is usually stored at rental warehouses nearby the ports, the most frequently used being in Chiang Rai's Chiang Saen district where it takes around four days to sail to China using a route via Laos.

Another popular port among criminals is the sea port in Laem Chabang in Chonburi province, where the gang rents warehouses in Chon Buri's Sriracha district and Samut Prakan province.

"It is so sad that we have some Thai people working with foreigners to betray the country. She couldn't have done it alone without support from authorities. Now, we are racing against time to find the rest of the culprits," said Col Pongphet.

After arresting her former husband, police are working with the Anti-Money Laundering Office to examine transactions between her and AVM Surachai.

Unfortunately, police believe she might have already fled to a neighbouring country.