Seeing the langsat for the trees
Thailand
Special Report

Seeing the langsat for the trees

Langsat, a sweet fruit with a leathery yellowish skin, once served as the pride of Uttaradit province. Not anymore. 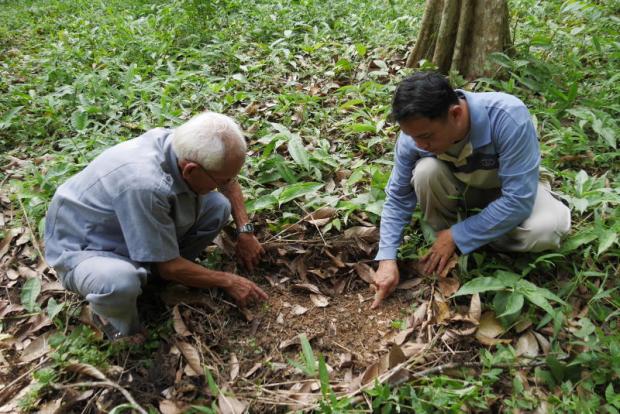 But a group of local people are determined to restore the fame of their cherished fruit and show Thailand how their forest-like orchards can help combat deforestation.

"Langsat is a part of our identity," said Thaweesak Boondantrakul, 72, a veteran orchard farmer. "Our langsat are so famous they are literally included in the slogan representing Uttaradit's identity.

"Despite that, people are still forgetting about it. Restoring the fame of this local fruit is tantamount to restoring part of our identity."

"We also want to show people how our orchards based on agroforestry are crucial in helping to conserve forests," he added.

Mr Thaweesak is not the only man on a mission. He's part of a group of farmers who grow langsat organically along with other fruit trees under the forest canopy. Some of the trees are over 100 years old.

Langsat is an oval-shaped fruit with thin skin and sweet, almost translucent meat. It was hugely popular in Thailand about 50 years ago. But oversupply caused prices to plunge, from 135 baht per kilo to just 5 baht. Most farmers cut the trees down to grow longgong instead. Longgong belongs to the same family as langsat but is fleshier and easier to peel. 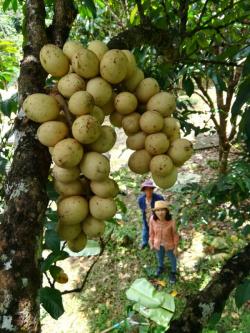 Bunches of ripe langsat hang heavy, ready to be collected in an agroforest orchard in Uttaradit. Photo courtesy of Lemon Farm

Like other langsat aficionados, Mr Taweesak insisted its waning popularity was not just a result of oversupply but also due to the "sloppy" manner in which it was cultivated and collected.

"The fruit needs to be ripe and carefully cut by hand, bunch by bunch, to be at its best. But greedy merchants grab it before that so it doesn't taste sweet, while the skin contains a lot of sticky resin. This has left buyers feeling disappointed and many have since switched over to longgong instead," he said.

Although Mr Thaweesak, like many langsat growers in the province, cut many of his langsat trees down to grow longgong instead, he kept many for his own family's consumption. Eating langsat with rice is common in Uttaradit, especially among elderly people.

"I kept it for my mum and dad because they still love it," he said.

When it is no longer cost-effective to collect langsat for sale, and too costly to tend to them or hire people to cut the trees, most orchard farmers in Uttaradit just leave their langsat trees to grow naturally as part of the forest landscape. As a result, the province has Thailand's largest and oldest langsat orchards.

But now local farmers want people to re-experience the original taste of langsat.

The campaign started at Uttaradit Rajabhat University when a group of lecturers wanted to help local farmers promote their business projects. Langsat soon came up as it is so closely entwined with the provincial identity. The idea struck a chord with many farmers who were proud of their langsat heritage and wanted to revive it.

However, the move to revive people's love for this fruit faces a number of challenges.

For starters, collecting langsat by hand is not only laborious and costly -- it's also difficult to find fruit collectors who take the time and care required.

In addition, langsat do not ripen at the same time, even if they are growing on the same tree, which complicates the picking process. Too little ripe fruit means they cannot cover the high cost of logistics.

The next issue is how to market the fruit given that it hasn't changed in centuries except for its recently won bad reputation.

"Since people now have something of negative image of langsat, we need to raise awareness among consumers that if it is collected when ripe, our local langsat are very sweet and easy to peel," said Piyawan Panlas, leader of the langsat revival project.

"Moreover, our crops are healthy as they are tended to naturally and are free of any potentially harmful farm chemicals," she added.

But can buyers be reassured they are for real, and who would trust simple orchard farmers to deliver on their promises of sweet langsat in the absence of personal connections?

Official certifications are out of reach for most as the fees are extremely expensive for small-scale farmers. These also require land ownership documents the growers do not have as they grow their langsat and other fruit trees in nearby forests.

When logging concessions ended in the late 1960s, local people moved in to till the land but left other trees standing so they could experiment with agroforestry. Without further land clearings, the natural ecological system of the forest was soon restored and the trees sprouted up under the forest canopy.

The government still considers the area state-owned, however, which posits the orchard farmers as illegal forest encroachers. However, provincial authorities leave them alone, knowing they are producing a variety of fruit to help make Uttaradit more widely known and environmentally friendly.

The farmers' certification worries were lifted when Lemon Farm, a social enterprise promoting green food and green farming with its own supermarkets, introduced them to the PGS system -- a peer-to-peer scheme that enables them to monitor and cross check one another's produce together with external inspectors.

The system is certified by the government. Lemon Farm also buys organic langsat for its outlets to support agroforestry in the province. An extensive network of langsat roots also helps to curb soil erosion and stop landslides preemptively.

"We must make use of consumers' need for healthy food to strengthen ecological farming and empower organic farmers," said Suwanna Langnamsang, managing director of Lemon Farm.

To prepare for the next crop of langsat, which will be sold in Bangkok from September to October only, Mr Thaweesak led a group of inspectors to check his organic orchard, walking briskly through the hilly area, his back straight, eyes beaming with pride.

It's not exactly an orchard -- more a lush forest where langsat and other fruit trees such as longgong, mangosteen, marian plum, ramyai, and a wide variety of indigenous durian grown in the forest.

The inspectors include a group of organic orchard farmers in Uttaradit and external, independent auditors. The inspection occurs several times each year to ensure the farming system remains organic.

"We take the inspection seriously because if only one member is using farm chemicals, our whole group will be axed," said Mr Thaweesak.

The inspection tour also poses as a chance for the orchard farmers to exchange their problems and solutions.

"We learn from one another," he said. "Being part of this group, for me, is not only about money. It's about a sense of community, that we're not alone in preserving our way of farming that respects nature, that we're moving in the right direction."

Toxic farm chemicals that pose a threat to both the environment and public health are not necessary in such forest-like orchards, he explained.

The soil is thickly covered with grass, which helps the soil to retain moisture. Moreover, when it is cut and left on the found, the dried grass becomes a natural fertiliser, along with dry leaves from forest trees. The wide variety of trees and plants also helps to prevent outbreaks of disease.

Watering is unnecessary as the forest canopy keeps the area moist and cool. The soil also gains more moisture from the roots of big trees that contain a lot of water.

"We can farm organically if we understand and learn from how nature works," said Mr Thaweesak.

He grins and points to a gigantic sapung tree. "The forests still have many big trees because we protect them. We know they are important to our livelihood."

Millions live and farm in the forests like Mr Thaweesak. But many eventually find themselves evicted or sent to jail instead of being viewed as partners in forest conservation like Thaweesak and other agroforestry farmers in Uttaradit.

"If they had the same chance as us, they would help to protect the forest like we do because that's our source of identity and livelihood," he said. 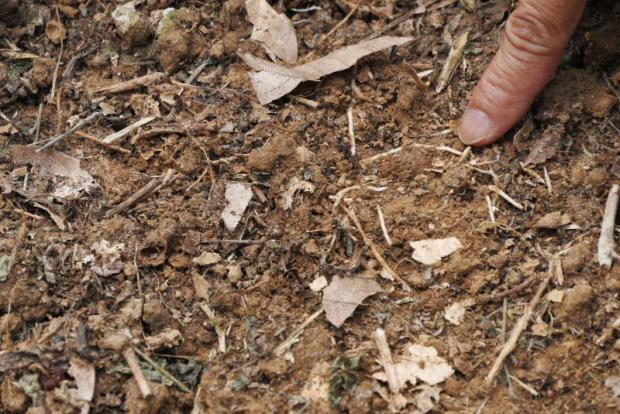 The langsat trees grow on fertile soil which, in turn, is kept intact by trees' roots. Sanitsuda Ekachai 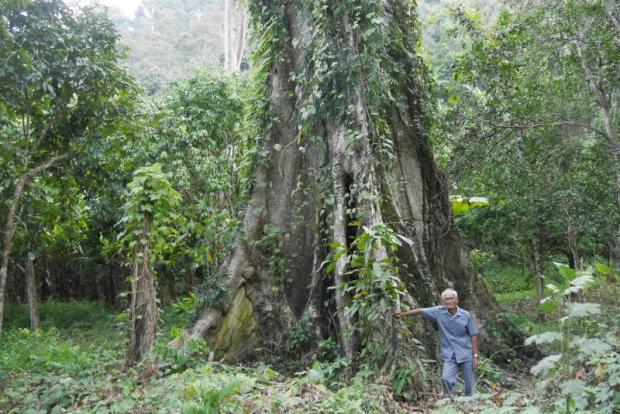