CATCH OF THE DAY: A fisherman in Samor Riang coastal community in Prachuap Khiri Khan's Hua Hin district moors his fishing boat. The man said his small business had not been affected by a labour shortage which mostly impacts large scale operations.

The Labour Ministry's recent move to recruit additional migrant workers through a memorandum of understanding (MoU) system is a boost for the commercial fishing sector, which has suffered from a labour shortage.

Since the government launched a crackdown on migrant labourers, the fishing industry saw the amount of migrant workers reduced from 110,000 down to about 50,000.

The MoU policy has been perceived as a tool to help the industry find crews for fishing vessels. 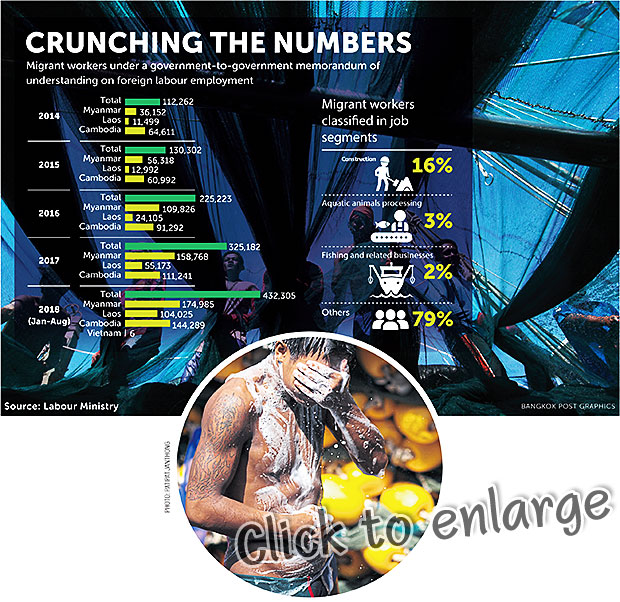 Hiring migrant workers under the MoU system is one of three measures the ministry has come up with to address labour shortages that have put the industry in a bind.

Apart from the MoU policy, there are two other legal avenues for hiring migrant workers.

First is extending work permits for about 11,000 migrant workers, whose work permits are due to expire at the end of this month, for another two years.

Second is allowing migrant workers who hold valid passports, certificates of identity or other travel documents to register for work in the fishing industry for one year.

Their struggle is the result of the government's tightened policies on management of migrant workers and human trafficking as part of efforts to tackle illegal, unreported and unregulated (IUU) fishing.

Thus, the government needs to come up with measures to help employers acquire workers.

The ministry prefers having migrant workers coming over through the MoU system because the measure ensures foreign workers are screened by a state-sponsored process.

Under the system, migrant workers are allowed to work for a period of two years, and are entitled to work for another two years if their contract is renewed. To seek employment after four years, the workers are required to return home for no less than 30 days.

Initiated in 2003, the MoU policy was part of the government's effort to streamline management of low-skilled migrant workers from neighbouring countries Laos, Cambodia and Myanmar.

But it was not put into practice until July 2009 when the first group of Myanmar workers arrived to fill vacancies in large enterprises. It got off to a rocky start with several shortcomings, notably high expenses charged by job brokers.

The MoU system has many benefits for businesses including a low turn-over rate which helps save costs of recruiting and training newcomers. The migrant workers, on the other hand, have fair work contracts and legal protection.

However, the MoU system has never been successful, reportedly due to pressure from business operators.

The commercial fishing industry in particular wants the government to allow registration of migrant workers all year round.

Instead of relying on a workforce obtained by MoU policy, commercial trawlers usually turn to large numbers of unregistered migrant workers.

The penchant of commercial trawlers to hire unregistered migrants had been blamed for illegal workers in the past.

According to a source in the Ministry of Labour who asked to remain anonymous, the number of registered workers seeking work permits dropped by 30% over the past few years.

As of last June, the latest number of registered labor migrants was 1.3 million, compared to 1.6 million a few years back.

The source revealed that the lower registered number is not all bad news. "Indeed, it is the first successful attempt to overhaul the management of migrant workers and streamline the database on migrant workers in every sector. And it explains the Labour Ministry's reluctance to yield to employers' demands," the same source said.

Deal in the making

At this stage, Myanmar has expressed an interest in sending 42,000 workers to fill essential jobs in the industry, according to Labour Minister Adul Sangsingkeo.

"I've sought cooperation from Myanmar in sending workers who are interested in working fishing vessels. Their officials have promised to supply 42,000 workers, and the first lot is expected to arrive in November or even earlier," Pol Gen Adul said.

A total of 53,649 foreign workers are needed to fill jobs. Most demand comes from the fishery sector.

The MoU agreement was reached during his August visit in Myanmar where he met Union Minister for Labour, Immigration and Population U Thein Swe to discuss labour issues.

The additional workers are expected to come largely from coastal areas including Myeik and Kawthong. To assist paperwork and permits, the Thai government will open a One Stop Service Centre for labourers in Ranong province where workers will undergo health examinations and deal with visa applications, work permit applications and registration.

According to Pol Gen Adul, the latest measures to help migrant workers reflects the government's efforts in encouraging the fishing industry to hire legal migrant workers, part of the process to make Thai fisheries sustainable and meet international standards on good labour practices.

He said hiring a legal workforce would help the industry with exports. At the same time migrant workers will be better protected because they will work under fair employment contracts without fears of being exploited, the minister said.

Pol Gen Adul, meanwhile, is reportedly scheduled to visit some of the One Stop Service centres currently up and running in 22 coastal provinces to process requests for additional hiring on Sept 21.

It is reported that Thai and Myanmar officials are negotiating over wages and welfare benefits and it is initially agreed that wages will be 12,000 baht per month for skilled workers and 10,000 baht for unskilled labour.

Workers will also be covered by a health insurance policy against accidents, and given compensation in case they cannot work.

Under the decree, employers are required to shoulder the costs of recruiting migrant workers.

Job recruitment agencies must be registered with the ministry and are required to make a five-million-baht deposit which can be seized to pay for damages they deliberately cause to the employers or the workers.

A total of 155 firms have registered with the DoE.

Mr Anurak said the department has also developed an IT system for processing job placement and worker recruitment requests, which should help reduce costs and shorten the process.

The fishing industry will be encouraged to use the IT system instead of the paper-based system, as it will better respond to their needs for replacement workers, he said.

Most employers are willing to shoulder related costs because they are aware it is increasingly hard to find vessel crews, she said.

"If employers or commercial trawlers think too hard and too long, they will end up losing these potential employees to others or even be in a position where they can't send their vessels off to the sea."

Despite so, some commercial trawlers still take advantage of their workers by deducting 1,000 baht a month from their crew and returning the sum when the workers complete their two-year service, apparently as an incentive to keep them there, Ms A said.

"The fishing operators have high risks. In some cases workers refuse to go to sea and there is nothing much the employers can do," she said.

According to Ms A, the turn-over in the fishing sector is high and it is common for the fishing crew to leave en masse if one of them is not happy with the employer.

A manpower shortage cuts into how much fish can be caught, and if the fleet can go to sea at all.

She said a fishing vessel cannot go to sea if there are not enough working crew on board after the regulations involving inspection of labour in the fisheries sector were strengthened to prevent exploitation and promote sustainable fisheries.

The crew list will be examined by Port In Port Out (PiPo) officials before departure and if the individuals do not match the paperwork, the vessel will stay docked.

PiPo officials will inspect crew numbers, work permits, and payrolls of migrant labourers to ensure labour laws have been observed.

A member of a family which operates a major commercial trawler, who preferred to be addressed as "Saluay", says the business has been running in Chon Buri for three generations.

However, she has seen half of her vessels grounded for about four months due to the labour shortage. Most of the fishing crews have left her to work on other vessels that "snatch" her crews.

She has lodged a request with the DoE seeking to hire 23 workers from Cambodia. Ms Saluay does not want to "snatch" workers from other boats or take risks by hiring illegal workers.

She offers a monthly payment of 15,000 baht per head, food and accommodation during non-fishing days in exchange for two years of service.

"I've asked the workers to make sure the potential crew understand what it is like to work as fishing crew and stay with us for two years. After that they can decide if they want to change jobs. It's important they understand this term," she said.

National Fisheries Association of Thailand chairman Mongkol Sukcharoenkana has welcomed the ministry's measures for hiring additional workers even though employers are required to absorb costs of 10,000 baht per head under the MoU.

These expenses are for necessary documents such as passports, visa, and work permits, medical examinations and travel but they are much lower than hiring through job placement firms.

"It's the price we can pay, and we hope these measures will encourage them to come over," he said.

In January, 2016, only 1,569 Vietnamese were registered with the Labour Ministry -- 723 headed to restaurants, 435 did house work and 411 worked at construction sites.

But "none of them" were fishermen, the ministry said.

Their numbers in fishing and related businesses are extremely low when compared with those from Myanmar and Cambodia who top the number of foreign labourers in this work field, labour officials said.

Backbreaking jobs in fishing boats is not always the primary choice for Vietnamese. Admired for their performance as "quality labour with high or semi-high work skills," Sarawut Phaithunphong, a scholar with the Thailand Development Research Institute, said Vietnamese labourers often seek work with higher salaries.

While working in fishing boats here can earn them between 10,000 and 15,000 baht a month, they can fetch at least 50,000 baht working for commercial trawlers in Japan, Korea and Taiwan, Mr Sarawut said.

Vietnamese migrant workers preferred to work in the service industry.

Thai employers prefer Vietnamese workers because of their ability to learn quickly, assigning them to take care of toddlers, elders and do domestic work, or work as wait and kitchen staff.

So far, employers have requested with the ministry that they want 3,200 Vietnamese workers via the MoU policy.

However, there are about 50,000 labourers believed to be working illegally, taking advantage of visa waivers granted by Thai authorities, according to the labour ministry.

Each year more than 500,000 Vietnamese tourists visit Thailand, and are allowed under tourist visas to stay in the country for 30 days.