Problems arise with far too many sources of easy finance, not too few

DESPAIR: A rice farmer in Ayutthaya’s Bang Sai district takes a break from her routine work in the fields. Like most other farmers, she is in a financial predicament due to farm debts. (Photo by Pattanapong Hirunard)

The farm sector has been a driving engine behind the country’s economic growth, but at the same time, debt among farmers keeps rising.

The main farm product is rice. Last year, the value of rice traded was 174.5 billion baht, which is around 12.89% of all farming product.

So, rice farmers should be wealthy as a consequence.

But the uncertainties in farming -- unmerciful weather, droughts and floods, fluctuating prices and rising costs -- enslave rice farmers to debts.

The government has offered help, but to no avail.

Farmer debt, most incurred by rice farmers, rose from 2.4 trillion baht in 2016 to 2.8 trillion baht as of last year, according to the National Statistical Office (NOS).

Among 3.8 million debtors with state-funded loans, 1.1 million of them are farmers, according to the NOS.

Last August, hundreds of rice farmers gathering in front of commercial banks and the Bank for Agriculture and Agricultural Cooperatives (BAAC) demanded help.

The government granted them debt relief, with an interest hair-cut.

But the bigger question is how to tackle farmers debt so it disappears for good.

Samree Treesawat, a 54 year-old farmer from Ayutthaya province, was among the farmers who joined the protest at the BAAC.

“I can see no future. The price of rice has gone down every year since the coup. I make no profit from rice plantations. I have been a farmer since I was young. I can’t change to a new job,” Mr Samree told the Bangkok Post.

Ten years ago, Seree borrowed one million baht from the BAAC to develop his home and launch a grocery business as a second job apart from growing rice. During the early years, he was able to make debt repayments, but stopped them over the past four years. 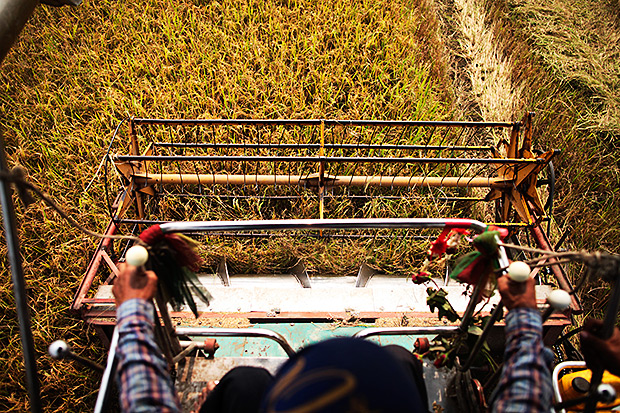 Mr Samree said he does not own his own land, so the costs are higher, and production costs in general have increased. Like many other rice farmers, Mr Samree rents land to plant rice.

The harvest gives him plenty of rice to sell. Yet he was still unable to make enough money to repay his debt.

First, Mr Samree needed to earmark 150 kilogrammes of paddy rice per rai to repay his landlord.

His landlord prefers rice to cash. They make easy money selling rice when the price in the world market jumps.

If not, they can still make money from the government subsidy -- under the rice mortgage scheme, or notorious rice-pledging scheme.

If droughts hit or the weather is otherwise cruel, Mr Samree could end up owing rent.

Even if he could not harvest enough to pay rent to his landlord, he still needs to pay production costs -- oil for tractors, chemical pesticides, chemical fertilisers and seeds.

Based on a study by the Thailand Development Research Institute (TDRI) in 2016, almost a quarter of all farm debts are owed to state banks.

Kamphol Pantakua, a researcher from the TDRI, said farmers have borrowed money from banks for further investment, which can return benefits of up to 77%.

That makes good sense economically, except farmers do not borrow for farming only.

Around 34% of them borrow for developing or buying a house or residential plot, 15% for education, 14% for improving the farming business, 14% for doing business, 10% on general consumption and 13% for other purposes.

The problem is not about lacking loans or financial help.

“Thai farmers are getting into more and more debt because they can draw on all kinds of financial sources. All governments have a raft of policies to help farmers get finance at low interest rates. But farming is a high risk career with variable returns,” he said.

He explained that rice is a commodity that is easy to sell, but not much of a money-maker.

The rice price fluctuates highly, based on the world market, not to mention fierce competition.

“Farmers could reap an 50% of profit
or suffer a loss just as big at any time,” he said.

The TDRI researcher also found policies to help farmers are a problem in themselves.

The government has provided subsidies to farmers, considered a significant source of votes.

Governments also provide other non-financial sources of support, including coupons for cheaper fuel, fertiliser and more.

They have also offered special loans with long-term payments and low interest rates to farmers. Interest rates for farmers from state banks are the lowest in Asean -- less than 2%.

Mr Kamphol said the government should reduce subsidies to the farming sector and cultivate self-sufficiency.

He said the government should play a new role as a “funding agency” to support farmers and raise capacity.

The government, he said, should pull in academics, local NGOS, and state officials to create a new strategy to solve farmer debt.

“But if the government still puts in large volumes of money to farmers with little efficiency, it will burden the country as money is drawn away from developing other fields,” he said.

BAAC’s president Apirom Sukprasert said non-performing loans at the BAAC are still at an “acceptable” level.

“Most farmers have skills in financial management. They can repay debt on time. But we still have some with problems, and we welcome them to discuss them with us,” Mr Apirom said.

About 1.5 million people who are debtors of the bank have registered as poor under the government’s scheme to help those with little money and the value of their debt is about 300,000 baht per person on average.

He said the bank has more flexible channels to help farmers improve their quality of life, compared with the past when loans were limited to agricultural purposes only.

“Now, our clients can get financial loans for education or real estate purchases, with different interest rates.”

However, the important thing, he added, is the bank will work with agencies to create “immunity” for those farmers.

Farmers are shown how to cultivate financial discipline and increase personal savings.

The bank has also offered measures to attract more savings from farmers.

Most popular among clients is lucky draw competitions, with winners drawn from those with deposit accounts.

Mr Apirom said the BAAC is approving soft loans to 452 cooperative farmers nationwide, which will be allocated to support farmers to help cut production costs and increase income.

This is done under the government’s agricultural reform policy.

The private sector, for its part, will help farmers distribute their products to customers.

“We can no longer be focused on debt suspension or loans alone. We must focus on making farmers more disciplined and more financially independent, as that is the way to become debt free.”