The Immigration Bureau chief contiues to crack down on suspects who live in Thailand illegally.(Photo by Apichit Jinakul)

Immigration Bureau chief Surachate Hakparn admits frequent crackdowns on suspects who live in Thailand illegally have made other foreigners feel uncomfortable, but the bureau's success in carrying out the campaign outweighs this concern.

"Today the number of foreigners who overstay their visas is zero," Pol Lt Gen Surachate said, referring to the outcome of strict measures against the wrongdoers.

"I want to keep the number at zero."

Pol Lt Gen Surachate is aware that attempts to separate good and bad foreigners may have some unpleasant impacts, especially on those who live and work in Thailand legally.

However, Pol Lt Gen Surachate insisted authorities need to "expel bad guys and have only good ones stay." The so-called "X-ray campaign", in which police inspect a wide range of venues from small rented houses and factories to luxury hotels, looking for errant foreigners, has helped the government reach its goal.

An expat in Thailand, who asked not to be named, said: "The immigration police pick on all the black people. No problem if you're white. They'll leave you alone. They just think all black people are bad."

The immigration bureau chief, however, claimed that a lot of visitors from certain African countries overstay and also commit crimes in Thailand.

Another foreigner, who also asked not to be named, said his friends seeking asylum were also affected by the operations. Some have been detained.

Since the campaign started in July last year, officers have conducted 39 operations in 3,755 target areas across the country as of the end of November.

Several thousand suspected wrongdoers, mostly overstaying their visas, were arrested and sent back to their countries. Information on asylum seekers was not revealed.

In October alone this year, police arrested more than 40,000 suspects. Many of them were blacklisted and prohibited from re-entering Thailand.

Pol Lt Gen Surachate attributed the success largely to complaints from owners of accommodation as well as crackdowns on brokers who help foreigners renew their visas illegally. 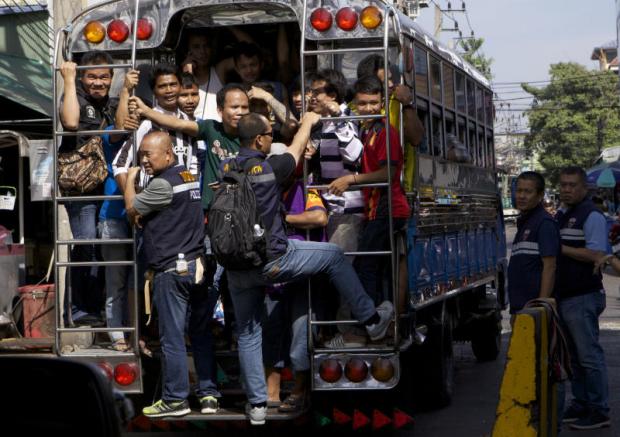 yet more checks: Authorities bring migrant workers they found for further investigation where they were asked to prove their identity and legal working documents. (Photo by Apichit Jinakul)

One condominium has so many foreigners that "every floor was full of foreigners," Pol Lt Gen Surachate said.

An inspection at the property found many of the guests were living illegally while others failed to inform the Immigration Bureau of their addresses, which violates Section 38 of the Immigration Act.

By law, foreigners are required to report to authorities within 24 hours after they check in to their accommodation.

Usually, hotels will do the job for them, but in case they have to report to authorities themselves, they must contact the Immigration Bureau or police who oversee areas where they stay.

It is an important law but may be easily ignored even by those who have never intended to commit any wrongdoing, Pol Lt Gen Surachate said, adding many bosses and their staff have no knowledge of this legal requirement.

A raid on a leading construction company put the spotlight on the problem. The migrant workers there possessed work permits, but they failed to report their addresses to police.

Foreigners who work in Thailand need to be careful not to overstay their visas.

Usually, authorities will issue a warning letter, asking them to renew their visas which allow for a 90-day stay. If they fail to show up, they will be considered as overstaying their visas and will be subject to arrest, he said. 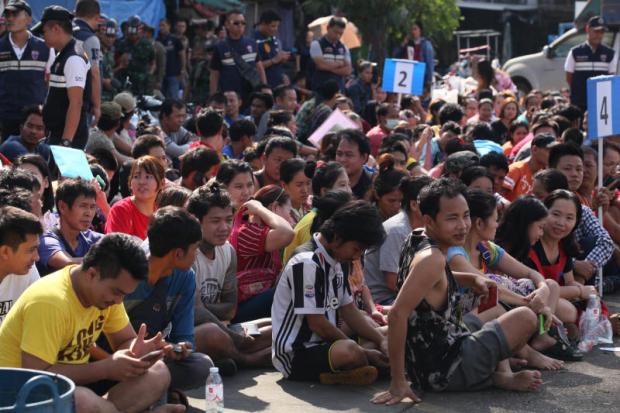 keeping it clean: The See Moom Muang wholesale market is among nine spots in Lam Luk Ka district of Pathum Thani where hundreds of migrant workers live and work. The market and nearby accommodation were raided in November. The authorities' operations were meant to suppress the use and sale of illegal firearms and illicit drugs. (Photo by Apichit Jinakul)

The visa issue is also a problem when foreigners are lured into renewing their visas via brokers. Checks by police found their services involve many irregularities, involving forging documents that certify applicants' financial status and false claims of their money records.

A law stipulates that foreigners who want to prolong their stay in Thailand need to have at least 800,000 baht in their bank accounts.

This is exploited by brokers who resort to trickery to make officers believe that the visa renewal applicants have enough money to pay for their living expenses.

They transfer money to their clients' bank accounts in the morning to have the balance checked by officers and quickly withdraw it in the evening once the financial "proof" has been provided, Pol Lt Gen Surachate said.

It is not such a serious matter if their clients are decent people, but some might be criminals, he said. He recommended foreigners who need help to contact his agency directly.

If they want a more technological channel, they can contact police through the Line App, which has the handle "immigration".

The software allows foreigners to give their addresses and apply for visa renewals online without a need to travel to the Immigration Bureau.

With all these facilities available, if foreigners still rely on illegal means and opt to stay in the country secretly, "we'll treat them as ill-intentioned people and they'll face arrest," Pol Lt Gen Surachate said.

The X-Ray Outlaw Foreigner campaign will stay in place, and even foreigners with refugee status will be carefully regulated, he added.

Police will keep a close watch on their number and the period they are allowed to stay here by working more closely with the United Nations High Commissioner for Refugees, he said.