One of the first things you notice about hornbills, apart from their sickle-shaped bills and quiff-like casques, is they have funny names -- rhinoceros, helmeted, wreathed, wrinkled and trumpeter, to name just a few -- but the threat of their extinction is no laughing matter. 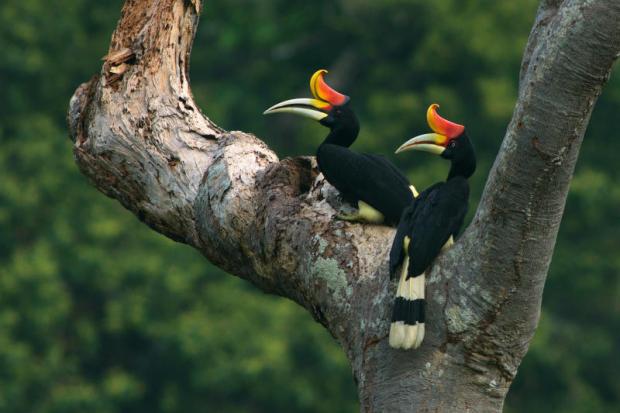 Most hornbill species in Thailand are endangered or 'vulnerable'. Smith Sutibut

Certainly not for Preeda Thiensongrassamee, 47, a leading member of the Thailand Hornbill Project (THP) under the Hornbill Research Foundation (HRF).

Now mostly endangered in Thailand, hornbills reflect the richness of forest ecosystems -- nine species have been recorded in Surat Thani's Khao Sok National Park alone -- while highlighting the threat industrialisation poses to the environment and its flora and fauna.

"Our forests are shrinking and wild animals are struggling to survive in their natural habitats, especially great hornbills," said Mr Preeda.

"These birds symbolise the abundance of life in Thai forests, and how this has come under threat. Everyone should consider it their duty to protect the environment."

Thanks the THP's research team, the conservation campaign has gained leverage as the team has managed to turn residents who hunted great hornbills and other species of the same family into helpers in the project to protect the endangered birds.

Hornbills can be found from south of the Sahara to the Solomon Islands. They feed mostly on fruit, berries, insects, small mammals, other birds' eggs and reptiles; live in tree cavities; gain moisture from food; and have eyelashes to protect their eyes from dust and debris.

They also have necks so muscular it would put the Incredible Hulk to shame, offer food as an engagement gift, help build "prisons" for their mates to nest in, have their own Morse code -- experts say the noise of the male beating his wings against the nest sounds like a steam engine -- and have built-in crampons (they use their bills to help them climb).

Around 13 of the world's 57 species of hornbill, recognised by their super-sized yellow, black or orange bills, still live in Thailand. The lucky ones are classified as "vulnerable", mostly as a result of deforestation, the poaching of chicks for food and the illegal wildlife trade. 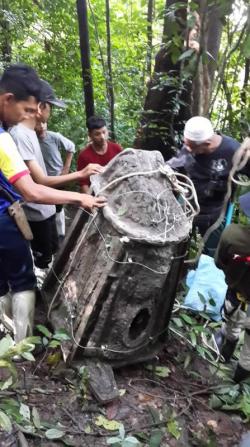 Volunteer conservationists track the bird's habits to help preserve them and their habitats.

To give them a fighting chance, the foundation has supported the THP for over 20 years in compiling information about their breeding biology, nesting behaviour and other aspects of their lives.

Years ago, the HRF began experimenting with its Hornbill Family Adoption Programme to incentivise villagers not to raid their nests, and to collect data instead of stealing the chicks.

Mr Preeda sees his mission as safeguarding their pristine and untouched habitats. He works with the Budo Hornbill Conservation & Education Centre to patrol a stretch of land that runs over 600 kilometres from Prachuap Khiri Khan to the southernmost province of Yala.

Yala borders Narathiwat, which has a national park called Budo-Sungai Padi National Park and a towering mountain range in its Sungai Padi district. Mr Preeda recalls researching hornbills there in 1998 when things hit a snag when locals, who rely on their chicks for income, resisted change.

Less merciful poachers hack down trees to clear paths to find the birds -- who like to move into hollowed out trees after the woodpeckers have left -- and steal their chicks.

Mr Preeda said the most pressing task is to educate residents about the fragile state of ecological systems and the food chain, of which hornbills are an indispensable part.

The team had to convince residents, who used to poach the hornbills in the forests, that they stood to gain from the success of these hornbill conservation efforts. At first only 10 locals agreed to help out on a regular basis, officials recall. That number has since more than tripled to 35.

Master's degree students, interns and volunteers have further buttressed the team, while residents who participate in the research receive a modest stipend by the foundation.

Mr Preeda said locals are tasked with gathering information about the location of hornbill nests, mostly found in Takhien trees. Their job is also to scale up trees and make a detailed record of the conditions of the nests, which can reveal much about the birds' health.

The highest price, up to 3,000 baht, is offered to those who attempt to summit the most challenging of trees, which usually happens when seeking the white-crowned hornbill, Mr Preeda said.

After that, the foundation trains them to build stealthy observation platform hidden in the canopy so they can observe the birds' behaviour. One team member is assigned to observe up to three nests for 150-200 baht a day.

On their raised platform, these "observers" jot down essential details such as when the hornbills return from their seasonal migration, how many eggs they lay and what they eat.

The team also reports on tree holes the birds have ignored, and offer reasons why, as well as repairing any damaged nests, sometimes using camouflaged fibreglass.

Mr Preeda said many mature hornbills fly back to forest complexes in the west of the country to mate and raise their young. They are considered good husbands and loyal partners -- monogamous and always returning to their nests to care for their family, he noted.

As a result of the foundation's efforts, the tide is now turning and their natural habitats are seeing less destruction, he said.

A newly sponsored youth camp should support this trend as students from Prathom Suksa 4 (Grade 4) to Mathayom 1 (Grade 7) learn about on-site data collection and which trees provide the seeds and fruits the birds like to feast on so that more can be planted.

The foundation raises money through the Hornbill Family Adoption project, which solicits donations to help offset the costs of protecting specific pairs of hornbills.

Mr Preeda also has a penchant for drawing. Many of his sketches have been auctioned off, with the proceeds helping to cover the expenses the foundation racks up in conserving local hornbill populations.

The birds even get their own red-letter day, on the eve of Valentine's Day. For the last 15 years, Feb 13 has seen the foundation team up with Mahidol University to organise Love Hornbills Day, raise awareness of their plight and drum up funds to save them.

"We're beginning to see a silver lining. More of the people around here now know and value hornbills," Mr Preeda said. "After all these years of slogging it out, things are finally starting to pay off."

The success of the foundation and project now serves as a research model for other countries including Malaysia, Indonesia and Myanmar.

For his pains, Mr Preeda was awarded the first-ever Khon Khon Khon Award in the "unsung hero" category for his dedication to preserving their habitats.

He joined the foundation after graduating in 1992 with a diploma in graphic arts. At first his workload revolved around designing pamphlets and souvenirs, before he was shifted to a forest survey team. He later picked up a degree in communication arts.

In 1994 he was included in a research project on woodpeckers' role in creating nest cavities for hornbills at Huay Kha Kaeng wildlife sanctuary. He hasn't looked back.

"Caring for the environment pays huge dividends," he said. 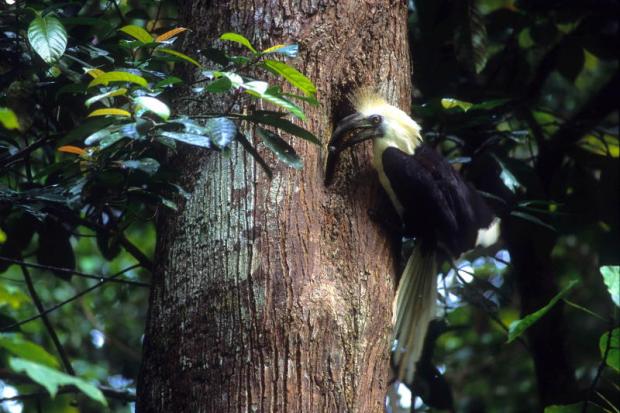 A great hornbill builds a nest in the cavity of a tree deep in the forest. Where no cavities are available for nesting, researchers build an artificial nest made of fibreglass for the birds. For years, Preeda Thiensongrassamee, below, has been at the forefront of efforts to conserve Thailand's hornbills. 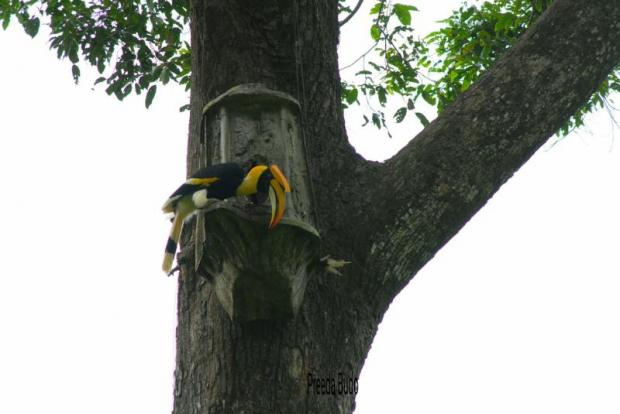 Their colourful and bizarre-looking bills make them a big draw. 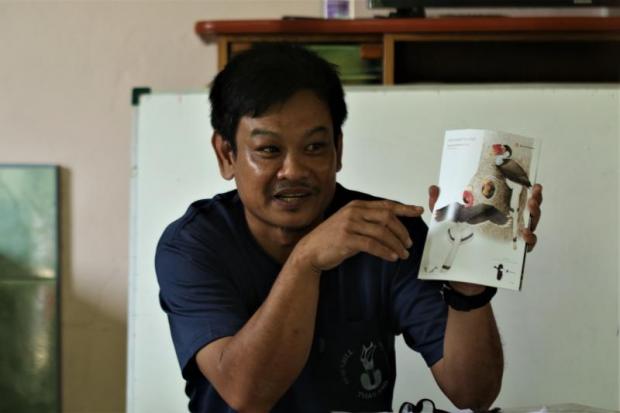 Preeda Thiensongrusamee wants to turn villagers from poachers into saviours.

Decorative lights for the Queen Mother

A total of 21 billion baht worth of government savings bonds will go on sale to the public from Aug 22 to 24, a Ministry of Finance official confirmed on Thursday.

Thailand and Malaysia have agreed to expedite the construction of land transport links at their border, to foster trade between the two countries.

“Obsession” is the definition of OLD POSH, a new standard in gentlemen’s shoes