The Moken fight for more space

The government must listen to the real needs of indigenous people, write Post reporters

Still smoking on the morning after, the Moken village lost 61 homes, and left 273 members of the 70 households with nothing. (File photo)

The Moken, "sea-gypsies" who live along the coast and islands in the Andaman Sea have always drawn people's interest and compassion. This may explain the scale of assistance and donations given to a village of Moken sea-gypsies that was razed by a fire on Feb 3.

On that fateful day, three-quarters of 81 thatched-roofed houses on Moo Koh Surin in Phangnga burned down to the ground.

While aid has been flowing in, concerns have been raised that the "top-down" assistance given by the state may not reflect the actual needs of the Moken community.

On Feb 11, a network of Andaman sea-gypsies led by Witthawat Thepsong, petitioned the permanent secretary of the Ministry of Natural Resources and the Environment Wijarn Simachaya, to halt the reconstruction of new homes for affected victims.

Mr Wijarn is the chairman of the committee responsible for the living arrangements for the sea-gypsies, as well as the Karen hill-tribe communities.

The Moken have inhabited Moo Koh Surin for more than 150 years. As time passes, new maritime boundaries were drawn up and new rules were put into place -- regulations that limit the Moken's opportunity to make a living from the sea, as they had done for many generations. 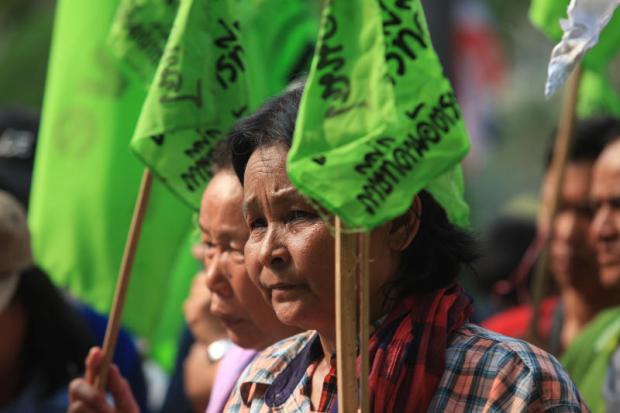 P-Move, a grassroots group which campaigns for land rights for the poor, rallies outside Government House last week. The group urged the government to halt its move to build a new housing project for Moken sea gypsies on the Surin islands in Phangnga as its design plan does not accommodate a large family. (Photo by Somchai Poomlard)

The fire destroyed a total of 61 houses and left 273 people from 70 households with nothing. Their fishing equipment, along with their clothes and whatever money they had managed to save, are now gone.

Mr Witthawat said construction of the new houses fails to take into account the needs of the Moken people. With only 3 by 6.5 metres of space allotted for each home, he said the houses are "too small".

In the past, houses were larger because it was not unusual for two, or even three, families to live together under one roof.

The network said that the issue should be discussed further with Mr Wijarn's committee, which was set up by a cabinet resolution in 2010.

Under the June 2 resolution, indigenous communities -- including the sea-gypsies -- were given the right to take part in decision-making process for their respective groups.

"A subcommittee of sea-gypsies must be established to provide input for the construction of the new houses," Mr Witthawat said.

The plight of the Moken has been heard by several academics, who are urging the government to use a more inclusive approach. One of them, is Narumon Arunotai, an anthropologist for Chulalongkorn University's Social Research Institute.

Ms Narumon, a respected expert on Thailand's indigenous communities, said she was "shocked" by the pile of donated clothes she saw during her visit to Moo Koh Surin on Feb 9.

"While the clothes can still be worn, most of the items will remain untouched because Moken women prefer to wear sarongs," she said. "I'm worried the huge pile of donations will just be discarded as rubbish."

Ms Narumon said state officials and aid organisations must not only focus on completing their charity drive and listen to the needs of the community, and that the Moken must have a say in the reconstruction effort.

"They must be given the time to come up with a plan for their future," she said, adding reconstruction on Moo Koh Surin could serve as a model for active cooperation between indigenous communities and the state.

Ms Narunom said the Department of National Parks, Wildlife and Plant Conservation -- as the de facto "landlord" on the islands -- should provide more space for the Moken sea-gypsies.

While the Moken rely heavily on the Andaman Sea for sustenance, their traditional method of fishing has minimum impact on the environment, she said.

"The community is proposing the expansion of their permitted range, which will ease overcrowding on the island and consequently prevent fires from spreading so quickly in the future," Ms Narumon said.

The lives of the seafaring Moken people have been a subject of interest among anthropologists. After the fire, Princess Maha Chakri Sirindhorn's Anthropology Centre launched a study into how the incident will change the Moken people's way of life.

"They are very resilient," he said. "In the past two decades, they have had to deal with land development along the Andaman coast, as well as the 2004 Indian Ocean tsunami, and then the fire."

Mr Peerapon said the community experienced significant changes after the tsunami, and he fears the blaze will adversely impact the beleaguered community.

"In the past, Moken houses were built out of natural materials, right next to one another, which made it easy for fires to spread," he said.

"The state should take this into account while reconstructing the homes."

In addition to the support from the academic circle, People's Movement for a Just Society (P-Move) -- a grassroots group campaigning for land rights for the rural poor -- has also put the Moken people's housing plight in its list of demands for the government.

P-Move leader Jamnong Jitnirat said the government agrees with the group's proposal to halt the plan to build houses for the Moken.

"We are now pushing the government to enlarge the size of the houses to meet the Moken's demands," he said.