The GPO leads the way in developing medical grade marijuana

In the factory grounds of the Government Pharmaceutical Organisation (GPO) in Pathum Thani's Thanyaburi district, stands an ordinary two-storey building. Small, old and fairly nondescript, it is nevertheless guarded around the clock and equipped with a security system. This is because its upper floor is a restricted zone where the first lot of 140 cannabis plants will be grown for R&D and medical purposes.

"Today is a historic day when the GPO begins to grow cannabis. This facility is the first legal marijuana plant in Thailand," Public Health Minister Piyasakol Sakolsatayadorn announced at the opening of the country's first legal pot farm last week.

Thailand is celebrating a public health milestone. The 1979 edition of the Narcotics Act, which categorised cannabis as an illegal drug and prohibited it from being used in hospital treatments, has been amended. The 2019 Narcotics Act, which was published in the Royal Gazette last month, puts an end to 40 years of restrictions on cannabis use. Now medical marijuana can be used by doctors and researchers for medical purposes.

Following the change to the law, the GPO allocated 10 million baht in the first phase for the renovation of the entire 100m² space of the building's second floor for the project. The plants are grown from seeds, with the seedlings being cultivated using an aeroponic system, according to GPO executive managing director Dr Withoon Danwiboon.

Aeroponics is a growing technique that does not require soil or water. Each seedling is placed in the middle of a platform on top of a black pot, leaving the roots to dangle in the air. Each pot is connected to a system that continuously sprays nutrients directly to the roots. There is also a drainage system to take away excess moisture, which collects on the planter bed, in order to avoid mould. The cannabis plants will grow as long as the roots receive the right nutrients and enough light. In the closed room, LED lights are used. The light spectrum can be adjusted for each growing stage. The room also has a ventilation system and computer systems to control moisture and temperature. There is backup electricity to make sure the plants are monitored and have food 24 hours a day.

"This site is the pilot project for planting cannabis indoors, under a securely controlled environment," said Dr Withoon. This growing technique will result in a high yield and eliminate the possibility of hazardous contamination.

Last year, the GPO tried to produce cannabis oil extracts from seized marijuana from the Narcotics Control Board. It expected to produce 18,000 bottles of cannabis oil for medical research. But a problem arose when its research team found high levels of toxic contamination, including lead, cadmium, pesticides and mould in the confiscated samples.

"Our goal is to produce medical grade cannabis, so the plants must be free of hazardous contents and safe to use," Dr Withoon said.

The GPO developed plans to build the small-scale plant as a pilot scheme after the cabinet approved the amendment to the Narcotics Act 1979 last April. Last month's royal endorsement finally gave the GPO the green light to proceed.

Under the amendment, a special panel comprising officials from state health agencies and medical and pharmaceutical experts has been set up to monitor cannabis use. Any party who wants to grow cannabis must get approval from the Public Health Minister before obtaining a license from the Food and Drug Administration (FDA) for cultivation.

The Public Health Ministry will soon issue three ministerial ordinances, including the production and distribution of cannabis, and will also give exemptions to doctors to prescribe medical cannabis. In order to qualify for a license, applicants must be state organisations whose responsibilities include medical, agricultural and scientific research, or universities with faculties of medicine or pharmacy. Also eligible are community enterprises and agricultural co-operatives, but they must work with state agencies or universities that have approval.

"The law will help Thai nationals to cultivate cannabis. For at least the next five years, we must speed up the process," said Piyasakol, adding that those who want to farm cannabis should follow the GPO in producing pharma-grade cannabis.

Although the law allows cannabis to be used for R&D and medical purposes, it is still illegal to use it for recreation. At present, people who grow, own or process cannabis must report to the FDA to seek an amnesty within 90 days or until May 19.

The strain in Spain

The cannabis seedlings in the GPO's plantation are not local varieties. The GPO imports the seeds from Spain.

"It doesn't mean that local breeds are not good, but the cannabis seeds from Spain are already graded and have passed the process of improving plant cultivars. The seeds have the quality that we need," said Vichien Keeratinijakal, a herb expert for the GPO project. Only female flowers are used for oil extract.

The quality refers to the amount of two main compounds, tetrahydrocannabinol (THC) and cannabidiol (CBD). The two chemical compounds, out of 400 components found in cannabis, are popularly used in modern medicines. THC can ease pain and nausea, reduce inflammation and act as an antioxidant. It can also make people high. CBD can reduce anxiety, spasticity, pain and sleeplessness. It can also counteract the high caused by THC.

"It is important to research the three varieties because the oil extracts will be used for different sicknesses," said FDA Secretary-General Tharet Karatnaiyarawiwong.

The Department of Medical Service will conduct clinical research while a committee will be set up to select patients for clinical treatment. They will be those who are diagnosed with epilepsy and chronic illnesses like Alzheimer's, Parkinson's, multiple sclerosis (MS) and late-stage cancer, as well as cancer patients who have nausea and vomiting after chemotherapy.

Within the next four months, the GPO expects to produce 25kg of dried sensimilla or seedless cannabis flowers. In July, it plans to produce 2,500 bottles of cannabis oil extract, with about 5cc-10cc per bottle. Within the first 12 months, there will be 100kg of raw materials. The produce will help reduce the cost of imported cannabis.

"The cost of dry cannabis flowers starts at 150,000 baht per kilo. If the GPO can produce 100kg a year, it can break even within the first year," said Vichien.

Local herbalist Banthoon Niyamabha, better known as Lung Tu, treats cancer patients using oil extracted from cannabis. He claims to have been using local weed on his patients for decades.

"I am more than happy that what I have done for decades is now legal. My medicine works well on cancer patients," he said. He believes that, while it is good that the GPO is producing medical grade cannabis, typical cannabis can be used for medicine too. 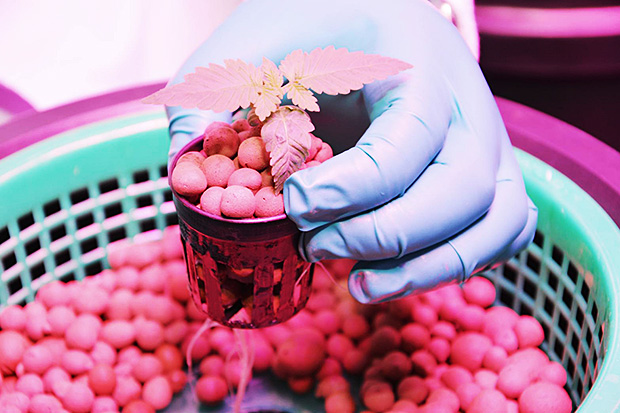 The plants are grown under LED lights.

Next year, the GPO will invest 164 million baht on its second phase. It will renovate a rooftop of another building for a second plantation. This will be 10 times larger than the present facility at 1,000m². The second farm is expected to produce up to 700kg a year.

Soon the GPO will employ another growing technique, known as plant tissue culture, to ensure future plants have the same genetics as the original plants, according to Dr Withoon.

"It is like cloning the plants to have exact copies of the originals. We want every lot that we produce to have the same levels of THC and CBD," he said.

In 2021, the GPO plans to launch its third phase with a billion baht investment in its herbal complex in Nong Yai district, Chon Buri.

"Thailand can now grow cannabis for research and medical purposes. In the future, the plants which have high demand and economic value will be ready for export. All we need to do is to make sure that we can produce medical-grade cannabis," he said.