Suicide a growing global problem and Thailand is no different

Several high-profile incidents of suicide among school and university students over the past two weeks have focused the nation's attention on a problem that has been worsening, under the radar, for quite some time.

In a span of 12 days, there were at least five cases of youths taking their own lives. Two had bouts of depression recorded on their medical records and all left a message of love and apology to their parents which mentioned extreme exhaustion and a lack of strength to carry on.

The latest case happened on Wednesday when a third-year student jumped to her death from the 8th floor of a Kasetsart University building, leaving a note about the pressure of studying.

Two days earlier, a first-year student at Khon Kaen University with a record of treatment for depression jumped off a building and fell to her death at the university.

Prior to that, two female students from Chulalongkorn University and Silpakorn University, in two different events, also died after jumping off their campus buildings.

On Feb 23, a high school student, who was taking the General Aptitude Test (GAT) and Professional and Academic Aptitude Test (PAT), killed himself by jumping off a building as well.

In January, the case of Maha Sarakham technical college freshman jumping from a campus building was also reported.

Meanwhile, two people were last week reached by authorities before they could cause any harm to themselves after they posted messages on their Facebook accounts saying they were suicidal.

One of them later thanked those who alerted the authorities, saying she was finally getting the help that she needed for depression after being taken to hospital. 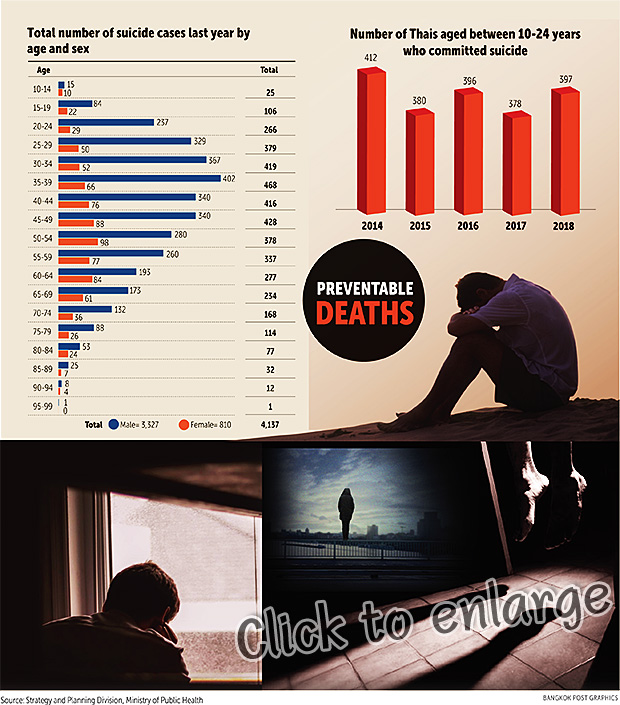 This alarming trend has prompted the education ministry, parents, school administrators, teachers and other education stakeholders to attempt to develop a strategy to combat a complicated issue with no easy answers.

Education Minister Teerakiat Jareonsettasin, who has a background as a child psychiatrist, recently urged educational institutions nationwide to provide services such as counselling centres and suicide hotlines to students who might be depressed or considering taking their own lives.

"Depression is a mental illness that makes a person feel sad, unable to enjoy anything and, in severe cases, can drive them to think about suicide. However, with the right treatment, someone with depression can recover and live a satisfying life again. The point is that schools and universities have to make sure that support from mental health experts they can trust and can talk to openly is available to students," the former psychiatrist said.

Mr Teerakiat said suicide rarely occurs without warning signs, so it's important for parents and teachers, or anyone who spends time with children and teens, to be educated about the signs of depression and suicidal ideation as intervention at the right time can save lives.

The scale of the problem

According to the Public Health Ministry, around 4,000 Thais commit suicide every year, with family and relationship problems cited by those who left messages to their families as the main reasons.

According to Yongyuth Wongpiromsan, a former Public Health Ministry spokesman and psychiatrist and current chief adviser to the Mental Health Department, the most common suicide methods are hanging, poisoning and shooting.

Factors leading to suicide were health issues such as depression, chronic illness (especially in elders worried about becoming a burden to their families), family problems such as domestic violence and a loss of self-control experienced after bouts of excessive drinking, he said. 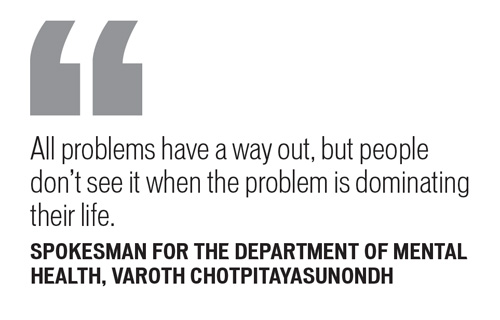 "In Thailand, most suicide cases involve working-age people -- late 20s to 50s -- who suffer from relationship or family issues, or are overwhelmed by debt or stress from work," said Dr Youngyuth.

Another study conducted by Khon Kaen Rajanagarindra Psychiatric Hospital found that the number of male suicides is four times higher than those committed by females.

The study also found there is usually at least one or two incidents every month of Thais broadcasting their own suicide online. It said the trend is dangerous as there is no means of censoring the content. Anyone can watch a Facebook live feed, including children without adult supervision. The graphic content that sometimes ensues can affect the mental health of those who watch it, the study found.

The study also found that those who commit suicide, or attempt to, usually show signs beforehand by writing farewell letters or texts, or posting depressing content on social media. Loved ones are encouraged to reach out when they notice any signs like this.

The department also said that last year there were 397 suicides among adolescents or 3.03 per 100,000. Of the cases, 81.1% involved hanging, followed by 6.8% who consumed poisonous chemicals. There were three cases of jumping from buildings last year. Meanwhile, inhaling toxic fumes accounted for around four cases.

Nevertheless, the number of suicides in Thailand is regarded as "medium" by The World Health Organization (WHO), with 6.34 per 100,000 people per year, compared with a global average of 12 per 100,000.

The WHO found that the number of suicide cases has increased by 60% globally over the past 50 years.

One million people killed themselves around the world last year, while the number of attempted suicides was 20 million.

Varoth Chotpitayasunondh, spokesman for the Department of Mental Health, said the department is working hard to arrest this alarming global trend which most experts expect will only get worse.

The impact of social media

Dr Varoth said that although the causes of suicide are many and varied, relationship problems are often cited. Social media also appears to play a significant role in the ideation process, where a person first considers the act of suicide before actually taking concrete steps to end their own life.

"I have found that people right now are very sensitive to negative interactions in relationships. That might be because of the influence of the online world. Suicide or self-destructive tendencies can reach a tipping point after something as seemingly trivial as a partner not replying to a Line message. They have less patience.

Also, the comparative nature of social networks means people often compare their lives to those of their peers, leading to a loss of self-esteem if they don't feel like they match up. And, sadly, many also suffer from bullying which is all the more pernicious when mobile phones and social media leave them with the feeling that there are no longer any safe spaces to shelter from the storm," he said.

The department's chief Kiattibhoom Vongrachit warned the media should not go into detail about the method used in suicide cases, so as not to provide those in distress with anything that might resemble instructions in how to carry out the act.

He said relationships are a prime cause for suicide attempts, while 19.6% of cases involve the use of alcohol and drugs, and 7.45% concern mental health problems.

"We need to stay alert to the signals that show someone may be about the take their own life. These often involve dispirited messages on social media, but can also involve odd behaviour around friends and family, especially unusually emotional behaviour. More than 12% of those who attempt to commit suicide do not live to tell the tale," he warned.

Dr Varoth suggested that if anyone suspects a friend or relative may be struggling emotionally to call the department's 1323 hotline for advice.

"All problems have a way out, but people don't see it when the problem is dominating their life. Those around us are vitally important in terms of providing support during difficult times," he added.

In an effort to limit the number of suicide cases, especially among adolescents, the department will work with the Ministry of Education to increase its capacity to identify those students who most need counselling and support.

Meanwhile, Panomporn Phoomchan, director of Samaritans Thailand, a non-profit organisation working to prevent suicide and support those who have lost someone to suicide, said the organisation provides a phone-in counselling service for anyone in dire straights who might be considering ending their own life. She said that sometimes just having someone to talk through problems with can be enough to put someone on the path to recovery.

Samaritans Thailand has over 50 volunteers who are willing to listen and give suggestions. Volunteers are trained to make an initial assessment of whether an individual poses a risk to themselves or others before advocating mental health resources that provide a path to that person resolving the issues that have led them to phone in, said Ms Panomporn.

On the technology front, apps are also available to give people help online, though they are also encouraged to seek medical advice if necessary (see sidebar).