Wasting away to make energy
Tech

Wasting away to make energy

The government is keen to reduce landfills, using refuse for power generation, with new licensing expected later this month.

Staff sort out a variety of solid rubbish at a power plant in Rayong. (Photo by Pattarapong Chatpattarasill)

Many private companies in the Thai renewable energy field are pleased with the new version of the national power development plan (PDP) for 2018-37.

The PDP calls for gradually opening up investor participation in waste-to-energy power projects, setting a goal of 500 megawatts from such fuel, representing 30% of total renewable resources by 2037.

Part of the impetus for this type of energy generation is that waste management has been put on the national agenda to help eliminate waste pollution in the country.

More than 50% of waste heads to landfills and has done so for more than four decades.

There were several complicated conditions and regulations that were a barrier to developing a waste-to-energy sector in Thailand during 2012-15, according to the Energy Regulatory Commission.

The ERC has since amended several laws and conditions to create more potential for waste-to-energy business. 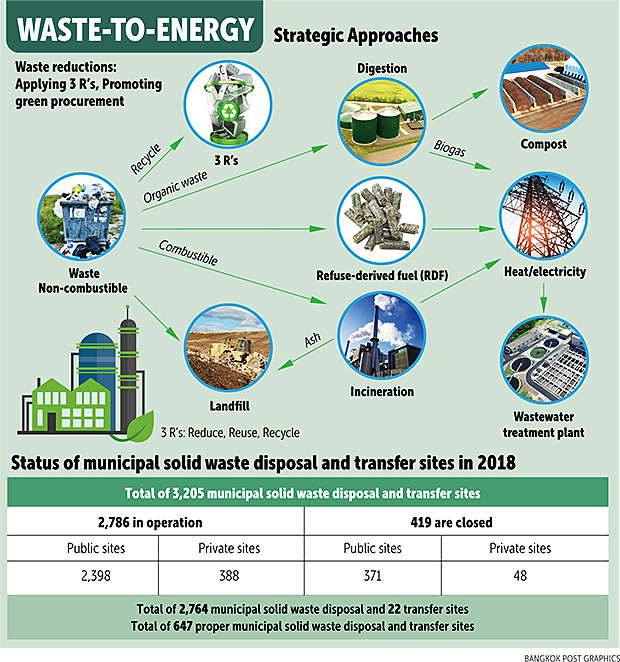 Naruphat Amornkosit, secretary-general of the ERC, said an announcement of licensing for waste-to-energy projects is likely this month, with a tentative feed-in tariff of 3.66 baht per kilowatt-hour (unit).

This licensing round excludes 12 refuse-derived fuel (RDF) projects under the Quick Win initiative with a combined capacity of 78MW.

She said power purchase agreements will be for a period of 20-25 years and the state grid has plans to buy power from this renewable resource.

The locations and landfills will be in high-density areas such as Bangkok, its surrounding provinces and other metropolitan areas.

Ms Naruphat said licence holders have to comply with a single rule: quick development during a stipulated time frame to avoid any delays and postponement.

Montree Wiboonrath, president of the Institute of Industrial Energy, said the institute submitted proposals to the ERC to place RDF resources in the biomass power category, which offers a higher feed-in tariff of 4.24 baht per unit.

"Biomass power generation is made from agricultural waste, and the price of raw material fluctuates greatly compared with abundant solid waste in landfills," Mr Montree said.

For example, the price of wood chips and rice paddy has tripled from 500 baht per tonne to 1,400 baht in the past five years, he said.

At present, RDF power projects receive a feed-in-tariff of 2.65 baht per unit.

"The lower tariff means many investors will have a low return on investment," Mr Montree said. Some 550MW of waste-to-energy power projects have applied for licences, with RDF resources a part of this renewable energy, he said.

The capacity represents the first phase of the waste-to-energy business, but only 22 projects have been developed and are operational, offering a combined capacity of 213MW.

The remaining capacity of 337MW has not been developed because the rules and regulations are too complicated for the ERC to approve the licences for investors, Mr Montree said.

"Energy policymakers should facilitate investment in RDF projects because the amount of waste in Thailand grows quickly every year," he said.

These plants will sort out raw materials for RDF-made power generation.

Kanapod Nitsiri, chief executive of Eastern Energy Plus Co, said EEP's business expansion is being stymied because of uncertain rules and regulations.

"We are pushing for the feed-in tariff of 3.66 baht per unit because costs for preparation and development always increase," he said.

EEP is the operator of RDF power projects in Phraek Sa subdistrict in Samut Prakan province.

"During a public hearing on participation in the RDF power project, we have suffered from unexpected costs because local communities are protesting the project because of the stench and wastewater," Mr Kanapod said.

EEP is the first investor in local RDF power projects and has seen it take several years to develop and operate its plants. The company wants to invest in three more RDF projects at the same landfill.

TPIPP is Thailand's largest capacity operator of an RDF project, which is located in Saraburi province.

Mr Worawit said Thailand has great potential to develop RDF projects, with capacity of up to 1,800MW.

"Of course, policymakers should facilitate development with more flexible conditions and rules," he said.

With its experience in RDF projects, the new quota for waste-to-energy capacity is a big opportunity for the company, Mr Worawit said.

TPIPP plans to submit proposals for the RDF auction to the Bangkok Metropolitan Administration (BMA) for the Nong Khaem and On Nut landfills this month.

The BMA plans to open the auction round for 40MW in total, with an estimated investment cost of 12 billion baht.

TPIPP has issued debentures worth 4 billion baht since last November for refinance and to provide funds for its business expansion, including new RDF projects.

The company also wants to participate in the auction for independent power producers in the coming years.

Cherdsak Wattanavijitkul, managing director of TPC Power Holding Plc (TPCH), said the company is ready to participate in the auction for RDF projects because of its financial capabilities and business partnerships.

"TPCH has lengthy experience in biomass projects, which generate power from agricultural waste, so it can be assumed that we can work with RDF technology," Mr Cherdsak said.

The company wants to diversify its power generation business from biomass to solid waste, he said.

TPCH won a licence in the first RDF auction in November 2017 from the Nonthaburi Provincial Administration, with a capacity of 9.5MW. That project is under construction, scheduled to commence commercial operation in 2021.

It also took part in an auction of BMA's Nong Khaem and On Nut landfills for RDF projects.

"TPCH plans to expand the committed capacity of waste-to-energy power projects, almost doubling to 250MW by 2020 from 130MW in 2018," Mr Cherdsak said.