As the anti-vaccination movement creeps into Thailand, medical bodies warn that opting out can lead to aggravating consequences. Story: ARUSA PISUTHIPAN

Measles is now a serious epidemic. Rubeola, the virus responsible for measles, can sicken nine in 10 people who breathe the air that surrounds an infected person for two hours after one coughs. Despite the availability of the measles vaccine, the disease killed around 136,000 people last year, according to the World Health Organization (WHO).

"Measles is one of the most easily contagious infectious diseases. The virus is transmitted through the air we breathe. It is even more easily transmittable than the flu," said Dr Lapakorn Chatapat of the Thai Travel Clinic, Hospital for Tropical Diseases, in a previous interview with Life.

A global surge has made the situation worse, and Thailand this month made the list of countries with the 10 highest increases in cases between 2017 and 2018. The figures were part of the WHO's analysis of global measles and rubella data collected from 194 countries. Also, the analysis was based on the total confirmed cases of measles. Ukraine made the top of the list followed by the Philippines, Brazil, Yemen, Venezuela, Serbia, Madagascar, Sudan and France. Thailand was No.9.

Last year, 98 countries reported more cases of measles compared to the preceding year. Take the Ukraine, for instance. There were around 35,000 measles cases in 2018. And in just two months in 2019, the government of Ukraine reported almost 25,000 infected cases. The Philippines so far has seen around 12,000 measles cases this year. But it's a worrying figure compared to around 15,600 cases in the entirety of 2018. 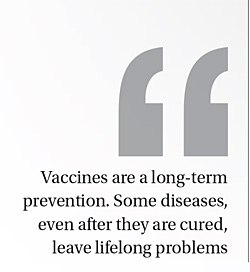 One factor reported to be responsible for such soaring measles cases is the growing anti-vaccine movement that threatens to undo decades of work to put the disease at bay.

"We have a safe, effective and inexpensive vaccine against a highly contagious disease -- a vaccine that has saved almost a million lives every year over the last two decades," said Unicef director Henrietta Fore in a statement.

The so-called anti-vax movement can be a harbinger of a more serious public-health problem across the world, as the WHO listed "vaccine hesitancy" among the 10 most pressing global health threats for 2019. Unfortunately, such a phenomenon exists in Thailand, too.

Assoc Prof Dr Kriengsak Limkittikul, a virology expert from the Department of Tropical Paediatrics, Faculty of Tropical Medicine under Mahidol University, said there are various reasons behind the anti-vax movement.

"In Europe, people opt out of vaccines for fear of their side effects," he explained. "Over a decade or so there was a claim that vaccines were associated with the development of autism. So people were scared and avoided being vaccinated. Although later it was proved that there was no such correlation, many still strongly believe otherwise."

There are certain groups of people, added Dr Kriengsak, who believe natural infection is far better than being vaccinated. In Thailand, however, the anti-vaccination movement is partly motivated by religious beliefs.

"Islam prohibits the consumption of pork. And vaccine manufacturers use substances that derive from pork as an ingredient -- gelatin, to be specific. So they abstain from vaccines altogether," said the specialist, adding that although Shiekul Islam in Thailand affirms that vaccination is allowed given its medical benefits, people are still against it.

Measles has wreaked havoc in Thailand's southernmost provinces, especially during the past two years. Last month, data from the Department of Disease Control revealed that around 300 infected cases countrywide were reported this year, with four deaths. When compared to the rest of the country, the measles situation in the southernmost provinces is very threatening. According to last year's statistics from the Bureau of Epidemiology, Thailand saw four per 100,000 people infected with measles. But the highest infection rate was reported from Yala province, with 51 per 100,000 people found to have been sickened.

Measles vaccination resulted in an 80% drop in measles deaths between 2000 and 2017 worldwide, according to the WHO's data. In 2000, 72% of babies around the world received one dose of measles vaccine by their first birthday. Fast-forward to 2017, when the WHO reported that the number rose to 85%. And from 2000-17, the vaccine helped prevent approximately 21.1 million deaths worldwide.

But people who are against vaccination are not just against the measles shot. "They opt out of all vaccines," noted Dr Kriengsak. The vaccination opt-out, according to Dr Kriengsak, has been found to be correlated with outbreaks, and this happens with not just measles but all vaccines.

"The lower the coverage, the higher the chance of contagion, especially when it comes to diseases that are highly contagious, like measles," he said. "The virus can spread from one person to the next if they are not vaccinated. But if the virus makes its way to a vaccinated person, it stops there."

Disease control could be difficult in areas where vaccine coverage is low. And it could bring about more severe consequences in high-risk groups.

"Take the measles vaccine, for example," said Dr Kriengsak. "It's not a stand-alone vaccine but a combination of measles, mumps and rubella known as MMR. So if people avoid a measles shot, it means they are not vaccinated against mumps and rubella.

"Rubella infection in pregnancy can lead to miscarriage or serious disabilities of the foetus. Influenza is a curable infection in normal circumstances. But pregnant women who are infected with the flu can give birth to babies with disabilities or brain defects.

"Vaccines are a long-term prevention. Some diseases, even after they are cured, leave lifelong problems."

To consider having a shot, Dr Kriengsak recommended two factors that should come into play. The first is geography; the second is cost-effectiveness.

"First, think whether or not it's worth it in terms of how much the disease is found in the area. We won't be, for instance, vaccinated against typhoid fever or cholera, even if there are vaccines against them, because their occurrence is low. Then, in terms of cost, see if the vaccine is affordable."

Side effects of vaccines should be no point of concern here.

"All vaccines are studied and tested for safety before being made available to the public. So side effects should not be a factor to consider if people should or should not be vaccinated against certain illnesses."

After all, the anti-vaccination movement is a belief. And the best way to deal with a false belief, said the virology expert, is to educate.

"Educating the public and giving them the right information is the first thing to do. A belief is so hard to change, so the authorities have to keep educating. Let people weigh the pros and cons. We cannot just set up a mandatory rule and force people into vaccination.

"Vaccines are not like medicines. People take medicine because they fall sick. But vaccines are something to opt for before they suffer. But vaccination is a social responsibility."