The spread of fall armyworms in corn fields across the country has prompted authorities to seek measures to minimise economic damage to the agricultural sector.

The nocturnal worms can survive on corn crops. They have adapted to the weather conditions in the country, according to the United Nations of Food and Agriculture Organisation (FAO). "We are seeing an invasive pest literally sweep across the Asian continent," said Kundhavi Kadiresan, Assistant Director-General, FAO regional office for Asia Pacific.

"Let's be clear that the fall armyworm is a pest that threatens our food security, our economies, domestic and international trade, and of course the smallholder farmers who wake up one morning to a cash crop under attack," Mr Kadiresan said. 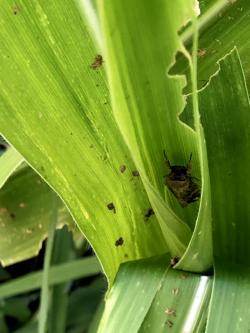 Looking for trouble: The spread of fall armyworms in corn fields across the country has prompted authorities to seek measures to minimise the economic damage.

The fall armyworms, a long-time American pest, are munching their way around the globe. The insect is now spreading to Asia through Yemen and South Asia, China and Thailand. According to the FAO, the worms are native to tropical and subtropical regions of the Americas.

In the African continent, it was first detected in Central and Western Africa in early 2016. In the larval stage, the insect causes damage to crops, feeding on more than 80 plant species.

The worms primarily affect maize, but also rice and sorghum as well as cotton and some vegetables. The moth can fly up to 100 kilometres per night and a female moth can lay up to a total of 1,000 eggs in her lifetime. The invasive pest was found in mid-December last year in the lower northern provinces of Kamphaeng Phet and Nakhon Sawan and is now spreading all over the country.

Officials from the Department of Agriculture (DOA) as well as local and international experts in pest management discussed the problem recently in Bangkok. The three-day meeting mulled over the situation and sought a national action plan to tackle the worms following the FAO-recommended guideline on integrated pest management.

Surmsuk Salakpetch, director-general of the DOA, said surveillance programs for fall armyworms were conducted immediately after receiving the warning message from FAO. Meanwhile, control measures such as mechanical, cultural and biological controls have been introduced.

The DOA worked closely with various departments including the Department of Agricultural Extension to support farmers in implementing an integrated pest management system to control the worms, she said. 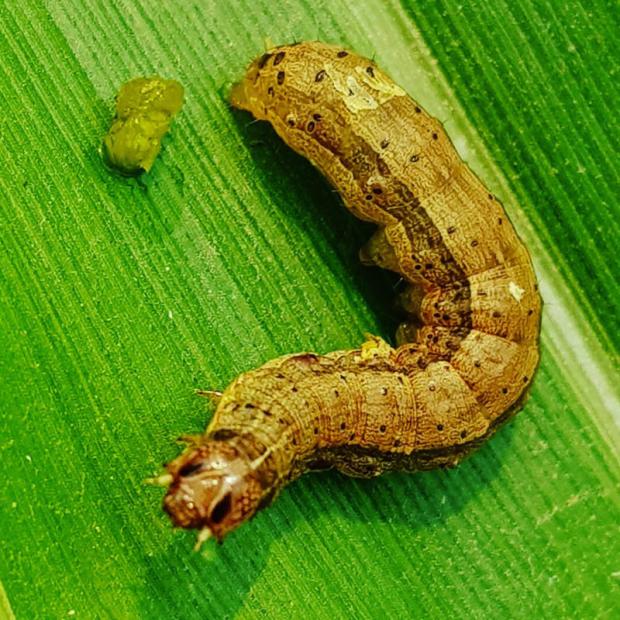 Persistent pests: A fall armyworm is seen crawling on a leaf.

Sarute Sudhi-Aromna, the director of the DOA's pest management research group, said researchers were experimenting with pest management by using chemicals such as spinetoram, chlorantraniliprole, chlorfenapyr and indoxacarb together with biocontrol measures to come up with a plan for the upcoming corn season scheduled to begin at the start of the rainy season in May.

"The fall armyworms are here to stay. We need to holistically manage them to reduce the adverse effects on agriculture," he said. "With this in mind, we have put in place a range of management measures with the support of international organisations such as the FAO."

Areeporn Upanisakorn, biocontrol management expert at the DOA, said he believes predatory insects could also be introduced as a practical solution to tackle fall armyworms as the recommended chemicals are still expensive and most farmers cannot afford such an investment. No details were available on how much a farmer could expect to pay or such an investment if forced to rely on chemical deterrents and whether the state is likely to help.