For many developing countries, tourism is a major contributor to economic growth, alleviating poverty and creating employment for women and young people, mostly in remote areas.

Asia and the Pacific as a whole has recorded exceptionally high growth in the past two decades in international tourist arrivals as well as outbound tourism. Thailand has moved from a low-income country to a middle-income country in less than a generation, thanks in large part to its tourism industry.

According to data from the World Travel and Tourism Council (WTTC), tourism in Thailand accounts for 6.4% of direct employment and 16% when indirect contributions are included. Over 38 million international tourists visited the country in 2018, up 7.5% from the year before. The Ministry of Tourism and Sports, forecasts that the number will break 41 million this year, and they will spend over US$70 billion during their stays. Direct receipts from tourism amounted to 12% of gross domestic product (GDP), and indirect revenues push the figure closer to 20%.

But such unprecedented growth has raised concern about irresponsible tourism and lack of careful management. Unchecked tourism growth can gradually damage the assets on which it depends, lead to the loss of local identities and values, while developing negative attitudes in host communities. 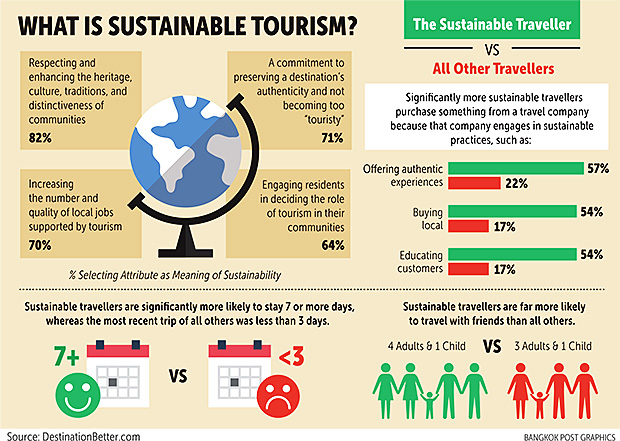 "Over-tourism is a major problem today, and many voices are calling for a stop to tourism growth," said Luigi Cabrini, president of the Global Sustainable Tourism Council (GSTC), which sets global standards and acts as the international accreditation body for sustainable tourism certification.

With 1.4 billion international tourists taking trips beyond their borders last year and 1.8 billion expected in 2030, in addition to some 5 billion domestic travellers, Mr Cabrini said such numbers are putting the planet at serious risk. Citing a recent report by the World Wildlife Fund (WWF), he says six out of 10 mammals, birds, fish and reptiles have been wiped out by humanity in less than 50 years, prompting experts to warn that the annihilation of wildlife is now an emergency that threatens civilisation.

Climate change is already producing catastrophic effects globally and major threats to many regions. Plastic consumption is another concern as most plastics consumed are not recycled and end up in oceans, he noted.

"A system to measure in a comparable way the amount of greenhouse gas emissions produced by transport and accommodation is missing, along with frustrating efforts to lead the tourism sector toward concrete mitigation targets," Mr Cabrini told the 2019 GSTC Asia-Pacific Sustainable Tourism Conference held in the northern Thai city of Chiang Mai. 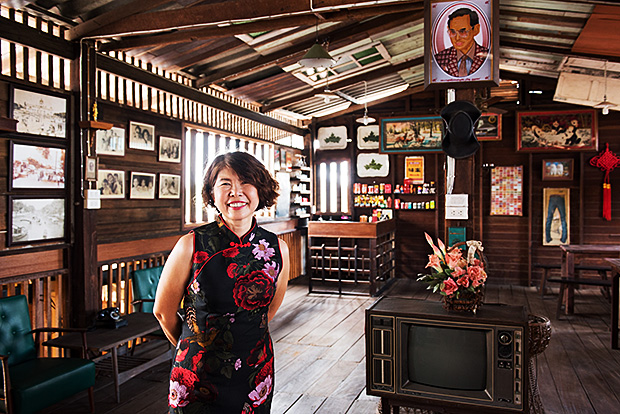 The Chinese market in Pattaya retains its old-style charm.

While both large and small businesses profit from tourism, the latter often do not have easy access to innovation and training that could improve their management. As well, prices paid by travellers do not reflect the full costs of goods and services such as pollution or water and land usage, he added.

"We know that sustainability is far from being integrated in the whole tourism chain and that good practices are still the exception rather than the rule."

On the other hand, several studies suggest that sustainable tourism could create more economic benefits than a "business as usual" approach, thanks to savings generated by better management of resources, a healthier and more productive working environment derived from a shared vision between management and staff, as well as enhanced market access.

"I see two main drivers," said Mr Cabrini. "One is a higher consciousness of the tourist as a responsible citizen, who rewards efforts to save energy and water, initiatives for protection of biodiversity, the respect of local cultures. These tourists make choices based on ethical principles and are ready to spend more when a hotel or a destination show that it cares for their shared values.

"Sustainable tourism is likely to offer better quality products by being more experiential and emotionally engaging. Today's travellers expect more from their holiday than just relaxing."

However, for the most part sustainable tourism is just a talking point at industry conferences, conceded Randy Durband, the CEO of GSTC.

"We are at the early stage everywhere for tourism to operate sustainably," he told Asia Focus. "Northern Europe, Scandinavian countries including Norway, Sweden and Denmark, as well as Germany and the Netherlands, are ahead of the United States and Japan. 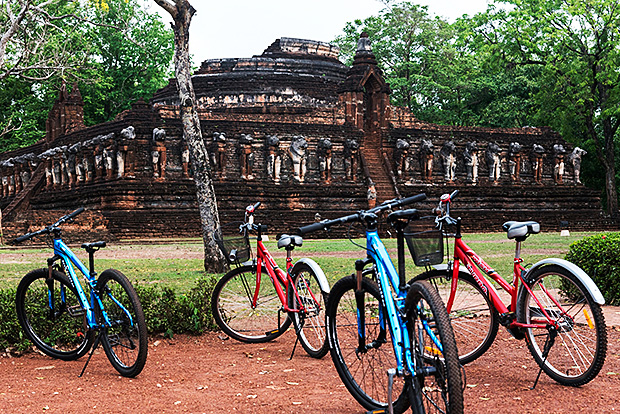 Kamphaeng Phet Historical Park has been earmarked for destination management under a world heritage theme.

"Japan and Korea are ahead of everyone in areas of recycling and many things but in general, in terms of broad use of this issue, I will say northern countries are ahead of other parts of the world."

The driving factors are better education and development because those countries have higher levels of education. "I think it directly links with the level of education concerning this issue. Because if you are informed, you have the concern," added Mr Durband.

The exponential growth of tourism, he says, has been driven mainly by the rise of the middle class in countries such as China, India, Indonesia and Thailand. More Asian countries, namely Thailand, Japan, and South Korea, now offer visa-free access for many international visitors.

"That has created a new demand for tourism. The Vietnamese suddenly have the ability to travel internationally. So it's a global phenomenon that is led by Asia," he said.

"Over-tourism is a global problem and it happens in many cities, many cultural heritage sites," he said, adding that in some places, water prices go up because there is not enough water supply to accommodate the tourist influx during the high season.

"Two things have to happen at once with that issue. One is that those crowded places need to be managed better, and all the opportunities for economic development of other places that get very few visitors," noted Mr Durband. 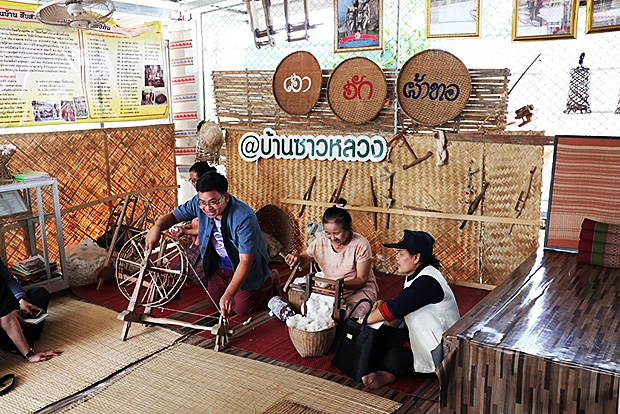 The northern province of Nan, known for its cultural heritage, is being promoted as a sustainable tourism community.

Less-visited areas -- such as Nan, Loei and Mae Hong Son in Thailand -- have tremendous opportunities for tourism. But they must be managed in a way that local communities can benefit from economic opportunities while the culture and authenticity that make these destinations distinctive are preserved. That way, visitors get a quality experience.

"You want to attract visitors that appreciate Thai culture rather than changing the place. You need to preserve the local culture," he said.

Better management is also required in tourism spots that draw a large number of visitors, such as the Grand Palace in Bangkok. Mr Durband noted that in Paris, for example, all the museums are closed on Mondays to allow for more thorough maintenance.

Better communication with travelers is a key. Guam, the American territory in the Pacific Ocean, reduced unintended touching of corals and bottom sand by as much as 75% simply by telling divers not to do so, Mr Durband explained.

In Thompson-Okanagan, a vast area spanning two mountain valleys in the western Canadian province of British Columbia, provincial authorities used to spend 100% of the tourism budget on promotion. Now they spend 60% on planning and development and the rest on promotion.

"Their revenue from tourism has increased, so they proved that with some planning, they can create a better experience (for tourists) and they don't have to spend much on promotion," said Mr Durband. "There is word of mouth. When visitors come, they have a good experience, they repeat and come back. They tell friends and family."

The United Nations World Tourism Organisation (UNWTO) sees promoting tourism in a sustainable manner as consistent with the 17 Sustainable Development Goals (SDGs) adopted by all member countries of the United Nations. 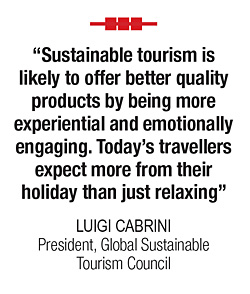 "However, the term 'sustainability' seems to be too far to reach and to some extent, sounds abstract and complex," said Mr Weerasak. "Thailand, which witnessed 38 million tourist arrivals last year and tourism revenue approaching 20% of GDP, has provided us with a more challenging job."

The tasks, he said, are to ensure fair distribution of tourism income to second-tier cities and local communities while maintaining good conditions of natural resources and environment, and securing local culture and identities.

A National Tourism Policy Committee is now focusing on making tourism a tool to maximise benefits in all aspects including economically, socially, culturally and environmentally. At the same time, negative impacts have to be minimised.

"All relevant agencies, for example, transport, agriculture, natural resources and environment, commerce, foreign affairs, community development, and private tourism-related associations, are represented in the committee. This is to ensure that tourism direction is being planned, implemented, and monitored in an integrated and balanced development approach," said the minister.

Quality tourism is not only about the products delivered to visitors, said Mr Weerasak, but also covers all elements of destination management which include the quality of the environment, water and air quality, in addition to safety and security, emergency and crisis response, transport and the financial system. These have to be looked at along with quality control in accommodations, restaurants and human resources.

"Quality tourism can be experienced through creative tourism -- a type of tourism activity that visitors can enjoy local wisdom and practices performed by the local communities they visit," he said. "Chiang Mai is among an example of using crafts and folk arts to uplift its role of quality tourism and allow tourists to learn all elements of the value chain of the creative city."

Dasta director-general Thaweepong Wichaidit said the agency hopes to have the six areas certified within three years. After that, the Tourism Authority of Thailand (TAT) will promote these areas to green tourists, most of whom are from European countries.

Dasta personnel have been trained over the past five years to help lift standards to international levels. It also aims to adapt GSTC standards to apply to 80 sites that are part of its Community-based Tourism (CBT) project starting this year.

"We look at sustainable tourism to promote the industry not only to generate higher growth but also to ensure that tourism income of as much as three trillion baht is better distributed to local communities instead of foreign travel agents that avoid paying tax while heavily destroying our natural resources," Mr Chuwit said.