The burden of the blazes
Thailand
Special Report

The burden of the blazes

On April 12 this year, many people in Thailand enjoyed playing with water on the first day of Songkran. At the same time, about 100 officers and volunteers were soaking in their own sweat and the water used to fight raging fires that threatened the forest as well as nearby villagers on Doi Chorakhe in Chiang Rai's Mae Chan district. 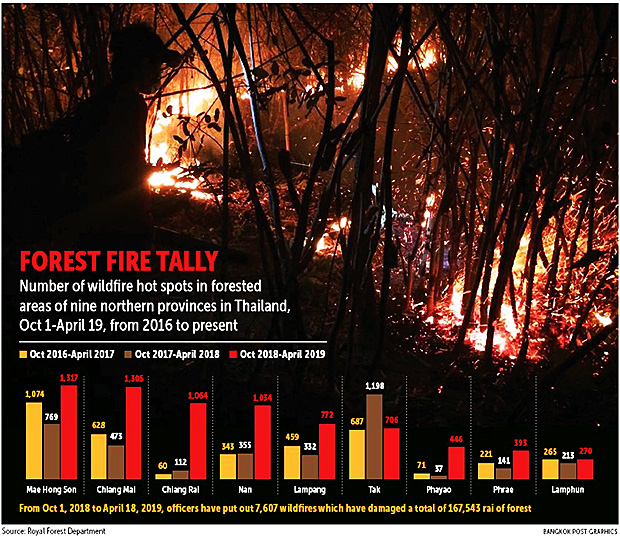 It took three days and three nights to get the blazes under control, although on Saturday more hot spots were found and extinguished by firefighters.

"Wildfires have been especially severe in 2019 after relatively few incidents over the past four years," said Athapol Charoenshunsa, director-general of the Royal Forest Department.

"We are facing El Nino this year. It's very dry and there's been no rain since November," he said, adding that the lack of recent fires had led to an accumulation of dry, combustible wood.

Adding to the problem are high-pressure weather conditions that prevent smoke from clearing, leading to the severe air pollution currently afflicting those living in the northern region.

"Over 90% of wildfires in Thailand are caused by humans. And more people have started fires this year," he said. 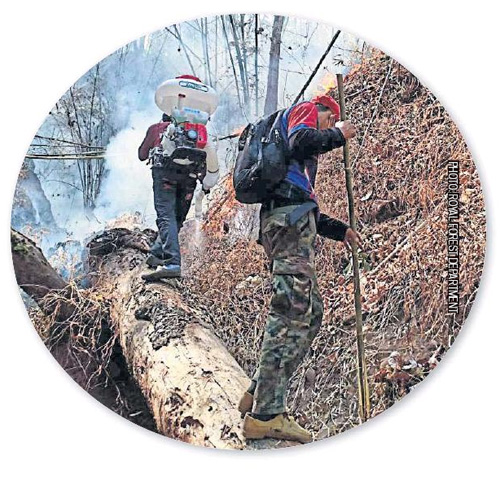 Isaret Chirarat, commander of the Yeao Fire (Fire Falcon) special task force who led the team to put out the fire in Mae Chan, echoed the remark.

"People still lack awareness. Farmers still burn their farmland [to clear the area before planting a new crop]. They make sure the fire will not damage their houses, but they don't care if the fire spreads into the forest," he said.

In addition, reckless people who throw cigarette butts onto the ground and hunters are also causes of the blazes, according to Mr Isaret.

"I watched hunters in Lampang's Doi Phrabat start fires on hills to corner rabbits. We caught them in the act," he said. 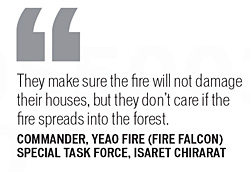 Mr Isaret noted that some groups of people also i ntentionally start fires because of personal or political conflicts.

"I talked to a kamnan in Chiang Dao [district of Chiang Mai] who said some people were unhappy that forest areas had been reclaimed [from illegal private occupancy]," he said.

With over 10 years of wildfire extinguishing experience with the Royal Forest Department, Mr Isaret said he has experienced the local damage they cause.

"The economy and tourism also fall like dominoes after a period of fires. They lead to smog and flights are disrupted. Tourists now do not come to the North," he said, adding that many, especially the wealthy Chinese, are now going to the provinces in other parts of the country.

"In the past, prevention teams would from time to time burn dry leaves and branches in the forests to reduce the likelihood of fires," Mr Isaret said.

However, the recent hazardous levels of PM2.5 and PM10 small particle pollutants resulted in a "no burning" order. This accumulation of dry leaves and branches only served to provide a large source of fuel for the fires that did occur, the wildfire fighter said.

Normally, the flames rise to 1-2 metres, but the flames on Doi Chorakhe last week were about 10 metres tall due to the number of dry leaves and branches in the vicinity, Mr Isaret said.

Nawarat Ruankhum, a 55-year-old volunteer from Samoeng district in Chiang Mai, has noticed the changes in the environment and felt the urge to help.

"I have worked on environmental issues for over a decade, but I noticed lately that the problem of wildfires has become more severe. I thought to myself something must have gone wrong," she said.

Farmers' burning their fields was normal in the past, but the fires did not spread to the woods. From 2013 onwards, she noticed this happening more and more.

"I saw community leaders going to help put out the fires more often. At the same time, I noticed the springs in Samoeng [forest] which led to more fires as well as causing people to struggle to find water.

"My family members also had asthma and allergies, all caused by the fires, so I decided to research the issue," she said, adding that her farm had later faced flash floods which hich brought a huge number of loose, b burnt branches showing the exte ent of the damage that had be een done to the forest.

She then asked d to join wildfire contr rol and mitigation net- - works and often ended up working to prevent and put out the blazes.

"It is so hot, tiring and dangerous," she said. "It's very risky for the people who help protect our land.

"I heard chicks screaming and saw hens trying to fly an escape from the fi saw the wild boars marks from where fled. I saw the fores plant life damaged,"

These networks, led by the Royal Forest Department and National Parks, Wildlife and Plant Conservation Department, help train volunteers who lack knowledge and experiences, but Ms Nawarat has always been determined "not to be their burden".

Nowadays, she can analyse a fire and help plan to control it as well as decide which equipment should be used to suit the incident. She keeps herself in a state of readiness to meet and plan with community leaders every time a wildfire is reported.

"We cannot work separately. No matter whose areas are affected, we must fight [the wildfire] together."

"State agencies alone cannot quickly put out the fires. We need cooperation, sustainability and efficiency. It is important to get cooperation from the civic sector. The locals in each area know the best routes into the forest. They are more familiar with the areas than the authorities," she said.

In each village in Chiang Mai, as far as she knows, at le east 20 villagers have joined the tea ams as volunteers. Accordi ing to Mr Athapol, about 5,000 5 of them have been deployed to help con ntrol the wildfir res in nine northern e provinces. Nationwide over 10,000 people are involved in stemming the blazes, including officials from the Royal Forest Department and the National Parks, Wildlife and Plant Conservation Department, t he military, administrae officers and also the civilian volunteers.

In terms of solutions, Mr Isaret said he believes that a certain level of burning of the accumulated dry wood and branches should be allowed.

"We also talk about knowledge and awareness. People [who caused the fire] know the rules, but they think they can get away with it," he said, suggesting that stricter law enforcement and civic participation in monitoring the forests are needed.

There must be a period when forests are strictly closed to the public, he said pointing out that animal hunters and honey poachers must be kept away.

"Farmers who are allowed to live and make a living in forest areas must also face strict legal enforcement. If they do not take good care of the forest, they must return the land. We need to use strong measures," he said.

"A lot of maze farmers on the slope areas burn their land to do away with the leftover corn cobs before starting a new round of plantation. We suggested sending the cobs to bio-electricity plants but they replied the cost would be too high. So why don't the farmers change the plants they grow? In Nan, they grow bamboo plants and coffee in the higher areas," Mr Isaret said.

Ms Nawarat said that after the North's wildfire season ends at the end of this month, the network will meet to discuss the lessons learned and make provisional plans for battling next year's round of blazes.

Mr Athapol said that wildfires also happen in Kanchanaburi and forests in the Northeast. However, now authorities are closely monitoring reserve water levels in the South, especially Narathiwat and Nakhon Si Thammarat, which act as a good indicator of impending wildfires between June-July.

Mr Isaret said that Narathiwat also faces underground fires occurring in swamp areas where the ground is laced with a network of tunnels that frequently dry out.

Since October last year, officers put out 7,607 wildfires which have damaged a total of 167,543 rai of forest. It is a small amount compared with the 102 million rai of forest nationwide, but "the impact is so huge despite being caused by the improper conduct of just a few people," he said.

"Life's necessities lie within the forests. If they are destroyed, you lack [good] air as well as water. And you die," stressed Ms Nawarat.