Pracha Jankrajang, aged 80, a customer assistant at the homeware department of Robinson Department Store's Bang Pu branch in Samut Prakan, surprised customer Waraphon Rattanamalai who wondered why a man his age was employed there.

Ms Waraphon said she had only intended to buy a plastic box for storing electrical wires and other bits and pieces, but she ended up buying a lot more as she was so impressed with the service he gave.

She also bought another smaller plastic box, two packs of silverware and two plastic trays, admitting it was Mr Pracha's polite yet clever sales technique that convinced her to buy more.

"I live in the neighbourhood and shop here often," she said. 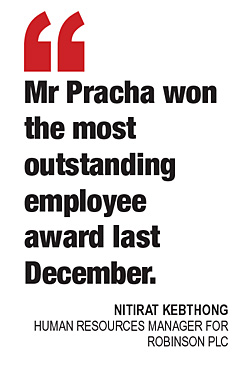 "He's an active and helpful staff member. When I suddenly remembered I wanted to buy some plastic trays as well while already paying at the counter, he volunteered to fetch them for me."

He was recommended by a village head when the company visited the community in search of suitable seniors for its project, said Ms Nitirat.

Mr Pracha was nominated because he had an impressive record of volunteering in the community and gave a good interview for the job, said Ms Nitirat.

When the company first agreed to hire him, Ms Nitirat said she was worried about his health given his age; but as it turned out, physical checkups showed him to be healthy and clear of any chronic diseases commonly found in the elderly, such as diabetes and high blood pressure.

Despite his age, Mr Pracha has never been a burden to anyone at work.

"To win the award, he had to beat many other outstanding employees including those from other companies in the same group. Hiring Mr Pracha has been a great success, and we're very proud of him," she said.

One co-worker described Mr Pracha as an amazing person and an ideal colleague to work with.

Several staff members at the homeware department are reluctant to deal with foreign customers because they have difficulties communicating in English, but Mr Pracha can not only speak English but also sell products to them, said the co-worker.

Mr Pracha was a school dropout but said he had learnt English from a book when he worked at a soft drink shop at Ubon Ratchathani airport, when American soldiers were based there during the Vietnam War.

The English listening and speaking skills he acquired from his book and communicating with the soldiers back then are now paying off, he said.

"All I have to do is ask them what they are looking for and then lead them to the right shelves," he said.

When he started out in August, he was first assigned to clean up and stock the shelves in the homeware department; but because of his impressive performance he was recently promoted to a customer service role, she said.

Besides his diligence, Mr Pracha is a health conscious person, which explains why he remains so healthy and active despite his age.

"He goes to the gym regularly and encourages his wife to come along as well," said Ms Nitirat.

As an employee at Robinson, he was able to take advantage of the staff benefit of a reduced price monthly membership to Fitbox Fitness.

Robinson is implementing Central Group's policy requiring its department stores to hire elderly people to work in all branches.

At this point, Robinson has begun hiring senior people to work at some of its 49 branches.

"Mostly, the elderly staff are between 58 and 64 in age, which means Mr Pracha is the oldest of all," said Ms Nitirat.

Mr Pracha also now earns enough money to begin paying off debts he incurred over the past 10 years when he had no source of supplementary income.

"Before I got this job, we were struggling to make ends meet. Every month, the rent, electricity and water bills cost more than 6,000 baht, not to mention other costs of living," he said.

Mr Pracha has four children, one of whom is still in school and financially dependent. He said his wife's beauty salon shop didn't have many customers as it was old and couldn't compete with new salons equipped with modern equipment.

Now he is saving money towards an upgrade of his wife's salon.

Previously, he tried various jobs such as working at a grocery shop, looking after patients, working as a security guard and driving a taxi.

However, employers often let him go with no reason given, although he assumed it was partly to do with his advancing years.

"I've been praying for a chance to get a job, not only to help me earn money but also to prove my value to the community," said Mr Pracha, before admitting that he was so excited that he could not sleep the night before his first day at Robinson.