Despite having incorporated Buddhist practices, various elements in Thailand's coronation ceremonies are deeply rooted in the Brahmin traditions

The entire country has finally witnessed the majestic splendour of King Rama X's coronation, which abounds in exquisite art and crafts that have been passed on for more than a century. Since the establishment of the Chakri Dynasty by King Rama I in 1782, the Kingdom has seen 11 coronations held for eight kings. King Rama X's ceremony is the 12th in the Rattanakosin era. 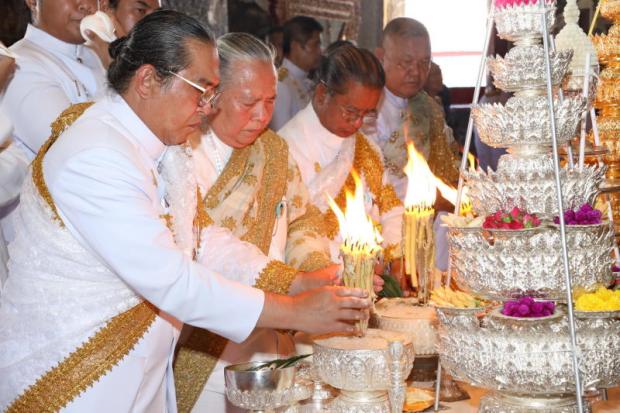 A number of practices in the coronation are led by the Chief Brahmin and are influenced by the rajasuya or a consecration of a king of India. Photo courtesy of the Royal Household Bureau

Although rites and rituals performed during the coronation incorporate Buddhist customs, Thailand's coronations have in fact been heavily influenced by Indian civilisation and Hindu Brahmin beliefs.

"Based on literature written by King Rama VI, it is stated that the royal coronation is Thailand's most important ceremony and is purely a Brahmin practice. Buddhist rites are not the core of the coronation. A person who performs the rituals is the Chief Brahmin, which is due to the Rajasuya [a consecration of a king] of India," said former dean of the Faculty of Arts, Chulalongkorn University, and scholar in Buddhist studies and Pali inscription Asst Prof Prapod Assavavirulhakarn in a recent seminar at Chulalongkorn University organised in honour of His Majesty the King's coronation.

The coronation is also part of an ancient civilisation not just for Thailand but for humanity. A transformative process where the king transcends ordinary human status and enters the realm of divinity, the coronation of King Rama X -- the first in 69 years -- should encourage all Thais to pay attention to the country's history and civilisation, said deputy dean of Chulalongkorn University's Faculty of Law, Asst Prof Chachapon Jayaphorn.

"The coronation should not be looked at as something outdated or a waste," he said. "Rather, the coronation is a ceremony that allows us Thais to truly learn about our roots. Once we feel sentimental and devoted towards our own roots, we will know how to behave as a citizen of this country."

Indian culture, according to Prapod, considers water and fire to be two significant ceremonial elements. Water is believed to have purifying power and, therefore, is used to purify the King prior to the coronation as seen from the ablution and anointment ceremonies, which took place on Saturday(May 4).

"Water used for the ablution ceremony purifies the King before the following rites can take place," he explained. "According to Brahmin beliefs, ablution turns the king into Brahmin, after which he changes into his fully decorated regal vestment, ready for the next rites." 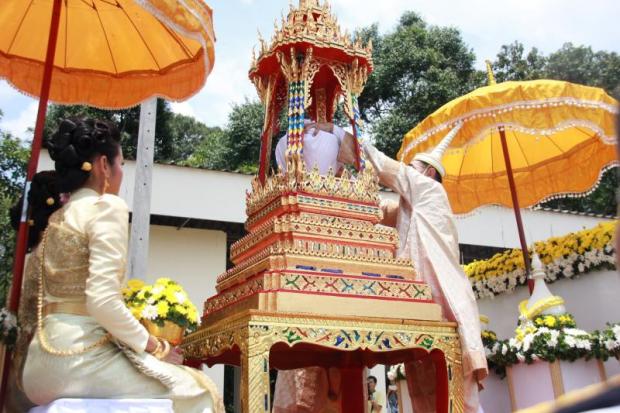 "Water in a way is a rite of passage," he added.

Also after the purification bath, when the King moves to the octagonal Atha Disa Throne, water again plays a quintessential role, as the King is presented with the anointment water by prominent figures in eight directions. "The anointment-water presentation to the King symbolises acceptance, a sign that the King is accepted by [people from] all directions," said Prapod. "It is a symbol of commitment for governance."

For Indian coronations, there is no record as to where the purification and anointment water comes from. But unlike Thailand, water used in the coronation in India contains milk, fruits and leaves deemed holy and auspicious.

The use of colours, materials and the construction of temporary architectural structure have also been influenced by Indian civilisation, where the king is considered divine, said Pirasri Povatong, an associate professor from the Faculty of Architecture, Chulalongkorn University. An architectural historian, Pirasri specialises in architecture and architectural practice in Siam. "Despite several changes made to the architectural elements of the coronation, the ceremony still maintains the gist, which has been passed on for generations. The architectural design is all based on the Hindu belief of devaraja, which embodies the concept of the divine king." 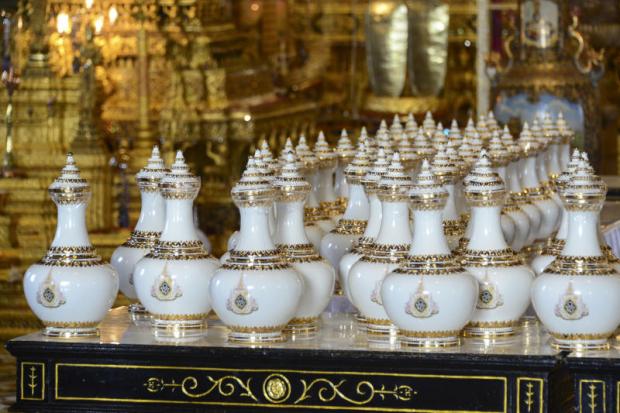 Water takes centre stage at coronations, which have been heavily influenced by Hindu Brahmin beliefs. Ministry of the Interior

When it comes to architecture, certain cultures and traditions in Southeast Asian countries have been more or less shaped up by both Buddhist and Brahmin beliefs, Pirasri added. A pavilion-like structure specially built for the coronation's purification ceremony, for example, is decorated with white and gold. Separating the pavilion from other areas is a gate, which is believed to keep the divine area from all others. During the ablution, the king dresses also in white, signifying his transformation to Brahmin.

"Thrones used in the coronations are adorned with intricate details and sculptures of mystical creatures. According to Hindu beliefs, the throne embodies Mount Meru, which is the centre of the universe," explained Pirasri, adding that many other architectural elements and the use of space inside throne halls of the Grand Palace also rely on the Hindu concept of the divine king.

The sound of music has long been considered a fulfilment for ceremonies. The Vedas, a large body of religious texts from ancient India, as well as other scriptures, for example, were churned as a way to glorify gods.

Asst Prof Pattara Komkum of the Faculty of Fine and Applied Arts, Chulalongkorn University, explained that ceremonial music and musical instruments have been used since the reign of King Ramkhamhaeng of the ancient Sukhothai Kingdom, through the period of Ayutthaya and Rattanakosin. 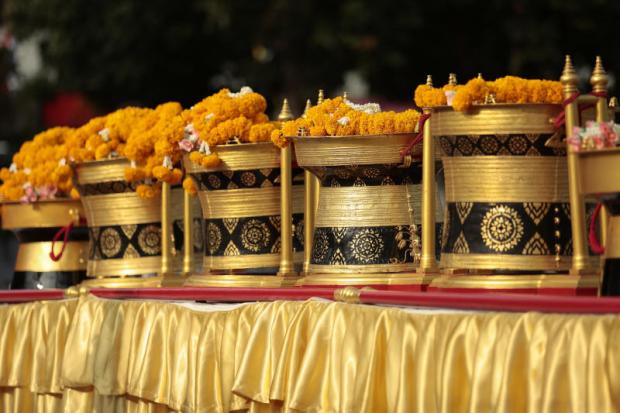 Having been used since the reign of King Rama I, bronze drums are beaten to convey abundance and prosperity. Photo: Patipat Janthong

"Musical bands for royal ceremonies are mainly the prakhom band and piphart band," said Pattara who once served as the Royal Household Bureau's band member. "The prakhom band is basically comprised of the conch shell, Siamese bugle and megaphone-shaped trumpets. The piphart band, on the other hand, is an ensemble of wind and percussion instruments including Thai xylophones, drums and others."

Certain musical instruments for the royal ceremonies are played to create the heavenly sound for the King, such as conch shells. The one used during the coronation of King Rama X dates back to the early Rattanakosin period. A gong also aims to produce a sound of luck and victory. Bronze drums -- a kind of drum used only for the king -- date back to the reign of King Rama I and are beaten to convey abundance and prosperity.

"Musical bands for the royal ceremonies aim to complement the rites and to honour the King," said Pattara. "The practice must be carried out in a humble manner and with determination. For band members and everyone involved in the coronation, it's an honoured contribution to the King and all members of the royal family."