Students in Grade 3 at Baan Ta Art School shake hands as they learn about global citizenship and respecting diversity during a social studies class. Global citizenship, an essential 21st-century skill for young people, refers to having a sense that you belong to a broader community, with more interconnectedness between local people and the wider population.

Watcharapong, 16, lives in a small wooden hut on the banks of the Moei River along the Thai-Myanmar border in Mae Sot district of Tak. His Myanmar father and mother work on the Myanmar side as wage workers while his younger sister works as a waitress at a casino there.

Every day, Watcharapong and his other sister Araya, 12, walk on an earthy pathway for about half an hour to Baan Ta Art School, which is a buffer school, in the district.

A buffer school provides knowledge about Asean, and teaches one Asean language depending on the country where the school is close to -- in this case the language is Burmese.

What is special about this school is that even though it is situated on Thai soil, about 88% of its students are Burmese nationals.

"My family moved here 14 years ago because of the bad economy in Myanmar," says Watcharapong, who is noticeably smaller than his Thai peers.

"I still remember the first day I went to school. I put on a casual outfit because I had no school uniform. And I did not understand a word the teachers said because I didn't understand Thai."

Watcharapong is among the more than 13,600 non-Thai students who have enrolled at public schools under the Education Service Area Office Tak 2 jurisdiction.

Non-Thai students account for 28.5% of all the students there, according to government statistics.

Tak is one of the provinces where many migrants live and work because it shares its western border with Myanmar. In 2016 about 16% of Tak's registered population of 632,000 do not have Thai nationality, according to the Department of Provincial Administration. 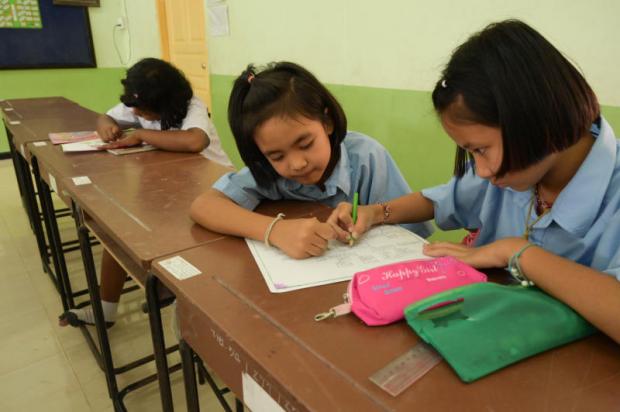 Youngsters put their heads together during class as they gain deeper insights into the meaning of global citizenship, which highlights openness toward people from other cultures.

Considering the cultural diversity in school communities and the educational challenges migrant children face, it is important for all students to recognise and appreciate diversity and multiple identities, including culture, language, religion and gender, and embrace their common humanity.

"Unicef feels there is a need to promote inclusive education, particularly towards migrants, and enhance students' skills as required for global citizenship. We also [want them to] respect diversity, especially now we are part of the Asean Community," said Rubkwan Tharmmapornphilas, an education officer at Unicef Thailand.

Global citizenship refers to a sense of belonging to a broader community and common interconnectedness between the local, national and global, according to Unesco. It implies greater openness to people from other cultures, respect for "cultural otherness" and a sense of global-mindedness.

Global citizenship is an essential 21st-century skill for young people who have to navigate their lives in an increasingly interconnected and diverse world.

With financial support from the EU, Unicef has worked with the Tak office of the Education Service Area since 2018 in designing activities and developing skills required for global citizenship for students from Grade 1 to Grade 9. It also promotes respect for diversity and integrates this into lessons.

The initiative is part of a larger multi-year partnership between Unicef, the EU, the Thai government and civil society to protect children affected by migration, which aims to strengthen policies, services and societal attitudes and practices for migrant and stateless children in Thailand. 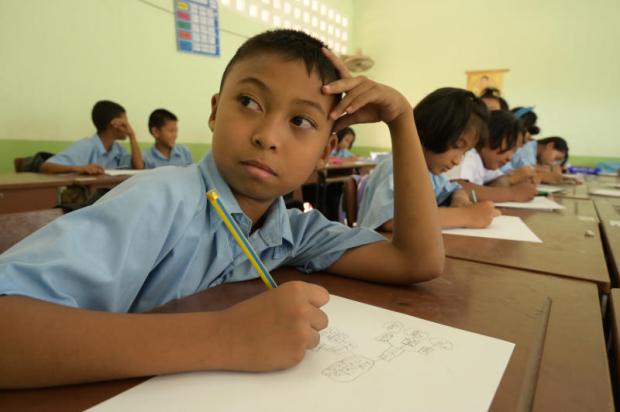 Watcharapong, 16, thinks about what to do for his assignment in Grade 6 at Baan Ta Art School.  Photos by Roengrit Kongmuang

"With good knowledge, skills, values and attitudes of global citizenship and respect for diversity, students from different cultures and backgrounds can live harmoniously without discrimination," said Warraput Intasuk, who teaches social studies to students from Grades 1 to 3 at Baan Ta Art School.

Nerisa Pasukolamas, a teacher at Baan Mae Gu Nuea School, said incorporating the concept into lessons should prove useful not only for schools in Tak, but for any schools with a mixture of Thai and foreign students.

"The lessons will be of use to schools in provinces where there is much diversity and differences in culture, nationality and social backgrounds," she said.

"They will help bridge differences and create a more harmonious society."

For Thanakorn Buatoom, 14, a student at Baan Huay Muang School, the activities have helped him gain a greater understanding of equality.

"I think Thai and Myanmar students are the same -- we're all human beings. There's no point discriminating," said Thanakorn, who is in Grade 8. "Just like the rich and poor. We can be friends."

Unicef is working closely with the Office of the Basic Education Commission to explore the possibility of implementing the programme in other provinces, including in the capital and its vicinity where there are schools enrolling migrant children.

"This will help to establish a harmonised atmosphere in school settings, which will make it easier for new students, including the children of migrant workers, to integrate," said Rubkwan.

"This will also help to create a more peaceful society." 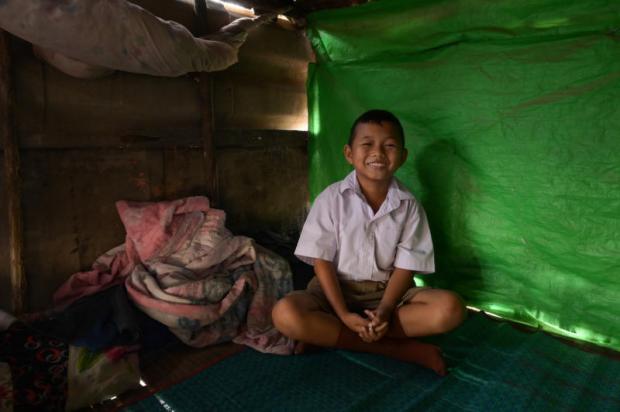