Preventing climate change in the face of urbanisation

No place like home: Homes pop up along the Chao Phraya River in front of a construction site in Bangkok. The capital is among the mega coastal cities projected by a UN panel to become totally or partially under water as global warming boosts sea levels.

Urbanisation in Southeast Asia is increasing at an overwhelming pace, at a rate five times that of the rest of the world.

Cities where people migrate to work and live are getting overcrowded. By 2030, the urban population in the region is projected to increase from about 270 million to 373 million people.

The fast and furious rate of growth is wreaking havoc on local environments.

A large portion of city infrastructure systems, such as transportation, government buildings and manufacturing zones, are planned and built in inappropriate locations.

Examples are not hard to find. For instance, rice plains in Ayutthaya, the ancient capital city of Thailand, have been designated as industrial estates, leading the area to become more prone to flooding.

Roads in Songkhla municipality and Phuket are built over canals and water drainage areas, also subjecting these flagship economic cities to large floods.

In Bangkok, government office buildings in Soi Ari and Phaholyothin are built on water retention areas.

Due to instances such as this, many cities are now highly vulnerable to the risks posed by climate change such as floods, droughts and rising sea levels, according to Pakamas Thinphanga, programme manager at the Thailand Environment Institute (TEI). 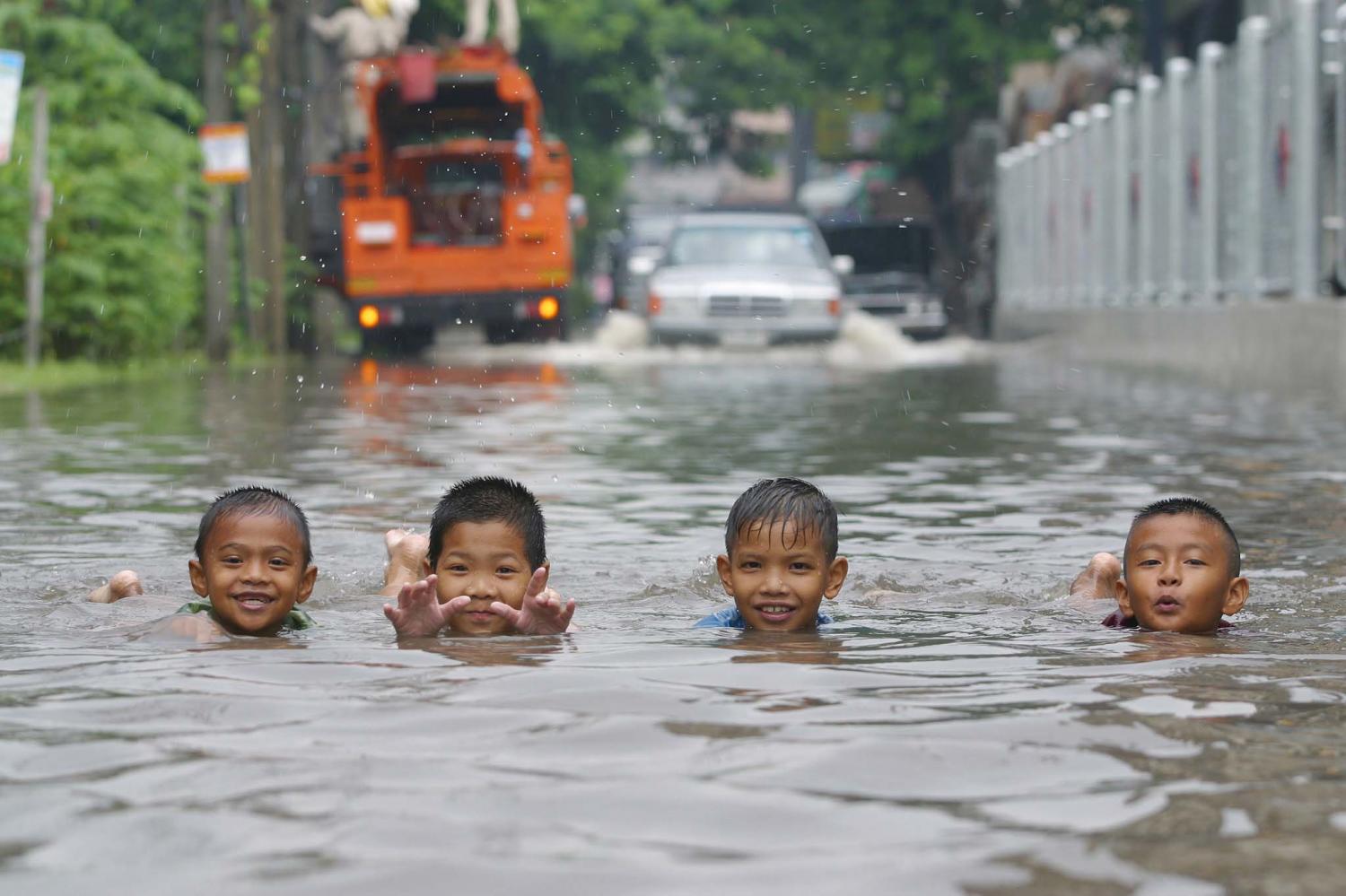 Paddling around: Young children take a dip in a flooded soi off Lat Phrao Road after heavy rain in Bangkok last year.

These risks are also compounded by the ecological changes produced by rapid and often unplanned urbanisation, including changes to land use, filled-in canals and land subsidence.

"Cities in this region are expanding in an unsustainable manner. Climate change will make existing problems caused by unchecked urban expansion more difficult for residents and authorities to handle," Ms Pakamas told participants at a policy forum held by Chulalongkorn University.

The forum, which was held on Wednesday, brought urban planning experts from Thailand, Vietnam, Cambodia and Myanmar to share their knowledge on sustainable planning in the face of climate change.

UCRSEA is a five-year project led by TEI and the University of Toronto.

"We have found that the eight secondary cities have poor urban planning practices, and departments whose actions affect disaster risk mostly act autonomously without sharing information and coordinating with each other," Ms Pakamas said.

Hue Le Thi Van, a researcher at Vietnam National University's Central Institute for Natural Resources and Environmental Studies, said that in Vietnam, planning decisions are mostly made at the central government level without any effective cross-sector consultation and discussion.

"Another problem is the limited amounts of available data, which is necessary to properly prepare and plan for disasters. For example, different agencies collect their own meteorological and other types of data without sharing it with each other, causing gaps and inconsistencies to arise," she said.

Jutamas Kaewsuk, a researcher at Mahasarakham University's Faculty of Environment and Resource Studies, said research she conducted with the local administration in Khon Kaen province found bureaucratic red tape was a major hindrance to proper planning. 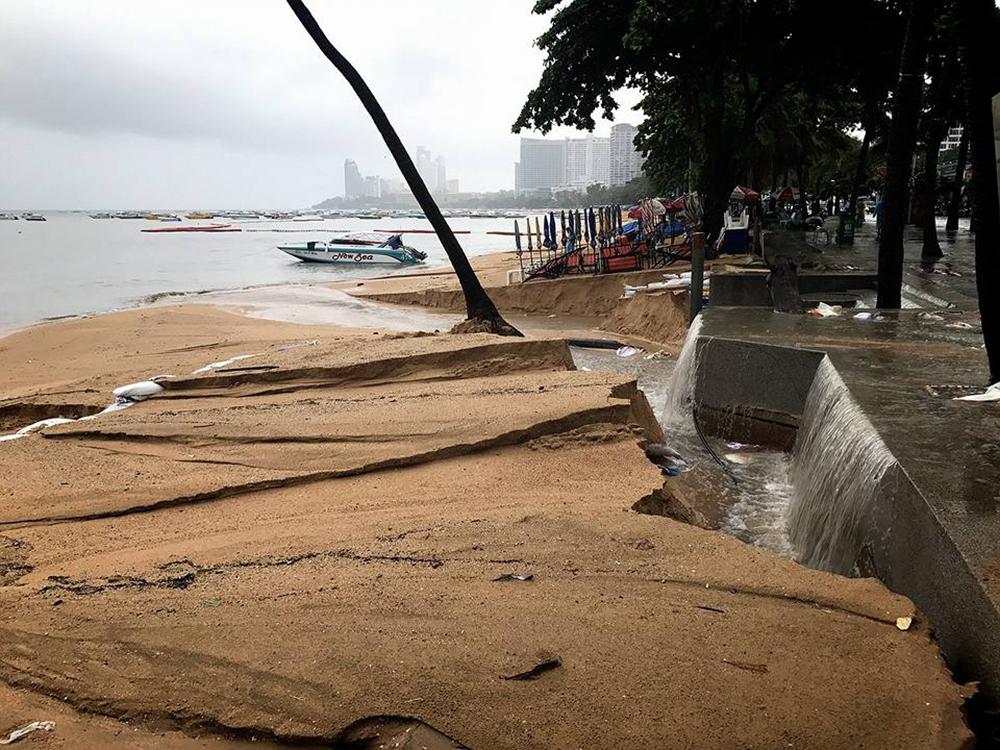 WHAT'S CRACKIN'?: A beach in Pattaya City is eroded in October 2017. Coastal areas have been touted as being highly vulnerable to climate change.

"In Khon Kaen, there are multiple levels of national, regional and local government operating in both overlapping and individual jurisdictions. However, the effects of urbanisation and climate change are interconnected and spread across multiple jurisdictions," she said.

There has also been a lack of effective communication between various levels of government.

"This leaves the local communities of Khon Kaen vulnerable to negative effects of both urbanisation and climate change as the authorities cannot help them effectively," she said.

Examples include problems caused by the expansion of infrastructure for transportation that is built in flood drainage paths.

This has resulted in the repeated flooding of communities and paddy fields in the eastern part of Khon Kaen municipality. 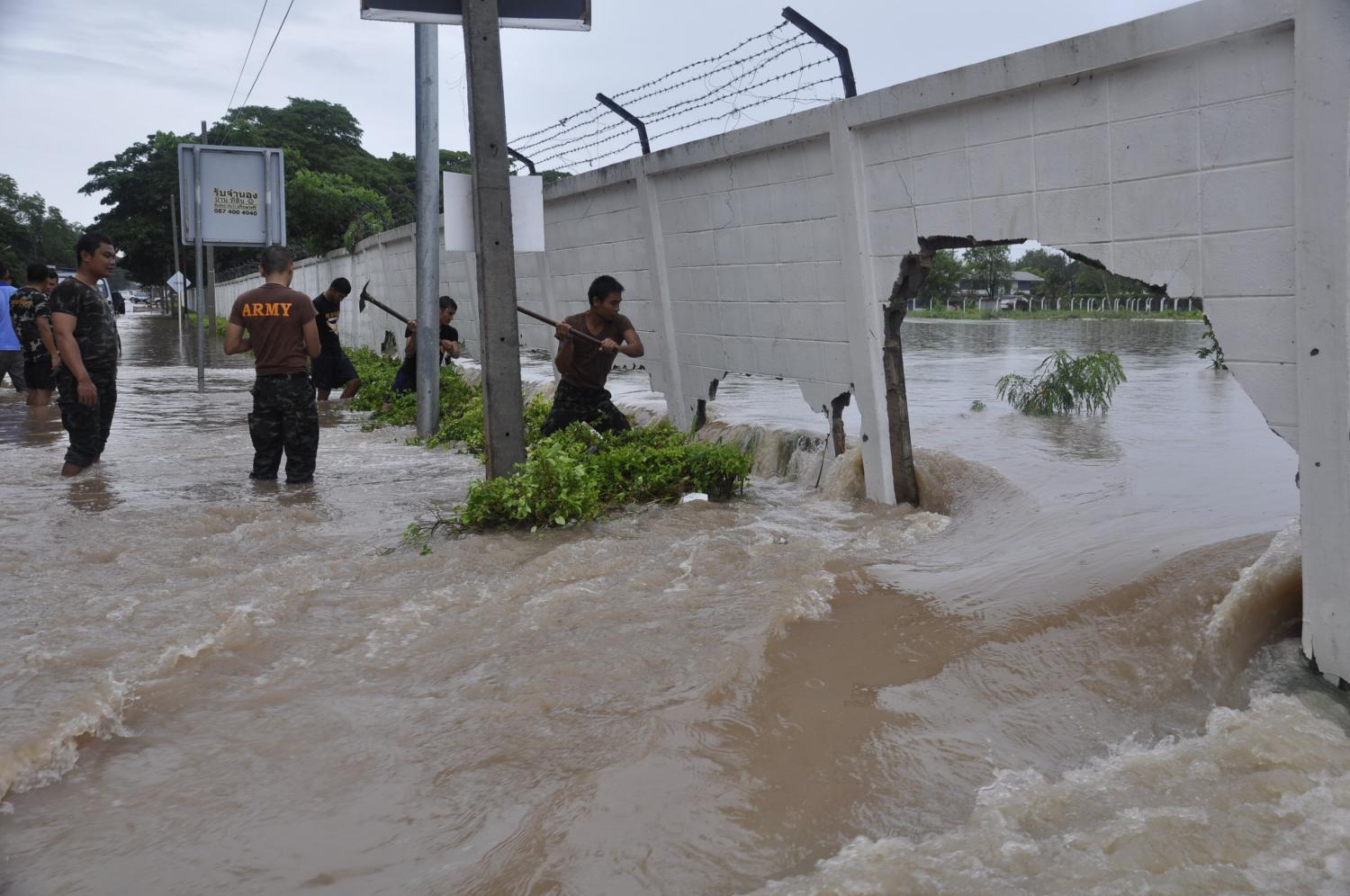 Opening the gates: Soldiers knock down a wall to release water that flooded a municipality in Nakhon Ratchasima province in July 2013.

However, the staff typically have no background in urban planning, as there are only 30 urban planners in the entire country.

Consequently, the Myanmar government has prescribed a national development plan -- a one-size-fits-all development blueprint for every township, without paying much attention to the individual geography of various towns.

"In Myanmar, the disaster management plans of national level agencies are not clearly delineated and there are no disaster preparedness plans. Furthermore, laws only prescribe the responsibilities of national and state governments, not those of agencies at the local level," he said.

His research in Battambang city in Cambodia found that flooding has become more intense and seriously affects the whole province.

"There are reports that the development of the railway caused an increase in flooding because drainage canals were blocked by sediment displaced by the construction," he said. 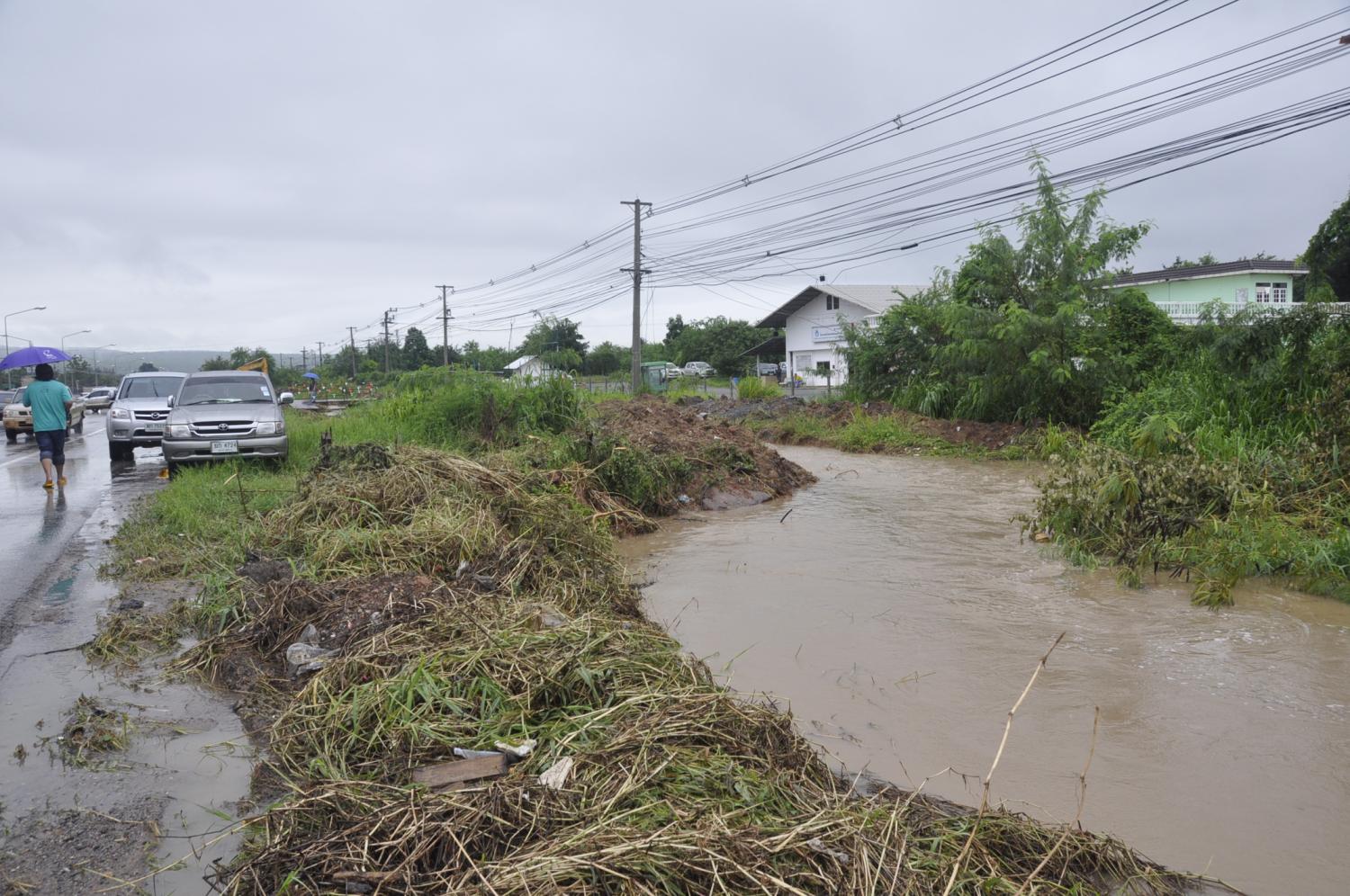 Stuck in the mud: Mittraphap Highway, known as the main thoroughfare between Bangkok and the Northeast, is flooded in October 2016.

Ms Pakamas, who is a co-director of the UCRSEA project, said these findings should sound the alarm for governments to pay more attention to urban planning practices and spend more time making location assessments, not just building infrastructure.

Without taking the environment and ecology into consideration, urban areas -- the economic drivers of each of these countries -- will be victims of climate change.

Apart from town planning, these governments need to ensure that all key agencies -- the central government, local administration, communities and the private sector -- share the same goals, use the same blueprints and communicate regularly. 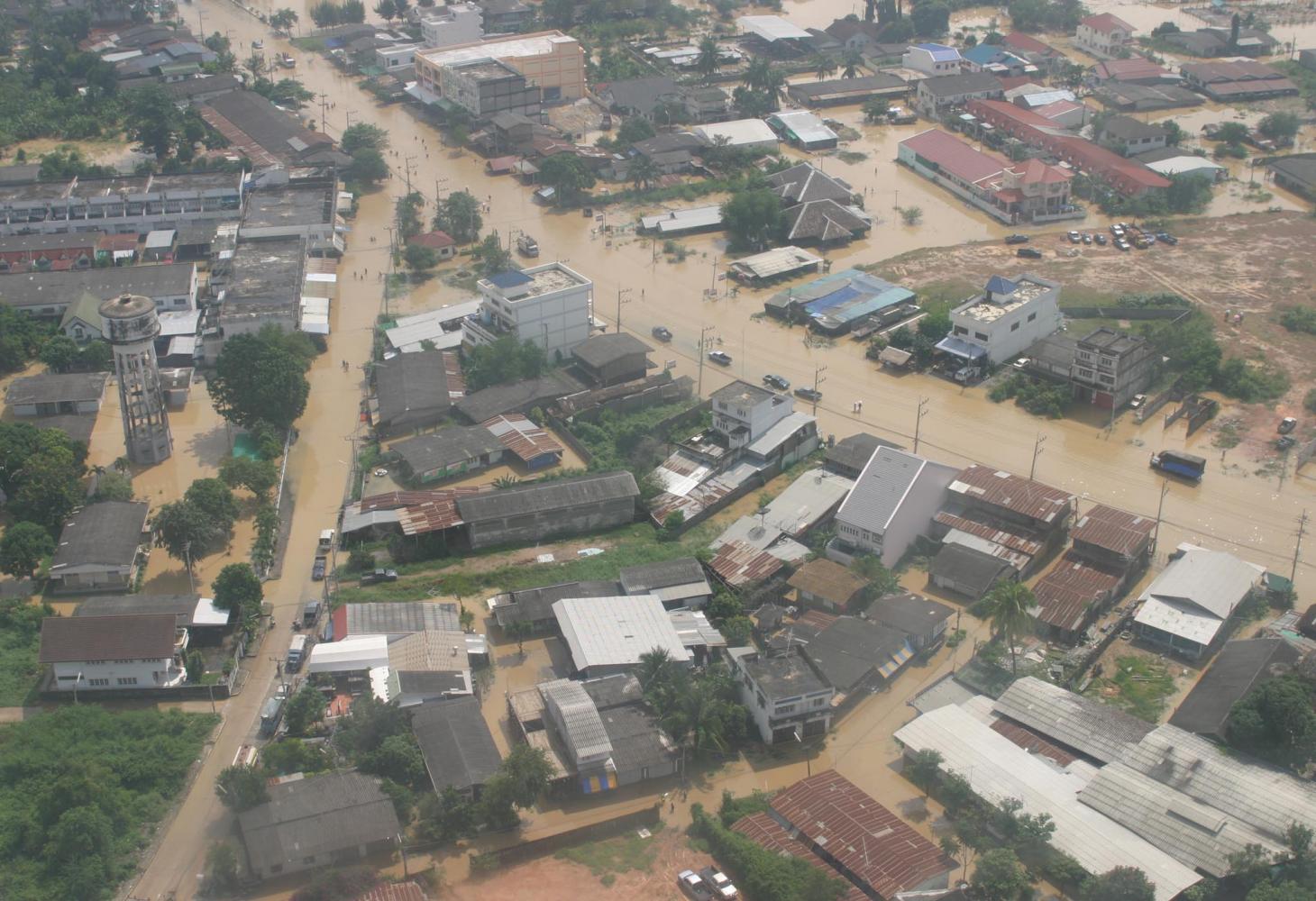 Aerial view: Prachuap Khiri Khan province is flooded after a local dam opened its gates to relieve the pressure of excess water due to heavy rain.

Ms Pakamas is also concerned that many cities do not have long-term plans for climate change adaptation.

Preventing climate change is still a lower priority than short-term economic growth because the level of understanding about climate change and its impacts is still low, she said.

"We need to work on changing the mindset of all stakeholders, making them see the long-term benefits of increasing urban capacities while also combating climate change, rather than seeing it as a burden," she said.