When the gibbons call
Travel

When the gibbons call

Scouting for the unique species in Khao Yai National Park

A white-handed gibbon with her young offspring. (Photo: Kulpat Saralamba)

The call of gibbons was louder when we went further inside the forest area of Mo Singto in Khao Yai National Park, which covers 2,165km² in four provinces in the central and northeastern regions.

Mo Singto is a habitat of the white-handed gibbon, a small ape with white fur on the upper sides of hands and feet. It is an endangered species.

"We are close to where the gibbons are. We will take a shortcut to make sure we will not miss them," said Anuttara Nathalang, a biologist of the National Center for Genetic Engineering and Biotechnology (Biotec), an affiliate of the National Science and Technology Development Agency (NSTDA). She and her team have studied the biodiversity of the Mo Singto area for more than 20 years. 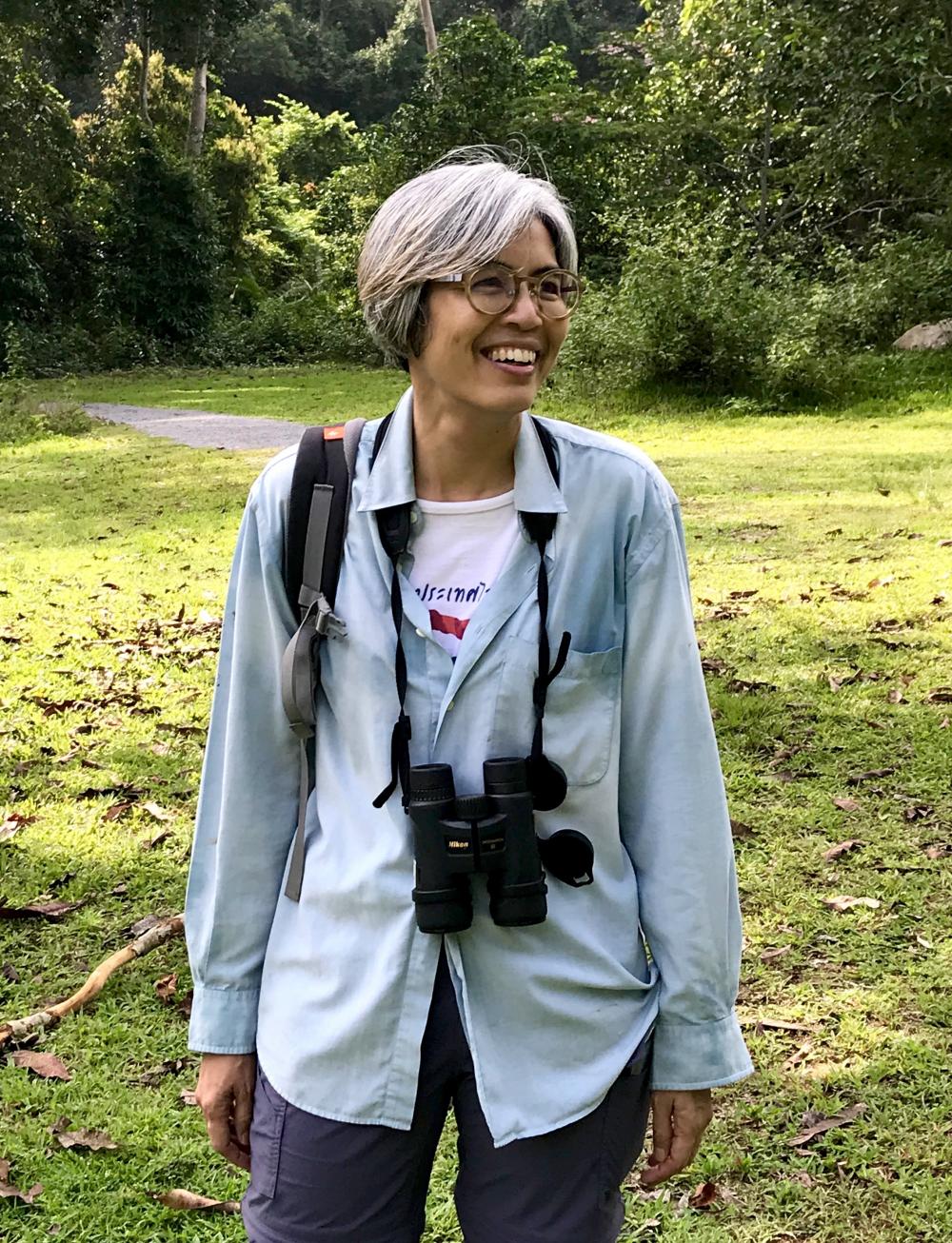 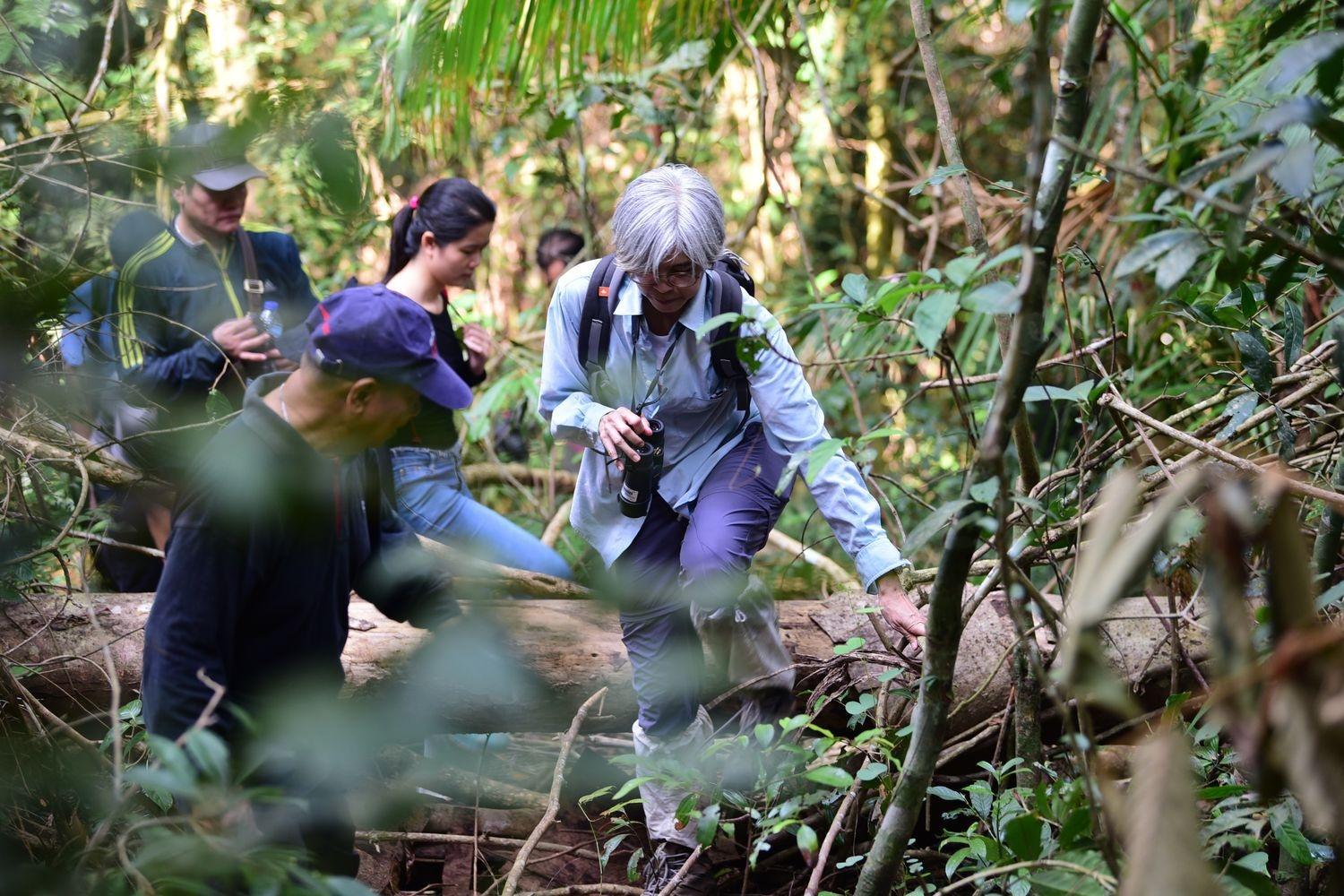 We negotiate our way to see the gibbons. Sometimes we had to step on or walk under fallen trees. The National Science and Technology Development Agency (NSTDA)

Mo Singto is an evergreen forest situated at an altitude of 725-815m. The size is about 190 rai. It is located about 1km from park headquarters. The forest has many types of plants and tall trees.

Our journey started after dawn broke because morning is the time when gibbons leave their sleeping tree, where they spend the night for resting, to find food. We would have a good chance of seeing them sitting high in the canopy or swinging from one to another branch as if flying. Their food is varied, ranging from ripe fruits like figs, ngo pa or wild rambutan and yang on to young leaves, flowers, vines and insects.

Before the journey began, the research-team members handed each of us a pair of white anti-leech socks. It rained the night before, and leeches could easily crawl on the moistened ground in the forest.

The trail was not difficult to negotiate during the first part. We walked along a narrow trail. When we went deeper into the forest, we sometimes had to climb up and down the hilly land and fallen trees. Along the way, we stopped from time to time so Anuttara could explain the types of trees, flowers or mushrooms, and their functions in the forest.

Every time we stopped, instead of focusing on Anuttara, my eyes looked to the ground for leeches. I always saw them lift their upper body to detect us. From time to time, some of them crawled on my shoes. My first reaction was to flick them off one by one. The leech always stuck on my finger instead.

"You don't have to be afraid of the leech. When you spot it on your shoes or pants, use your index finger and thumb to take it off and roll it between the fingers. Then it will be dizzy and fall off," Anuttara said while demonstrating to us how she always deals with leeches. 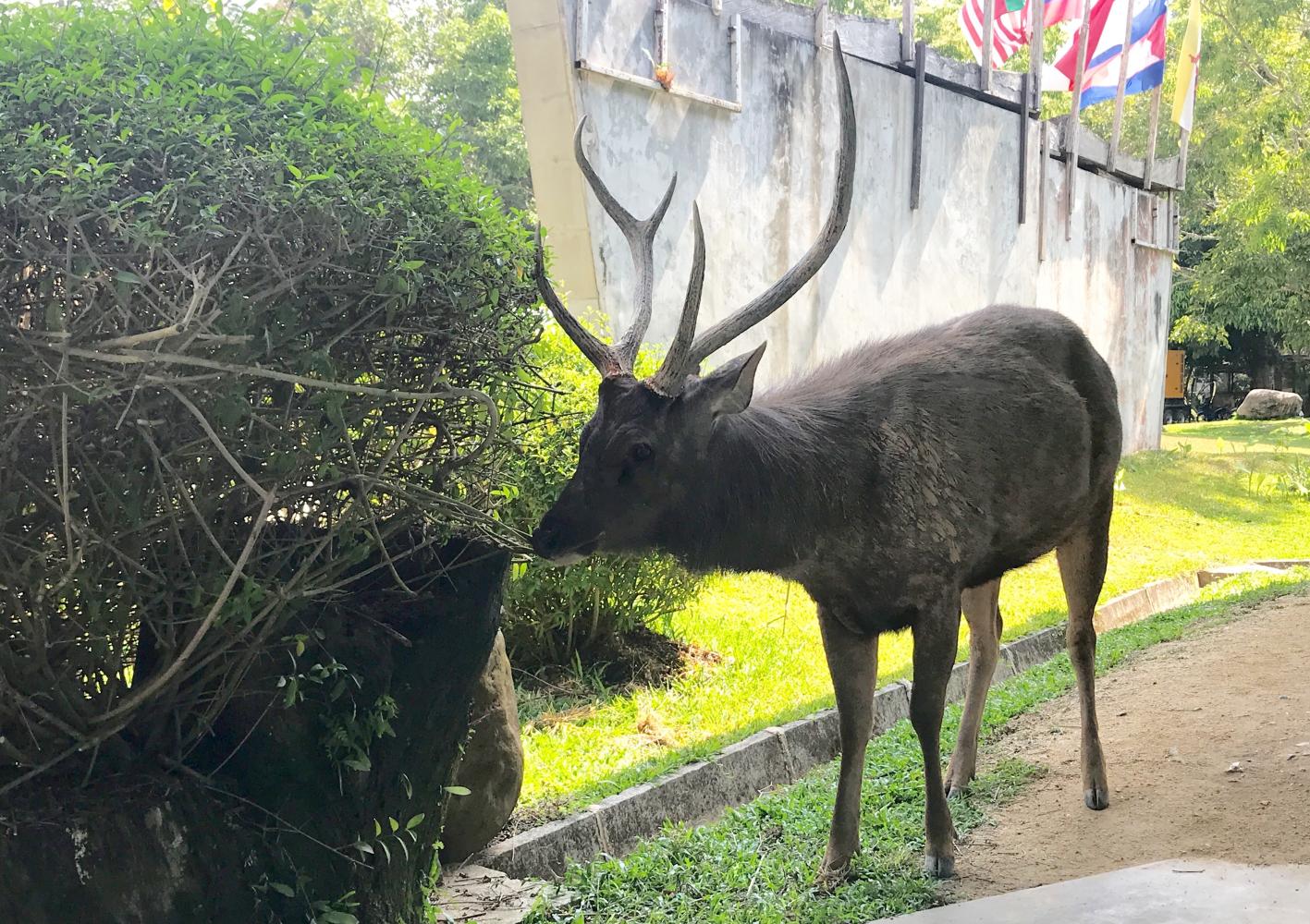 The research team spends about 20 days a month in Mo Singto (so they know how to get rid of the bloodsucker). They walk the forest to record the behaviours of gibbons. They want to know the role of the gibbons in forest regeneration.

The project was started in 1996 by Warren Y. Brockelman, a professor in zoology of Mahidol University.

"It began with a simple question. We wondered how the gibbons knew where and when they can find food," said Anuttara.

The research team chose Mo Singto, as it is a habitat of the white-handed gibbon. The work received support from the National Park, Wildlife and Plant Conservation Department and NSTDA. 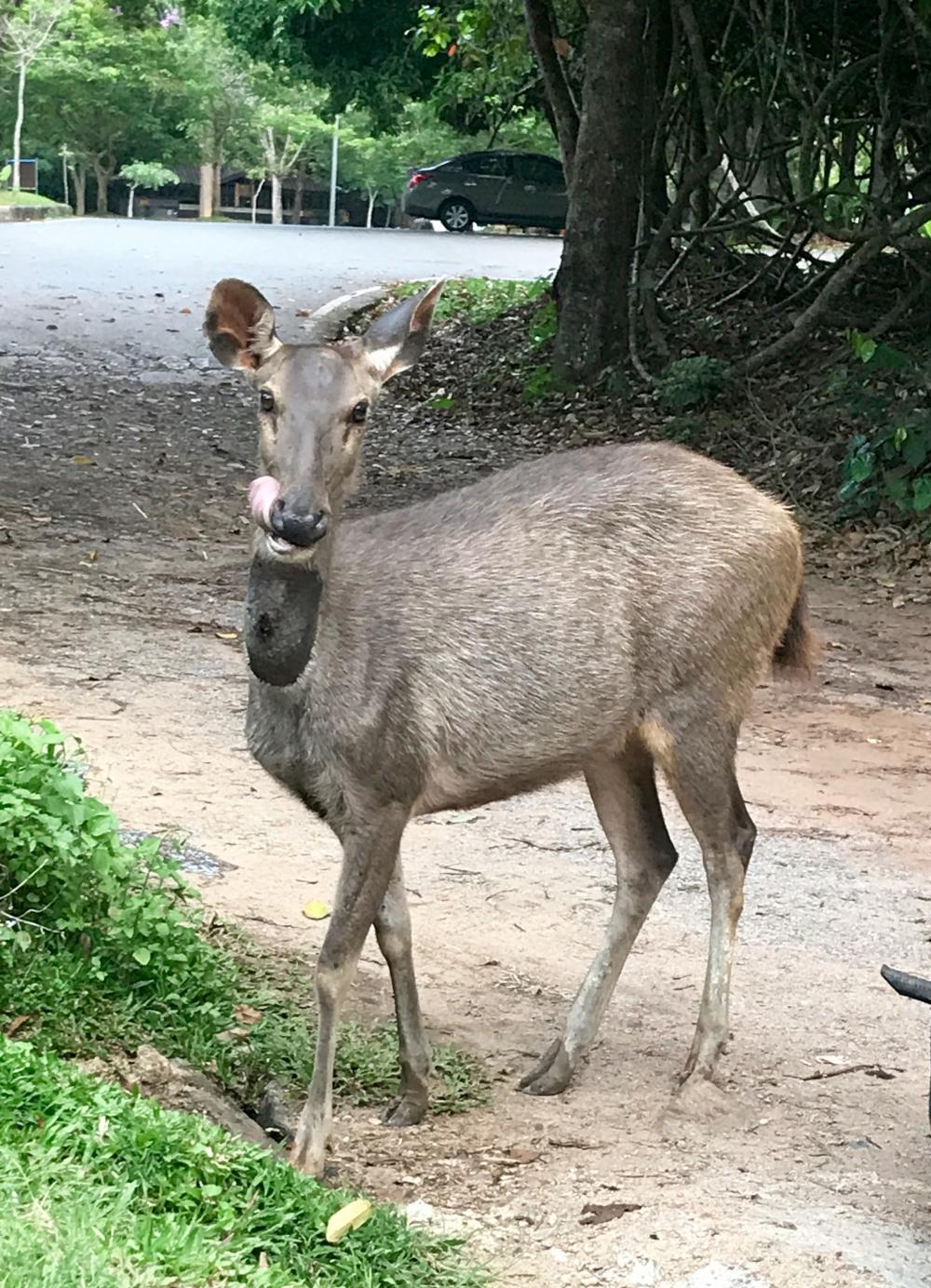 A female sambar walks near the canteen of the park during the late evening. At night, we also spotted two porcupines near the park's food court. Photos: Karnjana Karnjanatawe

To know what they eat, the team created a map of trees. They applied the methodology of the Forest Global Earth Observatory (ForestGeo), formerly known as the Centre for Tropical Forest Science, of the Smithsonian Tropical Research Institute. The ForestGeo is a global network of forest research sites and scientists. They monitor the growth and survival of about 6 million trees and almost 13,000 species in 67 forest research sites worldwide, including four in Thailand. One is Mo Singto and the other three are located in Doi Inthanon in the North, Khao Chong forest in the South, and Thung Yai Naresuan-Huai Kha Khaeng Wildlife Sanctuary in the West.

After surveying the forest plot of Mo Singto, the research team created a grid of 20m by 20m squares and put markers on the forest ground. They mapped every tree with a size of at least 1cm in diameter, identified the types and species, and attached a numbered aluminium tag to every tree. 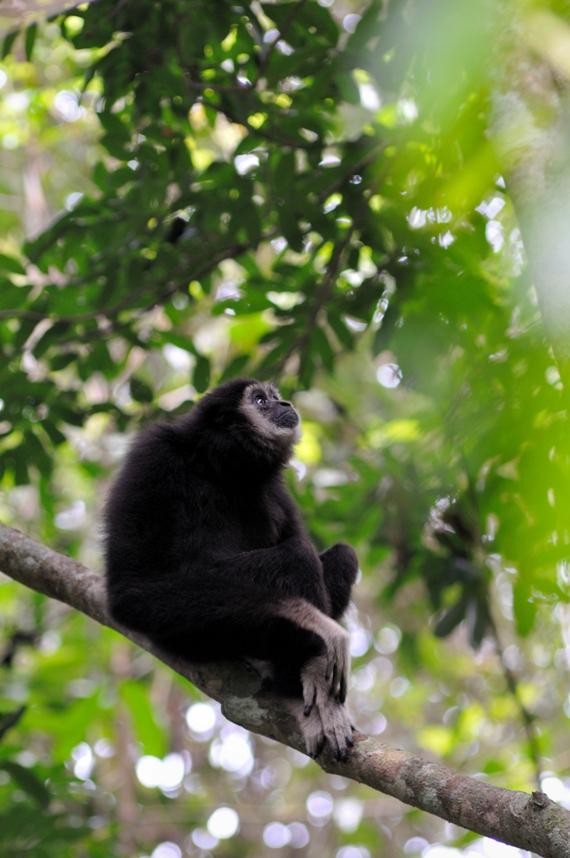 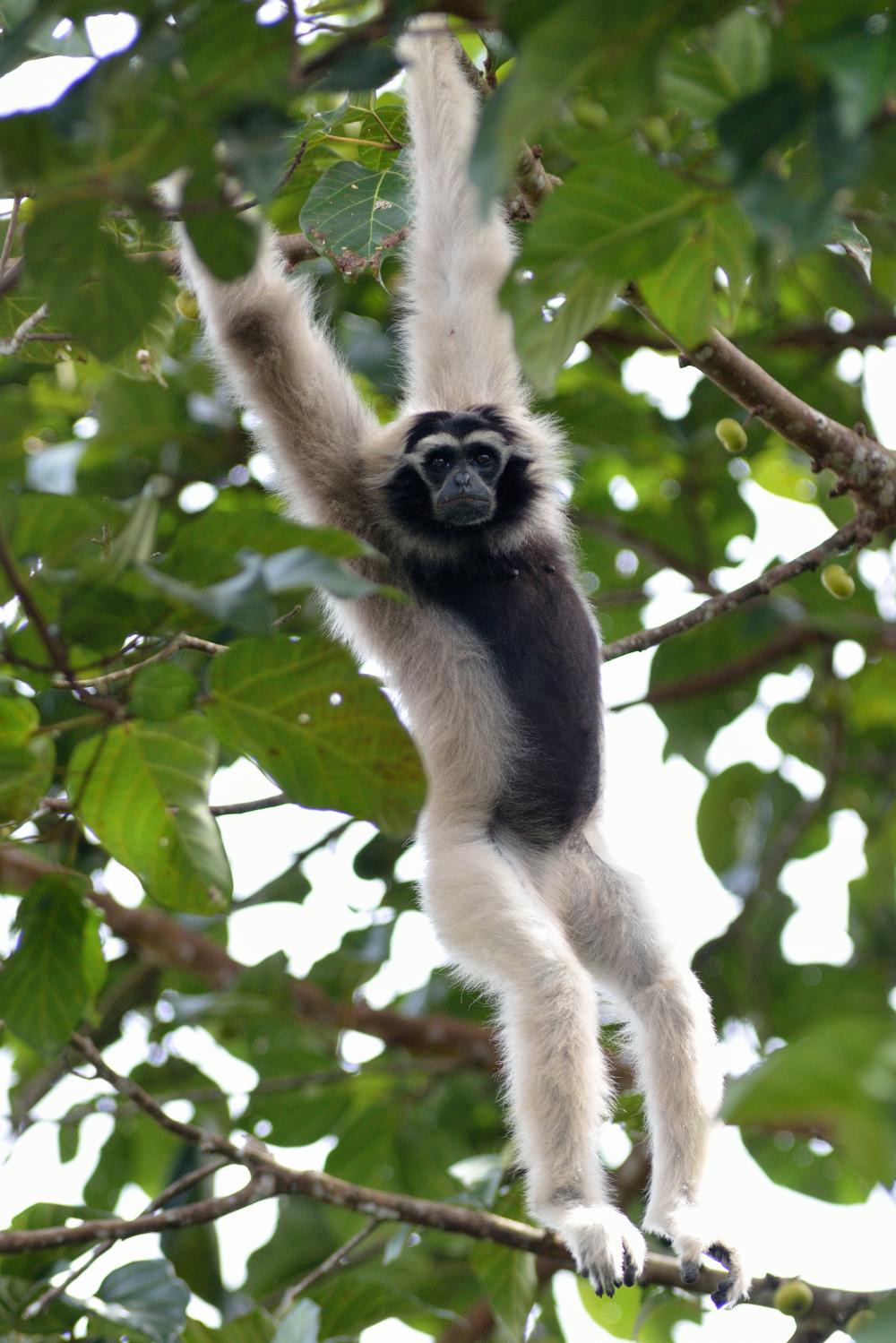 Khao Yai National Park is home to two types of gibbon, the white-handed and pileated. The fur of the white-handed gibbons for both male and female can vary from sandy, light-brown to dark-brown and black. The fur of the male pileated gibbon is all black, except for a white border around the face, hands and feet. Adult female pileated gibbons have pale brown fur with black patches on the chest and crown. Photos: Kulpat Saralamba

It took the team five years to finish making the treemap. They found about 130,000 woody trees and shrubs of 264 species. In 2000, the research team started following a family of gibbons. They call them Group A. During that year, the group had four members.

The gibbons are monogamous and territorial. Typically, one group consists of a male and female pair and a young offspring. If one group has more than two adults, it means the offspring is in early adulthood and will be ready to separate from the family to have their own when it is around 10 years old. The lifespan of the gibbons is about 40 years.

"The gibbons live in the trees and rarely come down to the ground. They brachiate from one branch to another very quickly," she said.

The team observed trees where the gibbons sleep, eat and defecate. When one gibbon left the sleeping tree after dawn breaks, the team followed the primate to record all activities. They studied the faeces to know the types of fruits that the gibbon had eaten and counted the number of seeds. They marked the spot where the seeds were dropped and revisited the place every month to check if there were new seedlings.

"The gibbons like wild rambutan, which has juicy sour-sweet pulp," she said, adding that during the ripe season, from late April until May, the gibbon family dispersed 3,206 seeds in their home range in 2007, and another 3,143 seeds in 2009. The gibbons can carry seeds far from the mother trees, and that helps spread the wild rambutan seedlings in Mo Singto.

During the past 20 years, the research team came across more than 10 groups of white-handed gibbons in the national park. The Mo Singto plot, which once was a territory of Group A, is today home to another white-handed gibbon family, Group N. 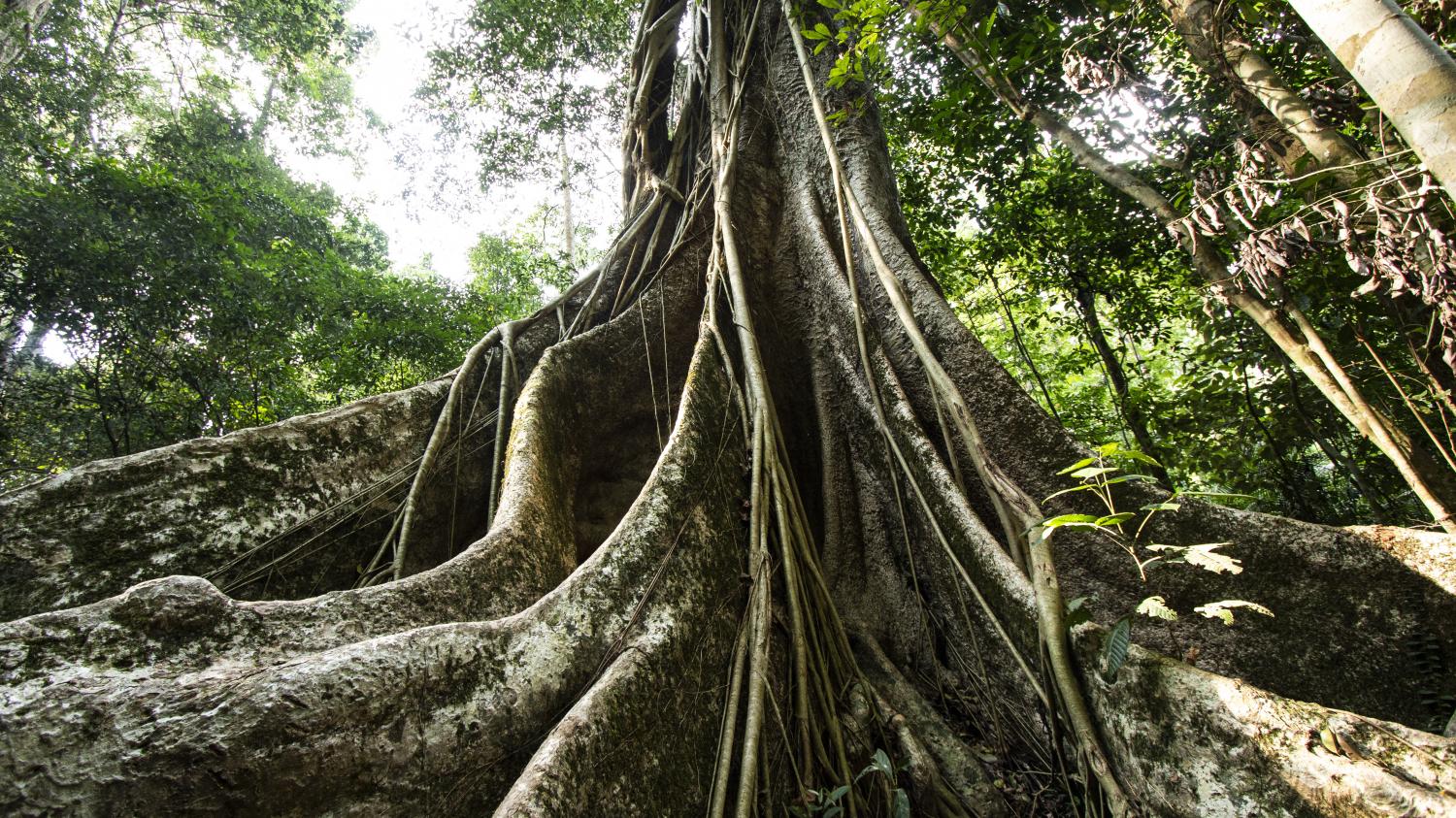 We negotiate our way to see the gibbons. Sometimes we had to walk over fallen trees. Photo: Karnjana Karnjanatawe

While we were heading to see the calling gibbon, an oriental pied hornbill flew over the treetop. We heard the whooshing sound before and after we saw the bird. The majestic bird made me forget about leeches for a while. "Wa. Wa. Wa. Hoo. Hoo. Waoo. Oo," the gibbon was still calling. Anuttara stopped and lifted her binoculars to search for the gibbon. When I looked up, I could see only dense green leaves and branches of trees. All of a sudden, treetops trembled. One gibbon swung itself from branch to branch. Then I saw another gibbon sitting on the branch of another tree. It was the one who'd made the call.

It is the nature of gibbons to call during morning to defend their territory, and normally the male and female will call as a pair, which is known as singing duets.

"The sitting gibbon is male. It is the A Alpha from Group A while the moving one is from Group N. It is younger and trying to chase away the old gibbon. The territories of Group A and Group N now overlap," she said. 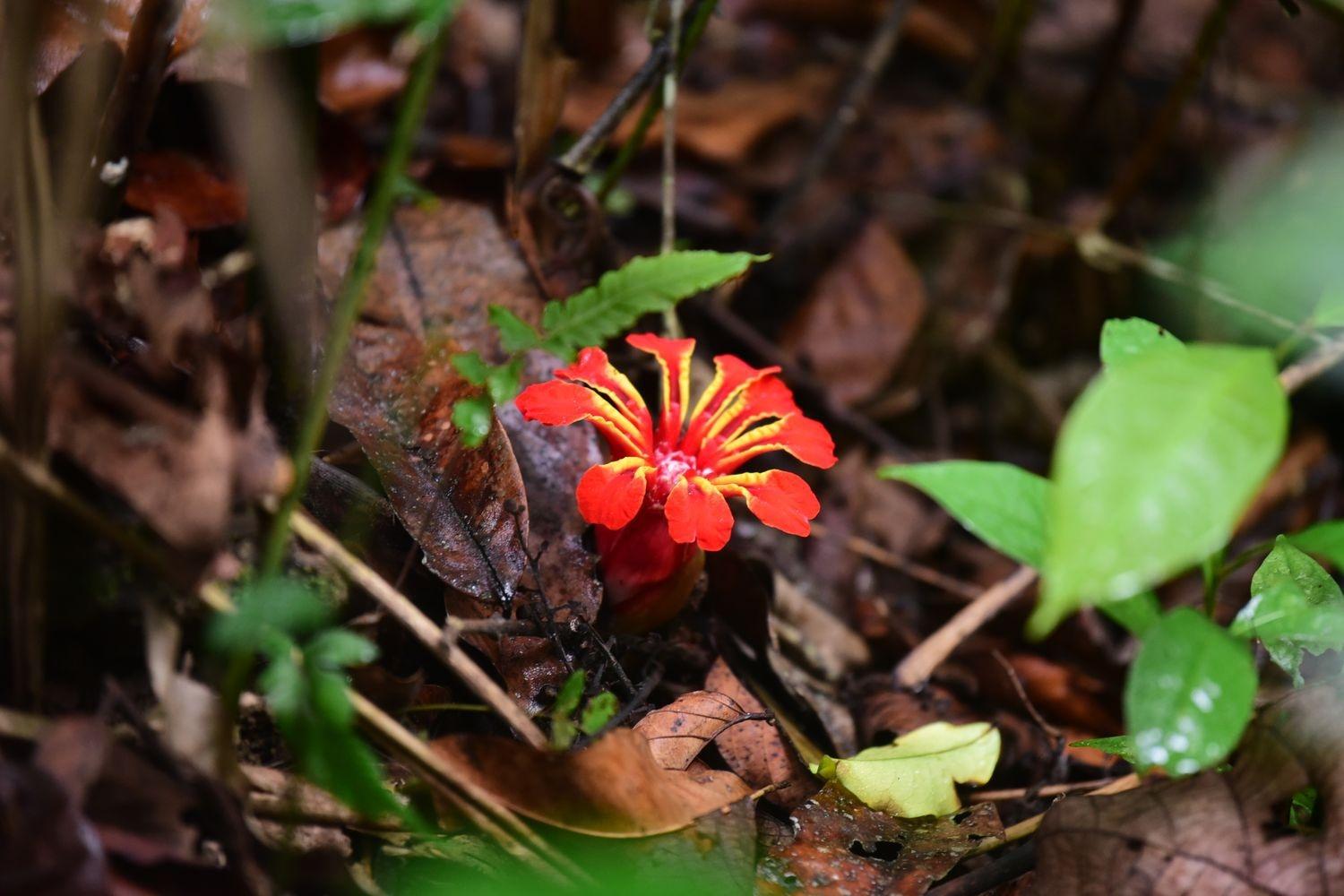 Flowers bloom during the rainy season. We also spotted various types of creepers and mushrooms, and heard birds chirping along the way. Photos courtesy of The National Science and Technology Development Agency (NSTDA)

In addition to the trek in the Mo Singto area, visitors can try a nature study trail to a panoramic viewpoint at Pha Diao Dai cliff. The park made a durable wooden path for visitors to enjoy a leisurely walk from start to the finish. The loop can take about 30 minutes. However, during the rainy season, the park closes access to the trail from June until the end of September to allow natural restoration. Photos: Karnjana Karnjanatawe

Just for a short while, the N gibbon disappeared. The experienced one remained sitting on a treetop and continued its calling. It looked down from the tree and saw us, so the gibbon brachiated away from the area where we stood, but still kept making hoo, waoo sounds.

I was so impressed with the wonderful experience in Mo Singto that I forgot breakfast. It was already late in the morning and my stomach made growling sounds. We left the forest with a happy heart. We said goodbye to some members of the research team. They need to stay and follow the gibbons.

"The data we have recorded is crucial to the study of biodiversity in Khao Yai National Park. We hope we can integrate more data from other parts of the Kingdom, and from other countries to gear forward the healthy ecosystem and sustainable development in the future," she added.

For tourists, the national park can arrange a trekking programme to Mo Singto. The group should be small and arranged in early morning for a better chance to see gibbons in their habitat. 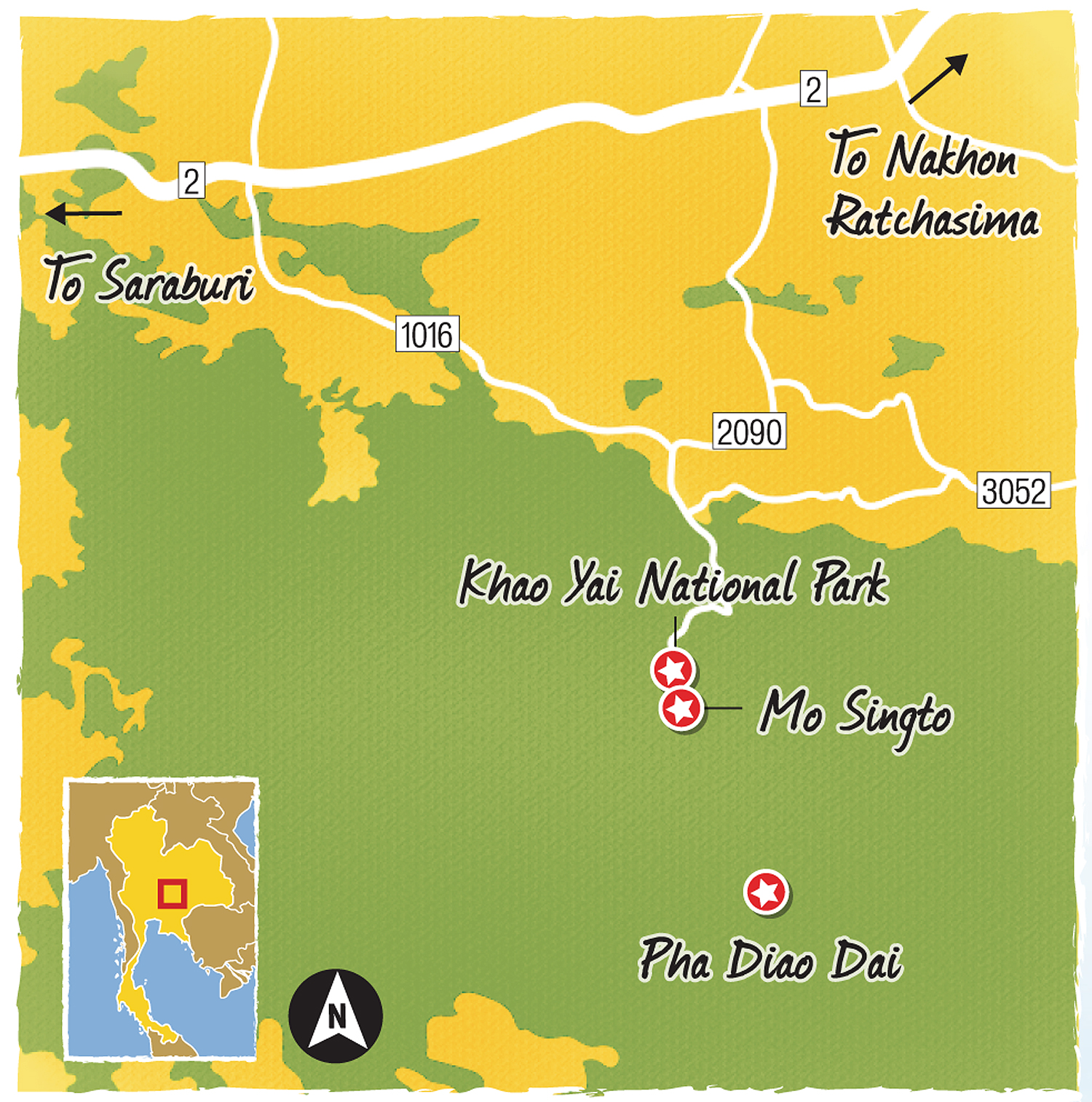