The 34th Asean Summit culminated last week with the ratification of two green initiatives that should bode well for the future of the planet. 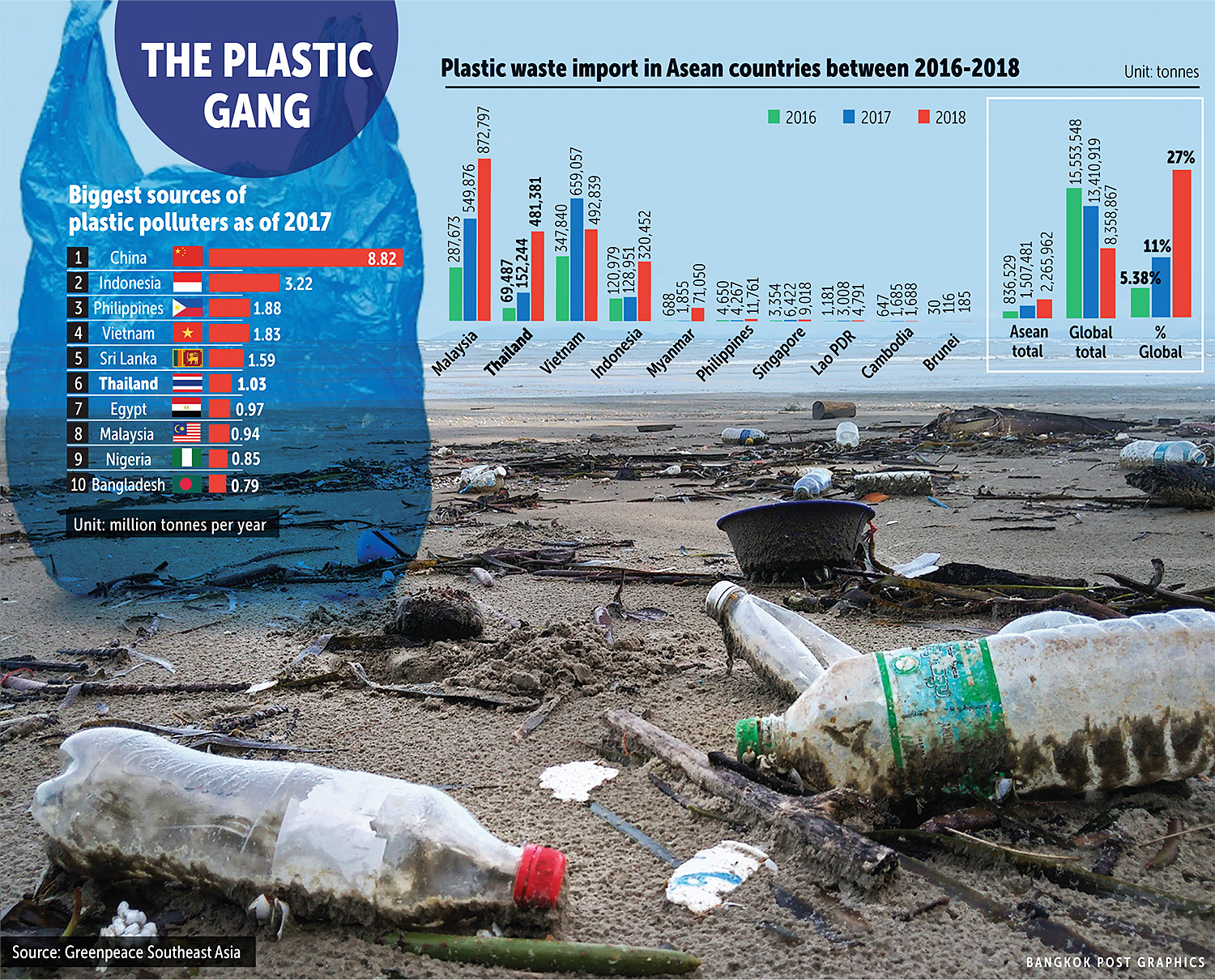 The Bangkok Declaration on Combating Marine Debris and the Asean Framework of Action on Marine Debris aim to strengthen regional cooperation to protect the marine environment. However, environmental advocates are urging all stakeholders to forbid foreign waste imports to reduce marine pollution.

"Thailand is the first country which raised the issue of marine debris in the agenda of the 34th Asean Summit last week. In fact, we made the proposal at the Asean Conference on Reducing Marine Debris in Asean Region in November of 2017. It shows our effort and commitment to tackling the growing problem of marine litter," said Jatuporn Buruspat, the head of the Department of Marine and Coastal Resources at the Ministry of Natural Resources and Environment.

Marine debris is a transboundary issue because all materials can leak into the ocean and pollute the marine environment, he said.

"The government is striving to curb the waste trade. The ban on foreign plastic waste imports will take effect in 2021," he said.

"We produce and use a lot of plastic in our daily lives. Moreover, Thailand is a country with coastal zones. Its proximity [to the coast] increases the likelihood of plastic being dumped into the ocean," he said.

According to the Pollution Control Department, Thailand generates more than two million tonnes of plastic waste annually. The 2017 Greenpeace report shows Thailand ranks as the sixth largest source of plastic pollution in the world, with about 1.03 million tonnes per year. Five out of 10 of the countries on that list are Asean nations, namely Indonesia, the Philippines, Vietnam, and Malaysia.

The endorsement of two green documents will hopefully yield good outcomes, Mr Jatuporn said, adding Asean leaders are scheduled to discuss the implementation of their policies at the Asean Senior Officials on the Environment (Asoen) in July. "We will follow up on how each signatory is taking action on marine pollution," he said.

Thailand also raised the possibility of establishing a mainland marine pollution centre with Japan at the G20 Summit. The monitoring centre in Thailand will complement the one in Indonesia, he said.

Mr Jatuporn said a slew of campaigns are in place for reducing plastic pollution.

"The cabinet approved the 2018-2030 Plastic Waste Management Roadmap in April this year. It will phase out three types of plastic by the end of 2019 and four other types by 2022. It will use recycled plastic by 2027. We cannot immediately ban the use of plastic because time is needed for business operators to adapt and find alternative materials," he said.

Tara Buakamsri, the country director of Greenpeace Southeast Asia said the ratification of the two initiatives might fail to properly address foreign waste imports. "If imported plastic waste is not treated carefully, it could leak into the ocean when rain or floods occur. We can no longer identify whether it comes from land or sea-based activities. They end up as marine debris," he warned.

Mr Tara said imported plastic waste cannot be recycled because it is contaminated and unwanted.

"These plastic scraps include nappies, snack bags, and milk cartons. They are shipped via containers from primary countries to dumping grounds in Southeast Asia," he told the Bangkok Post.

According to the 2019 Greenpeace report, the total amount of imported plastic trash between 2016 and 2018 rises from 836,529 tonnes to 2,265,962 tonnes. Top exporters of plastic waste to Asean include Japan, Hong Kong, the United States, Australia, and China.

Mr Tara drew attention to the fact that top exporters of plastic waste are developed nations with efficient waste management systems. "For instance, Japan exported 173,371 tonnes of plastic waste to Thailand last year. Although it is efficient at waste treatment, it cannot handle excess plastic garbage. It shows the correlation between consumer culture and waste generation," he said.

Mr Tara said plastic waste is sent to Southeast Asian countries due to lower costs of waste treatment. "It is cheaper to discharge unwanted plastic waste than treat it in their own countries," he said.

"Exporters are finding new dumpsites. As a result, more and more plastic waste is being shipped to Asean countries. When the Port Authority of Thailand or the Customs Department opens containers and finds contaminated plastic waste instead of recyclable plastic, they can't do anything about it," he said.

Mr Tara said the loophole in the Basel Convention on the Control of Transboundary Movements of Hazardous Wastes and Their Disposal allows for the transfer of hazardous plastic waste under the guise of recyclable plastic. "The Basel Convention takes note of the issue and proposes an amendment to close the legal loophole. However, we need more countries to join hands and endorse the Basel Ban Amendment, which will forbid the export of plastic and electronic waste to developing countries. Primary countries will be required to demonstrate lists of materials prior to transferal," he said.

Meanwhile, Penchom Saetang, the director of the Ecological Alert and Recovery Thailand (Earth), said waste recycling factories have sprouted in Chon Buri, Chachoengsao, Ratchaburi, and Phetchaburi since 2015. "Chinese investors are owners or stakeholders in the business. It is worth noting that the surge follows China's ban on plastic waste imports," she said.

Ms Penchom agrees with Mr Tara on the possibility that plastic waste may leak if it is not treated properly. "Plastic chemicals can seep into underground water and other water sources," she said.

Thon Thamrongnawasawat, deputy dean of the Faculty of Fisheries at Kasetsart University, stressed the impact of plastic waste on the environment.

"Marine animals are suffering from marine debris. Abandoned fishing equipment can hurt them. Floating plastic can also strangle or choke them if they mistake it for food," said the marine biologist.

Dr Thon noted some marine creatures can free themselves from plastic but they get sick and die afterwards. "These cases remain unknown. We cannot carry out thorough investigations into every case of marine animal deaths," he said.

"Marine debris can affect our ecosystem. Floating plastic is a small part. Most plastic sinks and covers the ocean bed. It can cut and destroy coral reefs. It also kills a large number of small animals and goes unknown. People only know about large marine animal deaths," he said.

Plastic which enters the food chain can also affect the health of human beings. "When plastic disintegrates into micro or nano plastics and enters marine animals, it becomes our food. There are diseases caused by small plastic that remain unknown," he said.

The deputy dean criticised the waste management system and people for not taking marine pollution seriously.

"As litter comes from land-based activities, our waste management system is not efficient enough to handle the deluge of unwanted plastic waste," he said.

"It piles up and leaks into the ocean when rain or floods occur. Another reason is our public awareness.

"People who use plastic bags are not willing to change their behaviour."