Revving up for danger

Big talk: Members of a big bike club meet up for a chat. The group also organises safe riding practice sessions in an open space under the expressway in Bangkok. (Photos by Pattarapong Chatpattarasill)

The crash involving a big bike that was driven by a 13-year-old boy and injured two people in Chiang Mai last weekend has set alarm bells ringing about the dangers of powerful motorcycles on public roads, particularly of those in the hands of careless riders.

On July 7, a boy's 1,000cc Kawasaki bike rammed into a motorcycle that an elderly couple was riding in front of the Sri Arun plaza market in San Kamphaeng district, causing the boy's bike to slide down the road and hit another motorcycle.

The boy sustained severe injuries to his foot and the couple came out slightly injured.

The case sparked criticism of the boy's parents, and raised questions as to why they allowed their son to ride such a powerful bike despite the fact that he does not have a driver's licence.

Some reports also emerged that the couple suddenly cut in front of the boy's bike. An investigation into the accident is currently underway.

The incident also highlighted the careless driving practices that can be seen on roads all over Thailand, prompting the Bangkok Post to look into the matter.

A volunteer emergency response worker in Bangkok said most of the accidents involving big bikes were the result of other vehicles miscalculating the big bikes' speeds.

"With big bikes reaching unusually high speeds, many motorists often misjudge when the bikes are about to overtake them," said the volunteer, who wishes to remain anonymous. 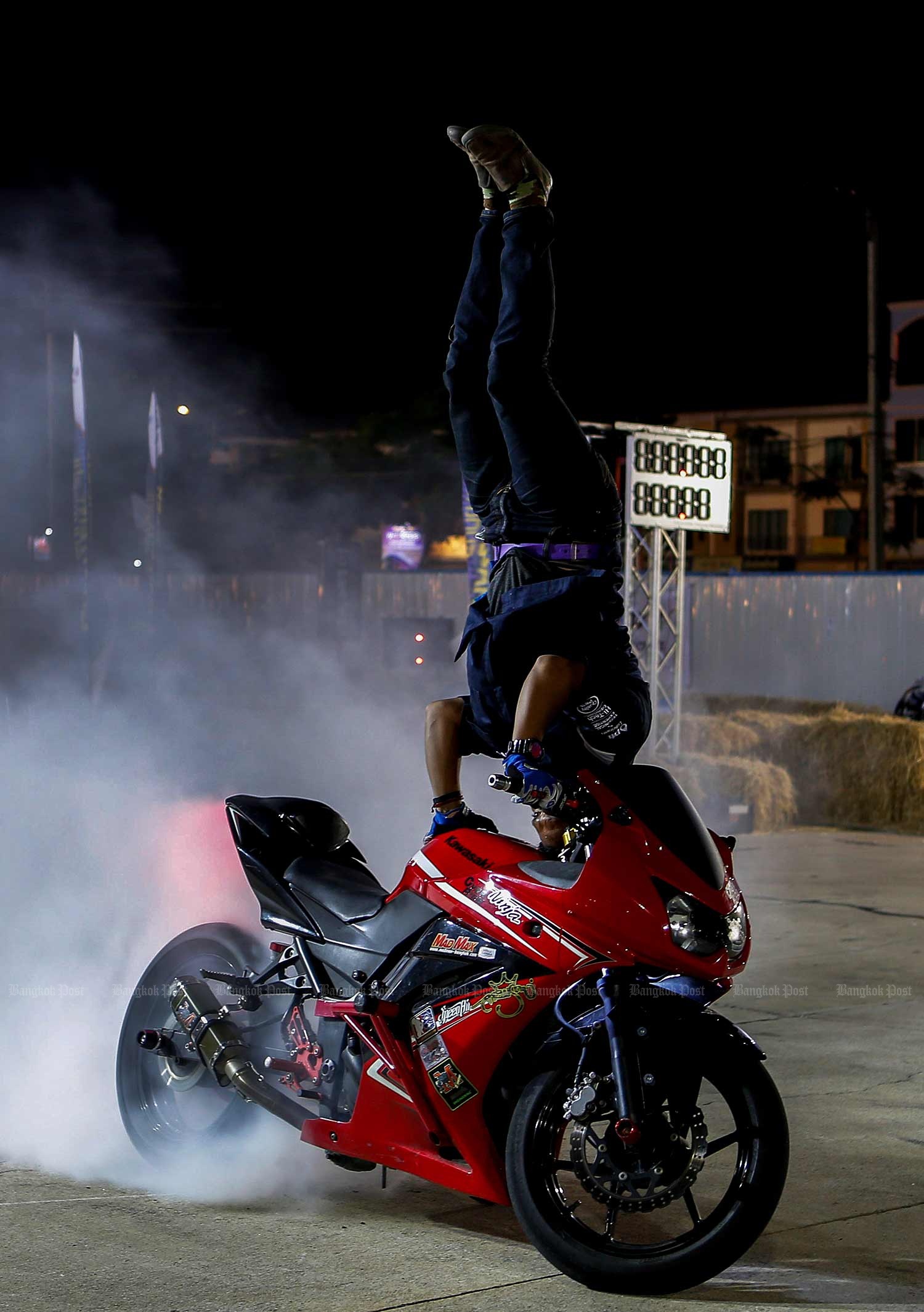 Pulling a stunt: A big bike rider drives while performing a handstand. The growing number of accidents involving big bikes has prompted authorities to consider redefining the vehicles under the law and subjecting riders to stricter licensing procedures in order to increase road safety.

In provinces, local people are generally only accustomed to the normal speeds of vehicles in their areas. Many local villagers regularly drive in opposite lanes or suddenly change lanes without awareness of the vehicles behind them, according to the volunteer.

Wanlop Sornngam, chief of the Land Transport Safety Bureau, said a recent cabinet meeting gave the green-light to a ministerial regulation that would separate driving licences for big bikes from those of ordinary motorcycles.

The regulation is likely to be implemented late next year, Mr Wanlop told the Bangkok Post.

He said big bike drivers must undertake training on how to apply brakes, accelerate and engage with curbs -- techniques that require a different skillset from riding an ordinary motorcycle.

Meanwhile, the Transport Ministry is set to ask the Education Ministry to include traffic norms and road etiquette in the driver's education curriculum, so as to instill youth with a greater sense of road safety awareness.

Former transport minister Arkhom Termpittayapaisith said ministry officials have been visiting schools to organise training sessions and issue driving licences to students aged 15-17 who ride motorcycles. He added that more than 90% of them have passed the tests.

"The Office of the Basic Education Commission has drafted budget plans for the scheme in 76 provinces," said Mr Arkhom.

Despite speed limits of 90 kilometres per hour on streets and roads, and 120kph on motorways, motorists often hit speeds of more than 100km per hour across the board.

Some even use covers to hide their licence plates from speed detection cameras. According to the Department of Land Transport (DLT), most of the traffic deaths in Thailand involve motorcycles.

Of those registered motorcycles, 167,000 of them were big bikes as of July 31 last year. The department's study also found that unlicensed drivers are two times more likely to be killed in road accidents than licensed ones.

Over the past four or five years, more than 1,000 people aged 15 or below lost their lives in road accidents and half of them drove motorcycles, the DLT said.

The boy, he said, drove at speeds of more than 140kph despite the fact the speed limits in the community areas are capped at 80kph.

"Regarding when the couple's motorcycle cut in front of the boy, I think it's more common for bikers to accelerate rather than change directions, because they would have more of a chance to survive," Mr Sarayut said.

He said the boy's father should be held accountable because he supported his son's decision to drive the big bike on public roads without licences.

The father also claimed that the boy had joined bike races with a 1,000cc motorcycle before, he said.

The boy's father, 55-year-old Suwit Thepakhan, apologised to the public for letting the incident take place, saying that he wanted to take responsibility for everything that occurred.

"It's like winning the first-prize lottery that my son is not severely injured," he said.

"This is a valuable lesson for my son and I. He told me that he will give up riding big bikes for the rest of his life, and that he will sell the other three big bikes that are parked at our home," Mr Suwit said.

He said his son's left ankle was broken and that he had a wound on his left foot.

He added that his son is now being admitted to Maharaj Nakhon Chiang Mai Hospital and will suspend his studies this term to receive treatment.

Mr Suwit said he met police and the elderly couple on July 10.

He added that police told him that once his son is discharged from the hospital, he will face charges of careless driving causing injury to other people, property damage, driving more than 90km over the speed limit and driving without a licence.

He said that he, as the father, would also face charges under the Child Protection Act for not properly caring for his son.

Supalak Suyanont, 60, who was hit by the boy's big bike, said she wants to see the case closed and is happy that the boy's father took responsibility for the damages.

By this year, the DLT aims to roll out a penalty point system to deal with traffic offences, a system which is used in many other countries, including Japan.

Through the system, each driver would receive 12 points each year. If all of the points are deducted, drivers would have their licences suspended for 90 days.

If drivers receive three suspensions, drivers would have their licences suspended for one year, after which they can drive again.

In this case, if all 12 of their points are deducted again, their licences would be suspended for a period of three years.

As for drivers who do not lose all 12 points in one year, their deducted points would be brought back the following year.