Migrants in the sex industry make higher wages, but with more at stake

TALKING SHOP: Members of the Can Do Bar collective, an entirely sex worker-run and -operated establishment in Muang district of Chiang Mai, sit outside.

Mai Janta, 29, came to Thailand from Shan State with her family when she was a year old. Her brother had been conscripted to the Myanmar army and her family feared that he would never return if he had to join.

"They knew if they took him to be a soldier, he would never come home," she says. The memory of her uncle was still fresh in their minds when they left -- She says he had joined before her brother was conscripted, and was left to die after he hurt his leg. She's been helping support her family since she was 10 years old, when she started her first job.

It wasn't until her mid-twenties that she started working in a go-go bar, where she earned more cash than any other job she had held before. Before that, she worked in childcare, cleaning, and even food service. She worked at a bakery, too, which she hated.

From the northern border karaoke bars to the streets of Bangkok's Nana Plaza, the entertainment and sex industry's strong presence in the Land of Smiles isn't hard to miss.

According to the 2019 Thailand Migration Report issued by the UN-funded International Organisation for Migration, it's estimated that there are about 300,000 sex workers in Thailand.

But not all of those workers are Thai nationals. Thailand is a regional hub for migrant workers, and the sex industry is no exception to that. The industry comprises women who come from surrounding countries, namely Myanmar, Laos, Cambodia and Vietnam, to work and make at least double -- and sometimes 10 times as much -- the minimum daily wage of 325 baht, or almost US$11.

But it's not just the prospect of more cash for themselves that brings women into the trade, it's the prospect of being able to take care of their families while hopefully saving something on the side.

For Mai, the extra cash from her go-go bar work allows her to support her father while supplementing the income of her older brother, who has a new baby, as well as her younger brother who is starting a fruit stall business. She is also able to lend some financial assistance to her two aunts in case of emergencies.

A sex worker in Thailand might make in a few hours what a construction worker makes in a few days, says Liz Hilton, the director of the Empower Foundation, an NGO that assists female sex workers within Thailand.

"The guys, the migrant workers [in border areas], they have to work for about three days to be able to afford 20 minutes … so you're better off being the seller than the buyer," she says. According to Ms Hilton, 80% of sex workers are mothers. Working for 325 baht per day in Thailand just won't cut it if you have other people depending on you.

Many women, like Mai, are also supporting their parents and younger siblings, and sex work is one of the only types of work that allows unskilled labourers to make a high enough wage that allows them to save some money on the side. Mai also works at the Can Do Bar, the Empower Foundation's entirely sex worker run and operated bar.

Unlike Mai, however, many other women and workers don't come to Thailand -- either on their own or with families -- until they're of working age.

"When we talk to women from Shan State, coming to Thailand to work as a young person, not just as a woman, is a milestone in your life. Everyone will go to work in Thailand at some stage. It's just making the decision 'Is it now that I'll go or is it later?'" says Ms Hilton.

"Some will come with family or friends and those that can't will pay a little money to have someone bring them."

Oftentimes, it's only after working in other jobs that women enter the sex trade.

"Most people will be doing other jobs when they first come, then they will learn and learn until they really start sex work," she says.

The job takes training, like any other form of labour. "They have to know the business and look after themselves so they don't get ripped off," says Ms Hilton. But it's not just learning how to deal with customers that requires training. Workers have to learn other skills like dancing, putting on makeup and even dressing a certain way.

For Mai, she had to learn how to dance before working in a go-go bar.

"For a lot of women, they have never worn makeup before," says Ms Hilton. "So it starts from the very basics."

"The exceptions are if women are already doing sex work in Burma [Myanmar]," says Ms Hilton. Women who have Thai customers across the border might already have Thai language knowledge or know where to enter the trade.

"In other cases when someone [a Thai client] will go back home, they'll say okay take me home with you," says Ms Hilton.

But the work is not without risks. To be both a sex worker and a migrant means to be doubly marginalised in a place where sex work faces a grey area of regulation, establishments wishing to employ migrants must work around strict laws and documentation, and entertainment industry work is met with a strong societal stigma.

According to Mai, there is increasing pressure on employers to comply with migrant registration requirements so there are several entertainment centres (i.e. karaoke bars and go-go bars) that aren't taking migrant workers anymore, even under the table.

Although some workers are legally employed in massage parlours, go-go bars and other entertainment centres, the regulations on hiring migrants push many to work without having all of the necessary documents. If they're netted in a police raid and don't have the proper paperwork, they run the risk of being immediately deported or placed in detention.

That deportation or extended detention means leaving their primary source of income, and in the case of women who are supporting other family members, leaving their children and relatives without a major stream of cash.

On the side of the employer, they also face significantly higher pressures than their Thai counterparts.

When these establishments that might play host to sexual arrangements hear of an impending raid or any sort of police visit, foreign workers are often the first ones to be thrown out or fired -- on the spot.

Additionally, although registered migrant workers are afforded some rights, much of that information is only available in Thai, meaning that if people don't have a written knowledge of Thai or don't have someone to thoroughly explain their rights, they may not even be aware of what those protections look like.

According to the 2019 Thailand Migration Report, some common practices that sex workers across the board may experience are "harsh wage deduction practices for lateness, weight gain, dress code infringements, minimum drinks orders and arguments with customers".

"In a lot of other industries, there's a two-tiered system, but actually in the sex industry you're both treated equally badly," says Ms Hilton. "We have equally bad situations."

Even if they are aware of the law, however, making use of the labour protections that some are technically afforded can be extremely risky. Most of the time, complaints go unheard and put the worker's legal status as well as employment at stake.

"Nobody is really able to use the labour law. It's a big risk you're taking," says Ms Hilton. Migration issues aside, sex work falls into a uniquely grey area within the law; "entertainment centres" are legal, but having sex for cash isn't.

"Sex is your own business … it's only when you grab the one baht at the end of it. Then you broke the law," she says. 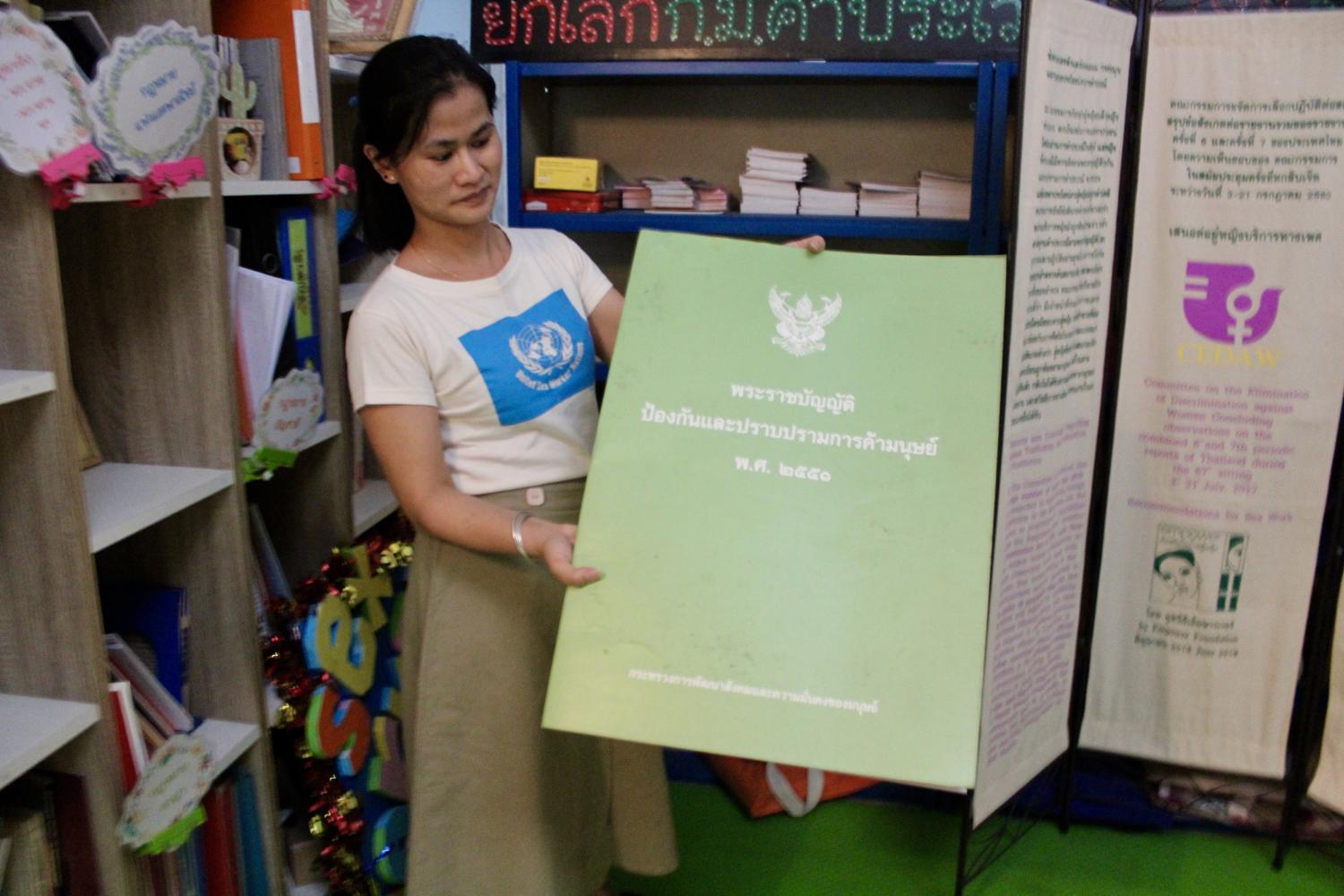 THE RULE BOOK: Mai Janta holds up a large copy of the Anti-Human Trafficking Act.

"The biggest problem is people deciding that we are bad women or that we're victims when they haven't even met any of us," she says. The societal perspective of her work affects everything from her healthcare to her personal relationships. Most of her friends outside of her work don't know that she is a sex worker, and she prefers to keep it that way.

"Why would I tell my friends that I'm a sex worker if I'm just going to be looked down on?" she says, adding that it's particularly taboo in the Tai Yai (Shan) community, she says.

"And when I go to the government health clinic, they give me a different coloured card from women who aren't sex workers. There's a different room and a whole different process."

However, the stigma doesn't just stem from moralistic standards, but also from a conflation with human trafficking, according to Ms Hilton. While trafficking does exist in the sex industry, to a great extent, most workers are consensually in the business.

"I think the old days are really gone," says Ms Hilton. "Tomorrow you might see in the newspaper or in the news that something will happen, but it's now the exception and not the rule."

"Up until about 1998 there were the stories of women coming to Thailand and being locked in brothels without anything -- debt bondage without any language," she says. "There was, and it was real, but they're gone. That time is well past."

Ms Hilton attributes that to a greater ease of electronic communication through cell phones, legal changes that have made it more difficult for illegal brothel owners to operate, and the spread of word-of-mouth knowledge within communities.

Officers with the Anti-Trafficking in Persons Division (ATPD) of the Royal Thai Police agree that the face of sex work in Thailand has changed. "There are very few prostitutes in Thailand that are actually trafficked," says Pol Col Thakoon Nimsomboon, the deputy superintendent of the division and head of operations at the Thailand Internet Crimes Against Children Task Force.

Pol Col Thakoon believes that the decrease in sex trafficking seen in the last decades is also a result of greater legal pressure put on entertainment centre owners to comply with the law, lest they are arrested themselves or have their establishments raided -- and subsequently lose all or most of their workers.

However, due to the nature of the raids and the extended periods of detention that women are subjected to, Empower and other NGOs assisting sex workers are opposed to them.

Pol Col Thakoon said that investigations can often run upwards of 90 days, and in some cases even up to a year, meaning that women may find themselves in the hands of the state for a very long time.

In the face of raids, social and legal stigma, what Mai and the women of Empower want is to be legally recognised for their occupation and have their work seen, simply, as work.

"Sex work is the one job that provides the chance to build your dreams," says Ms Hilton.