A CCTV camera is installed at the Ratchaprasong intersection, one of the city's busiest traffic junctions.

Motorists charged with irresponsible and careless driving can expect their licences to be suspended for three months, once the 2019 Road Traffic Act starts to be enforced on Sept 20.

This will be a cause for concern for motorists who are convicted of traffic violations.

Police are preparing to use a penalty point system to deal with rogue motorists and careless drivers.

The system will work in tandem with so-called "e-policing", an initiative to keep drivers' information on electronic platforms and enable police and transport officials to keep tabs on and act against wrongdoers, especially those who don't pay their traffic ticket fines.

These are the elements of the 2019 Road Traffic Act in a nutshell, according to Police Education Bureau chief Ekkarak Limsangkat.

Police nationwide will be trained on the ins and outs of the new law before Sept 20, the day the officers will be forced to abandon their long-running tradition of seizing driving licences from traffic offenders, Pol Maj Gen Ekkarak said.

It will be among the first things police do before gradually rolling out more e-policing measures.

"We'll then enter the full electronic or digital mode as quickly as possible," Pol Maj Gen Ekkarak said. He is a member of the committee to amend the old Road Traffic Act.

The committee is under the supervision of the Royal Thai Police.

Use fear as an instrument

Not only will motorists be allowed to show their e-driving licences on their smartphones when they are pulled over, but they will also see points deducted from their scores for bad driving behaviour.

The new punishment is stipulated in Section 161 of the Road Traffic Act. 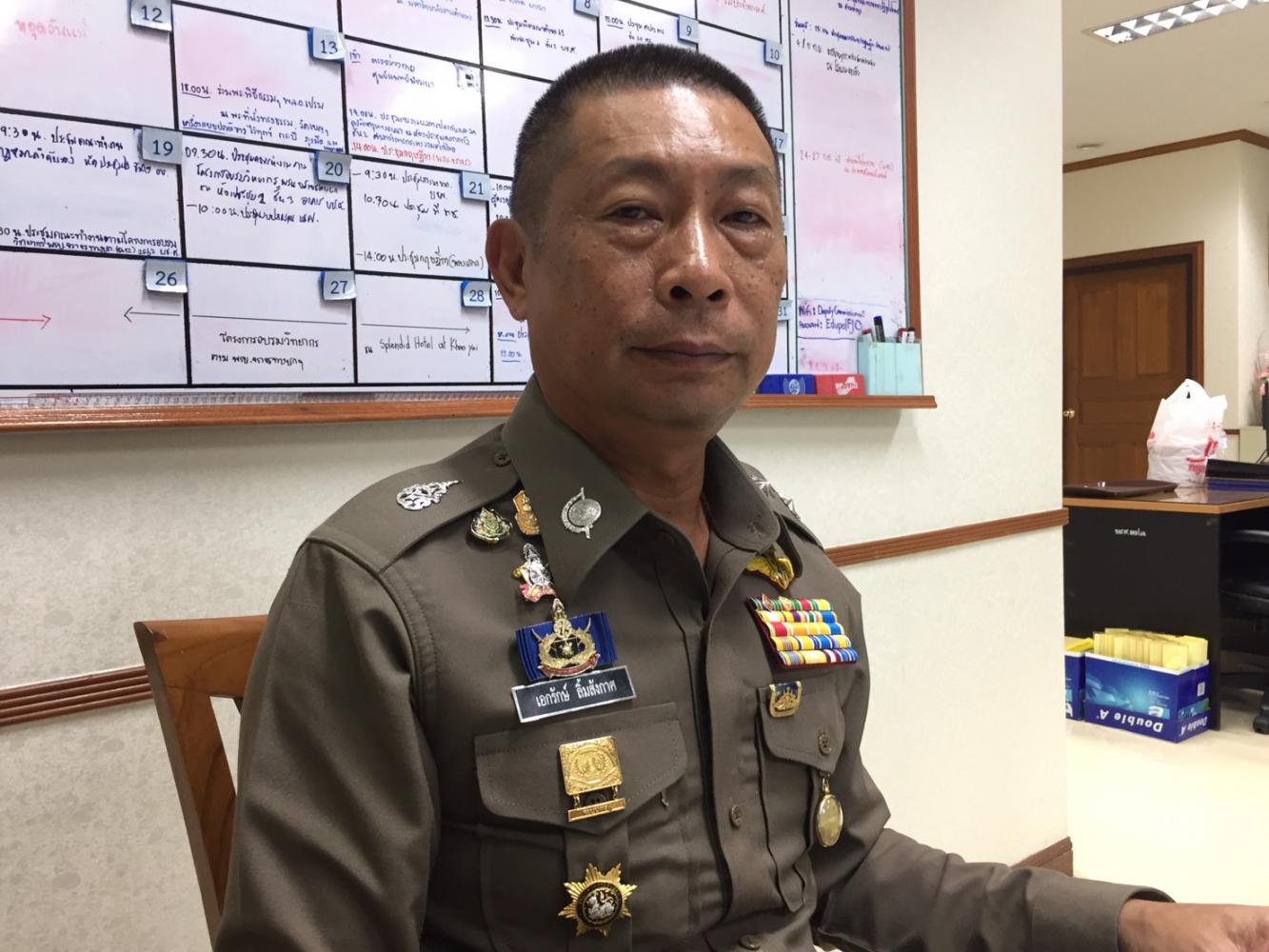 If the drivers lose all of their points, authorities will suspend their driving licences for three months. If they re-commit the violations, the suspension periods will be extended, he said.

Officers are currently working on a list of traffic offences subject to the point reductions. Public hearings will be held to allow people to share their views and add offences, particularly those related to severe accidents.

Once the new act comes into effect, the police will be given 90 days to issue organic laws, including laws on the criteria for proper driving behaviour, which must be put in place by Dec 19, according to Pol Maj Gen Ekkarak.

He said the points-deduction approach is needed as only imposing fines on wrongdoers has failed to correct their driving behaviour.

"Many people still disobey the law, which causes the number of accidents to increase," Pol Maj Gen Ekkarak said.

He believes that instead of fines, the system of issuing point deductions, a concept that was taken from Japan, will be more effective in making people comply with the laws.

The system, he says, instils the fear of poor marks in drivers, because a lower driving behaviour score could lead to a licence suspension.

This system, he says, will lead to a lower number of traffic accidents.

If the approach of issuing fines cannot effectively reduce the number of badly-behaved drivers, a psychological tactic directed at their worry, or fear over low points and a subsequent bad result should be applied to add teeth to the law.

Even the fine payments can be made more intimidating in the event that the wrongdoers neglect to pay their traffic tickets.

Section 141 (1) of the Road Traffic Act says drivers must pay the fines or see their annual car licence renewals suspended.

From Oct 1, those who have not paid their fines will only receive "temporary licences" when they try to go through the renewal process at their local land transport offices, and will be given a deadline of 30 days to clear their fines. 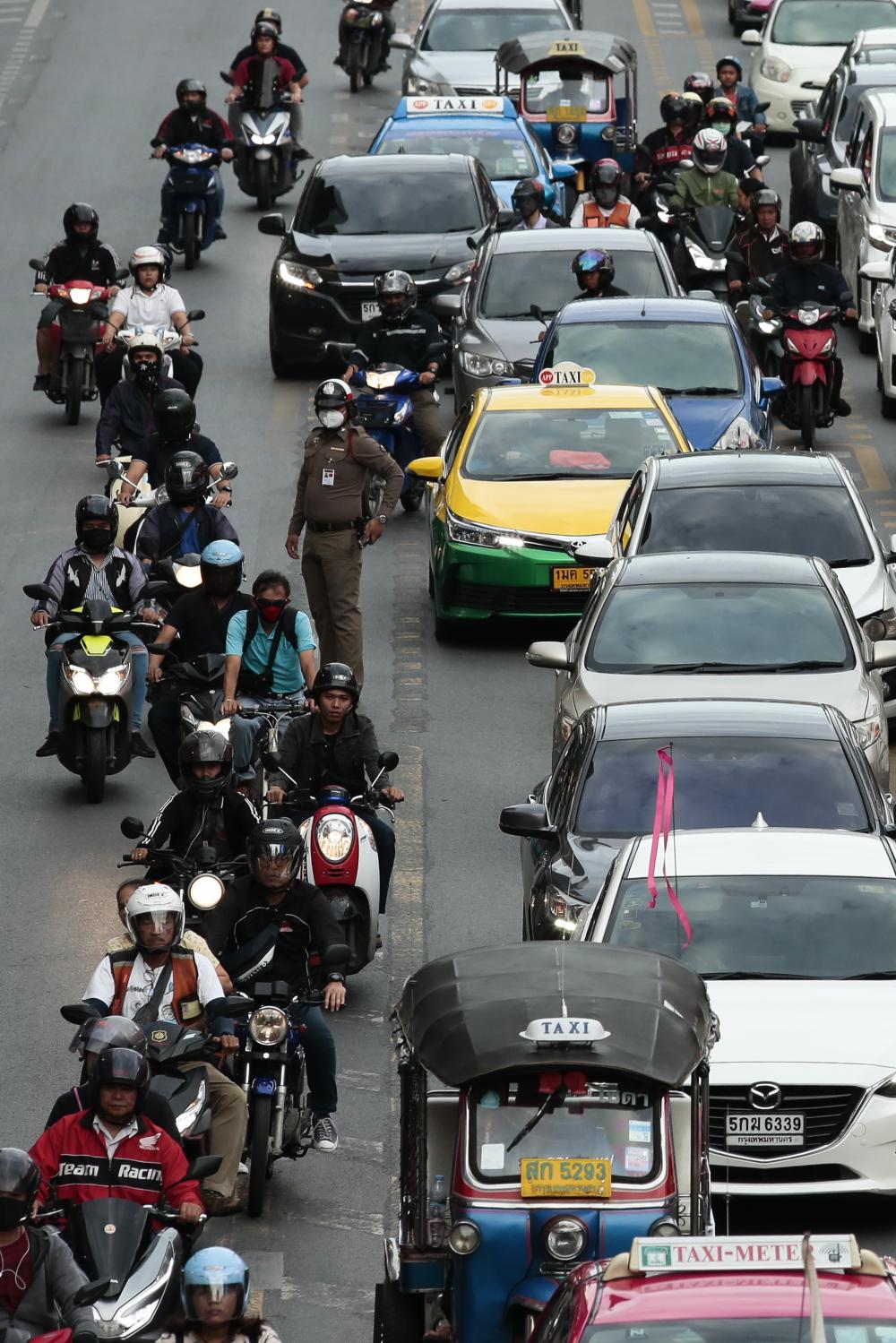 LIFE IN THE SLOW LANE: A policeman directs traffic on Ratchadamri Road outside the CentralWorld shopping complex while motorcycles weave through the congested road.

If the motorists do not want to have to worry about maintaining their driving licences, they will have to pay their fines.

The punishment of delaying licence renewals is simple to carry out, as violators' information collected by police is linked with the large database of automobile owners that is kept at the Department of Land Transport.

Previously, the measure had hardly been in practice because the data held by the two agencies was not completely synchronised.

The licence renewal delay is specifically aimed at dealing with the high number of fine defaulters, whose violations were mostly caught by surveillance cameras.

Last year, he said, police issued 11 million tickets, which were double the number issued a year earlier, but drivers only paid off 1.3 million of the tickets.

In the first half of this year, officers already issued 7 million tickets, but up to 5.9 million of them still went unpaid, he added.

Under the new regulations, traffic offenders can pay the money directly to their local land transport offices while renewing their driving licences and, in the future, "they can even pay it electronically", said Pol Maj Gen Ekkarak.

However, drivers do not need to fear these punishments if they just respect the laws, he said.

The use of virtual licences marks the start of the authorities' efforts to digitise their legal actions.

When more jobs can be done on electronic platforms, it is not necessary for police to seize driving licences from wrongdoers, as it will burden those who are in many cases required to follow officers to pay fines and get their cards back.

Such a practice will sink into oblivion when people start carrying electronic driving licences.

The new licences, to be used on a mobile phone-based application developed by the Department of Land Transport, not only suit a modern lifestyle, but can also serve as a way to remind motorists to pay their traffic fines.

"They can check the number of tickets issued by police," deputy permanent secretary for transport Peraphon Thawornsupacharoen said.

He said the department will attach quick response (QR) codes to each of the new driving licence cards, so owners can scan them and make the e-licences themselves on their smart phones.

Atiluck Kuanhaveth, 28, who has been riding and driving for 10 years, said he agrees with the move against fine defaulters, but suggested the police must also be kept in check.

The image of traffic police has long been tarnished by some dishonest officers, so he is not completely confident that the law will always be enforced in a fair manner.

They may not enforce the law as much on powerful people, and are also prone to abuses of power and committing other types of misconduct, Mr Atiluck said.

"What will happen if these corrupt practices still exist when the digital score deductions are applied?" Mr Atiluck asked.