A portrait of His Majesty King Bhumibol Adulyadej The Great is erected at Sanam Luang in front of the Grand Palace as the government prepares to hold a ceremony to commemorate the passing of the late King today.

It has been three years since the passing of His Majesty King Bhumibol Adulyadej The Great on Oct 13, 2016. Thais still cherish memories of their late King and his greatest legacy.

His hard work contributing to the country and his Sufficiency Economy Philosophy (SEP) are held in especially high regard. Even some young people who admit they do not normally follow events in public life say they are inspired by his example. "His legacy endures," Thais say.

Munchusa Udomvit, 45, the owner of Na Siam Gallery, said she reveres King Rama IX for the perseverance he demonstrated on his visits to rural areas.

"It is not necessary for him, as the king, to work hard. However, he never turned a blind eye to his subjects and their problems. His diligence motivates me to excel in my personal life and business," she said.

Ms Munchusa has held an exhibition of sculptures, called "Our Father Never Goes Away", for three years to commemorate each anniversary of his passing.

The exhibition near Lat Phrao 122 is open to the public free of charge until tomorrow.

Steven Muthikul Jones, 57, an artist whose sculptures have been shown at the Bangkok Art and Culture Centre, said he commends the late King's effort to improve the living standards of those in remote areas.

"Instead of handing out cash, he instructed people in the northern and northeastern parts of Thailand to get on their feet. To that end, he volunteered to prepare land and dams for locals to encourage sustainable agriculture," he said.

"Now he is gone, I understand even more how much he contributed to our country. I miss him from the bottom of my heart," she said.

"People who grew up with nightly royal news in which we saw His Majesty perform royal activities [helping the people] will understand well and keep his perseverance in mind. When we face obstacles, we will always think of those things," said the architect, who has been profiled by Time magazine as one of 15 women leading the fight against climate change.

Apisit Supakitcharoen, 38, a photographer and lecturer at the Faculty of Mass Communication, Ramkhamhaeng University, also takes the king's contribution as an inspiration.

Since Oct 20, 2016, he and his family have visited 31 provinces and five foreign countries including Malaysia and Switzerland which the king visited.

He set up a Facebook page called Tee Tee Por Pai (The Places Where the Father Visited) to share pictures with the king's admirers.

Along the way, he learned about the king's contribution and his teachings, said the lecturer, adding he is determined to keep following in the tracks of the late King.

"Lately my son said he regards 'Nai Luang' [King Rama IX] as a hero because he did so many good things'," Mr Apisit said, referring to his 5-year-old son Phopsuk.

Bhomipat Jaturabhat, 54, a former sports anchor, said he has taken inspiration from the late King in his efforts to be a good person.

"I act on his teaching in my daily life. For instance, I collect rubbish on the street and donate food to stray dogs," he said.

Meanwhile, Wora-aek Sattham, 45, a manager, recalled the time when he was a soldier who stood guard for King Rama IX.

"I revere his sacrifice and honesty. He worked tirelessly and set the best example for all of us. In a sailing race, nobody knew that he ran into a buoy.

"However, he refused to compromise his ethics and returned to the starting point. If it had been others [who were unethical], they might have cheated," he said.

"King Bhumibol's teachings abound in all areas, but the SEP is probably his most famous guiding principle," he added.

"I bear it in my mind every day. It teaches us to moderate our needs within our capacity. It discourages us from setting overambitious goals. It is a lesson that I will pass on to my children," he said.

"Have you ever seen an image of his squeezed tube of toothpaste? It shows he used resources carefully and extracted the most from them. I would like to apply the principle of moderation in my life," she said.

On the anniversary of his passing, Ms Dontree said she enjoys listening to songs in remembrance of him.

Her organisation integrates the SEP into the daily activities of locals, such as bookkeeping and waste sorting. "It is not easy as it sounds at all," she said.

Wanvisa Wattanadumrong, 41, managing director of Farmhouse Kitchen and Daughter Thai Kitchen in San Francisco, said she always shares King Bhumibol's stories as well as SEP with foreigners whenever she has a chance.

"SEP might sound anti-capitalism, but foreigners love to discuss these things, and the people here in San Francisco care about the environment. They agree that sustainable living is what we humans long for," she said.

Sivakorn Krissanasuvan, 43, a lecturer at Mahasarakham University, said the SEP could cushion the gloomy economic outlook.

"I feel an urge to follow his teaching because it encourages self-reliance. In fact, I had heard of the SEP for a long time but did not take it seriously.

"Younger generations might have not kept up with the wisdom of King Bhumibol but now we are changing," she said.

Samitanun Nutup, 23, a partnership development and marketing officer for social enterprise Socialgiver, and her siblings, say their parents, traders at Chatuchak market, always refer to the late King as an example of how to live.

"My parents always said he was in a high position as a king but he sacrificed his comfort and convenience to help others," she said.

"It's been three years already and people still commemorate his life," she said.

"I believe everyone knows what he did with his life, and the people also share the stories from one person to another, from generation to generation," she said.

She lives her life following SEP, to sustain a quality life while sharing and helping those in need. 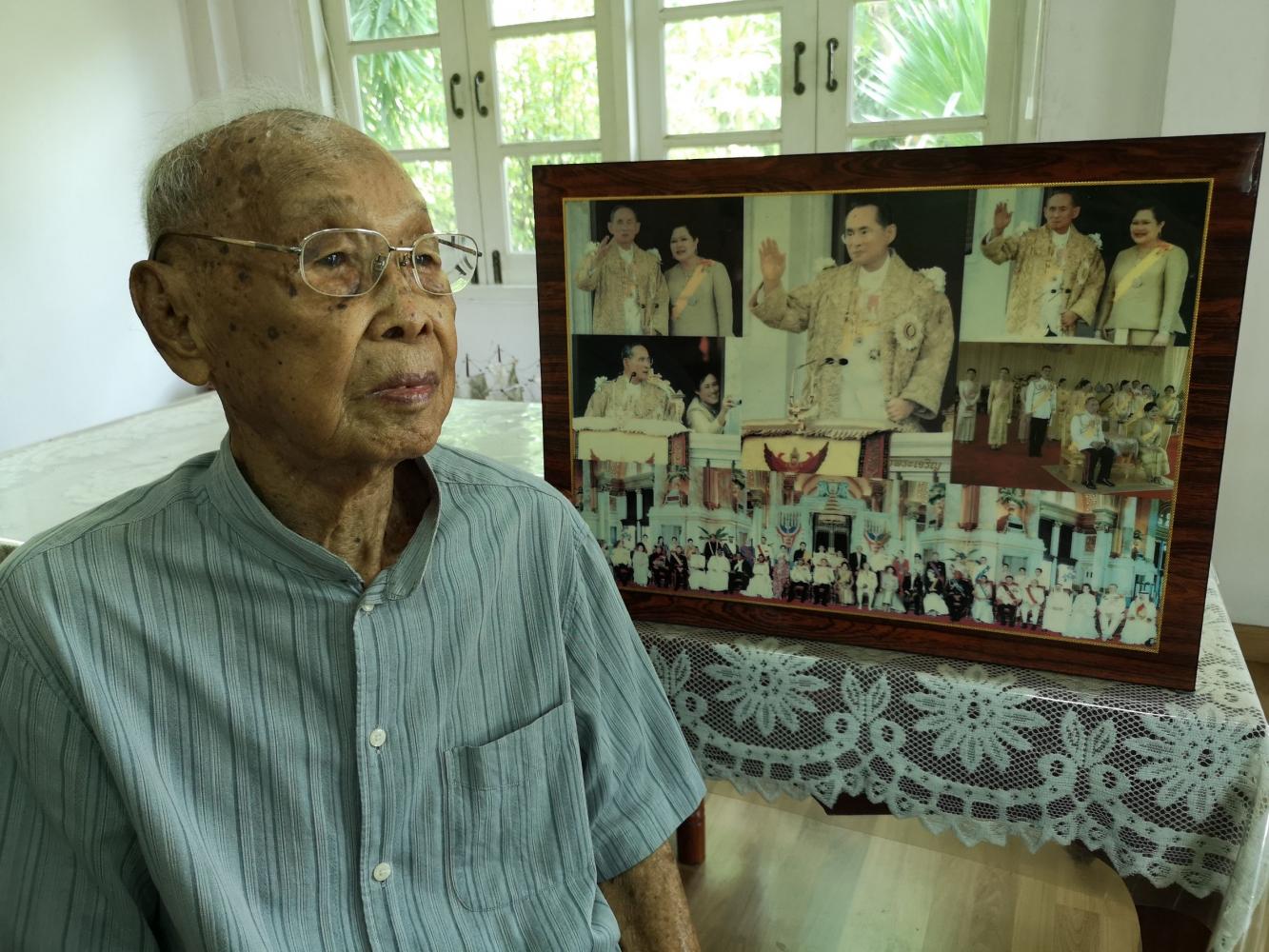 Majestic musings: Lt Gen Swang Khamasundara, 103, says he has never seen anyone contribute as much to the public good as King Rama IX did.

Swang Khamasundara, a 103-year-old retired military officer who was born in the era of King Rama VI, said he saw King Rama IX as a role model in leadership who put the public interest over personal interest and gained respect as a figure at the centre of the people's hearts.

"I don't know every detail of other kings. No matter whether others agree or not, I strongly believe he is a Maha Raja [The Great].

"I've never seen anyone contribute to the public interest as much as King Rama IX did," the former royal guard said, adding the late King taught by example.

Lt Gen Swang said he misses King Bhumibol often when he reads news about problems in the country. He thinks about him when he is lying in bed and his mind starts to wander.

"Maybe if he has not gone to Nirvana, he is an angel somewhere. I hope he is watching over us to protect problem-ridden Thailand," he said.

The gift that keeps on giving

The road to rural success