Airport plans up in air

Scuffles over expansion scheme for Suvarnabhumi are still simmering

While the Prayut Chan-o-cha government struggles to invigorate a tepid economy, it is also fuelling the slowdown by its year-long delay on a decision on the Suvarnabhumi airport upgrade.

The development is part of an aim to make Thailand an aviation hub in Southeast Asia as the number of travellers skyrockets, generating significant revenue for the country and its neighbours.

The Airports of Thailand Plc (AoT), which oversees Suvarnabhumi, was initially delighted to see a rapid increase in travellers; however the airport has since become overloaded with numbers exceeding its annual capacity of 45 million.

The number of passengers is 175,000 greater than a daily maximum limit and jet bridges have become scarce as their number are 70% fewer than flights, forcing people to take shuttle buses to their aircraft instead of simply walking through terminal gates to board.

The overcrowding has drawn complaints from passengers who have had to queue up in long lines to have their passports checked, potentially deterring future visits.

The problems come as many tourists, notably from China which is the biggest tourism market here, have begun to look for cheaper short-haul destinations such as Vietnam.

Suvarnabhumi, touted as a world-class facility upon its opening 13 years ago, lost some of its lustre when Skytrax ranked it 46th among the world's airports, which is far behind the winner, Changi Airport, in Singapore.

The situation not only harms Suvarnabhumi's competitiveness but also deals a blow to tourism which plays a major role in driving the Thai GDP.

Despite an urgent need to upgrade the airport, the AoT has made only small progress in airport expansion due to a conflict over the construction of a second terminal, a debate which has raged for months.

While the AoT wants to build the 42-billion-baht facility, also known as the airport's northern expansion, near the Bangkok-Chon Buri motorway, opponents demand it stick to the original master plan to build the new terminal to the south of the airport.

Their quarrel has grown more complex as it appears not only to focus on design and location but also sparks doubts over a hidden political agenda behind the AoT's decision.

Opponents, led by the Association of Siamese Architects, have slammed the northern expansion plan as they are not convinced it will best benefit passengers and airlines. They also suspect the project is being carried out in favour of certain private firms.

Association president Ajaphol Dusitnanond has accused the AoT of planning to increase its non-aviation revenue by conceding space in the new terminal to business operators.

"It will raise money by calling a bid to run another duty free shop," Mr Ajaphol said.

He asked why the AoT ignored the advice of state think tank, National Economic and Social Development Council, which has said it is not necessary to hasten the second terminal to the north because the government is developing U-Tapao airport, which is on the eastern coast in Rayong and will be connected with Suvarnabhumi by a high-speed rail system. 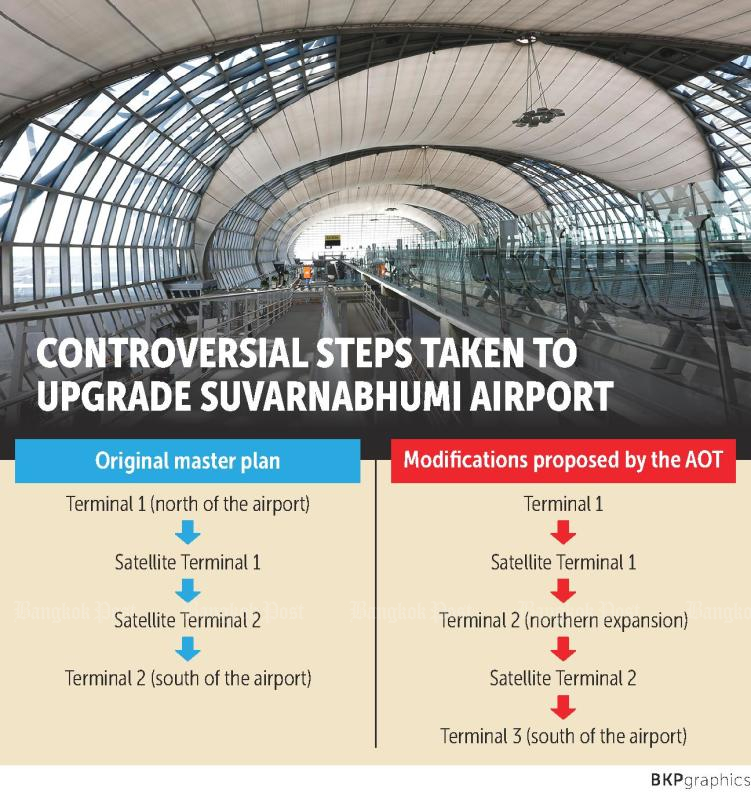 Their linkage is expected to help relieve overcrowding at Suvarnabhumi. The government is pushing ahead with its U-Tapao expansion project to serve 60 million passengers expected to visit the airport annually in the next 15 years.

Yet Transport Minister Saksayam Chidchob insists on a need for the new terminal. To further fuel the conflict, AoT has decided to adjust its master plan by building the new facility to the north of the airport.

This irks opponents, including Samart Ratchapolsitte, former deputy Bangkok governor in charge of public work and traffic, who said the new location is not appropriate due to many "technical problems".

Fourteen aircraft parking bays are planned for the terminal; however it may be hard to build more than that should the need arise.

Automated People Mover systems, or APMs, to connect the first and second terminals can easily cause confusion among travellers who need to take two elevated APM routes and the other one underground.

The northern expansion will also cause increased traffic on the motorway, prompting the need for a new expressway linking Srinakarin Road and Suvarnabhumi which will cost 37 billion baht.

However, Mr Saksayam argued that the master plan can change to match the growing demands in the aviation industry, echoing AoT president Nitinai Sirismatthakarn who said even the International Civil Aviation Organisation agrees with occasional adjustment of airport development blueprints.

The UN agency suggested the plan can be tailored every five years to suit changing conditions in the industry, Mr Nitinai said.

The AoT is not going to overhaul its master plan but only make some tweaks, he stressed.

"The southern terminal is still on our plan," Mr Nitinai said.

"We just go to the north first before ending our trip in the south."

Denying a claim the northern terminal is only built to serve retailers, Mr Nitinai said it is the passengers who will take a greater share of benefits.

They will no longer get frustrated by a long wait in front of passport checkpoints or luggage conveyor belts, and nor will they have to catch shuttle buses to the planes.

Travellers find it inconvenient to walk via jet bridges to the aircraft as 14 parking bays are adjacent to the new terminal, which are designed to serve 94 flights an hour, he said.

The northern location is also good for travel to the airport because, besides the motorway, it is connected to the Airport Rail Link, which stretches from Phaya Thai in inner Bangkok to Suvarnabhumi, and in the future, the high-speed train system linking Suvarnabhumi and Don Mueang and U-Tapao airports.

Once completed, this second terminal will accommodate 40 million more passengers a year and when combined with the existing terminal and Satellite Terminal 1, the airport will see its capacity boosted up to 115 million a year, Mr Nitinai said.

The AoT needs to speed up the construction plan because "an approval today means a wait for three or four years to use it", Mr Saksayam said.

Despite the necessity for the airport upgrade and all the benefits it will bring, critics still cast doubts.

Their main questions concern the transparency in pushing ahead with the controversial terminal.

A claim that the AoT wants to build a new commercial area for shop operators comes amid a report that King Power is a "big sponsor" of the Bhumjaithai Party, Mr Saksayam's party, in the government camp, according to observers.

Earlier this year King Power also won a right to renew its concession to run duty-free shops at Suvarnabhumi and three other airports upcountry.

It is unknown yet whether the government will give a green light to the second terminal proposal after the AoT said it has already finished its jobs.

This includes gauging the opinions of stakeholders, including global aviation organisations and travellers.