No end in sight for carnage in deep South, despite peace talks
Thailand
Special Report

No end in sight for carnage in deep South, despite peace talks

ON PATROL: Troops are deployed along the Kolok River in Narathiwat's Sungai Kolok district. The river is a natural borderline between Thailand and Malaysia.

Despite some positive signs observed in the fight to contain the southern unrest over the past 16 years, there has been little progress in the peace talks between the government and groups linked with violence in the deep South which are seen as a key mechanism in bringing the unrest to an end.

Since a weapons robbery in which 416 guns were stolen from the 4th Rattanapol Camp Development Division in Cho Airong district of Narathiwat, which marked a flare-up of the southern violence on Jan 4, 2004, a total of 7,085 people have been killed and 13,233 injured in a total of 20,512 violent incidents.

Among these victims are teachers, monks and children, both Buddhists and Muslims.

And although the number of such incidents per year is tending to decline, the degree of severity of each incident appears to rise.

Since peace talks were initiated in 2013 under the Yingluck Shinawatra administration, no significant progress was observed until Gen Aksara Kerdpol, a former army chief-of-staff, was made new leader of the talks team in 2014 after the military coup.

The new group was launched in 2015 after a session of dialogue with the Thai government in Malaysia. Arwang Yaba, a representative of BRN, was named the leader of the group.

The new session of talks also led to both sides agreeing to initiate a safety zone in Narathiwat's Cho Airong district, but this never happened.

In late 2018, Gen Udomchai Thammasaroraj, a former 4th Army commander, who replaced Gen Aksara as the negotiations leader, made his first order to scrap the project to pilot the agreed safety zone, which was to blame for an abrupt suspension of the talks in early 2019.

MARA Patani refused to speak to Gen Udomchai, saying it couldn't agree to his request to speak to the group in person rather than in the more remote format of the past.

The group also said it would wait until a new government took office after the new general election.

After the election in March, Prime Minister Prayut Chan-o-cha returned as prime minister while Gen Wanlop Rugsanaoh, a former NSC secretary-general, was appointed the new peace process head, the fourth leader in the past seven years. 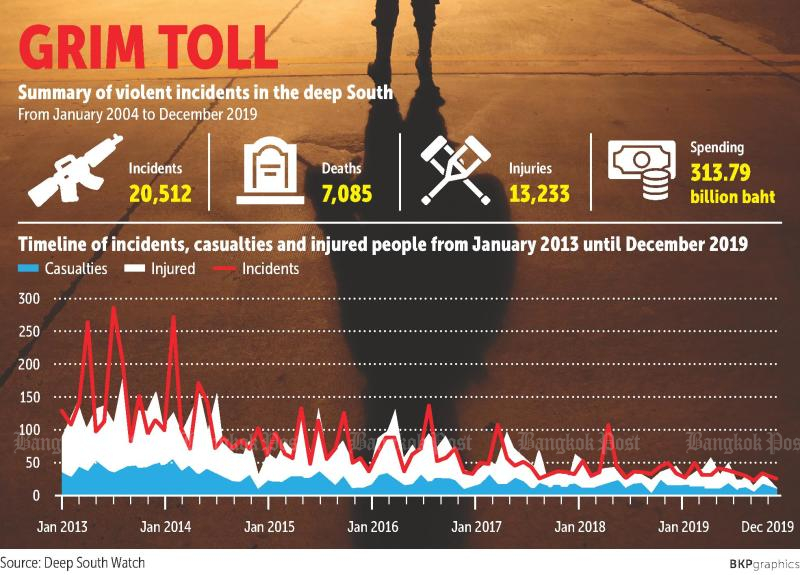 The new talks leader refused to speak to the Bangkok Post when he was asked about progress in the negotiations. His personal secretary said Gen Wanlop would stick to what he had previously told a group of international journalists in November last year.

At that time, he implied he wanted the exact sub-groups of the BRN that were active in the deep South to become a part of the peace process so the talks would progress rapidly.

"We want to speak to all sides, especially groups that are actually influencing the insurgent operations in the South," he was quoted as saying.

The peace talks team was working closely with Malaysia, the facilitator, to organise a new round of talks, while the Thai government had treated the southern peace process as a priority and included it in its 20-year national strategic plan, said Gen Wanlop in November.

And although it remains uncertain when the expected new round of talks will begin, Thai security officials are working with the Malaysia government to achieve the goal of engaging the BRN group active in the South into the new talks.

Security officials were gaining more cooperation from people living in the violence-plagued areas, he said, adding that two suspects in last year's attack on a security point in Yala were arrested because villagers had supplied information about them to the authorities.

As law enforcement efforts against these insurgents continue, Lt Gen Pornsak said, he strongly believes the peace talks process is an ideal solution to the southern insurgency.

Joint peace-building teams were deployed to work as part of the 290 tambon peace councils in the three southernmost provinces and four districts of Songkhla, he said.

Representatives from civil society are surveying the people's needs and 40% of the work has been completed. The full survey is expected to be completed by early next month.

"When we have the result, we will announce it live globally to the UN so the two million people in the three southernmost provinces will find out the latest," he said.

All eyes are now on the expected new round of talks, said Asst Prof Srisompob Jitpiromsri, director of the Centre for Conflict Studies and Cultural Diversity (CSCD) of Prince of Songkla University.

If the format of the talks can't be agreed any time soon, the same degree of violence that has occurred in the past two years will carry on this year, Asst Prof Srisompob said.

An estimated 60-70% of violent incidents in the deep South are the work of the BRN, the most powerful group of insurgents that has existed for more than five decades, he said.

"The BRN may still have a reason to not fully engage in the talks, which could be that its key proposal has yet to draw a response.

The group also has several sub-groups that may have the same goal yet follow different approaches to achieve it," said Tayudin Osman, a humanity lecturer with Yala Rajabhat University.

He agreed the BRN now has the highest negotiation power of all groups involved in the talks.

Residents in the deep South who look forward to seeing peace being restored in the region deserve to know the actual progress of the peace talks bid, he said.

"People in the affected areas want to know how well the peace talks have progressed so far.

Do the talks still continue? Or has it already ended?" he said.