Passive smoking: Wat Mangkon Kamalawat, a famous Chinese Buddhist temple in Yaowarat is trying to improve local air quality by reducing the number of incense burners and only allowing burning activities to occur in outside areas.

The severity of the PM2.5 pollution crisis has finally forced the authorities to act tough.

However, not all polluters face the same sanctions.

Motorists, farmers and factories might be inspected and penalised for causing air pollution, yet religious worshippers who burn incense and worship items made of paper in shrines and temples will likely be let off the hook.

The smoke given off by incense sticks can be as toxic as cigarette smoke, according to the Ministry of Public Health website.

Incense sticks are made of charcoal wood, the burning of which results in the emission of harmful volatile organic compounds, particulate matter including PM2.5 and gases like sulphur dioxide, formaldehyde, carbon monoxide and nitrogen oxide.

Despite evidence of health impacts, forcing worshippers to give up their long-observed rituals is easier said than done and many governments have tried and failed.

A good example of this was when the Taiwan government tried to ban burning incense sticks and worship papers. 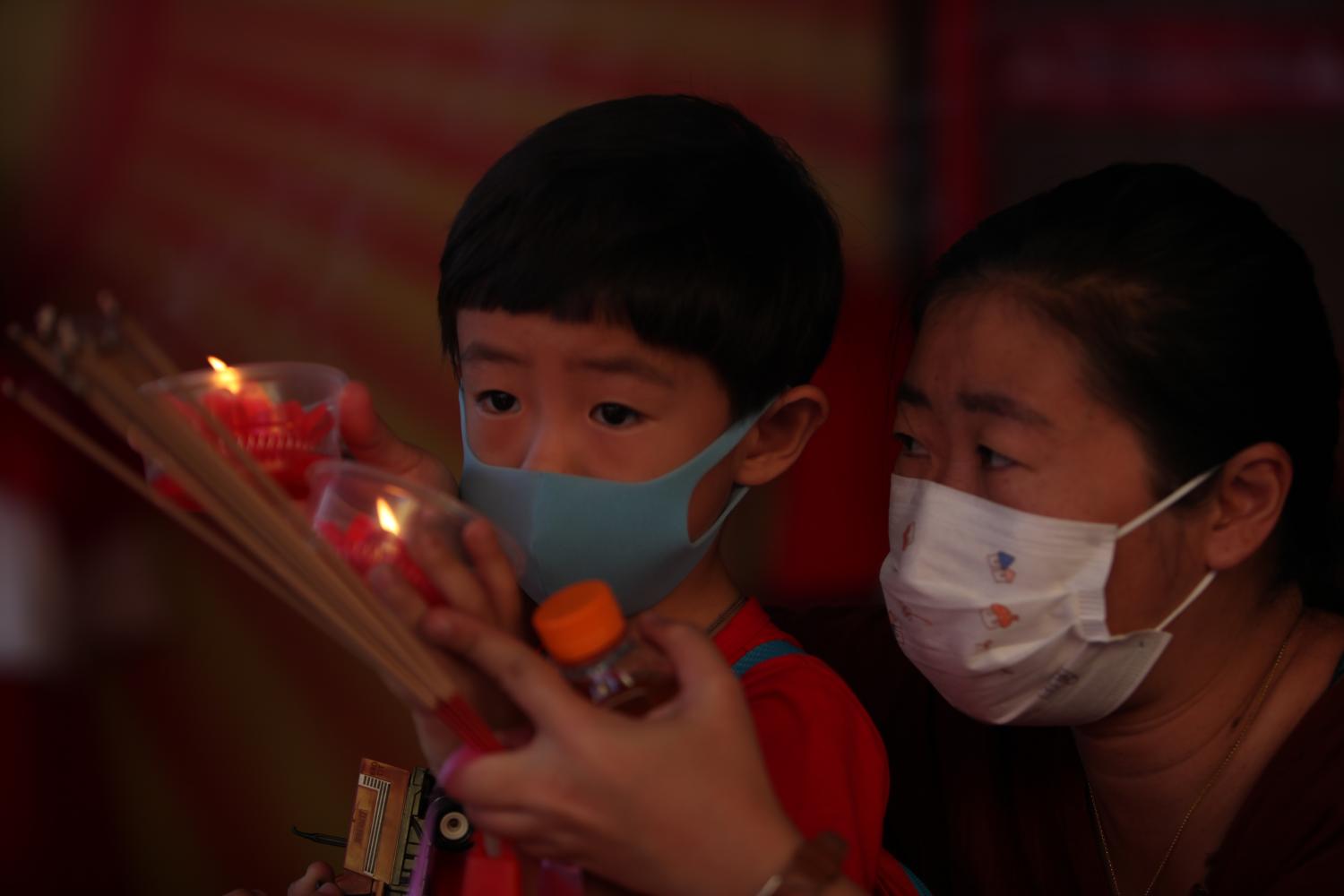 family environment: A mother brings her child to pay respect to the gods at Wat Mangkon Kamalawat on Jan 24, Chinese New Year's Eve.

Yet when the government attempted to ban this ritual in temples and shrines in August 2017 thousands of Buddhists and Taoists came out to protest.

The government was forced into postponing the ban indefinitely and instead mount a campaign to inform people about health concerns and seek voluntary cooperation.

Its most successful advertisements involved highlighting the dangers of incense burning to young children.

In Thailand, the Ministry of Public Health's initiatives have made little headway.

It did, however, manage to ban the burning of candles and incense sticks at the renowned Erawan Shrine in Ratchaprasong in 2018.

Traditionally one of the most polluted days of the year has been Chinese New Year's Eve when worshippers pay their respects to deities at Chinese temples and shrines which are often located in urban areas in major provinces. 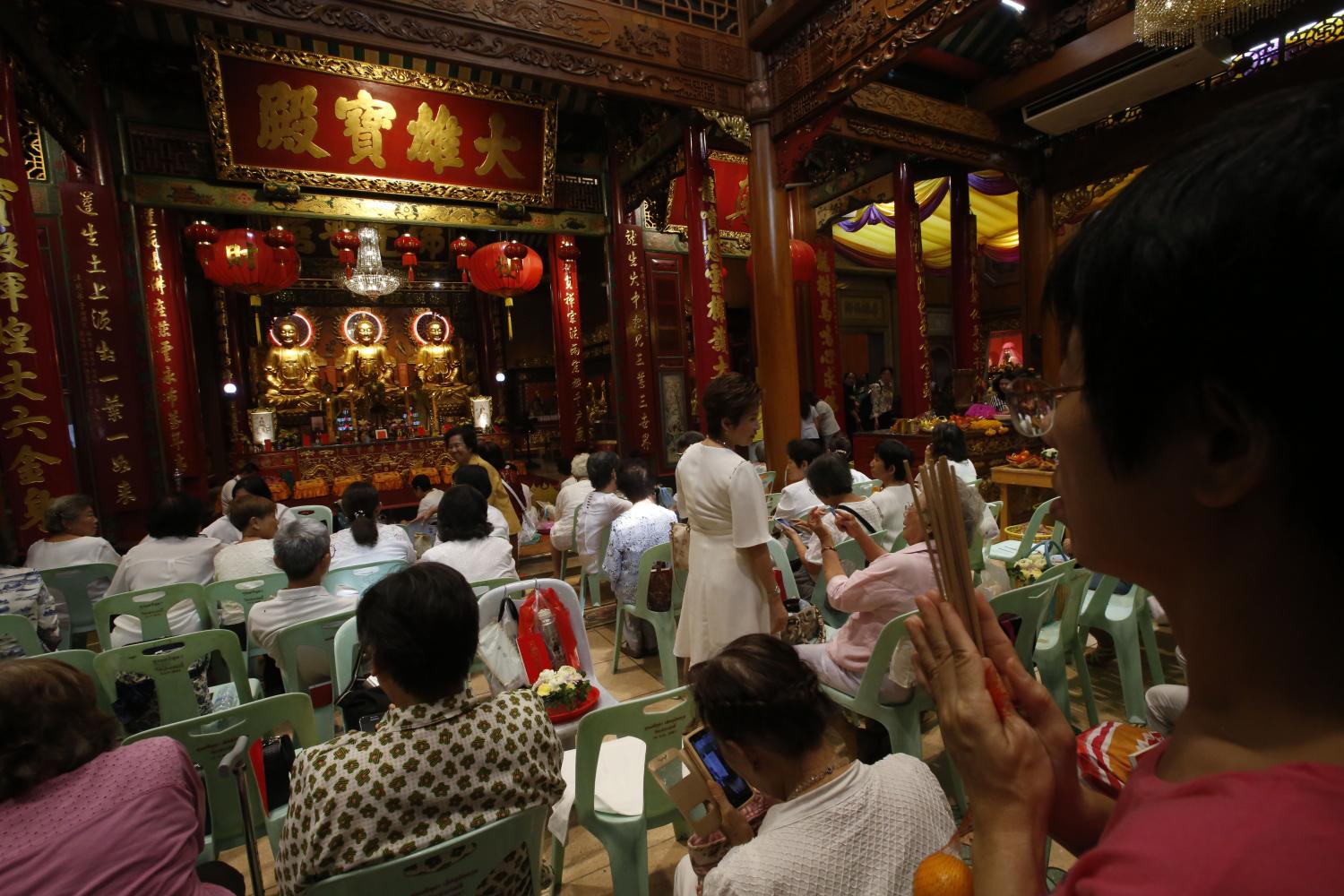 One of the most visited temples is Wat Mangkon Kamalawat in Yaowarat's Chinatown, located in the old town area of Bangkok.

On Chinese New Year's Eve this year on Jan 24, the level of PM2.5 reached 180µg/m³ at the temple according to data from the air monitoring system during a ceremony when incense burning took place.

The government has set its permissible threshold for PM2.5 at 50 µg/m³.

Air quality monitoring at temples and shrines is a sensitive issue, and places of worship have usually fought against allowing the installation of such equipment.

Wat Mangkon Kamalawat, on the other hand, welcomed the air monitoring project and has joined in with campaigns to reduce the burning of incense sticks and worship papers for over two years.

For this Chinese New Year, the temple cooperated with a research project aimed at changing the physical and cultural landscape of Yaowarat community.

The "Development of Art and Cultural Assets in Yaowarat" project is being carried out by a research team from Silpakorn University and financed by the Thailand Science Research and Innovation.

The 15-month project started in the middle of last year to study Yaowarat community and provide recommendations and plans for sustainable development, according to Assoc Prof Nantanit Wanichacheva, vice-president for research at Silpakorn University.

One of the aspects being studied is environmental management, and this includes air pollution caused by burning activities in shrines.

According to the Interior Ministry, 22 of the 261 shrines in Bangkok are located in the Yaowarat area, and most of them are over 100 years old. Until now, there have been no records kept of the effect of burning incense sticks on local air quality.

Wutthichai Arrakphochchong, deputy dean of research and public services at Silpakorn University, says he believes these rituals cannot be changed through the adoption of strict rules alone. 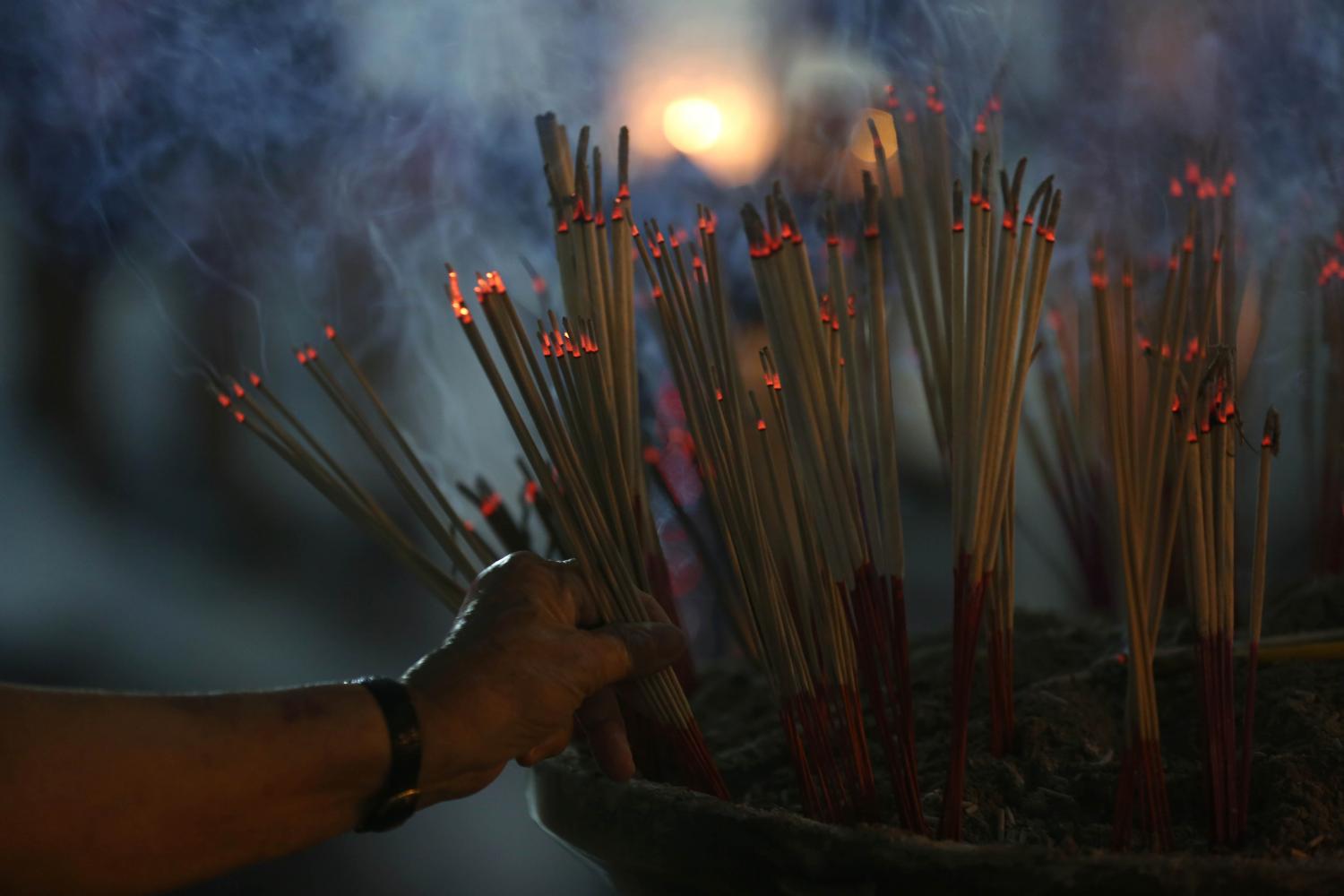 sign of faith: Incense sticks are made of charcoal wood, the burning of which can give off hazardous fumes.

"To deal with this issue, we need to factor in social dimensions which include temple management, culture, tradition and faith," he told the Bangkok Post during a visit to the temple on Chinese New Year's Eve.

"The team believes that any solutions to this issue must be based on understanding. We also believe in the participation of stakeholders. So we approached the temple to join our alliance. If this famous temple can embrace change, its congregations may follow," he said.

Wat Mangkon Kamalawat is globally famous and a magnet for tourists, especially from China.

During special occasions such as Chinese New Year, more than 100,000 worshippers, many of them tourists, visit the temple each day.

Phra Thawatchai Kaengsingha, an assistant to the abbot of Wat Mongkon Kamalawat, said the temple has become aware of the health impact of inhaling smoke from incense sticks.

"Monks and staff have been living with this health threat for a number of years," he said.

In the light of these risks, and with the help of the team from Silpakorn University, the temple decided to attempt to change the culture surrounding the burning of incense. 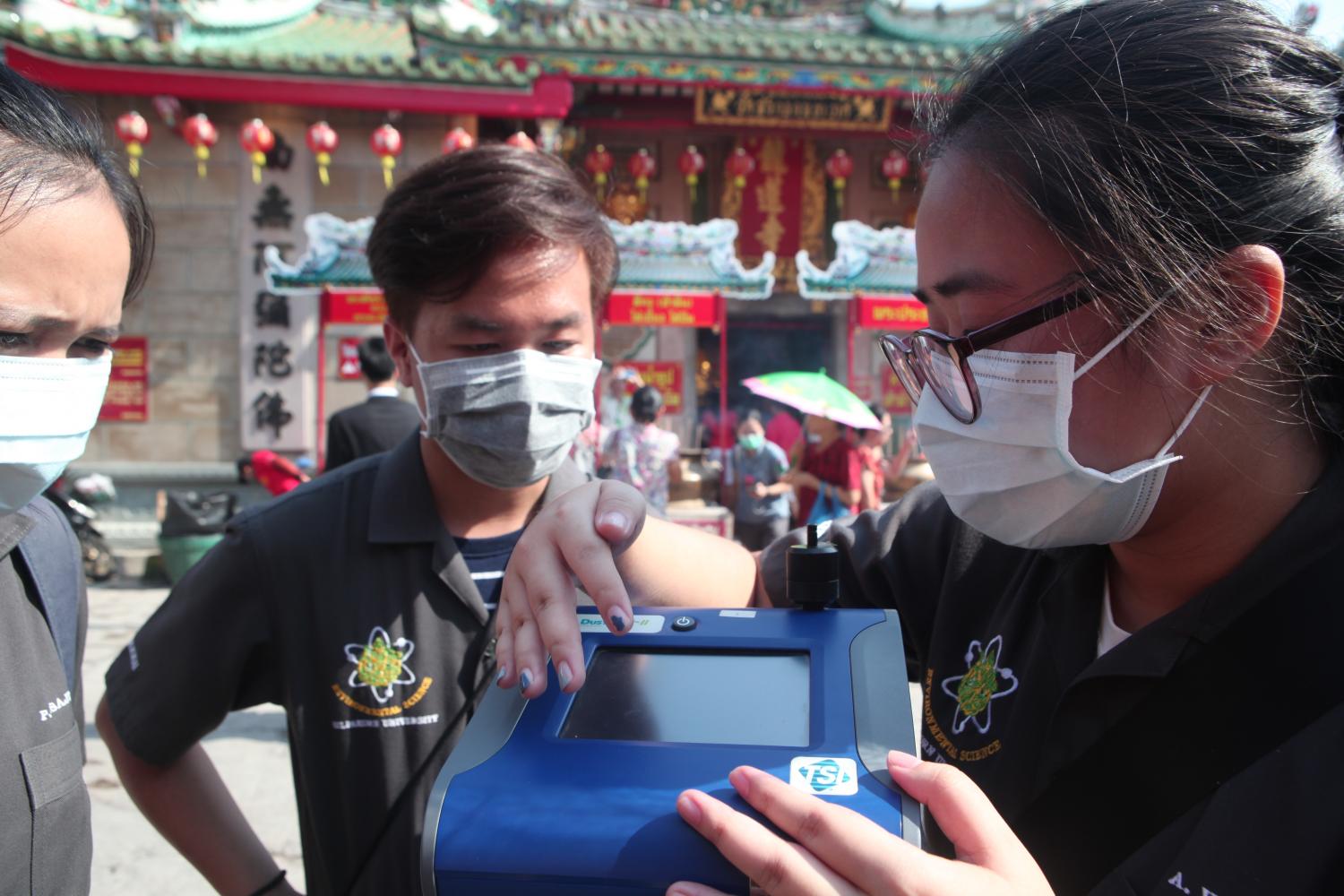 detective work: Researchers from Thailand Science Research and Innovation installed air quality monitoring sets at the temple to find out the levels of PM2.5 caused by the burning of incense sticks.

The temple has already reduced the number of incense burning sets from 50 to five and moved them away from the inner shrine to outside in the open air.

"We also assigned staff to explain why we had to do it, so people can understand the problem and cooperate," said the monk.

"One of the messages that we try to convey to worshippers is that merit and blessings do not depend on the number of incense sticks and worship items that are burned."

In addition, the temple has also installed air filters in the shrines and banned the burning of any worship items made from paper in all of its indoor areas.

Visitors can still leave worship papers at the shrine, but the temple has hired a private company to have them burnt elsewhere and dispose of the ashes properly.

Phra Thawatchai believes that it is impossible to ban worshippers from carrying out the practice altogether. 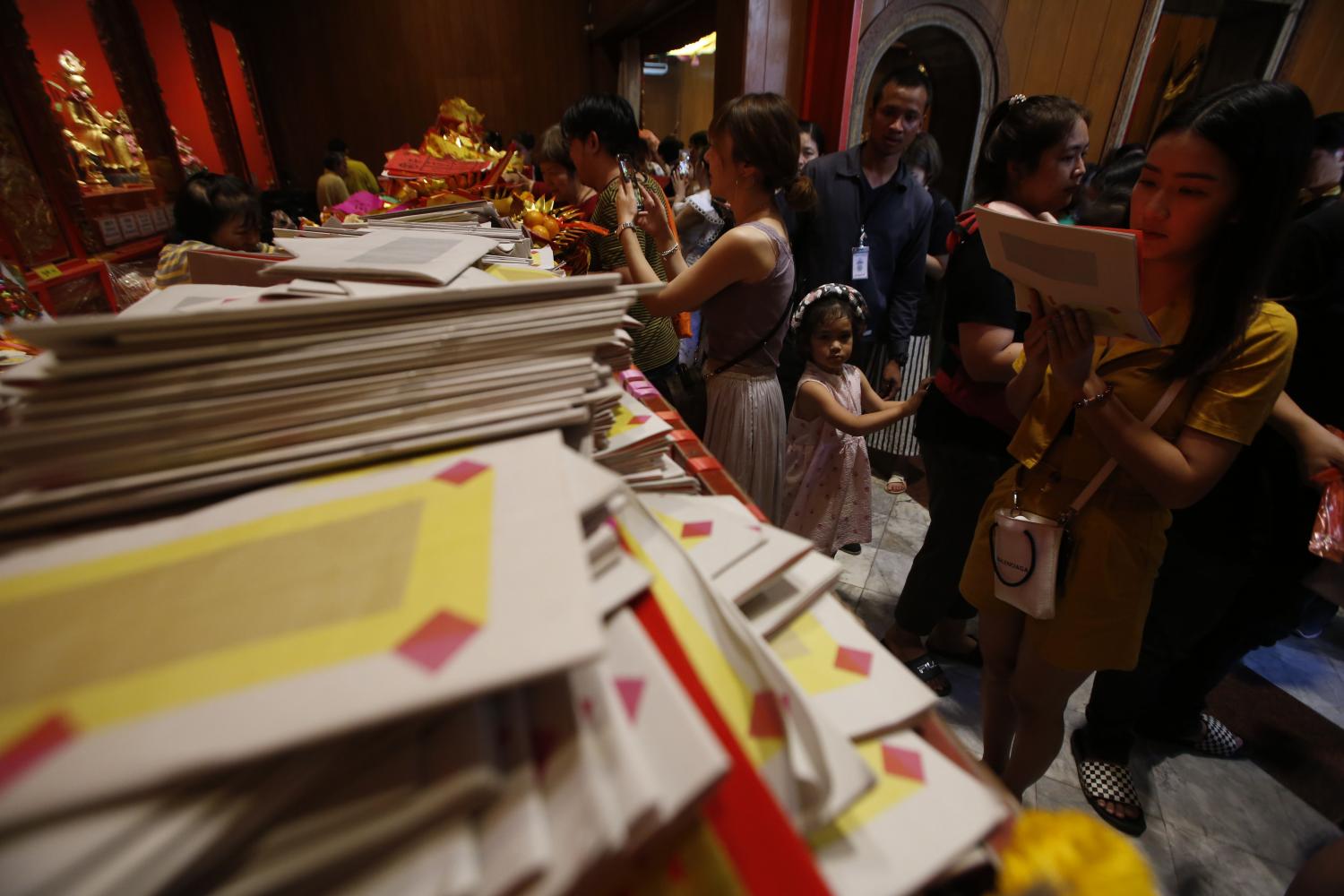 "Even though we have reduced the number incense burners and prevented visitors from burning papers, people still insist on doing it. But we can try to convince them and ask them to cooperate."

"Stopping the burning of incense and worship papers can also save trees and improve air quality," she said.

Ms Sumarayat had brought her family to pay their respects.

The air quality in the temple, especially the shrine has improved since the initiative began, she noted.

"In the past, stepping into the worship altar inside Wat Mangkon Kamalawat was like walking into the smoking room of an airport. Many people walked out red-eyed from being exposed to so much smoke."

Ms Sumarayat said she believes the air quality at the temple will be better next year.

"It is just a matter of time," she said. "Modern worshipers and the young generation tend to believe that worship is about hearts, not about burning incense sticks and worship papers."

Thailand's economy grew faster than expected in the first quarter supported by a pickup in agriculture and an easing of Covid-19 curbs, but higher inflation remained a drag on a fragile recovery.