Samut Sakhon is seen by some as a success story but the riches have come at a toxic price.

FATAL SHORE: Samut Sakhon province, a fishery and industrial centre not far from Bangkok, has been known for deadly pollution that encompasses coastal erosion, wastewater, garbage and air pollution.

Bangkok's seaside neighbour Samut Sakhon is known for many things -- as a fishing hub, a thriving seafood market, and also as the largest location of Myanmar's migrant community in Thailand.

The province has boasted a port for at least two centuries which allowed it to become a fishing community before it was lifted by the tides of commerce over the past four decades.

Now, this once agriculture-based province has transformed into an industrial hub, with modern, mechanised piers and food-processing plants straddling Rama II Road along the coast.

The seafood processing factories compete for space with ironwork and recycling plants in Muang district while in the canal-fed surroundings, farms and orchards have given way to urban sprawl.

Industry has made the province rich, catapulting it into the top five contributors of national gross domestic product, according to official data.

However, the new prosperity has come with a price. Since 1995, the Pollution Control Department (PCD), worried by the province's increasingly contaminated seas and soil, placed Samut Sakhon on its pollution-control list,

After 25 years as an environment-controlled zone, the problem of pollution persists and residents are questioning whether their quality of life is taking a backseat in the quest to make money.

Penchom Tang, director of Ecological Alert and Recovery Thailand (EARTH), a well-known conservation group which monitors industrial pollution, said Samut Sakhon is perhaps one of the most polluted provinces in the country. This is partly due to the fact that most of its factories are small and medium-sized, he said, since the authorities do not have systematic plans or investments for large environmental infrastructure.

"We have followed the environmental data in Samut Sakhon province for the past few years. We found that sediment and water, as well as food in this province, are heavily contaminated. Of course, the province has become rich, but that is not reflected in the quality of life here," Ms Penchom told the Bangkok Post.

"Local officials acknowledge the pollution and want to solve the problem. But the real problem is the lack of consistency of environmental management policies because the turnover rate of provincial governors is high. Provincial governors arrive only to be quickly moved on to new positions or even retirement. So officials do not dare to commit to long-term plans," she said.

EARTH, a civic group, has been monitoring industrial pollution on the eastern seaboard, especially air pollution from the petrochemical industry in the Map Ta Phut Industrial Estate, for two decades. It recently expanded its work to study Samut Sakhon province.

During 2015-2016, researchers from EARTH joined hands with scientists from the Arnika Association, Czech Republic, studying heavy metals in eight industrial areas across the nation.

The study found samples from soil and water from the industrial area in Muang district in Samut Sakhon province to be contaminated with high levels of arsenic, lead, cadmium, chromium, zinc, copper and nickel.

The study also found a high level of persistent organic pollutants (POPS), toxic byproducts from industrial processes, in eggs from free-range chickens in Muang district in the province, suggesting some types of POPs are entering the food chain.

An egg tested by experts during their visit to Samut Sakhon's Muang district was found to have 84.04 nanogrammes per kilogramme of dioxins and furans, which is 33 times higher than the safety limit set by the European Union.

EARTH last year started a campaign called "Green Samut Sakhon". The first six months of the campaign focused on collecting more data on pollution and the latter part focused on empowering the local community and raising awareness to solve the pollution problem.

EARTH's two-year Green Samut Sakhon campaign is funded by Thai Health, a public organisation that has used tax collected from cigarettes and alcohol to tackle social issues such as health and environmental problems. 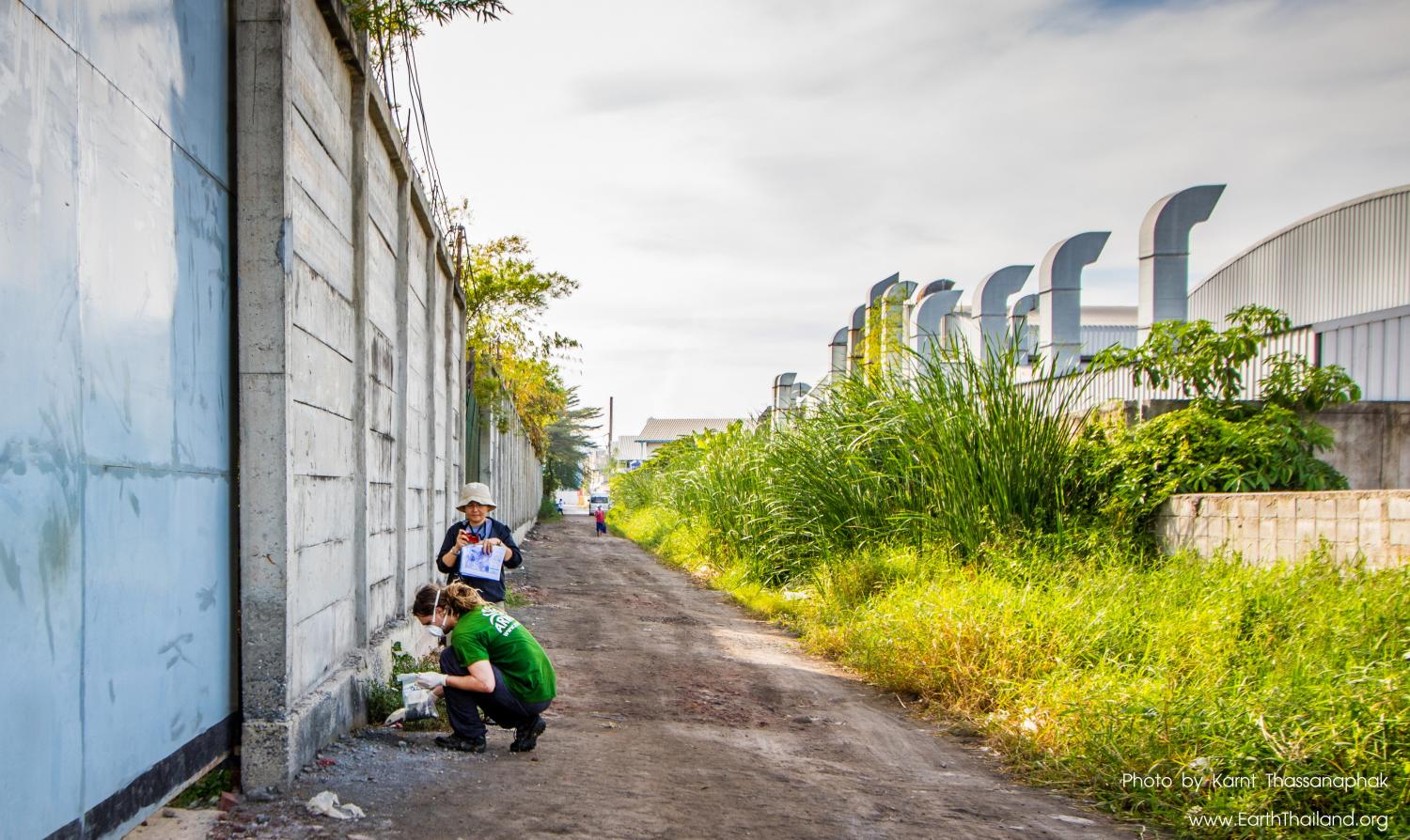 TEST RESULTS: Penchom Tang, director of EARTH and scientist from Arnika, collects soil samples near a factory in Samut Sakhon to ascertain the level of contamination.

The campaign comes in two parts. The first is to collect environmental data and pollution records in the province; the second is to empower the local community and the private sector to monitor and tackle pollution.

Green Samut Sakhon, she said, focuses on a pragmatic plan.

"What we want to create is real awareness in local people and a network to tackle pollution which has been formed by the willingness of local people," she said. "People are alarmed by PM2.5 yet they do not know how to protect themselves."

EARTH has collected data on pollution since August and recently discussed issues with local communities and local administration, she said.

"We will focus on teaching local communities to monitor air pollution first," she said. "We believe that when people know the data, they will become aware and then they will start to act."

In dealing with perhaps the most polluted province in the nation, what EARTH refrains from doing is telling people what to do.

"We will not tell local people what to do, or introduce projects to them," she said. "The air monitoring project, indeed, comes from the needs of the local community.

"All of our action plans will come from the decisions and demands of local people. Local people must be the driving force to solve pollution. All we do is to empower them to do so."

On 21 Jan this year, EARTH signed an MoU with 22 partners, including provincial administrations, local universities, schools and hospitals to launch a network to monitor PM2.5. 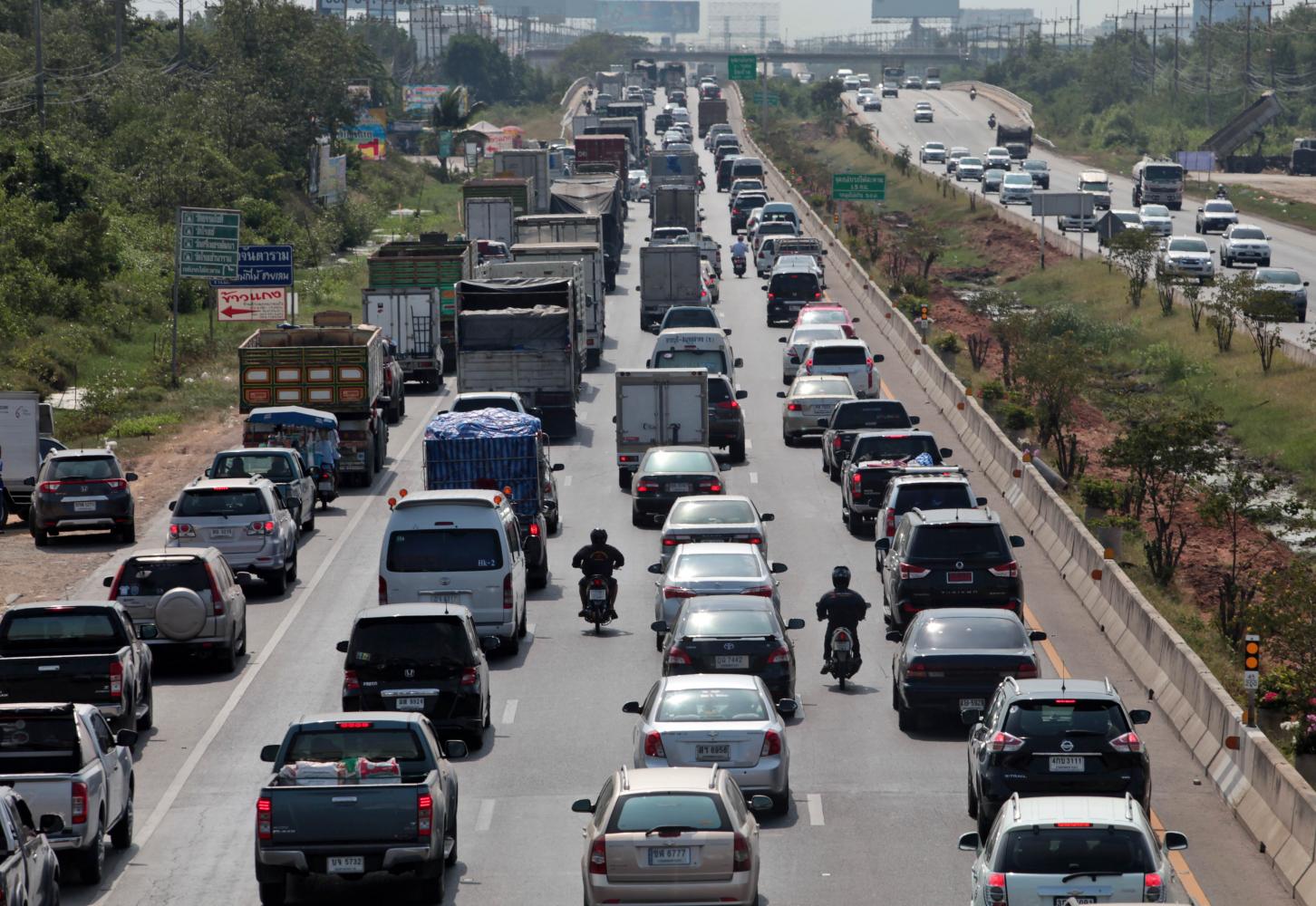 GRINDING TO A HALT: Vehicles at a standstill on the highway South on Rama II Road in Samut Sakhon are a common sight.

Despite the province being faced with industrial pollution, villagers and local administration are also concerned with PM2.5 air pollution.

One of the air monitoring stations is installed at Wat Ratcharangsan School along Rama II Road. It is known as a spot with high levels of PM2.5 dust emitted from vehicles and trucks.

Under the campaign, students, as well as officials and community leaders, will be trained to understand how to use air monitoring equipment and, above all, understand the implication of the air quality.

"Villagers and students must understand what it means when the air quality index reaches yellow, orange and red and how they should behave," she said. "And when people start to consistently monitor air quality, the more are they will become of their health problems."

"Yet, these facilities are not enough to deal with air pollution. Even more, the monitoring equipment is placed in areas that are not a source of major air pollution," she said.

Vehicles are often blamed as a large contributing source of PM2.5. However, another source of PM2.5 is factories, according to Kannikar Janchidfa, a researcher at EARTH who has collected data in the province. 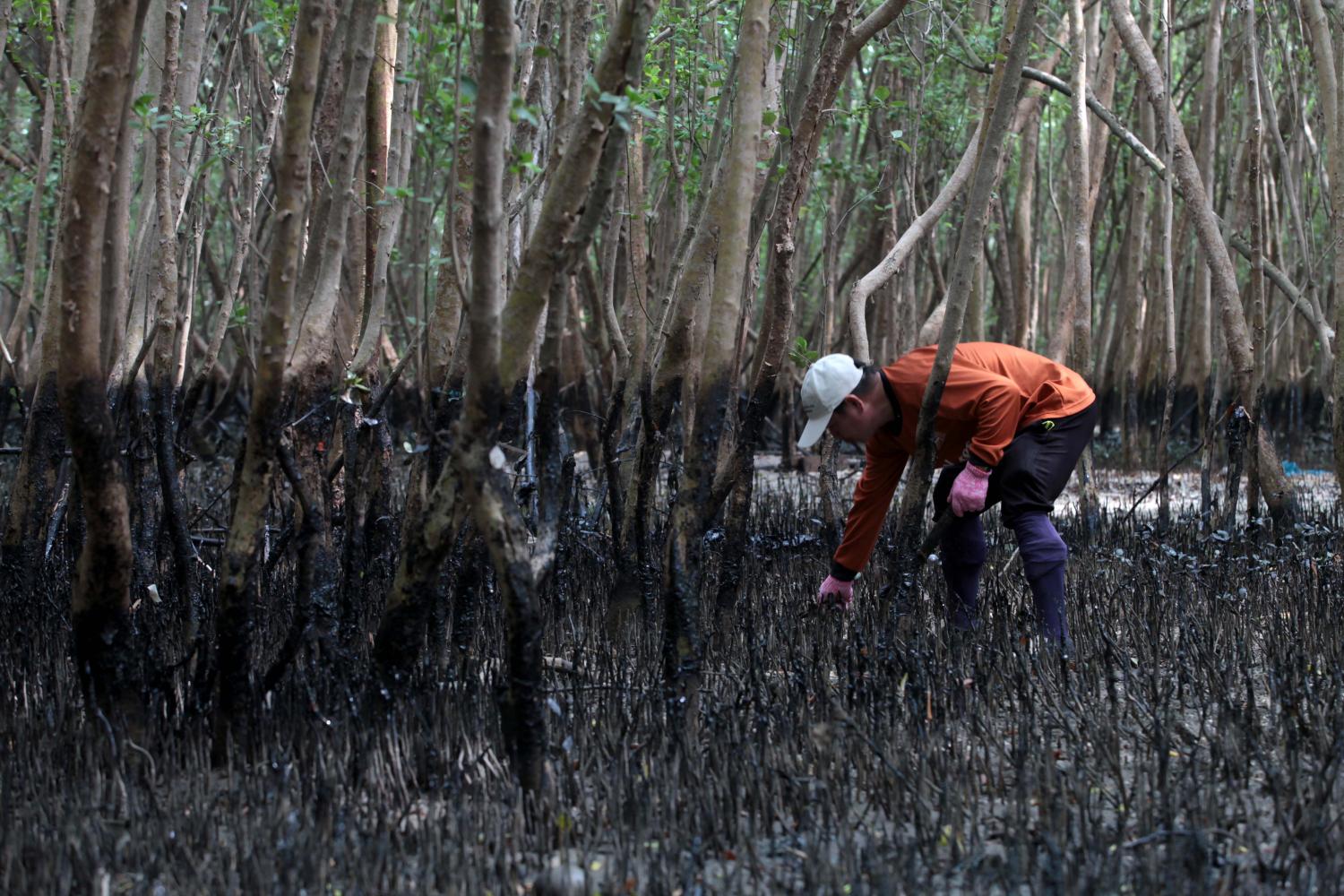 lead-in: A Samut Sakhon resident helps clean up an oil spill among mangrove trees. The oil, believed to have come from a boat sailing near the mouth of the Mae Klong River, was found to have polluted a section of the Gulf of Thailand between Samut Songkhram and Samut Sakhon provinces.

Air pollution with PM2.5 and other volatile compounds have been found in the province's environment. There has been no official study to uncover the source of the pollution but previous environmental research points to factories as the culprits.

"Most of the factories in this province are small and medium scale plants which do not have budgets to install environmental protective equipment," she said.

There are almost 6,000 factories in this province, most of them widely scattered.

"Provinces like Rayong might have more factories but most of them are located in private industrial estates," she said.

"Investors have put a lot of money on wastewater treatment systems, garbage disposal and air filters to provide a buffer zone to put some distance between the factory areas and local communities.

"But there is no system like this for factories in Samut Sakhon because the majority of factories are small and medium-sized, some with less than 50 workers," she said.