In preparation: Volunteers and residents in Lampang's tambon Phichai work together to build a dam to use as a firebreak to mitigate the impact of bushfires. The province suffers serious forest fires every year.

Forest fires have stretched the government's manpower and resources, prompting authorities to rethink their approach and work on keeping forest floors moist to contain the spread of fires.

With trees shedding their leaves early this year, Thailand has experienced at least three major wildfires, including one that raged through Phu Kradung National Park in the northeastern province of Loei, destroying about 3,400 rai of reserve forest.

Wildfires occur every year, affecting most of the country.

The hardest-hit are provinces with high mountain ranges in the upper North, such as Chiang Mai, Chiang Rai, Tak and Lampang.

In Lampang alone, at least 361 forest fires were reported between February and April last year. Most were found to be man-made, sparked by people foraging for wild plants as well as wildlife poachers who descend on the same areas repeatedly every year.

In a bid to mitigate the severity of these fires and their impact on the people's health, Lampang governor Narongsak Osottanakorn last year launched a pilot project called Pa Piak (wet forest), along with public campaigns against biomass burning.

Funded by Thai Health Promotion Foundation (ThaiHealth), the pilot project last year in Ban Rai Phatthana of tambon Phichai in Lampang's Muang district was hailed a success in limiting the spread of wildfires.

This year, the project is being expanded to cover all 36 communities in Khelang Banphot National Park's forest communities encompassing the Doi Phrabhat-Mon Phraya Chae areas.

Among the methods employed in the Pa Piak wildfire buffer zone was to divert water both from irrigated sources and rain water to small waterways which have dried up in the mountains.

Along the waterways, fast-growing plants are planted to trap moisture, said Suraphon Tansuwan, head of the Pa Piak firebreak development group in Lampang.

Another form of firebreak is check dams created to hold water and sediments, which also help retain moisture in the ground, he said.

There is also the technique of releasing water from the top of a mountain in fire-prone areas so it cascades down and keeps the ground damp. Planting banana trees among clusters of other trees can also help stop fires, he said.

"Although these firebreaks may not be 100% effective in preventing wildfires, they are better than having no defence at all," he said.

Mr Suraphon said only when every community member realises that they must put public interest before their own will the problem have a chance of getting eradicated. "The fires produce haze which has a significant impact on people's respiratory health," he said.

This forest has recorded a high number of hotspots each year, said Worachon Phromsaen, leader of a Mon Phraya Chae forest protection group.

He said that no matter how hard the communities have tried to prevent wildfires, blazes break out every year. 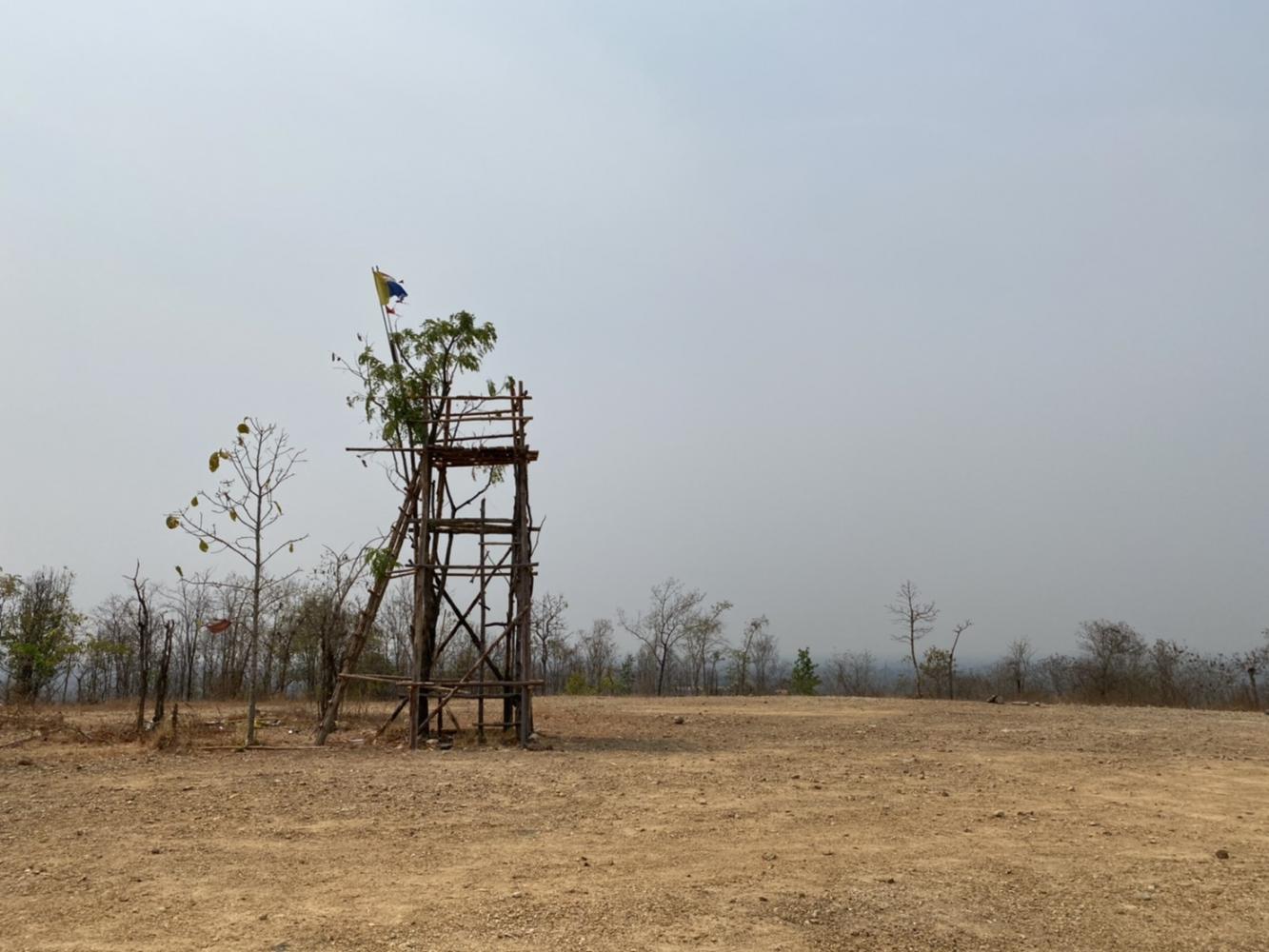 An eye out: An improvised observation post is built to monitor surrounding areas for wildfires.

The Pa Piak project presents hope for residents desperately seeking a way to permanently end forest fires. When they first implemented the firebreaks, they believed the techniques would bear fruit. However, the question was where these firebreaks should be built to achieve the best results.

At the same time, local residents created a wildfire surveillance unit, which was considered to be as important in dealing with the fire problem as firebreaks.

Duangphon Kiatdamrong, chief of the Khelang Banphot National Park, admitted the park only had 20 officers to patrol the entire area in a bid to prevent man-made fires.

However, she said, volunteers have been of tremendous help in the wildfire containment and prevent operations.

She said the park officers normally start patrolling the forest daily from mid-March to the end of April, the period when most trees shed their leaves which can easily catch fire and set off runaway wildfires. However, this year, the shedding of leaves began a month early from mid last month and started again in the middle of this month and will continue until the end of April, Ms Duangphon said, adding that the forest is highly flammable with dry leaves piling up.

Also, haze generated in large part by forest fires has become a serious problem and affects every corner of the country now, said Sirikiat Luangkopkit, an assistant manager of ThaiHealth.

Lampang was the first province to receive funding from ThaiHealth for the firebreak development project, which is part of a strategy designed to encourage provinces to play an active role in the management of natural resources and environment.

BAYONNE, France: A French bus driver who was badly beaten by passengers after asking them to wear face masks in line with coronavirus rules has died, his family said, sparking tributes from political leaders who condemned his "cowardly" attackers.