Shoppers go in fear of their lives

Deadly shootings at shopping malls have never been a pressing issue in Thailand until early this year.

As many as 34 people have been killed and 62 others injured in less than two months, which is leaving shoppers fearful and the government facing the uphill task of preventing a recurrence of such incidents. 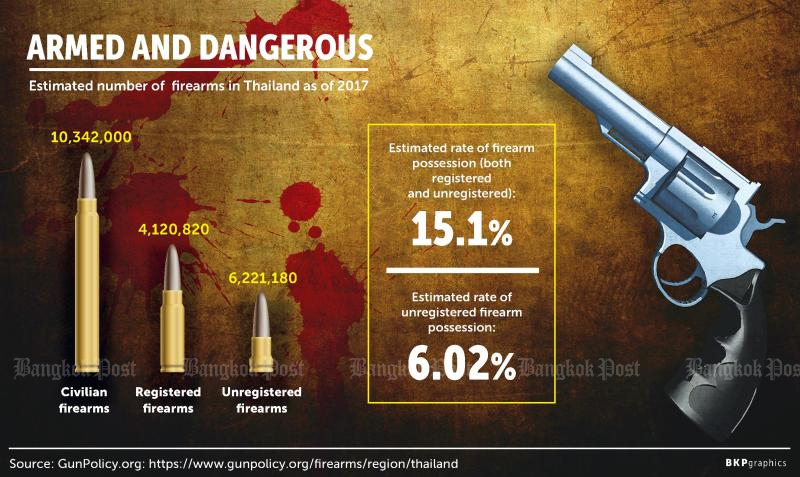 On Jan 9, three victims, including a two-year-old boy, were gunned down by a school director-turned-burglar who also wounded four people while raiding the Aurora gold shop in a Lop Buri shopping mall.

Even more tragic was the Feb 8 mass shooting at Nakhon Ratchasima's Terminal 21 when a soldier went on a rampage, spraying shoppers with bullets. The massacre left 30 dead, including the gunman, and 58 wounded.

The public was still gripped by fear when gunshots again rang out on Feb 18 at a cosmetic surgery clinic in Bangkok's Century Movie Plaza. A man shot dead his ex-wife and injured another woman.

More lives would have been taken on Feb 27 at Central Rattanathibet if police had not stepped in to stop a gun-toting man who opened fire while quarrelling with his wife. Nobody was hurt this time.

These incidents have prompted law-enforcers to examine the flaws in Thailand's gun-control laws and to look at why many people resort to weapons as a way to end their problems.

Despite the existence of laws to prevent the illegal possession of weapons, in practice it is not too difficult for people to acquire a gun, Crime Suppression Division (CSD) chief Jirabhop Bhuridej said.

State gun-sale projects and trades through social media are to blame.

Projects run by police and military units as well as some agencies under the Interior Ministry allow guns to be sold to officials inexpensively.

"The flaws in gun control start here," Pol Maj Gen Jirabhop said, adding that some officials allow their associates to use weapons and can even sell them off if they have guns in their possession for five years.

Though these projects aim to make guns more affordable for officials who need them, they should only be sold when absolutely necessary and restricted to only a small group of officials, he said.

"I personally don't see these sales as being necessary," Pol Maj Gen Jirabhop said. "This will only lead to more guns being imported, which means more risks will follow."

The illegal sale of guns via social media is another worry. The CSD is aware of this problem and has been working to arrest wrongdoers, but Pol Maj Gen Jirabhop admitted that eradicating them was not an easy task.

The internet has also become a key source of information on how to make guns as well as a channel of communication among sellers and buyers. "I can say they're capable of making good usable guns," Metropolitan Police Bureau chief Phakkhaphong Phongphetra said. "It's not difficult to find materials. Nothing is complex."

Anything from .22, .38 and 9mm calibre shotguns to .45-calibre high-pressure weapons are available online, he added.

In a move to curb the trade, officers are working with logistics companies to intercept transport and delivery of unlicensed weapons. A recent clue given by a company led to the arrest of suspects in 36 target areas, the city police chief said.

Yet millions of weapons are acquired secretly. As of 2017, the number of unregistered guns in Thailand stood at 4 million, close to the 6 million registered legally, according to Small Arms Survey, a Geneva-based network campaigning against the illicit proliferation of light weapons.

Thailand was ranked first in Asia for the highest number of privately owned guns, the centre said, adding that on average, 15 of 100 people in the country own a weapon.

On Oct 12, 2017, the National Legislative Assembly (NLA) amended the firearms law, which bans foreign expats in Thailand from owning and using guns and also places controls on silencers, soft bullets, fireworks and Bang Fai rockets. Under the law, threatening others by pretending to have a gun, bullets, explosives or bombs can result in a jail term of up to three years and/or a fine of up to 60,000 baht. Other offences under the law carry a jail term of one to 20 years.

Apart from worries over these figures is the fact some people are not psychologically qualified to use these weapons. The motives that spark demand for guns are also concerning, said Pol Maj Gen Jirabhop.

Many gun owners may absorb offensive and hostile behaviour from their surroundings, ranging from family quarrels and bullying at school to aggressive acts they witness in the media. He said the idea of using a gun can come to mind when people are struggling with serious conflicts with their boss or partners or even huge debts.

Army chief Gen Apirat Kongsompong admitted the soldier who turned his gun against shoppers in Nakhon Ratchasima had been maltreated by his commanding officer and the officer's relatives.

Police investigators suspect the man who gunned down his ex-wife at a Bangkok shopping mall may have unleashed his anger out of jealousy.

The school director who was behind the deadly burglary in Lop Buri, meanwhile, provided conflicting accounts. He initially claimed he had done it for excitement, but later admitted he had been facing financial problems.

Now, even small squabbles among motorists can be an issue of concern and in some cases trigger use of weapons. "A driver can open fire just because another motorist has grazed his car," Pol Maj Gen Jirabhop said, adding that action has to be taken against these aggressive individuals even if they claim to be connected to influential people.

"Local police can pass these cases on to the CSD if they are afraid to deal with these drivers," he said.

Pol Maj Gen Jirabhop also suggested stricter checks be applied to people applying to register gun ownership, regardless of who they are. The authorities need to know "whether their mentality will allow gun ownership", he said.

These three words are vital for people to protect themselves if shooting sprees like the one in Nakhon Ratchasima recur. The first thing people should do is flee the crime scene. If they cannot escape, they should hide themselves and turn off their mobile phones, officers said. If confronted by the attacker, then there is nothing else but to fight back.

"Wherever you go, always take note of emergency and fire exits because you will never know when something bad will happen," Pol Maj Sirirat Piankaew, a police inspector of the Ratchawallop Police Retainers, King's Guard 904, said in a Facebook post.

"Think of your survival first. Don't watch. Don't record those events on your smartphone."

People are being introduced to the "Run, Hide, Fight" strategy and other emergency responses as part of efforts to cut down on tragic events.

The first group of people to undergo this training are executives and staff of Impact Exhibition and Convention Centre in Nonthaburi. They need this because many trade events are held at that venue, said Pol Col Piyarat Suparatana, chief of the patrol unit of the Patrol and Special Operation Division.

HANOI/MANILA, Vietnam is preparing to evacuate nearly 1.3 million people as it braces for the impact of typhoon Molave, which lashed the Philippines overnight causing flooding, landslides and leaving at least a dozen fishermen missing on Monday.