A water management project threatens communities who have lived by the waterway for generations, shifting focus away from the root causes of shortage

Flowing freely along the Salween Basin, the Yuam River has been home to Karen villagers for many generations. From cradle to grave, they live off the land and the river, and for years they have been passing down the wisdom of their traditional ways to their descendants.

However, their close-knit communities are now under threat, as the government's 70.7-billion-baht plan to divert some 1.8 billion cubic metres (m³) of water annually from the Chao Phraya River to the Bhumibol Dam gets underway.

In December last year, the Royal Irrigation Department (RID) resubmitted an environmental impact assessment of the project to a committee at the Office of Natural Resources and Environmental Policy and Planning (Onep). It was rejected for the second time over concerns about surrounding forests, tunnel excavation materials and compensation for communities affected by the water diversion project. 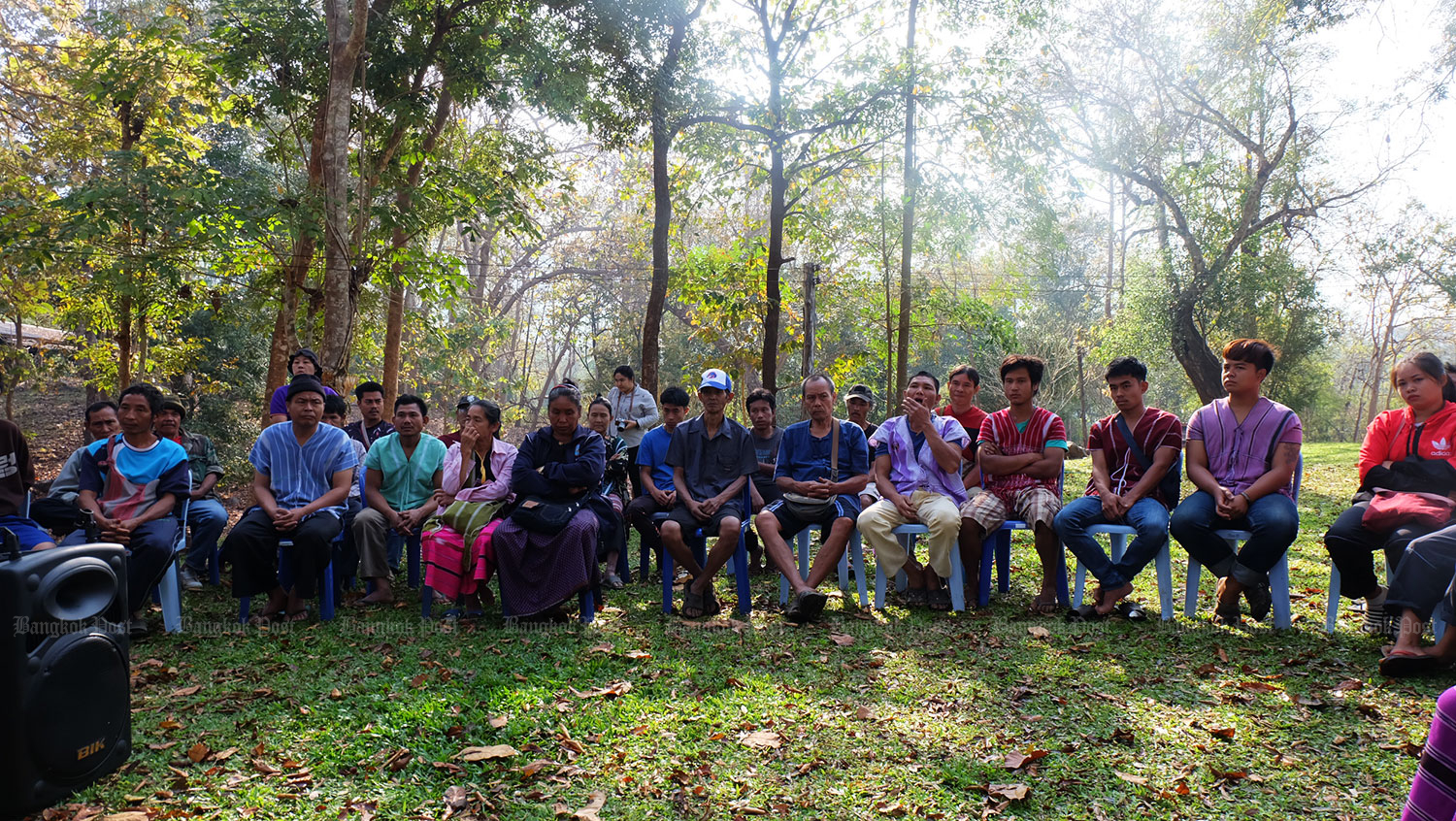 Karen villagers at Ban Mae Ngao in Mae Hong Son gather round to voice concerns over a water diversion project which threatens their communities.

According to the RID, the project will see a 69-metre-high dam with a storage capacity of 68.7 million m³ constructed on a 2,075-rai plot of forest land, along with a pumping station on a separate 55-rai plot and a 61.5-kilometre tunnel passing through 14 villages.

The project will stretch across five national forest reserves and a soon-to-be-declared national park that spans across Mae Hong Son, Tak and Chiang Mai. Once completed, it will be the first dam in the free-flowing Salween Basin, but at what cost?

Sitting right on the banks of the Yuam River, Ban Tha Rua village in Mae Hong Son's Sop Moei district was first established in 1967. It is home to ethnic Karen highlanders, who once lived in smaller communes scattered across the area.

Phlaeadae Loedsakunphai, a local villager, said her ancestors settled in the area many generations ago. She has never thought about living anywhere else, because the area has always been her home. In the village, she lives with her three children -- two of whom attend a local school.

"At the crack of dawn, I'd leave our home to work on our small plot by the river every day," she said in broken Thai.

"Apart from rice, I plant soybean and konjac there because they can be harvested after just a few months." 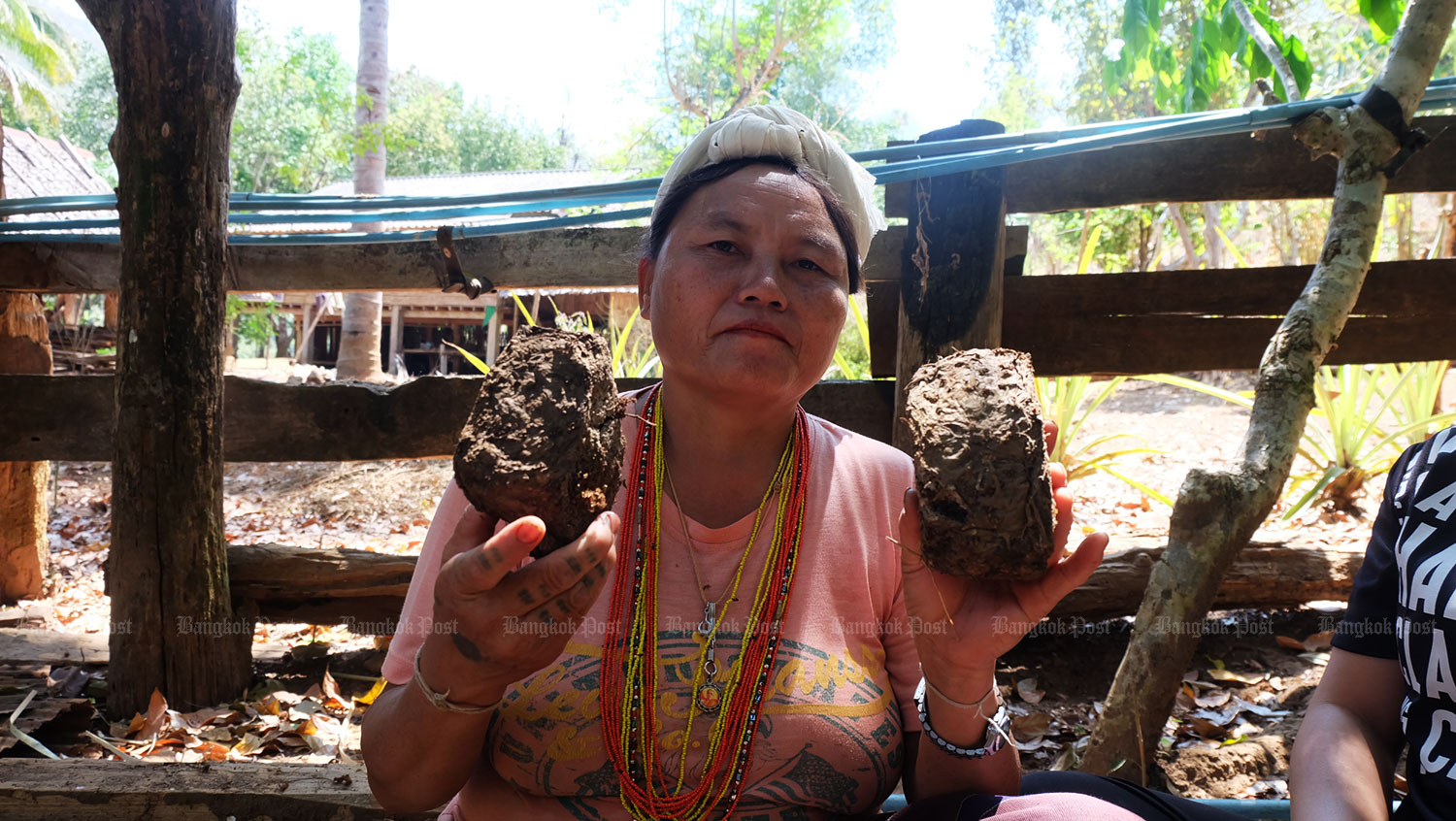 Phlaeadae Loedsakunphai grows konjacs for a living. Her farm could be destroyed by the project.

While her village is only 10 kilometres away from the concrete dam, Ms Phlaeadae said the authorities haven't said a word about the increased risk of flooding or about the compensation which they stand to get if their farms become inundated as a result of the project.

"I dare not speak about the issue because, as a displaced person, I feel powerless. I love my land, but I don't know if I have the right to object," she said.

Mueda Nawanat, a Karen woman who was once stateless herself, said because many locals in the area still lack Thai citizenship, they have no right to claim title to their ancestral land. As such, they are worried that they will not be compensated if they have to make way for the dam.

The bitter irony, she added, is that once the dam is built, highlanders will have to seek state permission to use their own land.

"For them, even applying for Thai citizenship is an uphill struggle. They fear that the project will destroy the river and threaten their traditional way of life," Ms Mueda said.

Ms Mueda said she recently went to a public hearing on the project, only to find it fraught with problems -- one of which was communication. She said the session was carried out in formal Thai, so many participants had no idea what was going on.

"I stood up and asked [the officials] to speak in the local dialect instead. Furthermore, many villagers further down the river weren't invited to the hearings," she said.

"Officials simply collected their ID cards and ticked the boxes [for them]. It was unfair because the RID is supposed to fetch credible information for the assessment."

The Yuam River snakes past verdant hills before it merges with the Ngao River not far from Ban Mae Ngao village. At their confluence, the water takes on a greenish-blue hue. This idyllic landscape is under threat, however, as the village lies in the middle of the pipeline which will link the dam to the pumping station located on Highway 105.

As he sat down with the Bangkok Post, Singkham Ruanghon, another Karen villager, recalled a fading childhood memory. 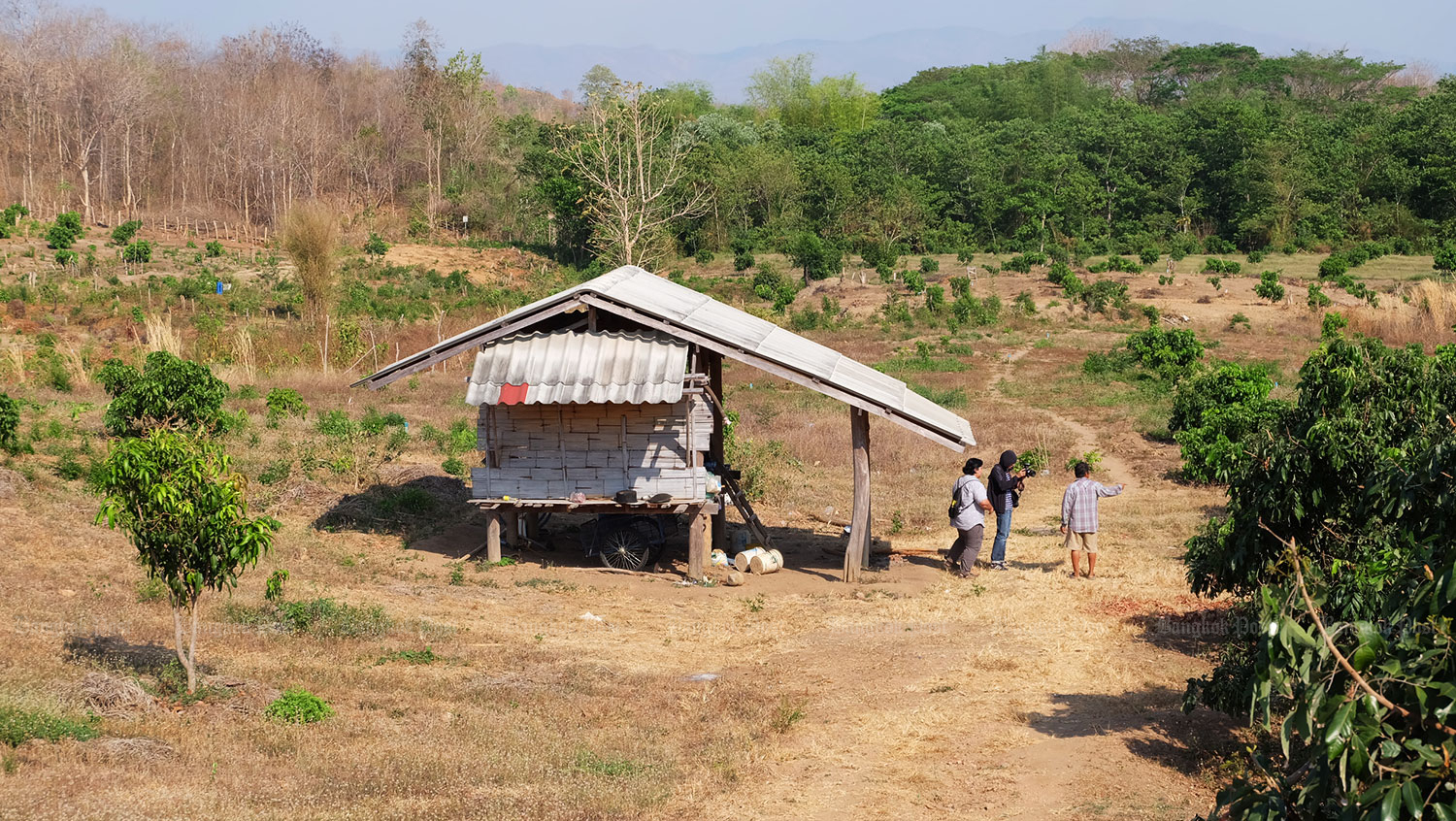 A house on a longan farm could end up being razed as the area is poised to be dug up for gravel to be used for construction in the water diversion project.

In the past, motorboats and rafts could sail up and down the river with ease. These days, he said, it's a struggle because they have to navigate around rocks on the riverbed.

"Do you know that the river is home to a breed of shrimp you can't find anywhere else? They spawn upstream every year. We eat and sell them and in return, we look after the river," Mr Singkham said.

"What will happen to the dam when our river dries up? Human greed is insatiable."

Another Karen villager, Prachuap Thongwarit, actually had to give up his land to make way for the pumping station. He asked the government to treat local villagers fairly because they have lived there for generations.

"It took me a decade to build [my] home. I set up its structure in 1995 and asked my neighbours to help find the wood to build each section bit by bit, until it all came together. I put away money for the construction that I made from selling soybeans I farm. I can't start again from scratch," he said in despair.

The dam and the pumping station aren't the only structures which will be built on expropriated land. The dam's 61.5-kilometre water tunnel will pass underneath at least 14 communities before it discharges water near the village of Banmaengud in Chiang Mai's Hot district. Tarn Srinuan said his 10-rai longan farm has been earmarked as a storage area for tunnel excavation materials.

"I love my land. I don't know where else I can go. I can't live over there [on the mountain] because it is a protected forest area," he said.

The RID said the government will compensate those relocated by the project, regardless of whether they have title deeds to their land. Once the cabinet approves the project, it can specify the amount of compensation, it said.

The Karen's rich folklore is a testament to their connection with the natural world. Indeed, the Karen believe that the environment is the embodiment of the divine spirit.

Preu O-Dochao, another Karen villager, used the traditional practice of hanging a newborn child's umbilical cord as an example of their respect for nature. 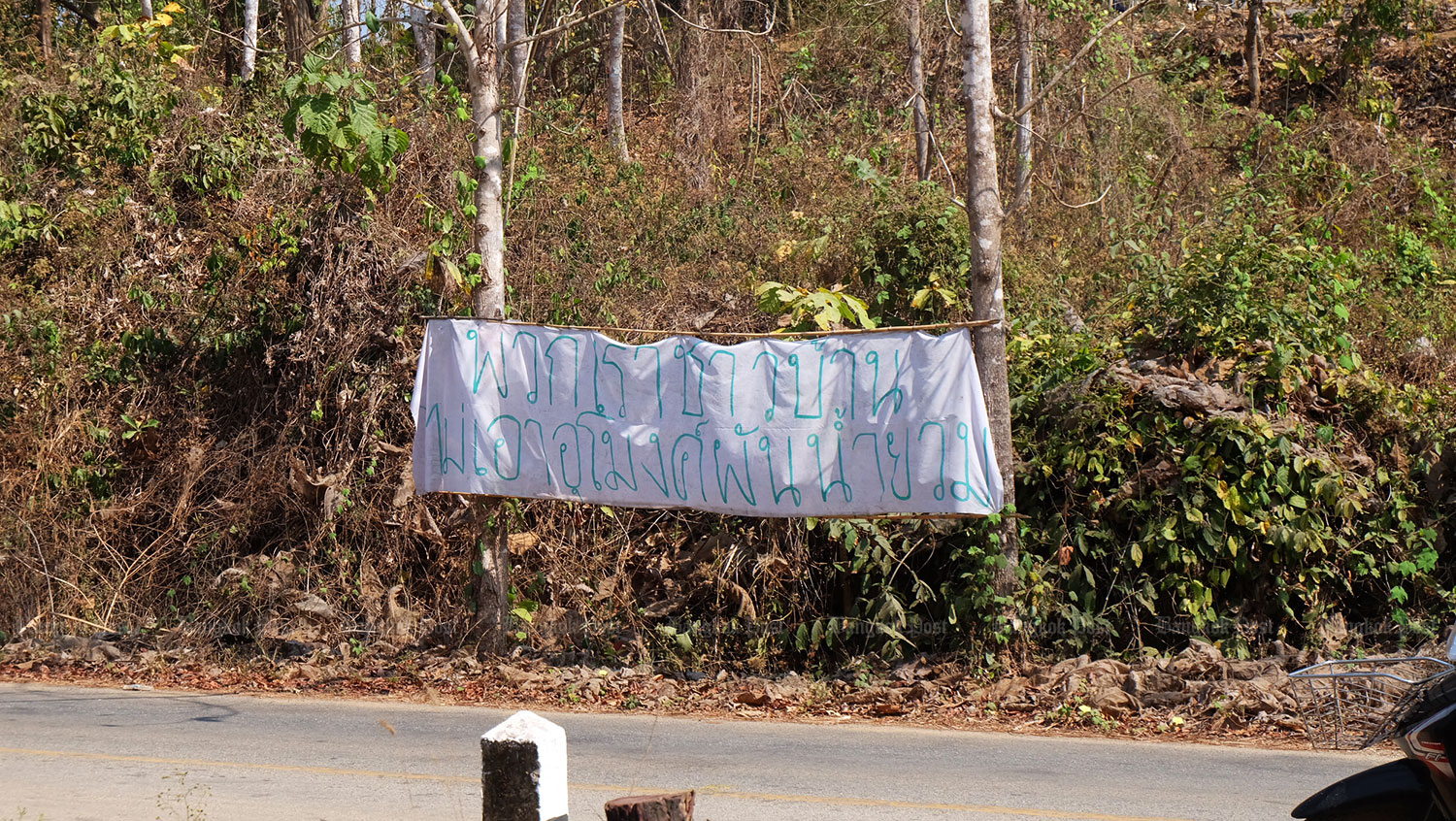 A banner is hung between the trees with a message opposing the project. The banner reads ‘We don’t want the water diversion tunnel’.

"After a child is born, a parent will cut his umbilical cord, put it in a bamboo container and hang it on a tree as a symbol of the child's life," he said.

"If you cut the tree, you cut the child's life. In a way, it can be seen as a ploy to preserve the forest."

The practice is said to have its roots in a legend. Once upon a time, a woman gave birth to a boy by the river. She used a sharpened bamboo to cut the baby's umbilical cord off and tossed everything on to a nearby tree.

As the boy grew up, he felt strangely attached to the tree. One day, a giant invaded his village, so the boy hid himself up in the tree, which saved his life. Since then, local villagers believe that the tree played a role in shielding the boy from danger, so the practice of hanging severed umbilical cords continues to this day.

"We respect the river because it can both give and take away human life. Nature isn't 'empty' -- it has a life and a spirit," he said.

Hannarong Yaowalers, the president of Thai Water Partnership, said the dam is a risky investment given that the project's rate of return is calculated over the course of 50 years.

"As a rule of thumb, a reservoir which holds less than two billion cubic metres of water shouldn't cost more than 15 billion baht. This dam costs 70.7 billion baht, so it doesn't look promising at all," he said.

"One must consider operations and maintenance costs. If one unit of water ends up being too costly, who will shoulder the financial burden?"

Furthermore, Mr Hannarong said the project fails to address the main cause of water shortages at Bhumibol Dam. 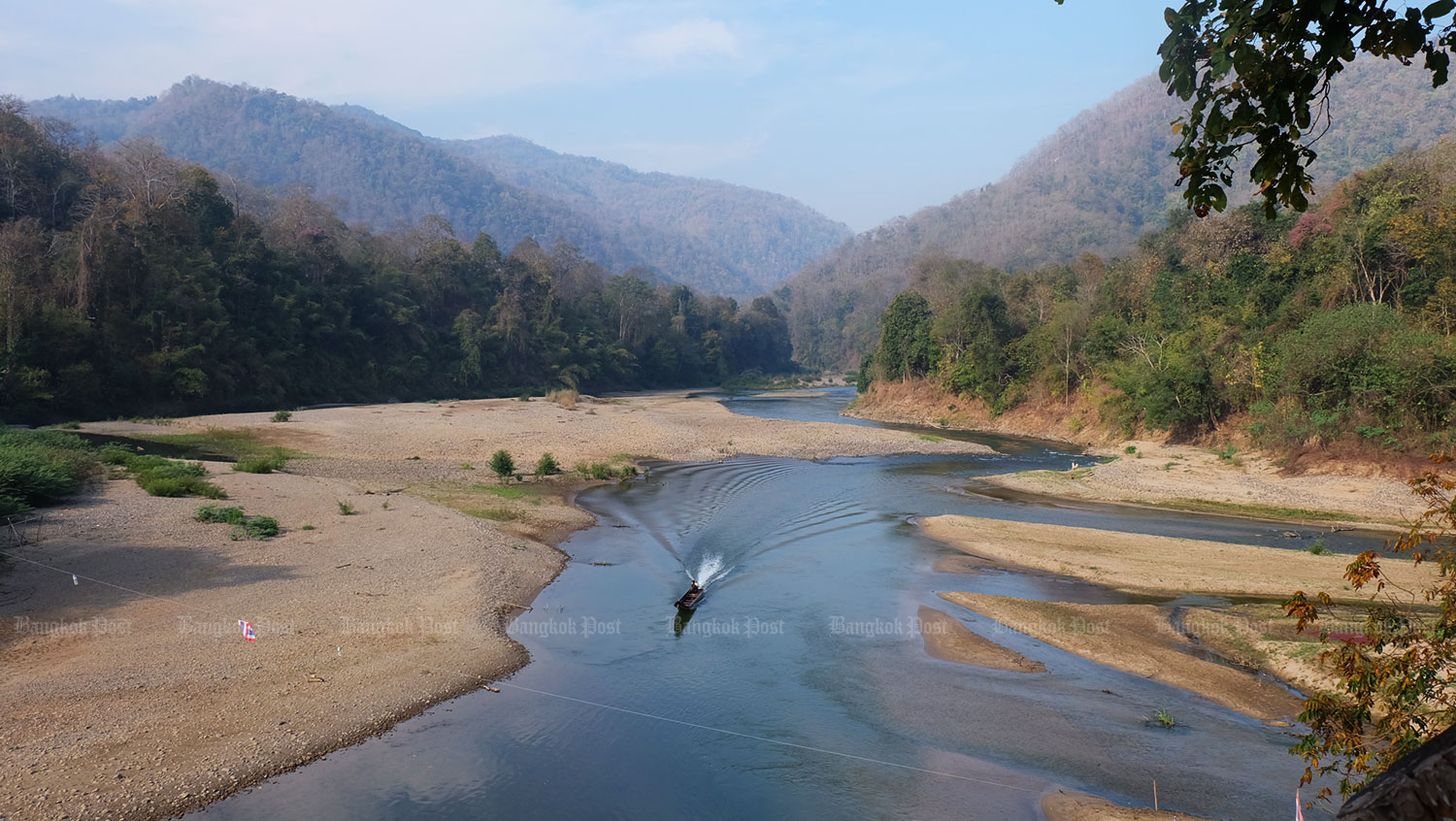 A motorboat sails up the Yuam River where the water level has fallen in recent years.

Pianporn Deetes, the Thailand and Myanmar campaign director for International Rivers, said the shortage is caused by deforestation and growing consumption in urban areas as well as by the agricultural sector.

"Developers want to divert this 'excess' water from Myanmar [to the Bhumibol Dam]. They don't think about the impact on the entire ecosystem. You cannot see water just as H²O molecules," she said.

Ms Pianporn urged the RID to assess all options thoroughly, citing the criterion of the World Commission on Dams.

"The most reasonable solution is to reduce our water consumption. Diverting water is an option, but those affected by the project must be fully informed of the consequences," she said.

"Chiang Mai, Lamphun and Lampang are rapidly expanding and using a lot of water. The diversion will help cater to growing demand over the next two decades," he said.

"I agree that all sectors must reduce their water consumption, but the project will be able to provide a massive amount of water for all sectors," he said.

Pichate Suprarerk, the director of the Bureau of Engineering and Architectural Design, said the dam will be able to funnel a great deal of water with minimal environmental impact.

"It won't harm the flow of the river and its ecosystem. It is like building two Pasak Jolasid dams," he said. "Some forest areas might be damaged. However, it will also bring considerable benefits."