Slum-dwelling parents ponder the future of their children

Hard times: Malee Boonmee, 49, and her 10-year-old adopted son Nong Pi have been hit by the lockdown, after Ms Malee lost her job. Her family now has no income and she doesn't know how she will support the education of her two sons when schools reopen in July.

The new coronavirus disease pandemic has shaken the lives of everyone. Among those who are suffering most are children whose parents have lost their jobs amid the Covid-19 lockdowns and parents who want to see their offspring grow up with a good education.

Because of the pandemic, many businesses have closed temporarily or scaled back operations, resulting in temporary unemployment and salary cuts to millions of workers.

The impact of the pandemic on low-income families is disturbing. Less fortunate families struggle economically even when times are normal. Now that the pandemic is here, their financial situation has gone from bad to worse, with their children's education also suffering disruption.

Families living in Bangkok's Klong Toey slum, one of the largest low-income communities in the capital, are an example of these vulnerable groups affected by the global Covid-19 pandemic.

They understand education is key to success as it plays a significant role in their children's chances in life.

"I have three children. Two of them are still in school," Malee Boonmee, whose family lives in Klong Toey, told the Bangkok Post. "To feed them on no wages is impossible."

Ms Malee said she used to teach underprivileged children living in the slum area, but the Child Development Centre, her former employer, was ordered to close by the Bangkok Metropolitan Administration (BMA).

The 49-year-old has been unemployed for about one month.

"Since the child centre was closed, the BMA has not paid teacher salaries," she said. "Instead, I was told to apply for unemployment benefits at the Social Security Office. I have yet to receive any money."

Under Section 33 of the Social Security Act, citizens forced to stop working will be given 62% of their daily wages based on a maximum monthly salary of 15,000 baht for a maximum of 90 days.

"My salary was 8,600 baht, this means I must receive approximately 5,300 baht in compensation when [the application] is approved," she said.

Ms Malee's husband, eldest daughter and son-in-law also lost their jobs because of the Covid-19 pandemic.

"My husband was a driver at private company, while my oldest daughter and son-in-law were security guards," she said. "They were by their employers to stop working until their companies can operate again.

"This means our family now has no income left to support itself," Ms Malee added. "We still have to eat, pay rent and utility bills."

She said what worries her the most is that she may not be able to pay for the education of her two boys when schools reopen in July.

"We don't know how long the threat of Covid-19 will last and we also don't know whether or not we will be rehired," Ms Malee said. "My second child is now studying in a vocational college.

"I am also worried about my youngest son, whom I adopted when he was just a baby. He is now 10 years old," she added. "I worry about their future the most.

"Without a proper degree, I'm afraid my sons will end up living in the slum, earning only minimum wages their whole lives like my husband and I," Ms Malee said.

Nong Pi, Ms Malee's 10-year-old son, understands what his mother is going through.

"I feel sorry for my parents, who need to work hard to support my brother and I so we can go to school," Nong Pi said.

"I will study hard when the new semester starts, so I can earn enough money to take a good care of them when I grow up," he added.

Not far from Ms Malee's modest house, Umporn Maiprakon, another resident of Klong Toey, said she is worried about the future of her 17-year-old son, who is now living with his grandparents in the provinces. 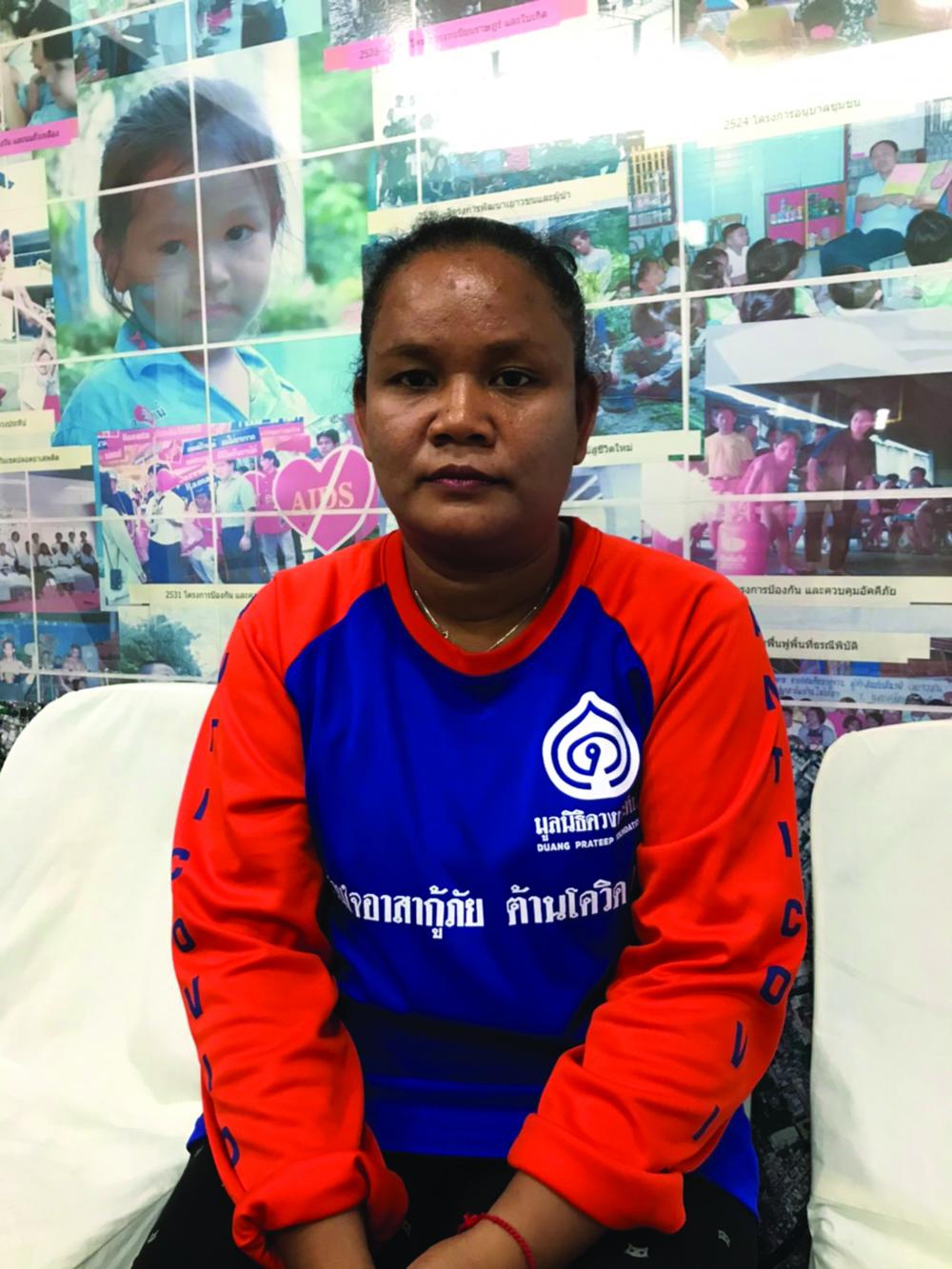 "My parents and my son relied on the money I sent to them every month, but now my husband and I are out of work. The garage in Siam Paragon, where we used to work, has closed," Ms Umporn said. "We don't know yet how we'll be able to earn money to support them this month," the 42-year-old said.

Without an income, Ms Umporn said she had to borrow from relatives and neighbours so her family can survive.

"My son recently told me he wants to study in a university. I don't know if that will be possible now. I cry myself to sleep every night," she said. 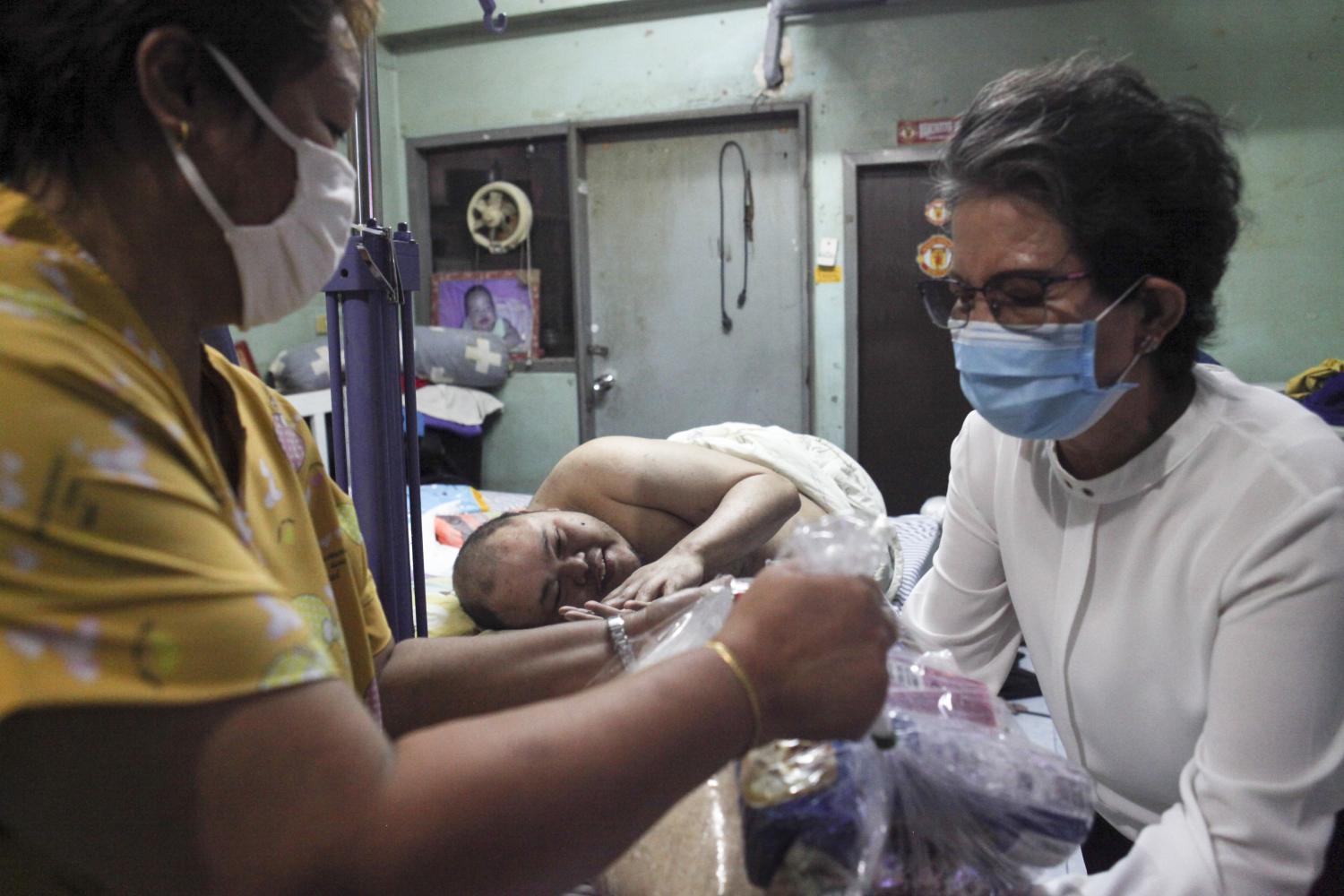 relief at hand: Prateep Ungsongtham Hata, founder of the Duang Prateep Foundation, gives out necessities to a family affected by the Covid-19 at a Klong Toey slum. Her foundation also supports many underprivileged kids in education.

Ms Prateep said most people living in Klong Toey are daily wage workers who work in various sectors including hotels, public transport, and as street vendors.

"They live from hand to mouth," she said.

"When the government announced the closure of shopping malls, entertainment outlets, salons and massage parlours, about 60% of the people here lost their job and income."

Ms Prateep said the foundation -- established more than 40 years ago to give underprivileged children in Klong Toey a chance to go to school -- has been working with at least five non-governmental organisations (NGOs) and volunteer groups to provide basic items including masks, hand sanitiser, soap and canned goods.

"Low-income families tend to be the first hit when things go wrong and then also to take the longest time to recover," she said.

"We can't leave them behind."

Ms Prateep said her foundation has distributed more than one thousand "survival packs" to alleviate the impact of Covid-19 on slum residents.

"We've also provided milk formula to parents with small children. It is particularly important for young children under the age of two years to have a nutritious diet to protect their immunity and ensure their future growth and development," she said.

For school children, Ms Prateep said the foundation will help by finding scholarships for them.

DPF's education sponsorship programme is helping over 2,300 young people from impoverished families to join the state education system. Most live in the Klong Toey. 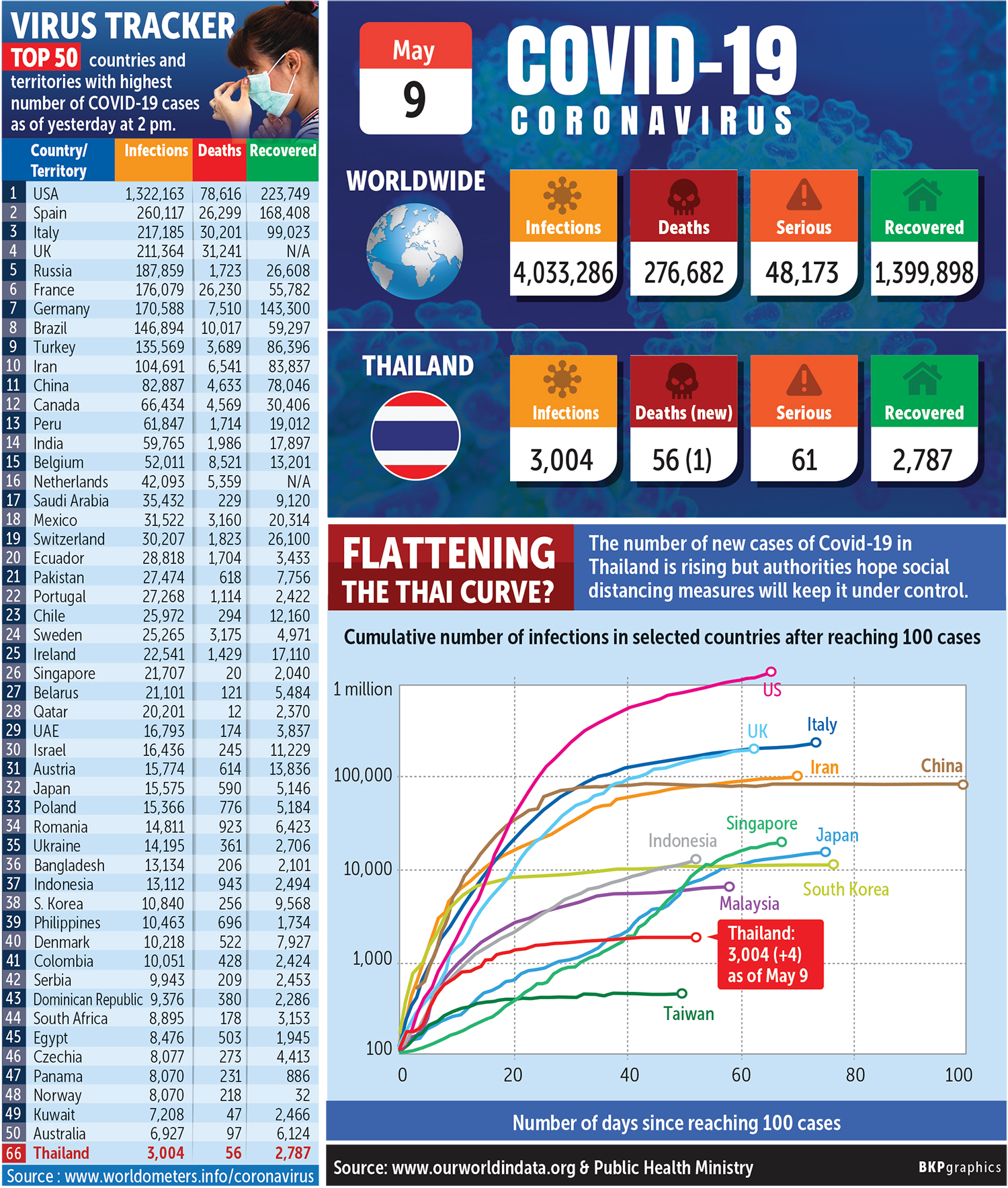 The Equitable Education Fund (EEF), an independent agency, reported that over 700,000 children from the lower socio-economic class across the kingdom face a similar fate to their peers in Klong Toey and urgently need help.

The EEF is expediting the disbursement of 3,000 baht in subsidies per student, originally earmarked for the upcoming semester, for 711,536 vulnerable children and youth in 27,805 schools.

The fund will also hike grants for at least 40,000 pre-kindergarten students from impoverished households in schools under local administrative offices.

Supakorn Buasai, managing director of EEF, said these students are at risk of health and economic degradation, adding their families live from one pay day to another.

About 22% of their wages go toward the education of their children. The loss of earnings due to Covid-19 will only put added strain on their livelihoods.

Some 670,000 students are already missing out on formal education each year. That figure stands to rise in the next academic year, expected to start in July.

Meanwhile, Prof Somphong Chittradub, adviser to EEF, said there are up to 10,000 out-of-school children working in the streets of Bangkok, living from hand-to-mouth.

Prof Somphong said authorities have encouraged them to stay at home, which means they lose out on income. Worse yet, they live in crowded conditions and lack the protective gear to keep themselves safe.

Since they are in the bottom one-fifth of society, they often slip through the cracks of the state welfare system, he added.

The EEF recently partnered with the public sector and charities such as the Foundation for the Better Life of Children, in two intervention stages -- immediate and recovery.

The first stage involves providing relief bags with daily necessities and food to the children working in the streets of Bangkok. The second is about giving subsidies for their education.

A recent survey by the United Nations Children's Fund (Unicef) found that more than eight in 10 young people admitted they were worried about economic insecurity in their homes due to the pandemic.

Another big stress factor is the uncertainty surrounding their ability to continue learning and being adequately prepared for future employment.

"This survey shows how Covid-19 pandemic has far-reaching negative effects on children and young people beyond the threat of the virus," said Thomas Davin, a representative for Unicef Thailand.

"Stress, anxiety and uncertainly affect not only adults but also young people impacted greatly by the current situation.

"Vulnerable families are struggling to cope with the crisis. Some don't even have enough money to put food on the table for their children," Mr Davin added.

"Without proper measures in place to address these issues, children and young people will fall through the cracks or be stuck in a prolonged vicious cycle."

Renaud Meyer, Resident Representative of the United Nations Development Programme said: "The Covid-19 pandemic is more than a health crisis and has significant socio-economic impacts that, while affecting everyone, are more seriously felt by vulnerable groups such as children and youth."

Mr Meyer added: "Supporting youth is therefore much needed to not only ensure they are protected from Covid-19 but are also further empowered to contribute to the Covid-19 response and to design a more sustainable, inclusive and resilient post-Covid society."